In this paper, we introduce a new kernel function which differs from previous functions, and play an important role for generating a new design of primal-dual interior point algorithms for semidefinite linear complementarity problem. Its properties, allow us a great simplicity for the analysis of interior-point method, therefore the complexity of large-update primal-dual interior point is the best so far. Numerical tests have shown that the use of this function gave a big improvement in the results concerning the time and the number of iterations. so is well promising and perform well enough in practice in comparison with some other existing results in the literature. 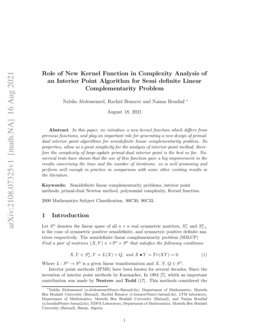 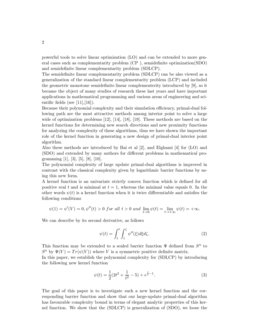 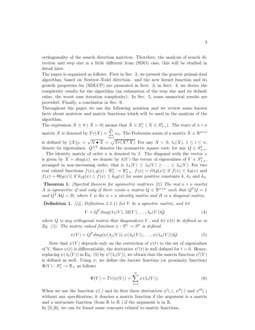 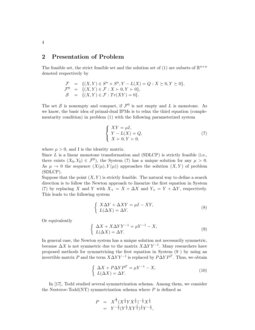 We give tight bounds on the relation between the primal and dual of vari...
Pieter Kleer, et al. ∙

We focus on the problem of finding a non-linear classification function ...
Aaditya Ramdas, et al. ∙

Improving and benchmarking of algorithms for decision making with lower previsions

is a given linear transformation and

Interior point methods (IPMS) have been known for several decades, Since the invention of interior point methods by Karmarker, In 1984 [7], whith an important contribution was made by Nestrov and Todd [17]. This methods considered the powerful tools to solve linear optimization (LO) and can be extended to more general cases such as complementarity problem (CP ), semidefinite optimization(SDO) and semidefinite linear complementarity problem (SDLCP). The semidefinite linear complementarity problem (SDLCP) can be also viewed as a generalization of the standard linear complementarity problem (LCP) and included the geometric monotone semidefinite linear complementerity introduced by [9], so it became the object of many studies of research these last years and have important applications in mathematical programming and various areas of engineering and scientific fields (see [11],[16]). Because their polynomial complexity and their simulation efficiency, primal-dual following path are the most attractive methods among interior point to solve a large wide of optimization problems [12], [14], [18], [19]. These methods are based on the kernel functions for determining new search directions and new proximity functions for analyzing the complexity of these algorithms, thus we have shown the important role of the kernel function in generating a new design of primal-dual interior point algorithm. Also these methods are introduced by Bai et al [2], and Elghami [4] for (LO) and (SDO) and extended by many authors for different problems in mathematical programming [1], [3], [5], [8], [10]. The polynomial complexity of large update primal-dual algorithms is improved in contrast with the classical complexity given by logarithmic barrier functions by using this new form. A kernel function is an univariate strictly convex function which is defined for all positive real t and is minimal at t=1, whereas the minimal value equals 0. In the other words ψ(t) is a kernel function when it is twice differentiable and satisfies the following conditions

We can describe by its second derivative, as follows

This function may be extended to a scaled barrier function Ψ defined from Sn to Sn by Ψ(V)=Tr(ψ(V)) where V is a symmetric positive definite matrix. In this paper, we establish the polynomial complexity for (SDLCP) by introducing the following new kernel function

The goal of this paper is to investigate such a new kernel function and the corresponding barrier function and show that our large-update primal-dual algorithm has favourable complexity bound in terms of elegant analytic properties of this kernel function. We show that the (SDLCP) is generalization of (SDO), we loose the orthogonality of the search direction matrices. Therefore, the analysis of search direction and step size is a little different from (SDO) case, this will be studied in detail later.

The paper is organized as follows. First in Sec. 2, we present the generic primal-dual algorithm, based on Nestrov-Todd direction. and the new kernel function and its growth properties for (SDLCP) are presented in Sect. 3, in Sect. 4, we derive the complexity results for the algorithm (an estimation of the step size and its default value, the worst case iteration complexity). In Sec. 5, some numerical results are provided. Finally, a conclusion in Sec. 6.

Throughout the paper we use the following notation and we review some known facts about matrices and matrix functions which will be used in the analysis of the algorithm. The expression X⪰0 ( X≻0) means that X∈Sn+ ( X∈Sn++). The trace of n×n matrix X is denoted by Tr(X)=n∑i=1xii. The Frobenius norm of a matrix X∈Rn×n is defined by ∥X∥F=√X∙X=√Tr(XTX). For any X≻0, λi(X), 1≤i≤n

Q1/2 denotes the symmetric square root, for any Q∈Sn++

, . The identity matrix of order

n is denoted by I

. The diagonal with the vector

(Spectral theorem for symmetric matrices [2]) The real n×n martix A is symmetric if and only if there exists a matrix Q∈Rn×n such that QTQ=I and QTAQ=B, where I is the n×n identity matrix and B is a diagonal matrix.

is any orthogonal matrix that diagonalizes

V, and let ψ(t) be defined as in Eq. (3). The matrix valued function ψ:Sn→Sn is defined

Note that ψ(V) depends only on the restriction of ψ(t) to the set of eigenvalues of V. Since ψ(t) is differentiable, the derivative ψ′(t) is well defined for t>0. Hence, replacing ψ(λi(V)) in Eq. (5) by ψ′(λi(V)), we obtain that the matrix function ψ′(V) is defined as well. Using ψ, we define the barrier function (or proximity function) Ψ(V):Sn+→R+ as follows

The feasible set, the strict feasible set and the solution set of (1) are subsets of Rn×n denoted respectively by

The set S is nonempty and compact, if F0 is not empty and L is monotone. As we know, the basic idea of primal-dual IPMs is to relax the third equation (complementarity condition) in problem (1) with the following parameterized system

where μ>0, and I is the identity matrix. Since L is a linear monotone transformation and (SDLCP) is strictly feasible (i.e., there exists (X0,Y0)∈F0), the System (7) has a unique solution for any μ>0. As μ→0 the sequence (X(μ),Y(μ)) approaches the solution (X,Y) of problem (SDLCP). Suppose that the point (X,Y) is strictly feasible. The natural way to define a search direction is to follow the Newton approach to linearize the first equation in System (7) by replacing X and Y with X+=X+ΔX and Y+=Y+ΔY, respectively. This leads to the following system

In general case, the Newton system has a unique solution not necessarily symmetric, because ΔX is not symmetric due to the matrix XΔYY−1. Many researchers have proposed methods for symmetrizing the first equation in System (9

) by using an invertible matrix

P and the term XΔYY−1 is replaced by PΔYPT. Thus, we obtain

Let D=P12 where P12 denotes the symmetric square root of P. The matrix D can be used to scale X and Y to the same matrix V defined by

Note that the matrix V and D are symmetric and positive definite. Let us further define

The linear transformation ~L is also monotone on Sn. Under our hypothesis the new linear System (14) has a unique symmetric solution (DX,DY). These directions are not orthogonal, because

thus, it is only difference between SDO and SDLCP problem. So far, we have described the schema that defines classical NT-direction. Now following [4, 11, 12] and [18], we replace the right hand side of the first equation in System(14) by −ψ′(V). Thus we will use the following system to define new search directions

The new search directions DX and DY are obtained by solving System (15), so that ΔX and ΔY are computed via Eq.(13). By taking along the search directions with a step size α defined by some line search rules, we can construct a new couple (X+,Y+) according to X+=X+αΔX and Y+=Y+αΔY.

In this part, we present the new kernel function and we give those properties that are crucial in our complexity analysis. Let

We list the first three derivatives of ψ as below

Now let as define the proximity measure δ(V) as follows

For ψ(t), we have the following

ψ(t) is exponential convex, for all t>0,

4.1 An estimation of the step size

The aim of this paper is to define a new kernel function, and to obtain new complexity results for an (SDLCP) problem, during an inner iteration, we compute a default step size α, and the decrease of the proximity function. After an inner iteration, new iterates X+=X+αΔX=√μD(V+αDX)Dand Y+=Y+αΔY=√μD−1(V+αDY)D−1 are generated, where α is the step size and DX, DY and D are defined by (13). On the other hand, from (11), we have V2+=(V+αDX)(V+αDY) and it is clear that the matrix V2+ is similar to the matrix (V+αDX)12(V+αDY)(V+αDX)12. By assuming that (V+αDX)≻0 and (V+αDY)≻0 for such feasible step size α and we deduce that they have the same eigenvalues. Since the proximity after one step is defined by :

In what follows, we use the short notation δ(V):=δ

Then we have the following lemmas to obtain the upper bound for the decreasing value of the proximity in the inner iteration.

Let K be the total number of inner iterations in the outer iteration. Then we have

Now, we estimate the total number of iterations of our algorithm.

If τ≥1, the total number of iterations is not more than

The main purpose of this section is to present three monotone SDLCPs for testing the effectiveness of algorithm. The implementation is manipulated in ”Matlab”. Here we use ”inn”, ”out” and ”T” which means the inner, outer iterations number and the time produced by the algorithm 1, respectively. The choice of different values of the parameters shows their effect on reducing the number of iterations.

The first example is the monotone SDLCP defined by two sided multiplicative linear transformation [1] . The second is monotone SDLCP which is equivalent to the symmetric semidefinite least squares(SDLS)problem and the third one is reformulated from nonsymmetric semidefinite least squares(NS-SDLS)problem [10], in the second and third example, L is Lyaponov linear transformation.

The data of the monotone SDLCP is given by L(X)=AXAT, where

The number of inner, outer iterations and the time for several choices of α, θ and μ obtained by algorithm 1 are presented in the following tables