The maximum correntropy criterion (MCC) has recently been successfully applied in robust regression, classification and adaptive filtering, where the correntropy is maximized instead of minimizing the well-known mean square error (MSE) to improve the robustness with respect to outliers (or impulsive noises). Considerable efforts have been devoted to develop various robust adaptive algorithms under MCC, but so far little insight has been gained as to how the optimal solution will be affected by outliers. In this work, we study this problem in the context of parameter estimation for a simple linear errors-in-variables (EIV) model where all variables are scalar. Under certain conditions, we derive an upper bound on the absolute value of the estimation error and show that the optimal solution under MCC can be very close to the true value of the unknown parameter even with outliers (whose values can be arbitrarily large) in both input and output variables. Illustrative examples are presented to verify and clarify the theory. 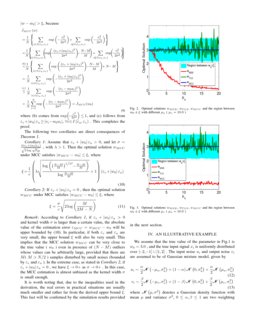 In this paper, we propose a sparse signal estimation algorithm that is s...
Chongwen Huang, et al. ∙

Supplementary Material for CDC Submission No. 1461

In this paper, we focus on the influences of the condition number of the...
Yue Ju, et al. ∙

We study the problem of robustly estimating the mean of a d-dimensional ...
Lunjia Hu, et al. ∙

Second order statistical measures (e.g. MSE, variance, correlation, etc.) are most widely used in machine learning, signal processing and control applications due to their simplicity and efficiency. The learning performances with these measures will, however, deteriorate dramatically when the data contain outliers (which significantly deviate from the bulk of data). Robust statistical measures against outliers (or impulsive noises) are thus of great practical interests, among which the fractional lower order moments (FLOMs)

Up to now, many adaptive algorithms (gradient based, fixed-point based, half-quadratic based, etc.) under MCC have been developed to improve the learning performance in presence of outliers[13, 14, 15, 16, 17, 18, 19, 20, 21, 22, 23]. However, so far little insight has been gained regarding the impact of outliers on the optimal solution under MCC. In the present work, we will attempt to study this problem in order to get a better understanding of the robustness of MCC criterion. To simplify the analysis, we focus on the problem of parameter estimation for a simple linear errors-in-variables (EIV) model [28] in which all variables are scalar. Under certain conditions, we derive an upper bound on the absolute value of the estimation error. Based on the derived results, we may conclude that the optimal estimate under MCC can be very close to the true value of the unknown parameter even in presence of outliers (whose values can be arbitrarily large) in both input and output variables.

The rest of the paper is organized as follows. In section II, we describe the problem under consideration. In section III, we derive the main results. In section IV, we present illustrative examples, and in section V we give the conclusion.

where vi denotes the output (observation) noise. In addition, w is the model’s parameter, and ~xi=xi+ui is the observed input in which ui stands for the input noise. In general, both vi and ui are assumed to be independent of xi. The model’s output yi is given by

Our goal is thus to determine the value of w such that it is as close to w0 as possible. A simple approach is to solve w by minimizing the MSE, that is,

where e=d−y is the error between observed output and model output, E[⋅] denotes the expectation operator, and wMSE stands for the optimal solution under MSE. However, the above solution usually leads to inconsistent estimate, i.e. the parameter estimate does not tend to the true value even with very large samples. Some sophisticated methods such as total least squares (TLS) [29, 30, 31, 32, 33, 34]

may give an unbiased estimate, but prior knowledge has to be used and the computational cost is also relatively high.

Another approach is based on the MCC. In this way the model parameter w is determined by [9, 10, 11]

where JMCC(w)=E[exp(−e22σ2)] is the correntropy between d and y , with σ>0 being the kernel bandwidth, and wMCC denotes the corresponding optimal solution. Note that the kernel width σ is a key free parameter in MCC, which controls the robustness of the estimator. When the kernel width is very large, the MCC will be approximately equivalent to the MSE criterion. In most practical situations, however, the error distribution is usually unknown, and one has to use the sample mean to approximate the expected value. Given N observed input-output samples {~xi,di}Ni=1 , the MCC estimation can be solved by

is the sample mean estimator of correntropy. Throughout this paper, our notation does not distinguish between random variables and their realizations, which should be clear from the context. It is worth noting that in practical applications, the empirical approximation in (5) is often used as the optimization cost although it does not necessarily approach the expected value when samples go infinite.

The non-concave optimization problem in (5) has no closed-form solution but can be effectively solved by using some iterative algorithms such as gradient based methods [17, 18], fixed-point methods [22, 25], half-quadratic methods [14, 15, 16]

, or evolutionary algorithms such as estimation of distribution algorithm (EDA)

Remark 1: The Assumption 1 means that there are M ( more than N2 ) samples in which the amplitudes of the input and output noises satisfy |ui|≤εu,|vi|≤εv, and N−M (at least one) samples that may contain large outliers with |ui|>εu or |vi|>εv (possibly |ui|≫εu or |vi|≫εv ). The Assumption 2 is reasonable since for a finite number of samples, the minimum amplitude is in general larger than zero.

With the above notations and assumptions, the following theorem holds:

The following two corollaries are direct consequences of Theorem 1.

Corollary 2: If εv+|w0|εu=0 , then the optimal solution wMCC under MCC satisfies |wMCC−w0|≤ξ, where

Remark 2: According to Corollary 1, if εv+|w0|εu>0 and kernel width σ is larger than a certain value, the absolute value of the estimation error εMCC=wMCC−w0 will be upper bounded by (10). In particular, if both εv and εu are very small, the upper bound ξ will also be very small. This implies that the MCC solution wMCC can be very close to the true value ( w0 ) even in presence of (N−M) outliers whose values can be arbitrarily large, provided that there are M( M>N/N22 ) samples disturbed by small noises (bounded by εv and εu ). In the extreme case, as stated in Corollary 2, if εv+|w0|εu=0 , we have ξ→0+ as σ→0+ . In this case, the MCC estimation is almost unbiased as the kernel width σ is small enough.

It is worth noting that, due to the inequalities used in the derivation, the real errors in practical situations are usually much smaller and rather far from the derived upper bound ξ. This fact will be confirmed by the simulation results provided in the next section.

Remark 3: Although the analysis results in this paper cannot be applied directly to improve the estimation performance in practice, they explain clearly why and how the MCC estimation is robust with respect to outliers especially those with large amplitudes. In addition, according to Theorem 1 and Corollary 1-2, the kernel bandwidth σ plays an important role in MCC, which should be set to a proper value (possibly close to the threshold εv+|w0|εu√2logMN−M ) so as to achieve the best performance. How to optimize the bandwidth σ in practice is however a very complicated problem and is left open in this work.

We assume that the true value of the parameter in Fig.1 is w0=3.0 , and the true input signal xi

are assumed to be of Gaussian mixture model, given by

where N(μ,σ2) denotes a Gaussian density function with mean μ and variance σ2, 0≤α,β≤1 are two weighting factors that control the proportions of the outliers (located around ±μu or ±μv ) in the observed input and output signals. In the simulations below, without mentioned otherwise the variances are σ2u=σ2v=0.001, and the weighting factors are set to α=β=0.15 . The MCC solutions are solved by using the estimation of distribution algorithm (EDA)[35, 36, 37].

Second, we show how the solutions will be affected by the outliers’ occurrence probabilities (namely

α and β). Fig. 4 illustrates the optimal solutions under MSE, LAD, TLS and MCC with different α, where other parameters are set to β=α and μu=μv=5.0. As one can see, the MCC solution will be very close to the true value (almost unbiased) when α is smaller than a certain value, although it will get worse dramatically, going far from the true value as α is further increased. The MSE, LAD and TLS solutions, however, will get worse with α increasing, even when α is very small (namely, the outliers are very sparse). Notice that if α is too large, the Assumption 1 may not hold and the derived upper bound will be inapplicable.

Further, we illustrate in Fig. 5 the optimal solutions under MSE and MCC with different kernel widths ( σ ), where μu and μv are μu=μv=5.0. As expected, the MCC solution will approach the MSE solution as the kernel width is increased. In order to keep the robustness against large outliers, the kernel width in MCC should be set to a relatively small value in general.

The problem considered in this study is that of estimating a simple EIV model with only one unknown parameter. It is very important to extend the current results to multi-dimensional dynamic case. This is, however, not straightforward since the inequality (a) in (7) does not hold for multi-dimensional case. Here, we present a simulation study for such case and our simulation results suggest that a dynamic EIV model can also be robustly estimated by MCC. Let’s consider a 9-taped FIR system with weight vector

{w}0=[0.1,0.2,0.3,0.4,0.5,0.4,0.3,0.2,0.1]. The true input signal xi is zero-mean Gaussian with variance 1.0 and the distribution models of the input and output noises are assumed to be the same as those in the previous example. In the simulation, the variances are σ2u=σ2v=0.01, the weighting factors are α=β=0.3 and 2000 i.i.d samples {~xi,di} are generated. The squared weight error norm ∥∥{w}−{w}0∥∥2 of MSE, LAD, TLS and MCC with different amplitudes of input and output outliers are presented in Fig.6 (μu is fixed at 2.0) and Fig.7 (μv is fixed at 5.0). From Fig.6 and Fig.7, one can see that the squared weight error norm of MCC is very small and little affected by both input and output outliers, while other methods are sensitive to outliers, especially, to input outliers.

We investigated in this work the robustness of the maximum correntropy criterion against large outliers, in the context of parameter estimation for a simple linear errors-in-variables (EIV) model where all variables are scalar. Under certain conditions, we derived an upper bound on the amplitude of the estimation error. The obtained results suggest that the MCC estimation can be very close to the true value of the unknown parameter even with outliers (whose values can be arbitrarily large) in both input and output variables. The analysis results have been verified by illustrative examples. Extending the results of this study from simple EIV model to multivariable case is however not straightforward. This remains a challenge for future study.