As deep neural networks (DNNs) are applied to increasingly challenging problems, they will need to be able to represent their own uncertainty. Modeling uncertainty is one of the key features of Bayesian methods. Using Bernoulli dropout with sampling at prediction time has recently been proposed as an efficient and well performing variational inference method for DNNs. However, sampling from other multiplicative noise based variational distributions has not been investigated in depth. We evaluated Bayesian DNNs trained with Bernoulli or Gaussian multiplicative masking of either the units (dropout) or the weights (dropconnect). We tested the calibration of the probabilistic predictions of Bayesian convolutional neural networks (CNNs) on MNIST and CIFAR-10. Sampling at prediction time increased the calibration of the DNNs' probabalistic predictions. Sampling weights, whether Gaussian or Bernoulli, led to more robust representation of uncertainty compared to sampling of units. However, using either Gaussian or Bernoulli dropout led to increased test set classification accuracy. Based on these findings we used both Bernoulli dropout and Gaussian dropconnect concurrently, which we show approximates the use of a spike-and-slab variational distribution without increasing the number of learned parameters. We found that spike-and-slab sampling had higher test set performance than Gaussian dropconnect and more robustly represented its uncertainty compared to Bernoulli dropout. 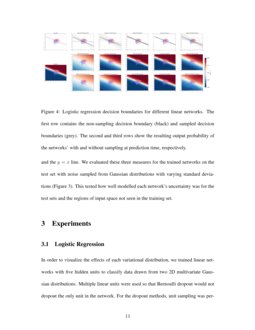 Deep neural networks (DNNs), particularly convolutional neural networks (CNNs), have recently been used to solve complex perceptual and decision tasks [15; 21; 23]. While these models take into account aleatoric uncertainty via their softmax output (i.e. the uncertainty present in the training data), they do not take into account epistemic uncertainty (i.e. parameter uncertainty) [12]. Bayesian DNNs attempt to learn a distribution over their parameters thereby allowing for the computation of the uncertainty of their outputs given the parameters. However, ideal Bayesian methods do not scale well due to the difficulty in computing the posterior of a network’s parameters.

As a result, several approximate Bayesian methods have been proposed for DNNs. Using the Laplace approximation was proposed by [18]

. Using Markov chain Monte Carlo (MCMC) has been suggested to estimate the posterior of the networks weights given the training data

[22; 26] . Using expectation propagation has also been proposed [11; 8]. However, these methods can be difficult to implement for the very large CNNs commonly used for object recognition. Variational inference methods have also been used to make Bayesian NNs more tractable[9; 1; 7; 2]. Due in large part to the fact that these methods substantially increase the number of parameters in a network, they have not been extensively applied to large DNNs. Gal and Ghahramani [5] and Kingma et al. [13] bypassed this issue by developing Bayesian CNNs using Bernoulli and Gaussian dropout [24], respectively. While independent weight sampling with additive Gaussian noise has been investigated [9; 1; 7; 2], independently sampling weights using multiplicative Bernoulli noise, i.e. dropconnect [25], or independently sampled multiplicative Gaussian noise has not been thoroughly evaluated.

In addition to Bernoulli and Gaussian distributions, spike-and-slab distributions, a combination of the two, have been investigated, particularly for linear models

[20; 19; 6; 10]. Interestingly, Bernoulli dropout and dropconnect can be seen as approximations to spike-and-slab distributions for units and weights, respectively [17; 3]

. Spike-and-slab variational distributions have been implemented using Bernoulli dropout with additive weight noise sampled from a Gaussian with a learned standard deviation

[17]. This approach more than doubled the number of learned parameters, since the mean and the standard deviation of each weight as well as the dropout rate for each unit were learned. However, this method did not consistently outperform standard neural networks. Gal [3] also discussed motivations for spike-and-slab variational distributions, but did not suggest a practical implementation.

We evaluated the performance Bayesian CNNs with different variational distributions on MNIST [16] and CIFAR-10 [14]. We also investigate how adding Gaussian image noise with varying standard deviations to the test set affected each network’s learned uncertainty. We did this to test how networks responded to inputs not drawn from the data distribution used to create the training and test sets. We also propose an approximation of the spike-and-slab variational inference based on Bernoulli dropout and Gaussian dropconnect, which combines the advantages of Gaussian dropconnect and Bernoulli dropout sampling leading to better uncertainty estimates and good test set generalization without increasing the number of learned parameters.

DNNs are commonly trained by finding the maximum a posteriori (MAP) weights given the training data (Dtrain) and a prior over the weight matrix W, p(W). However, ideal Bayesian learning would involve computing the full posterior. This can be intractable due to both the difficulty in calculating p(Dtrain)

and in calculating the joint distribution of a large number of parameters. Instead,

p(W|Dtrain) can be approximated using a variational distribution q(W). This distribution is constructed to allow for easy generation of samples. The objective of variational inference is to optimize the variational parameters V so that the Kullblack-Leiber (KL) divergence between qV(W) and p(W|Dtrain) is minimized [9; 1; 7; 2]:

, results in the following loss function:

MC sampling can also be used to estimate the probability of test data:

V, the n×n connection matrix with an element for each connection between the n units in the network, by a mask ^M

, which is sampled from some probability distribution:

From this perspective, the difference between dropout and dropconnect, as well as Bernoulli and Gaussian methods, is simply the probability distribution used to generate the mask sample (Figure 1).

In Gaussian dropconnect and dropout, ^wi,j is sampled from a Gaussian distribution centered at variational parameter vi,j

. This is accomplished by sampling the multiplicative mask using Gaussian distributions with a mean of 1 and a variance of

σ2dc=p/(1−p), which matches the mean and variance of Bernoulli dropout when training time scaling is used [24]. In Gaussian dropconnect, each element of the mask is sampled independently, which results in ^mi,j∼N(1,σ2dc)

. In Gaussian dropout, each element in a row has the same random variable, so

^mi,∗∼N(1,σ2dc). It can be shown that using Gaussian dropconnect or dropout with L2-regularization leads to optimizing a stochastic lower-bound of the variational objective function (See Supplementary Material).

In order to visualize the effects of each variational distribution, we trained linear networks with five hidden units to classify data drawn from two 2D multivariate Gaussian distributions. Multiple linear units were used so that Bernoulli dropout would not dropout the only unit in the network. For the dropout methods, unit sampling was performed on the linear hidden layer. For the dropconnect methods, every weight was sampled. Dropout and dropconnect probabilities of

p=0.4 were used for each of these networks, except for the spike-and-slab dropconnect probability which was 0.2. In Figure 2, we show the decision boundaries learned by the various networks. Higher variability in the decision boundaries corresponds to higher uncertainty. All of the MC sampling methods predict with higher uncertainty as points become further away from the training data. This is particularly true for the dropconnect and spike-and-slab methods.

s were treated as network-wide hyperparameters. For L2-regularization, L2-coefficients of 1e-5 (MNIST) and 4e-5 (CIFAR-10) were used for all weights. No data augmentation was used for MNIST. Random horizontal flipping was used during CIFAR-10 training. We evaluated the trained CNNs using the original testing sets and using the testing images with added random Gaussian noise of increasing variance in order to test each network’s uncertainty for the regions of input space not seen in the training set.

While the dropout-based methods were the most accurate on the test-set (Table 1), as image noise was added they became increasingly worse compared to the dropconnect-based networks (Figure 3.a and 4.a). Sampling only consistently improved the accuracy for Bernoulli and spike-and-slab dropout. However, sampling did consistently improve the calibration of the networks as the image noise was increased (Figure 3.b and 4.b). For a given accuracy across each set of noisy test images, sampling also generally lead to better calibration (Figure 3.c, 4.c, and 5). (See Supplementary Material for the calibration plots.) Gaussian dropout led to the highest test set accuracy, but it also led to reduced robustness to noise. While slightly less accurate on the test set, Bernoulli dropout and spike-and-slab dropout were much more robust.

Seemingly contradictory results have been reported in the literature regarding CIFAR-10 and MC Bernoulli dropout. Gal and Ghahramani [4] found that standard Bernoulli dropout methods led to relatively inaccurate networks when dropout was used at every layer in a CNN, whereas MC sampling increased the accuracy of these networks. However, Srivastava et al. [24] found that using dropout at every layer led to increased generalization performance even without sampling at prediction time. In our CIFAR-10 experiments, but not our MNIST experiments, we have found that using sampling at prediction time makes networks more robust to high variance dropout. Using lower variance dropout results in standard and MC methods having similar accuracies, while using higher variance distributions results in MC inference outperforming standard methods (Figure 6). (See Supplementary Material for more results when using p=0.5.) These results indicate that Bernoulli or Gaussian dropout with MC sampling are less dependent on the exact value of p and can allow higher levels of dropout regularization to be used.

L2 regularization and Bernoulli dropout are widely used for regularization and routinely lead to increased testing accuracy. However, the uncertainty learned do not generalize well. However, performing approximate Bayesian inference via sampling during training and testing allowed CNNs to better model their uncertainty. Dropconnect-based CNNs performed worse on the unmodified test set, but were much more robust to deviations from the training distribution. On the other hand, dropout-based networks, particularly MC Gaussian dropout, performed well on the unmodified test set, but were not as robust. Using sampling and combining Bernoulli dropout and Gaussian dropconnect to approximate the use of spike-and-slab variational distributions lead to a CNN that performed better near the test set than the dropconnect methods and more robustly represented its uncertainty compared to the dropout methods.

The authors would like to thank Sergii Strelchuk, Charles Zheng, Yarin Gal, Richard Turner, and Aapo Hyvärinen for their comments on previous versions of the manuscript. This research was funded by the UK Medical Research Council (Programme MC-A060- 5PR20), by a European Research Council Starting Grant (ERC-2010-StG 261352), and by the Human Brain Project (EU grant 604102 ’Context-sensitive multisensory object recognition: a deep network model constrained by multi-level, multi-species data’).