Reconfigurable intelligent surface (RIS) or intelligent reflecting surface (IRS) has recently been envisioned as one of the most promising technologies in the future sixth-generation (6G) communications. In this paper, we consider the joint optimization of the transmit beamforming at the base station (BS) and the phase shifts at the RIS for an RIS-aided wireless communication system with both hardware impairments and imperfect channel state information (CSI). Specifically, we assume both the BS-user channel and the BS-RIS-user channel are imperfect due to the channel estimation error, and we consider the channel estimation error under the statistical CSI error model. Then, the transmit power of the BS is minimized, subject to the outage probability constraint and the unit-modulus constraints on the reflecting elements. By using Bernstein-type inequality and semidefinite relaxation (SDR) to reformulate the constraints, we transform the optimization problem into a semidefinite programming (SDP) problem. Numerical results show that the proposed robust design algorithm can ensure communication quality of the user in the presence of both hardware impairments and imperfect CSI. 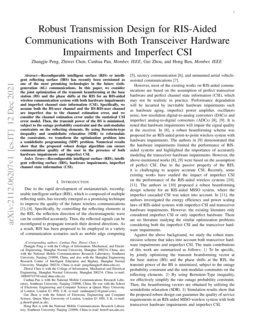 In this paper, we investigate the design of robust and secure transmissi...
Sheng Hong, et al. ∙

Due to the rapid development of metamaterials, reconfigurable intelligent surface (RIS), which is composed of multiple reflecting units, has recently emerged as a promising technique to improve the quality of the future wireless communications[9318531, 9366346, 8811733, 9558795]. Specifically, by controlling the reflecting elements at the RIS, the reflection direction of the electromagnetic wave can be controlled accurately. Then, the reflected signals can be reconfigured to propagate towards their desired directions. As a result, RIS has been proposed to be employed in a variety of communication scenarios such as mobile edge computing[9133107], secrecy communication[9201173], and unmanned aerial vehicle-assisted communications[9367288].

Against the above background, we study the robust transmission scheme that takes into account both transceiver hardware impairments and imperfect CSI. The main contributions of this work are summarized as follows: 1)

To be specific, by jointly optimizing the transmit beamforming vector at the base station (BS) and the phase shifts at the RIS, the transmit power of the BS is minimized, subject to the outage probability constraint and the unit-modulus constraints on the reflecting elements.

2) By using Bernstein-Type inequality, we effectively simplify the rate outage probability constraint. Then, the beamforming vectors are obtained by utilizing the semidefinite relaxation (SDR). 3) Simulation results show that the proposed robust design can guarantee the quality of service requirements in an RIS-aided MISO wireless system with both transceiver hardware impairments and imperfect CSI.

Consider an RIS-aided MISO downlink system, as shown in Fig. 1, where the BS transmits signals to a single-antenna user. The BS is equipped with N antennas and the RIS has L reflecting elements. Then, the signal transmitted from the BS is expressed as

where n∼CN(0,δ2) denotes the additive white Gaussian noise (AWGN) received at the user. The hardware impairments at the user is denoted as nr∼CN(0,βrE{|~y|2}), where βr∈(0,1) is the proportionality coefficient characterizing the level of the hardware impairments at the user. Let e=[ejϕ1,ejϕ2,⋯,ejϕL]T represent the reflecting beamforming vector containing the diagonal elements of Φ. Define matrix Q=diag(hH)H as the cascaded channel matrix from the BS to the user through the RIS. Then, we can obtain that eHQ=hHΦH

γ is expressed as

Due to the passive property of the RIS, it is challenging to acquire the perfect CSI. Hence, we consider the statistical CSI error, which means that the CSI estimation error is random and follows certain distribution. Then, the cascaded channel and the direct channel are respectively modeled as

where ^Q and ^g respectively represent the estimated cascaded channel and the estimated direct channel, while ΔQ and Δg are the corresponding channel estimation errors. Based on this statistical CSI error model, we assume that the channel estimation error vectors vec(ΔQ) and Δg follow the circularly symmetric complex Gaussian (CSCG) distribution[9130088], and they are respectively given by

where Σq∈CLN×LN and Σg∈CN×N are the covariance matrices of the estimation error vectors.

In this work, the transmit power is minimized by jointly optimizing the transmit beamforming and the reflecting phase shifts, subject to the unit-modulus constraints on the reflecting elements and the outage probability constraint τ, τ∈(0,1]. Thus, we can express the optimization problem as

where ∥⋅∥ denotes the Euclidean norm. The rate outage probability constraint (7c) guarantees that the receiver can decode desired information at a data rate of R no less than the probability 1−τ.

Due to the fact that the constraints (7b) are non-convex and the constraint (7c) has no simple closed-form expression[6891348], it is challenging to solve Problem (7). In order to address it, we firstly perform mathematical transformations on constraint (7c).

Firstly, we can rewrite the rate outage probability as

By defining E=eeH, the first term in (III-A) is rewritten as

where (a) holds due to Tr{A1B1C1D1}=(vec(D1T))T(CT1⊗A1)vec(B1)[Zhang2017Matrix], and (b) holds by assuming the channel estimation error vectors Δg=ζgig∼CN(0,ζ2gIN) and vec(ΔQ)=ζqiq∼CN(0,ζ2qILN), where ig and iq are the CSCG random vectors, ζg and ζq are the constants which measure the relative amount of CSI uncertainties, and IN and ILN are the N×Nidentity matrix and LN×LN identity matrix, respectively. In (10), i and ˘M are respectively defined as

Similarly, the second term of (III-A) is rewritten as

By introducing the auxiliary variables a and b, we apply the Bernstein-Type Inequality in Lemma 1 to transform the original constraint (7c) as

Then, Problem (7) can be approximated as

In this subsection, we will optimize the phase shifts vector e when the transmit beamforming vector v is fixed. Due to the fact that the objective function ∥v∥22 of Problem (17) does not contain the phase shifts vector e, Problem (17) reduces to a feasibility check problem when the variables {v,a,b} are fixed. By adopting the similar method in[9180053], we introduce a slack variable μ≥0, and it can achieve a strictly larger rate than the target rate R for the user and accelerate the convergence. Hence, the rate outage probability in constraint (III-A) is modified as

Then, by performing the same transformations for (19) again, we can obtain the approximation of (19) as

In order to obtain the variable ~E, the constrsint (17d) is reformulated as

where a(n) on the right hand side of the above inequality is the optimal solution in the n-th iteration. By optimizing ~E to make the achievable rate larger than the target rate R, Problem (18) has more space to reduce the transmit power. Therefore, the phase shifts optimization problem is reformulated as

where [~E]i,j denotes the (i,j)th element of ~E. To solve Problem (23), the SDR is employed. Then, Problem (23) becomes a convex SDP problem. By making use of the CVX tools, we can obtain the optimal solution ~E to Problem (23). The optimal phase shifts vector e can be also obtained from the optimal ~E by using Gaussian randomization techniques. Algorithm 1 presents the overall algorithm of AO method for solving Problem (17). By iterating step 2 and step 3 alternately, the transmit power decreases monotonically until the convergence accuracy is reached. By adopting the similar method in [9180053], we can obtain that the approximate complexity of Problem (18) is OV((2N+2)1/2n1[n21+2n1N2+2N3+n1N2(N+1)2]), where n1=N2. Similarly, the complexity of Problem (23) is O~E((4+2L)1/2n2[n22+n2(L2+N2(N+1)2+L)]), where n2=L2. Finally, the approximate complexity of the proposed algorithm is OV+O~E.

In this section, we provide numerical results to evaluate the performance of our proposed algorithm. We assume that the BS, the RIS, and the user are respectively located at (0 m, 0 m), (90 m, 0 m), and (90 m, 5 m) in a two-dimensional plane. The large-scale fading of the channels are modeled as PL=−30−10αlog10d, where α is the path loss exponent and d is the link distance in meter. In this work, we set α=3 and α=4 for the cascaded channel and the direct channel, respectively. The small-scale fading is assumed to be Rician distributed. For simplicity, the Rician factor is assumed to be 5. We respectively define ζ2q=δ2c||vec(^Q)||22 and ζ2g=δ2c||^g||22, where δc∈[0,1) is the channel uncertainty level. We assume that the BS and the user have the same level of the hardware impairments, i.e., βt=βr=β. The other parameters are set as: noise power of δ2=−80 dBm, target rate of R=1.5 bit/s/Hz, convergence tolerance of ϵ=10−6, outage probability of τ=0.01.

We illustrate the advantage of our proposed robust beamforming design by comparing it with the following schemes:

∙ HWI/Nonrobust CSI of [9239335]: It only considered the impact of the transceiver hardware impairments in the transmission beamforming design, while the channel estimation error was ignored. which corresponds to the beamforming design scheme in [9239335].

∙ CSI/Nonrobust HWI of [9180053]: The channel estimation error was only considered in the robust transmission design, while the hardware impairments were ignored, which corresponds to the beamforming design scheme in [9180053].

∙ Nonrobust CSI HWI of [8811733]: Both channel estimation error and hardware impairments were ignored during the transmission design, which corresponds to the beamforming design scheme in [8811733].

Fig. 4 depicts the transmit power versus the number of RIS reflecting elements L. Compared our proposed robust design with other three schemes and “Perfect CSI HWI”, which means perfect CSI acquisition and ideal hardware, it is observed that the transmit power of our proposed design is higher than others. Since the robust transmission design takes into account both the hardware impairments and the imperfect CSI, the BS needs higher power to transmit data in order to compensate for the signal loss.

This work studied an RIS-aided wireless system, where the impacts of both transceiver hardware impairments and imperfect CSI were considered. Specifically, the transmit power of the BS is minimized, subject to the outage probability constraint and the unit-modulus constraints on the reflecting elements. By adopting the Bernstein-Type Inequality, we reformulated the constraints into the tractable forms. Then, the reformulated problem was solved via the AO framework. Simulation results demonstrated that the robustness of the proposed transmission design with both hardware impairments and imperfect CSI.