Robust tracking of an unknown trajectory with a multi-rotor UAV: A high-gain observer approach

We study a trajectory tracking problem for a multi-rotor in the presence of modeling error and external disturbances. The desired trajectory is unknown and generated from a reference system with unknown or partially known dynamics. We assume that only position and orientation measurements for the multi-rotor and position measurements for the reference system can be accessed. We adopt an extended high-gain observer (EHGO) estimation framework to estimate the feed-forward term required for trajectory tracking, the multi-rotor states, as well as modeling error and external disturbances. We design an output feedback controller for trajectory tracking that comprises a feedback linearizing controller and the EHGO. We rigorously analyze the proposed controller and establish its stability properties. Finally, we numerically illustrate our theoretical results using the example of a multi-rotor landing on a ground vehicle. 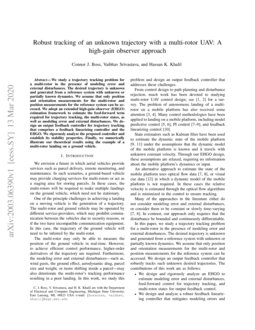 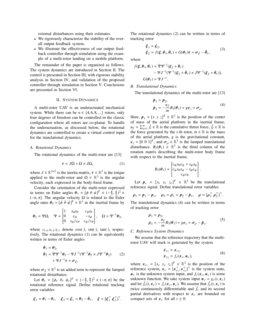 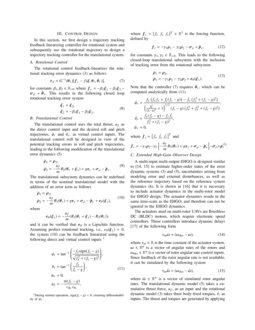 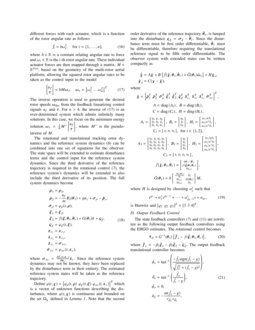 We envision a future in which aerial vehicles provide services such as parcel delivery, remote monitoring, and maintenance. In such scenarios, a ground-based vehicle may provide charging services for multi-rotors or act as a staging area for storing parcels. In these cases, the multi-rotors will be required to make multiple landings on the ground vehicle, which need not be stationary.

One of the principle challenges in achieving a landing on a moving vehicle is the generation of a trajectory. The multi-rotor and ground vehicle may be operated by different service-providers, which may prohibit communication between the vehicles due to security reasons, or if the two have incompatible communication equipment. In this case, the trajectory of the ground vehicle will need to be inferred by the multi-rotor.

The multi-rotor may only be able to measure the position of the ground vehicle in real-time. However, to achieve efficient control performance, higher-order derivatives of the trajectory are required. Furthermore, the modeling error and external disturbances—such as, wind gusts, the ground effect, aerodynamic drag, parcel size and weight, or items shifting inside a parcel—may also deteriorate the multi-rotor’s tracking performance resulting in a poor landing. In this work, we study this problem and design an output feedback controller that addresses these challenges.

From control design to path planning and disturbance rejection, much work has been devoted to studying multi-rotor UAV control design; see [1, 2] for a survey. The problem of autonomous landing of a multi-rotor on a mobile platform has also received some attention [3, 4]. Many control methodologies have been applied to landing on a mobile platform, including model predictive control [5, 6], PI control [7, 8, 9], and feedback linearizing control [10].

Many of the approaches in the literature either do not consider modeling error and external disturbances, or consider them to be constant or slowly time-varying [7, 8]. In contrast, our approach only requires that the disturbance be bounded and continuously differentiable.

In this paper, we study a trajectory tracking problem for a multi-rotor in the presence of modeling error and external disturbances. The desired trajectory is unknown and generated from a reference system with unknown or partially known dynamics. We assume that only position and orientation measurements for the multi-rotor and position measurements for the reference system can be accessed. We design an output feedback controller that robustly tracks such unknown desired trajectories. The contributions of this work are as follows:

A multi-rotor UAV is an underactuated mechanical system. While there can be n∈{4,6,8,...}

rotors, only four degrees of freedom can be controlled in the classic configuration where all rotors are co-planar. To handle the underactuation, as discussed below, the rotational dynamics are controlled to create a virtual control input for the translational dynamics.

The rotational dynamics of the multi-rotor are [13]

where J∈R3×3 is the inertia matrix, τ∈R3 is the torque applied to the multi-rotor and Ω∈R3 is the angular velocity, each expressed in the body-fixed frame.

Consider the orientation of the multi-rotor expressed in terms on Euler angles θ1=[ϕ θ ψ]T∈(−π2,π2)2×(−π,π]. The angular velocity Ω is related to the Euler angle rates θ2=[˙ϕ ˙θ ˙ψ]T∈R3 in the inertial frame by

where σξ∈R3 is an added term to represent the lumped rotational disturbance.

The translational dynamics of the multi-rotor are [13]

Here, p1=[x y z]T∈R3 is the position of the center of mass of the aerial platform in the inertial frame, uf=∑ni=1¯fi∈R is the cumulative thrust force, ¯fi∈R is the force generated by the i-th rotor, m∈R is the mass of the aerial platform, g is the gravitational constant, ez=[0 0 1]T, and σρ∈R3 is the lumped translational disturbance. R3(θ1)∈R3 is the third column of the rotation matrix describing the multi-rotor body frame with respect to the inertial frame,

where xc1=[xc yc zc]T∈R3 is the position of the reference system, xc=[x⊤c1,x⊤c2]⊤ is the system state, uc is the unknown system input, and fc(xc,uc) is some unknown function. We take system input uc=gc(t,xc) and let ¯fc(t,xc)=fc(xc,uc). We assume that ¯fc(t,xc) is twice continuously differentiable and ¯fc and its second partial derivatives with respect to xc are bounded on compact sets of xc for all t≥0.

for constants β1,β2∈R>0 where fr=−β1ξ1−β2ξ2−σξ+¨θr. This results in the following closed loop rotational tracking error system

and it can be verified that eθ is a Lipschitz function. Assuming perfect rotational tracking, i.e., eθ(ξ1)=0, the system (10) can be feedback linearized using the following direct and virtual control inputs 111During normal operation, sign(fz−g)<0, ensuring differentiability of ϕr.

where ft=[fx fy fz]T∈R3 is the forcing function, defined by

Note that the controller (7) requires ˙θr, which can be computed analytically from (11)

A multi-input multi-output EHGO is designed similar to [14, 15] to estimate higher-order states of the error dynamic systems (3) and (5), uncertainties arising from modeling error and external disturbances, as well as the reference trajectory based on the reference system dynamics (6). It is shown in [16] that it is necessary to include actuator dynamics in the multi-rotor model for EHGO design. The actuator dynamics reside in the same time-scale as the EHGO, and therefore can not be ignored in the EHGO dynamics.

where τm∈R is the time constant of the actuator system, ω∈Rn

is a vector of angular rates of the rotors and

where b∈R is a constant relating angular rate to force and ωi∈R is the i-th rotor angular rate. These individual actuator forces are then mapped through a matrix, M∈R4×n, based on the geometry of the multi-rotor aerial platform, allowing the squared rotor angular rates to be taken as the control input to the model

The inverse operation is used to generate the desired rotor speeds ωdes from the feedback linearizing control signals uf and τ. For n>4, the inverse of (17) is an over-determined system which admits infinitely many solutions. In this case, we focus on the minimum energy solution ωs=1bM+[ufτ], where M+ is the pseudo-inverse of M.

where H is designed by choosing αij such that

These control signals result in the following output feedback controller

The output feedback controller must be saturated to overcome the peaking phenomenon, see Remark 1. The following saturation function is used to saturate each estimate individually

for 1≤i≤30, where the saturation bounds Mχi are chosen such that the saturation functions will not be invoked under state feedback. The feedback linearizing control then becomes u(^χs).

In order to ensure that the rotational feedback linearizing control law remains well defined, the domain of operation must be restricted leading to the following assumption

We will now establish that for sufficiently small initial tracking error, ξ(0), the tracking error ∥ξ1(t)∥<δ for all t>0. Consequently the system will operate away from any Euler angle singularities. A Lyapunov function in the rotational error dynamics is taken as

where β1,β2∈R>0. A Lyapunov function in the translational error dynamics, assuming perfect rotational tracking, is taken as

showing that Ωξ is positively invariant, which ensures the reference signals of the rotational subsystem remain in the set of Assumption 1.

By these inequalities, Ωρ is compact and positively invariant. The domain of operation is now defined as the set Ωχ=Ωξ×Ωρ.

By Lemma 1 and Assumption 1, the rotational states remain in the set {|ϕ|<π2,|θ|<π2,|˙ϕ|<aθ,|˙θ|<aθ}, where aθ is some positive constant. Thereby ensuring singularities in the Euler angles are avoided and the feedback linearizing controller (7) remains well defined.

For the closed-loop state feedback rotational and translational subsystems, (8) and (13), respectively, with initial conditions (ξ(0),ρ(0))∈Ωχ, the system states ξ(t) and ρ(t) will remain in Ωχ for all t>0 and the states will exponentially converge to the origin.

It can be shown following the generalized proof in the Appendix that for d1 small enough, the entire closed-loop state feedback system converges exponentially to the origin, and the set Ωχ is convex and positively invariant.

for 1≤i≤3 and 1≤j≤ϱi. In the new variables, the scaled EHGO estimation error dynamics become

where Wdes=diag[ωdes]∈Rn×n, and is time-varying.

For bounded input ωdes, i.e., ωdesi≤ωmax, where ωmax is some positive constant, the actuator error dynamics (32) exponentially converge to the origin.

and the composite Lyapunov function

Using the general result for cascaded systems in the Appendix, it can be shown that the origin is exponentially stable.

Combining these states as v=[~ωs ~ω]T, the entire actuator error dynamic system can be written as

The function f(ξ,θ1,˙θr) is Lipschitz and can be bounded by

where the elements of the diagonal matrix N are Ni=∥∥Pi3Bi1∥∥. Since αij are tunable and ϵ is a design parameter, pick ϵ such that 2ϵLη∥N∥≤12 resulting in the following inequality

Taking the composite Lyapunov function as

and following the Appendix, the origin of (31) is exponentially stable.

The complete scaled observer error system (30) is (31) with an added perturbation. The perturbation is bounded by ϵφ(t,χ)<ϵκ for some κ∈R>0 and is continuous and bounded, therefore it can be treated as a nonvanishing perturbation. Following Lemma 9.2 in [18] and Theorem 2, the estimation error of the EHGO converges exponentially to an O(ϵ) neighborhood of the origin.

The EHGO estimation error ~χi=χi−^χi can be bounded by

for some positive constants a and b, by Theorem 2.1 in [19]. Initially, the estimation error can be very large, i.e., O(1/ϵϱ−1), but will decay rapidly. To prevent the peaking of the estimates from entering the plant during the initial transient, the output feedback controller needs to be saturated outside a compact set of interest. This is done by saturating the individual estimates and results in the output feedback controller u(^χs).

There is some set {W(η)≤ϵ2c} that the estimation error will enter after some short time, T(ϵ), where limϵ→0T(ϵ)=0. Since the initial state of χ resides on the interior of Ωχ, choosing ϵ small enough will ensure that χ will not leave the set Ωχ during the interval [0,T(ϵ)]. This establishes the boundedness of all states.

The closed-loop system under output feedback, with initial conditions χ(0) on the interior of Ωχ will exponentially converge to the origin, when ϵ is chosen small enough.