We consider a general statistical learning problem where an unknown fraction of the training data is corrupted. We develop a robust learning method that only requires specifying an upper bound on the corrupted data fraction. The method is formulated as a risk minimization problem that can be solved using a blockwise coordinate descent algorithm. We demonstrate the wide range applicability of the method, including regression, classification, unsupervised learning and classic parameter estimation, with state-of-the-art performance. 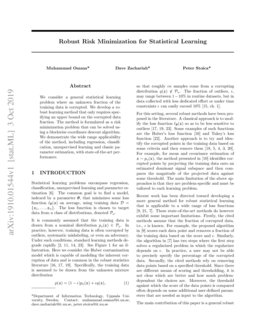 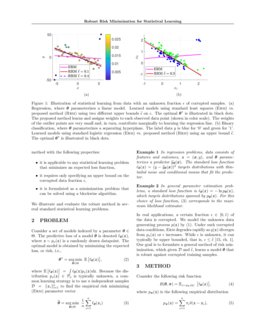 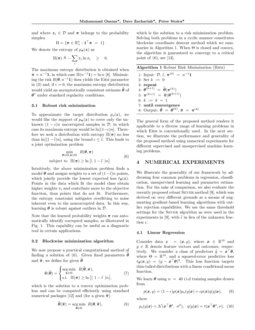 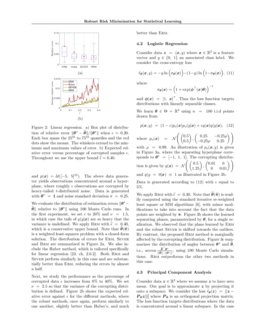 , that minimizes some loss function

ℓθ(z) on average, using training data D={z1,…,zn}. The loss function is chosen to target data from a class of distributions, denoted Po.

It is commonly assumed that the training data is drawn from a nominal distribution po(z)∈Po. In practice, however, training data is often corrupted by outliers, systematic mislabeling, or even an adversary. Under such conditions, standard learning methods degrade rapidly [2, 11, 14, 23]. See Figure 1 for an illustration. Here we consider the Huber contamination model which is capable of modeling the inherent corruption of data and is common in the robust statistics literature [16, 17, 19]. Specifically, the training data is assumed to be drawn from the unknown mixture distribution

so that roughly ϵn samples come from a corrupting distribution q(z)∉Po. The fraction of outliers, ϵ, may range between 1−10% in routine datasets, but in data collected with less dedicated effort or under time constraints ϵ can easily exceed 10% [15, ch. 1].

For this setting, several robust methods have been proposed in the literature. A classical approach is to modify the loss function ℓθ(z) so as to be less sensitive to outliers [17, 19, 23]. Some examples of such functions are the Huber’s loss function [16] and Tukey’s loss function [22]. Another approach is to try and identify the corrupted points in the training data based on some criteria and then remove them [18, 5, 4, 3, 20]. For example, for mean and covariance estimation of z∼po(z), the method presented in [10] identifies corrupted points by projecting the training data onto an estimated dominant signal subspace and then compares the magnitude of the projected data against some threshold. The main limitation of the above approaches is that they are problem-specific and must be tailored to each learning problem.

Recent work has been directed toward developing a more general method for robust statistical learning that is applicable to a wide range of loss functions [9, 21, 7]. These state-of-the-art methods do however exhibit some important limitations. Firstly, the cited methods assume that the fraction of corrupted data, i.e., ϵ is known. For example, the proposed algorithm in [9] scores each data point and removes a fraction of the training data based on the score and ϵ. Similarly, the algorithm in [7] has two steps where the first step solves a regularized problem in which the regularizer depends on ϵ. In practice, a user may not be able to precisely specify the percentage of the corrupted data. Secondly, the cited methods rely on removing data points based on a specified threshold. Since there are different means of scoring and thresholding, it is not clear which are better and how much problem-dependent the choices are. Moreover, the threshold against which the score of the data points is compared often depends on some additional user-defined parameters that are needed as input to the algorithm.

The main contribution of this paper is a general robust method with the following properties:

We illustrate and evaluate the robust method in several standard statistical learning problems.

Consider a set of models indexed by a parameter θ∈Θ. The predictive loss of a model θ is denoted ℓθ(z), where z∼po(z) is a randomly drawn datapoint. The optimal model is obtained by minimizing the expected loss, or risk, i.e.,

where . Because the distribution po(z)∈Po is typically unknown, a common learning strategy is to use n independent samples D = {zi}ni=1 to find the empirical risk minimizing (Erm

In regression problems, data consists of features and outcomes, z=(x,y), and θ parameterizes a predictor ˆyθ(x). The standard loss function ℓθ(z)=(y−ˆyθ(x))2 targets distributions with thin-tailed noise and conditional means that fit the predictor.

In general parameter estimation problems, a standard loss function is ℓθ(z)=−lnpθ(z), which targets distributions spanned by pθ(z). For this choice of loss function, (3) corresponds to the maximum likelihood estimator.

In real applications, a certain fraction ϵ∈[0,1) of the data is corrupted. We model the unknown data generating process p(z) by (1). Under such corrupted data conditions, Erm degrades rapidly as q(z) diverges from po(z) or ϵ increases. While ϵ is unknown, it can typically be upper bounded, that is, ϵ≤˜ϵ [15, ch. 1]. Our goal is to formulate a general method of risk minimization, which given D and ˜ϵ, learns a model θ that is robust against corrupted training samples.

where pπ(z) is the following empirical distribution

belongs to the probability simplex

We denote the entropy of pπ(z) as

To approximate the target distribution po(z), we would like the support of pπ(z) to cover only the unknown (1−ϵ)n uncorrupted samples in D, in which case its maximum entropy would be ln[(1−ϵ)n]. Therefore we seek a distribution with entropy H(π) no less than ln[(1−˜ϵ)n], using the bound ϵ≤˜ϵ. This leads to a joint optimization problem

Intuitively, the above minimization problem finds a model θ and assigns weights to a set of (1−˜ϵ)n points, which jointly provide the lowest expected loss ℓθ(z). Points in the data which fit the model class obtain higher weights πi and contribute more to the objective function, than points that do not fit. Furthermore, the entropy constraint mitigates overfitting to noise inherent even to the noncorrupted data. In this way, learning θ is robust against outliers in D.

Note that the learned probability weights π can automatically identify corrupted samples, as illustrated in Fig. 1. This capability can be useful as a diagnostic tool in certain applications.

We now propose a practical computational method of finding a solution of (6). Given fixed parameters ˜θ and ˜π, we define for given ˜θ

which is the solution to a risk minimization problem. Solving both problems in a cyclic manner constitutes blockwise coordinate descent method which we summarize in Algorithm 1. When Θ is closed and convex, the algorithm is guaranteed to converge to a critical point of (6), see [13].

is conventionally used. In the next section, we illustrate the performance and generality of the proposed method using numerical experiments for different supervised and unsupervised machine learning problems.

We illustrate the generality of our framework by addressing four common problems in regression, classification, unsupervised learning and parameter estimation. For the sake of comparison, we also evaluate the recently proposed robust Sever method [9], which was derived on very different grounds as a means of augmenting gradient-based learning algorithms with outlier rejection capabilities. We use the same threshold settings for the Sever algorithm as were used in the experiments in [9], with ˜ϵ in lieu of the unknown fraction ϵ.

and p(x)=U([−5, 5]10). The above data generator yields observations concentrated around a hyperplane, where roughly ϵ observations are corrupted by heavy-tailed t-distributed noise. Data is generated with θ⋆ = 1

We evaluate the distribution of estimation errors ∥θ⋆−ˆθ∥ relative to ∥θ⋆∥ using 100 Monte Carlo runs. In the first experiment, we set ϵ to 20% and ν = 1.5, in which case the tails of q(y|x)

are so heavy that the variance is undefined. We apply

Rrm with ˜ϵ = 0.40, which is a conservative upper bound. Note that ˆθ(˜π) is a weighted least-squares problem with a closed-form solution. The distribution of errors for Erm, Sever and Rrm are summarized in Figure 1(a). We also include the Huber method, which is tailored specifically for linear regression [23, ch. 2.6.2]. Both Rrm and Sever perform similarly in this case and are substantially better than Erm, reducing the errors by almost a half.

Next, we study the performance as the percentage of corrupted data ϵ increases from 0% to 40%. We set ν = 2.5 so that the variance of the corrupting distribution is defined. Figure 1(b) shows the expected relative error against ϵ for the different methods, where the robust methods, once again, perform similarly to one another, slightly better than Huber’s, and much better than Erm.

Consider data z = (x,y) where x∈R2 is a feature vector and y∈{0, 1} an associated class label. We consider the cross-entropy loss

We apply Rrm with ˜ϵ = 0.30. Note that ˆθ(˜π) is readily computed using the standard iterative re-weighted least square or MM algorithms [6], with minor modifications to take into account the fact that the data points are weighted by π. Figure 2(b) shows the learned separating planes, parameterized by θ, for a single realization. We observed that the plane learned by Erm and the robust Sever is shifted towards the outliers. By contrast, the proposed Rrm method is marginally affected by the corrupting distribution. Figure 2(c) summarizes the distribution of angles between θ⋆ and ˆθ, i.e., arccosˆθ⊤θ⋆||ˆθ|| ||θ⋆||, using 100 Monte Carlo simulations. Rrm outperforms the other two methods in this case.

Consider data z∈R2 where we assume z to have zero mean. Our goal is to approximate z by projecting it onto a subspace. We consider the loss ℓθ(z) = ||z−Pθz||22 where Pθ is an orthogonal projection matrix. The loss function targets distributions where the data is concentrated around a linear subspace. In the case of a one-dimensional subspace Pθ=θθ⊤, where Θ={θ∈R2:∥θ∥=1}.

We evaluate the misalignment of the subspaces using the metric 1−|cos(ˆθ⊤θ⋆)| evaluated over 100 Monte Carlo simulations. Figure 4 summarizes the distribution of errors for the three different methods. For this problem, Rrm outperforms both Erm and Sever.

Consider data z∈R2 with an unknown mean μ and covariance Σ. We consider the loss function

We apply Rrm with upper bound ˜ϵ = 0.30. Note that ˆθ(˜π) has a closed-form solution, given by the weighted sample mean and covariance matrix with the weight vector equal to ˆπ. We evaluate the error ||Σ⋆−ˆΣ||F relative to ||Σ⋆||F over 100 Monte Carlo simulations and show it in Figure 5. We see that Sever is prone to break down due to the heavy-tailed outliers, whereas Rrm is stable.

Finally, we test the performance of Rrm on real data. We use the Wisconsin breast cancer dataset from the UCI repository [1]. The dataset consists of n = 683 points, with features x∈R9 and labels y∈{0, 1}. The class labels 0 and 1 correspond to ‘benign’ and ‘malignant’ cancers, respectively. 60% of the data was used for training, which was subsequently corrupted it by flipping the labels of 40 class 1 datapoints to 0 (ϵ≈0.1). The goal is to estimate a linear separating plane to predict the class labels of test data. We use the cross-entropy loss function ℓθ(z) in (11) and apply the proposed Rrm method with ˜ϵ=0.15. For comparison, we also use the standard Erm and the robust Sever methods.

summarize the results using the confusion matrix as the metric. The classification accuracy for the

Rrm method is visibly higher than that of Erm and Sever for class 1.

We proposed a general risk minimization approach which provides robustness to a wide range of statistical learning problems in cases where a fraction of the observed data comes from a corrupting/adversarial distribution. Unlike existing robust methods, our approach neither assumes knowledge of the said fraction nor depends on any specific scoring functions and thresholding techniques to remove the corrupting points from data as are used in existing literature. We illustrated the wide applicability and good performance of our method by testing it on several classical supervised and unsupervised statistical learning problems using both simulated and real data.