To achieve a good tradeoff between the consumed power and the harvested power, a robust resource optimization problem is studied in a multiple-input single-output cognitive radio network with simultaneous wireless information and power transfer under imperfect channel state information. Unlike most of the existing works that assume an ideal linear energy harvesting (EH) model, we assume two practical non-linear EH models. In order to solve the resulting challenging non-convex problem, we propose an algorithm based on successive convex approximation and prove that a rank-one solution is obtained in each iteration of the proposed algorithm. Our simulation results quantify the effect of the sensitivity threshold of the EH circuit on the harvested power. 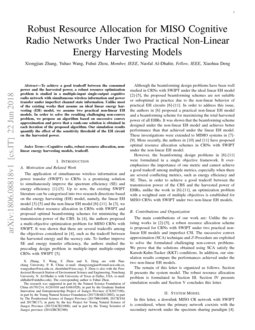 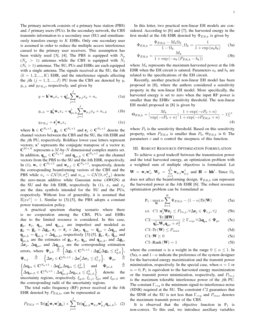 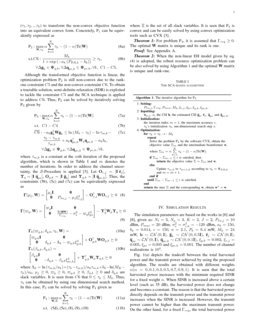 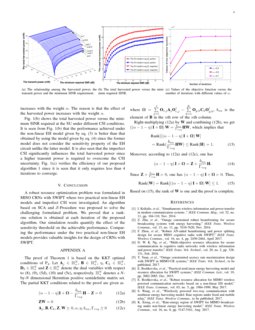 The application of simultaneous wireless information and power transfer (SWIPT) to CRNs is a promising solution to simultaneously improve the spectrum efficiency (SE) and energy efficiency [1]-[5]. Up to now, the existing SWIPT literature can be categorized into two research directions based on the energy harvesting (EH) model, namely, the linear EH model [3]-[5] and the non-linear EH model [6]-[11]. In [3], we studied robust resource allocation in CRNs with SWIPT and proposed optimal beamforming schemes for minimizing the transmission power of the CBS. In [4], the authors proposed a multi-objective optimization problem for MISO CRNs with SWIPT. It was shown that there are several tradeoffs among the objectives considered in [4], such as the tradeoff between the harvested energy and the secrecy rate. To further improve SE and energy transfer efficiency, the authors studied the precoding design problem in multiple-input multiple-output CRNs with SWIPT [5].

However, the beamforming design problems in [6]-[11] were formulated in a single objective framework. It over-emphasizes the importance of one metric and cannot achieve a good tradeoff among multiple metrics, especially when there are several conflicting metrics, such as energy efficiency and SE. Thus, in order to achieve a good tradeoff between the transmission power of the CBS and the harvested power of EHRs, unlike the work in [6]-[11], an optimization problem with a weighted sum of multiple objectives is established for MISO CRNs with SWIPT under two non-linear EH models.

The main contributions of our work are: Unlike the existing works in [2]-[5], a robust resource allocation scheme is proposed for CRNs with SWIPT under two practical non-linear EH models and imperfect CSI. The successive convex approximation (SCA) technique and S-Procedure are exploited to solve the formulated challenging non-convex problems. We prove that the solutions obtained using SCA satisfy the Karush-Kuhn-Tucker (KKT) conditions. In addition, our simulation results compare the performances achieved under the two non-linear EH models.

The remain of this letter is organized as follows. Section II presents the system model. The robust resource allocation problem is formulated in Section III. Section IV presents simulation results and Section V concludes this letter.

In this letter, a downlink MISO CR network with SWIPT is considered, where the primary network coexists with the secondary network under the spectrum sharing paradigm [4]. The primary network consists of a primary base station (PBS) and J primary users (PUs). In the secondary network, the CBS transmits information to a secondary user (SU) and simultaneously transfers energy to K EHRs. Only one secondary user is assumed in order to reduce the multiple access interference caused to the primary user receivers. This assumption has been widely used [3], [4]. The PBS is equipped with Np (Np>1) antennas while the CBS is equipped with Nt (Nt>1) antennas. The SU, PUs and EHRs are each equipped with a single antenna. The signals received at the SU, the kth (k=1,2,...,K) EHR, and the interference signals affecting the jth (j=1,2,...,J) PU from the CBS are denoted by y, ye,k and yPR,j, respectively, and given by

denote the channel vectors between the CBS and the SU, the

are the estimates of

The total radio frequency (RF) power received at the kth EHR denoted by PER,k, can be represented as

In this letter, two practical non-linear EH models are considered. According to [6] and [7], the harvested energy in the first model at the kth EHR denoted by ΦER,k is given by

where Mk represents the maximum harvested power at the kth EHR when the EH circuit is satured. Parameters ak and bk are related to the specifications of the EH circuit.

where P0 is the sensitivity threshold. Based on this sensitivity property, when PER,k is smaller than P0, ΘER,k is 0. The parameters c and n control the steepness of this function.

To achieve a good tradeoff between the transmission power and the total harvested energy, an optimization problem with a weighted sum of multiple objectives is formulated. Let W=wsw†s, Wp=J∑j=1wp,jw†p,j and H=hh†. Since Ωk does not affect the beamforming design, ΨER,k can represent the harvested power at the kth EHR [6]. The robust resource optimization problem can be formulated as

where the constant α is a weight in the range 0≤α≤1. In (5a), α and 1−α indicate the preference of the system designer for the harvested energy maximization and the transmit power minimization, respectively. In the special case, when α=1 or α=0, P1 is equivalent to the harvested energy maximization or the transmit power minimization, respectively, and PIn,j is the maximum tolerable interference power of the jth PU. The constant Γreq is the minimum signal-to-interference-noise (SINR) required at the SU. The constraint C2 guarantees that the SINR of the SU is not less than Γreq and Pmax denotes the maximum transmit power of the CBS.

where Ξ is the set of all slack variables. It is seen that P4 is convex and can be easily solved by using convex optimization tools such as CVX [3].

Theorem 1: For problem P4, it is assumed that Γreq≥0. The optimal W matrix is unique and its rank is one.

Theorem 2: When the non-linear EH model given by eq. (4) is adopted, the robust resource optimization problem can be also solved by using Algorithm 1 and the optimal W matrix is unique and rank-one.

Fig. 1(b) shows the total harvested power versus the minimum SINR required at the SU under different CSI conditions. It is seen from Fig. 1(b) that the performance achieved under the non-linear EH model given by eq. (3) is better than that obtained by using the model given by eq. (4) since the former model does not consider the sensitivity property of the EH circuit unlike the latter model. It is also seen that the imperfect CSI significantly influences the total harvested power since a higher transmit power is required to overcome the CSI uncertainty. Fig. 1(c) verifies the efficiency of our proposed algorithm 1 since it is seen that it only requires less than 4 iterations to converge.

A robust resource optimization problem was formulated in MISO CRNs with SWIPT where two practical non-linear EH models and imperfect CSI were investigated. An algorithm based on SCA and S-Procedure was proposed to solve the challenging formulated problem. We proved that a rank-one solution is obtained at each iteration of the proposed algorithm. Our simulation results quantify the effect of the sensitivity threshold on the achievable performance. Comparing the performance under the two practical non-linear EH models provides valuable insights for the design of CRNs with SWIPT.

The proof of Theorem 1 is based on the KKT optimal conditions of P4. Let Aj∈HN+, B∈HN+, η, Ck∈HN+, Dk∈HN+ and Z∈HN+ denote the dual variables with respect to (8), (9), (5d), (10) and (5e), respectively. HN+ denotes a N-by-N dimensional Hermitian positive semidefinite matrix set. The partial KKT conditions related to the proof are given as

where Ω=J∑j=1Oe,jAjO†e,j−K∑k=1Og,kCkO†g,k, bnn is the element of B in the nth row of the nth column.