In this paper, a robust optimization framework is developed to train shallow neural networks based on reachability analysis of neural networks. To characterize noises of input data, the input training data is disturbed in the description of interval sets. Interval-based reachability analysis is then performed for the hidden layer. With the reachability analysis results, a robust optimization training method is developed in the framework of robust least-square problems. Then, the developed robust least-square problem is relaxed to a semidefinite programming problem. It has been shown that the developed robust learning method can provide better robustness against perturbations at the price of loss of training accuracy to some extent. At last, the proposed method is evaluated on a robot arm model learning example. 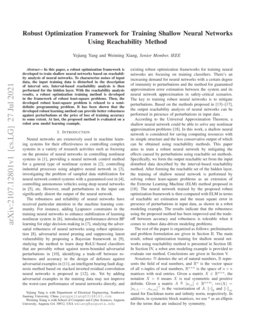 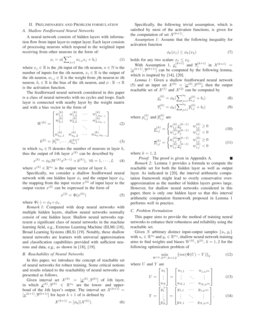 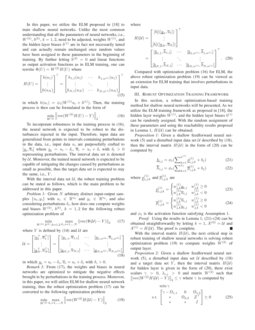 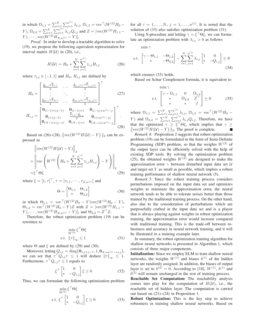 The robustness and reliability of neural networks have received particular attention in the machine learning community. For instance, adding Lyapunov constraints in the training neural networks to enhance stabilization of learning nonlinear system in [8], introducing performance-driven BP learning for edge decision-making in [3], studying the adversarial robustness of neural networks using robust optimization [7], adversarial neural pruning and suppressing latent vulnerability by proposing a Bayesian framework in [6]

, studying the method to learn deep ReLU-based classifiers that are provably robust against norm-bounded adversarial perturbations in

[12], identifying a trade-off between robustness and accuracy in the design of defenses against adversarial examples in [20]

[15, 16, 17, 10, 14], the output reachability analysis of neural networks can be performed in presence of perturbations in input data .

According to the Universal Approximation Theorem, a shallow neural network could be able to solve any nonlinear approximation problems [4]. In this work, a shallow neural network is considered for saving computing resources with its simple structure and the less conservative output of which can be obtained using reachability methods. This paper aims to train a robust neural network by mitigating the effects caused by perturbations using reachable set methods. Specifically, we form the output reachable set from the input disturbed data described by the interval-based reachability method. After forming the reachable set of the hidden layer, the training of shallow neural network is performed by solving robust least-square problems as an extension of the Extreme Learning Machine (ELM) method proposed in [4]. The neural network trained by the proposed robust optimization framework is then compared with ELM in terms of reachable set estimation and the mean square error in presence of perturbations in input data, as shown in a robot modeling example. The results indicate that the robustness using the proposed method has been improved and the trade-off between accuracy and robustness is tolerable when it comes to robust data-driven modeling problems.

is the vector space of all

n-tuples of real numbers, Rn×n is the space of n×n matrices with real entries. Given a matrix X∈Rn×n, the notation X≻0 means X is real symmetric and positive definite. Given a matrix A≜[ai,j]∈Rn×m, vec(A)=[a1,1,⋯,an,m]⊤ is the vectorization of A. ∥⋅∥2 and ∥⋅∥∞ stand for Euclidean norm and infinity norm, respectively. In addition, in symmetric block matrices, we use * as an ellipsis for the terms that are induced by symmetry.

A neural network consists of hidden layers with information flow from input layer to output layer. Each layer consists of processing neurons which respond to the weighted input receiving from other neurons in the form of:

The feedforward neural network considered in this paper is a class of neural networks with no cycles and loops. Each layer is connected with nearby layer by the weight matrix and with a bias vector in the form of

in which nk∈N denotes the number of neurons in layer k, thus the output of kth layer x(k) can be described by

where x(k)∈Rnk is the output vector of layer k.

Specifically, we consider a shallow feedforward neural network with one hidden layer ϕ1 and the output layer ϕ2, the mapping from the input vector x(0) of input layer to the output vector x(2) can be expressed in the form of

Specifically, the following trivial assumption, which is satisfied by most of the activation functions, is given for the computation of set X(k+1).

Assume that the following inequality for activation function

holds for any two scalars x1≤x2.

The proof is given in Appendix A.

Lemma 1 provides a formula to compute the reachable set for both the hidden layer as well as output layer. As indicated in [18], the interval arithmetic computation framework might lead to overly conservative over-approximation as the number of hidden layers grows large. However, for shallow neural networks considered in this paper, there is only one hidden layer so that this interval arithmetic computation framework proposed in Lemma 1 performs well in practice.

This paper aims to provide the method of training neural networks to enhance their robustness and reliability using the reachable set.

where U and Y are

In this paper, we utilize the ELM proposed in [4] to train shallow neural networks. Unlike the most common understanding that all the parameters of neural networks, i.e., W(k), b(k), k=1,2, need to be adjusted, weights W(1), and the hidden layer biases b(1) are in fact not necessarily tuned and can actually remain unchanged once random values have been assigned to these parameters in the beginning of training. By further letting b(2)=0 and linear functions as output activation functions as in ELM training, one can rewrite Φ(U)=W(2)H(U) where

To incorporate robustness in the training process in (16), the neural network is expected to be robust to the disturbances injected in the input. Therefore, input data are generalized from points to intervals containing perturbations in the data, i.e., input data ui are purposefully crafted to [u––i,¯¯¯ui] where u––i=ui−δi, ¯¯¯ui=ui+δi with δi>0 representing perturbations. The interval data set is denoted by U. Moreover, the trained neural network is expected to be capable of mitigating the changes caused by perturbations as small as possible, thus the target data set is expected to stay the same, i.e., Y.

With the interval data set U, the robust training problem can be stated as follows, which is the main problem to be addressed in this paper.

Given N arbitrary distinct input-output samples {ui,yi} with ui∈Rn0 and yi∈Rn2, and also considering perturbations δi, how does one compute weights and biases W(k), b(k), k=1,2 for the following robust optimization problem of

In this section, a robust optimization-based training method for shallow neural networks will be presented. As we utilize the ELM training framework as proposed in [4], the hidden layer weights W(1), and the hidden layer biases b(1) can be randomly assigned. With the random assignment of these parameters and using the reachability results proposed in Lemma 1, H(U) can be obtained.

Given a shallow feedforward neural network (5) and a disturbed input data set U described by (18), then the interval matrix H(U) in the form of (3) can be computed by

and ϕ1 is the activation function satisfying Assumption 1.

With the interval matrix H(U), the next critical step in robust training of shallow neural networks is solving robust optimization problem (19) to compute weights W(2) of output layer.

Given a shallow feedforward neural network (5), a disturbed input data set U described by (18) and a target data set Y, then the interval matrix H(U) for hidden layer is given in the form of (3), there exist scalars γ>0, λi,j>0 and matrix W(2) such that ∥∥vec(W(2)H(U)−Y)∥∥2≤γ where γ is computed by

In order to develop a tractable algorithm to solve (19), we propose the following equivalent representation for interval matrix H(U) in (3), i.e.,

Therefore, the robust optimization problem (19) can be rewritten to

Thus, we can formulate the following optimization problem

Using S-procedure and letting γ=ξ⊤Θξ, we can formulate an optimization problem with λi,j>0 as follows

Based on Schur Complement formula, it is equivalent to

Proposition 2 suggests that robust optimization problem (19) can be formulated in the form of Semi-Definite Programming (SDP) problem, so that the weights W(2) of the output layer can be efficiently solved with the help of existing SDP tools. By solving the optimization problem (2), the obtained weights W(2) are designed to make the approximation error γ between disturbed input data set U and target set Y as small as possible, which implies a robust training performance of shallow neural network (5).

Since the robust training process considers perturbations imposed on the input data set and optimizes weights to minimize the approximation error, the neural network tends to be able to tolerate noises better than those trained by the traditional training process. On the other hand, also due to the consideration of perturbations which are purposefully crafted in the input data set and is a player that is always playing against weights in robust optimization training, the approximation error would increase compared with traditional training. This is the trade-off between robustness and accuracy in neural network training, and it will be illustrated in a training example later.

In summary, the robust optimization training algorithm for shallow neural networks is presented in Algorithm 1, which consists of three major components.

Initialization: Since we employ ELM to train shallow neural networks, the weights W(1) and biases b(1) of the hidden layer are randomly assigned. In addition, the biases of output layer is set to b(2)=0. According to [4], W(1), b(1) and b(2) will remain unchanged in the rest of training process.

Reachable Set Computation: The reachability analysis comes into play for the computation of H(U), i.e., the reachable set of hidden layer. The computation is carried out based on (21)–(24) in Proposition 1.

Robust Optimization: This is the key step to achieve robustness in training shallow neural networks. Based on Proposition 2, the robust optimization training process is converted to an SDP problem in the form of (2), which can be solved by various SDP tools.

In this section, a learning forward kinematics of a robotic arm model with two joints proposed in [16] is used to evaluate our developed robust optimization training method. The robotic arm model is shown in Fig. 1.

Furthermore, the trade-off between robustness and accuracy mentioned in Remark 5 are elucidated in Table I. It can be seen that robust learning provides a better tolerance in input data noises but yields less accuracy than the traditional learning process, i.e., a larger Mean Square Error (MSE).

A robust optimization learning framework is proposed in this paper for shallow neural networks. First, the input set data are generalized to interval sets to characterize injected noises. Then based on the layer-by-layer reachability analysis for neural networks, the output sets of the hidden layer are computed, which play a critical role in the robust optimization training process. The robust training problem is formulated in terms of robust least-squares problems, which can be then converted to an SDP problem. The trade-off between robustness and training accuracy is observed in the proposed framework. A robot arm modeling example is provided to evaluate our method.