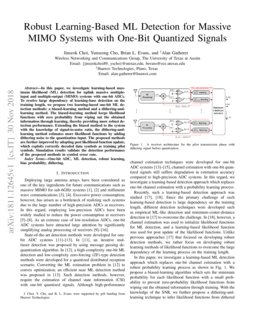 The use of one-bit analog-to-digital converters (ADCs) at a receiver is ...
Yo-Seb Jeon, et al. ∙

Binary MIMO Detection via Homotopy Optimization and Its Deep Adaptation

We present an analytical framework for the channel estimation and the da...
Italo Atzeni, et al. ∙

At hybrid analog-digital (HAD) transceiver, an improved HAD rotational i...
Feng Shu, et al. ∙

Deploying large antenna arrays have been considered as one of the key ingredients for future communications such as massive MIMO for sub-6GHz systems [1, 2] and millimeter wave communications [3, 4]. Excessive power consumption, however, has arisen as a bottleneck of realizing such systems due to the large number of high-precision ADCs at receivers. In this regard, employing low-precision ADCs have been widely studied to reduce the power consumption at receivers [5, 6, 7, 8]. As an extreme case of low-resolution ADCs, one-bit ADC systems have attracted large attention by significantly simplifying analog processing of receivers [9, 10, 11, 12, 13, 14, 15, 16].

In this paper, we investigate a learning-based ML detection approach which replaces one-bit channel estimation with a robust probability learning process as shown in Fig. 1. We propose a biased-learning algorithm which sets the minimum probability for each likelihood function with a small probability to prevent zero-probability likelihood functions from wiping out the obtained information through training. With the knowledge of the SNR, we further propose a dithering-and-learning technique to infer likelihood functions from dithered signals: we first add a dithering signal to the quantization input and then estimate the true likelihood function from the dithered quantized signals. The proposed method allows to estimate the likelihood probability with a reasonable training length by drawing the change of signs in the sequence of the quantized signals within the training phase. Accordingly, the BS can directly perform the ML detection which is optimal in minimizing the probability of detection error for equally-probable transmit symbols. The likelihood probability can be further updated by utilizing correctly decoded data symbols as pilot symbols. Simulation results demonstrate that unlike the conventional learning-based one-bit ML detection, the proposed detection techniques show robust detection performance in terms of symbol error rate, achieving comparable performance to the optimal one-bit ML detection that requires the estimation of the CSI.

¯sk∈CNu is denoted as K, k=1,…,K, and each pilot symbol vector ¯sk is transmitted Ntr times during the pilot transmission phase, i.e., Np=KNtr.

that follows a complex Gaussian distribution of zero mean and variance

represents the identity matrix with proper dimensions. Each user symbol

¯su[n] is generated from the set of symbols, ¯su[n]∈S and assumed to have zero mean and unit variance, i.e., E[¯su]=0 and E[|¯su[n]|2]=1, where ¯su[n] denotes the uth element of ¯s[n]. We assume a block fading narrowband channel ¯H111Although we assume a narrowband channel model for convenience, the proposed methods can be applicable to any block fading channel model. where the channel is invariant during the transmission of (Np+Nd) symbol time. We define the signal-to-noise ratio (SNR) as γ=ρ/N0.

where Q(⋅) is a element-wise quantizer, and Re{¯r[n]} and Im{¯r[n]} denote the real and imaginary parts of a complex vector ¯r[n], respectively. The received signal in the complex-vector form ¯r can be rewritten in a real-vector form as

Accordingly, we can rewrite the quantized signal in a real-vector form as

In this section, we propose robust learning-based ML detection methods for one-bit ADC systems to achieve the ML detection performance without estimating channels. Being identical to the maximum a posteriori estimation, the ML estimation is optimal in minimizing the probability of detection error when all possible transmit symbols have an equal probability for being transmitted. We first introduce the conventional one-bit ML detection with the CSI in the following subsection.

where pk(yi[n]) denotes the likelihood function for the ith element yi[n]∈{1,−1} when the symbol sk is transmitted for the given channel, and it is defined as

is the cumulative distribution function (CDF) of a standard Gaussian distribution. Note that (

7) becomes an exact representation of P(y[n]|H,sk) when all elements in y[n] are independent to each other. Based on (7), the ML detection rule is given as

where we define the index set of all possible symbol vectors as K={1,2,…,K} with K=|S|Nu. Here, |S| denotes the cardinality of the set S. The detection rule in (9) is computed by using (8) with the CSI.

In this subsection, we introduce a learning-based one-bit ML detection approach which does not require channel estimation and propose robust learning techniques with respect to the training length Ntr. During the pilot transmission of length Np, each pilot symbol vector sk is transmitted Ntr times and the BS learns likelihood functions by measuring the frequency of yi[n]=1 and yi[n]=−1 during the transmission as

where b∈{1,−1} and 1(A) is an indicator function which is 1(A)=1 if A is true or 1(A)=0 otherwise. After learning the likelihood functions by using (10), the BS has the estimate of the likelihood probability for the quantized signal vector y[n] in the data transmission phase as

and can perform the ML detection in (9).

With a limited length of training Ntr, however, the empirical likelihood function ^p(b)k,i for b∈{1,−1} may have probability of zero p(b)k,i=0 after learning through Ntr transmissions if the change of signs of quantized output sequences yi[n], n=(k−1)Ntr+1,…,kNtr, is not observed during Ntr transmissions for the symbol sk. The likelihood functions with zero probability make the likelihood probability of the observed signal P(y[n]|H,sk) in (11) zero for many candidate symbols sk which may include the desired symbol. Consequently, the zero-probability likelihood functions wipe out the entire information obtained during the pilot-based learning phase, thereby severely degrading the detection performance. Note that it is even more likely to have zero probability ^p(b)k,i=0 in the high SNR.

To address this challenge without requiring the SNR knowledge γ as well as the CSI, we propose a biased-learning ML detection approach, which is simple but highly robust to the length of the training Ntr. Then, we will extend the proposed detection approach to the case with the SNR knowledge to improve learning performance. In this approach, we limit the minimum likelihood function to be ^p(b)k,i≥pbias. The bias probability pbias needs to be pbias<1/Ntr as no change in the sign of quantization output sequences yi[n] is observed within Ntr transmissions for sk. The proposed biased-learning ML detection approach is summarized as

Now, we propose a dithering-and-learning one-bit ML detection under the SNR knowledge γ at the BS, where the noise variance N0 is known to the BS as well as the transmit power ρ. As shown in Fig. 1, the BS adds dithering signals d[n] to the quantization inputs ri[n] during only the pilot transmission phase to draw the change in the sign of output sequences yi[n]. After dithering, the quantization input in the real-vector form becomes

We use d[n] which follows a Gaussian distribution with zero mean and variance of σ2/2, i.e., d[n]∼N(0,σ2/2I2Nr), and the variance σ2/2 is known to the BS. Then, the dithered and quantized signal becomes

The estimation of the SNR γ—equivalently noise variance N0 in this paper—can be performed by offline training as shown in Fig. 3(a). The offline training first collects training data and measures the SNR by estimating channels. Then, the BS obtains data sets of (γi,n0i) over tested SNR values, where n0i denotes the average number of zero-probability likelihood functions out of 2Nr for the SNR γi. Using the collected data sets, the offline training provides the mapping between the average number of likelihood functions with zero probability and the SNR level, providing the estimated value of N0

. As a mapping function, popular supervised learning methods can be used such as linear regression and neural network

[21]. Fig. 3 shows the example of offline training with 5th order linear regression, which we use for simulations.

The performance of the proposed algorithms can be further improved by adopting the post update approach which exploits the correctly decoded data symbols to update the initially estimated likelihood functions ^p(b)k,i [18]. To this end, the BS divides the data transmission into D subframes of length Nsubd, i.e., Nd=DNsubd, and appends cyclic-redundancy-check (CRC) bits at each data subframe. Then, when each data subframe is correctly decoded, which can be determined by checking CRC, the BS uses the decoded symbols as pilot symbols to update the initial likelihood functions.

where vj is the number of successfully decoded data frames during the first j data subframes, 0≤αk,i(vj)≤1 is the update rate for ^p(b)k,i after decoding the jth data subframe, ^p(b)k,i(0) is the initially estimated likelihood function from the training phase, and ^p(b)k,i(vj) is the likelihood function for the candidate symbol vector sk at the ith quantized signal yi learned from the vj correctly decoded data subframes. The optimal value of the parameter αk,i(vj), however, needs to be empirically determined. Accordingly, such update approach can provide more benefit to the biased-learning method than the dithering-and-learning method.

In this section, we evaluate the performance of the proposed learning-based algorithms in terms of the SER. In simulations, we compare the following learning-based detection methods which does not require the channel estimation:

Fig. 5 shows the SER for (a) Ntr=30 and (b) Ntr=50 with the dithering noise variance of σ2=ρ/2. We note that the proposed algorithms closely follow the SER performance of the optimal one-bit ML case over the considered SNR range in both Fig. 5(a) and Fig. 5(b). Although the one-bit ZF detection show the better performance than the other methods in the low SNR, it shows the large performance degradation in the medium to high SNR. The proposed methods outperform the one-bit ZF detection and the other learning-based methods with the same Ntr such as conventional learning-based one-bit ML, eMLD, MMD, and MCD in most cases. In particular, as the number of training Ntr increases, the performance gap between the proposed methods and the other learning-based methods increases.

The performance improvement is achieved because the proposed methods provide robust likelihood function learning with the same Ntr, and thus, the ML detection can be directly performed, which is optimal for certain cases. We further note that the dithering-and-learning ML method with the estimated SNR achieves similar performance to the perfect SNR case, which shows the effectiveness of the offline learning and robustness of the proposed detection method to the SNR estimation error. Accordingly, the proposed learning-based detection methods achieve a near optimal detection performance over the low to high SNR regime, providing the robust performance with respect to the training length. In addition, the training length Ntr can be reduced to half of the desired length by utilizing a symmetric property of constellation mapping and quantization [18].

In this paper, we proposed robust learning-based one-bit ML detection methods for uplink massive MIMO communications. Since the performance of a learning-based one-bit detection approach can be severely degraded when the number of training symbols is insufficient, the proposed methods addressed such challenge by adopting bias probability and a dithering technique. Without requiring the channel knowledge, the biased-learning method and the dithering-and-learning method perform ML detection through learning likelihood functions, which is robust to the number of training symbols. Simulation results demonstrate the detection performance of the proposed methods in terms of symbol error rate. Therefore, the proposed robust learning-based one-bit ML detection methods can potentially achieve the improved performance-power tradeoff for one-bit massive MIMO systems.