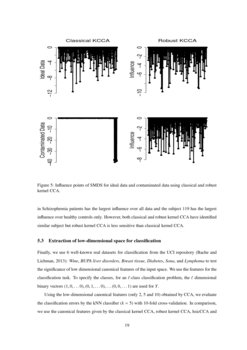 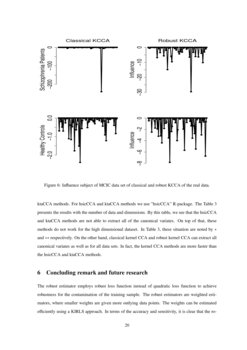 Testing the association between SNP effects and a response is a common t...
Kara Martinez, et al. ∙

The Completion of Covariance Kernels

The incorporation of various unsupervised learning methods for multiple data sources into genomic analysis is a rather recent topic. Using the dual representations, the task of learning with multiple data sources is related to the kernel-based data fusion, which has been actively studied in the last decade Bach (2008), Steinwart and Christmann (2008), Hofmann et al. (2008)

. But these methods are not robust; these are sensitive to contaminated data. Even though a number of researches has been done on robustness issue for supervised learning, especially support vector machine for classification and regression

(Christmann and Steinwart, 2004, 2007, Debruyne et al., 2008), there are no general well-founded robust methods for unsupervised learning.

Robustness is an essential and challenging issue in statistical machine learning for multiple sources data analysis. Because

, data that cause surprise in relation to the majority of the data, are often occur in the real data. Outliers may be right, but we need to examine for transcription errors. They can play havoc with classical statistical methods or statistical machine learning methods. To overcome this problem, since 1960 many robust methods have been developed, which are less sensitive to outliers. The goals of robust statistics are to use the methods from the bulk of the data and indicate the points deviating from the original pattern for further investment

, which is less sensitive than the kernel density estimation. To the best of our knowledge, two spacial robust kernel PCA methods have been proposed based on weighted eigenvalues decomposition

(Huang et al., 2009b) and spherical kernel PCA (Debruyne et al., 2010). They show that the influence function (IF), a well-known measure of robustness, of kernel PCA can be arbitrary large for unbounded kernels.

During the last ten years, a number of papers have been about the properties of kernel CCA, CCA using positive definite kernels, called classical kernel CCA and its variants have been proposed (Fukumizu et al., 2007, Hardoon and Shawe-Taylor, 2009, Otopal, 2012, Alam and Fukumizu, 2015). Due to the properties of eigen decomposition it is still a well applied methods for multiple souses data analysis. In recent years, two canonical correlation analysis (CCA) methods based on Hilbert-Schmidt independence criterion (hsicCCA) and centered kernel target alignment (ktaCCA) have been proposed by Chang et al. (2013). These methods are able to extract nonlinear structure of the data as well. Due to the gradient based optimization, these methods are not able to extract all canonical variates using the same initial value and do not work for high dimensional datasets. For more details, see Section 5.3. An empirical comparison and sensitivity analysis for robust linear CCA and classical kernel CCA is also discussed, and gives similar interpretation as kernel PCA for kernel CCA without any theoretical results (Alam et al., 2010).

Most of the kernel methods explicitly or implicitly depend on kernel covariance operator (kernel CO) or kernel cross-covariance operator (kernel CCO). Among others, these are most useful tools of unsupervised kernel methods but have not been robust yet. They can be formulated as an empirical optimization problem to achieve robustness by combining empirical optimization problem with ideas of Huber or Hampel s M-estimation model (Huber and Ronchetti, 2009, Hampel et al., 2011). The robust kernel CO and robust kernel CCO can be computed efficiently via a kernelized iteratively re-weighted least square (KIRWLS) problem. In robust kernel DE based on robust kernel mean elements (robust kernel ME) is used KIRWLS in reproducing kernel Hilbert space (RKHS) (Kim and Scott, 2012). Debruyne et al. (2010) have proposed a visualization methods for detecting influential observations from one set of the data using IF of kernel PCA. In addition, Romanazzi (1992) has proposed the IF of canonical correlation and canonical vectors of linear CCA but the IF of classical kernel CCA and any robust kernel CCA have not been proposed, yet. All of these considerations motivate us to conduct studies on robust kernel CCO toward kernel unsupervised methods.

be the probability measure on

X, Y and X×Y, respectively. Also let X1,X2,…,Xn,; Y1,Y2,…,Yn and (X1,Y1),(X2,Y2),…,(X2,Y2) be the random sample from the distribution FX, FY and FXY, respectively. A symmetric kernel k(⋅,⋅) defined on a space is called positive definite kernel if the Gram matrix (k(Xi,Xj))ij is positive semi-definite (Aronszajn, 1950). By the reproduction properties and kernel trick, the kernel can evaluate the inner product of any two feature vectors efficiently without knowing an explicit form of either the feature map (Φ(⋅)=k(⋅,X),∀X∈X) or feature spaces (H). In addition, the computational cost does not depend on dimension of the original space after computing the Gram matrices (Fukumizu and Leng, 2014, Alam and Fukumizu, 2014).

A mapping MX:=EX[Φ(X)]=EX[k(⋅,X)] with EX[k(X,X)]<∞ is an element of the RKHS HX. By the reproducing property with X∈X, kernel mean elements is defined as

. Given an independent and identically distributed sample, the mapping mX=1n∑ni=1Φ(Xi)=1n∑ni=1k(⋅,Xi) is an empirical element of the RKHS, HX, ⟨mX,f⟩HX=⟨1n∑ni=1k(⋅,Xi),f⟩=1n∑ni=1f(Xi). The sample kernel ME of the feature vectors Φ(Xi) can be regraded as a solution to the empirical risk optimization problem (Kim and Scott, 2012)

Similarly, we can define kernel CCO as an empirical risk optimization problem. An operator, ΣYX:=HX→YY with EX[kX(X,X)]<∞, and EY[kY(Y,Y)]<∞, by the reproducing property which is defined as

and called kernel CCO. Given the pair of independent and identically distributed sample, (Xi,Yi)ni=1, the kernel CCO is an operator of the RKHS, HX⊗HY, Eq. (1) becomes

where . and the kernel covariance operator at point (Xi,Yi) is then

and Hampel’s function is defined as

As in (Kim and Scott, 2012), Eq. (3) does not has a closed form solution, but using the kernel trick the classical re-weighted least squares (IRWLS) can be extended to a RKHS. The solution is then,

The algorithms of estimating robust Gram matrix and robust kernel CCO are given in Figure 1 and in Figure 2, respectively.

To define the notion of robustness in statistics, different approaches have been proposed science 70’s decay for examples, the minimax approach (Huber, 1964), the sensitivity curve (Tukey, 1977), the influence functions (Hampel, 1974, Hampel et al., 1986) and in the finite sample em breakdown point (Donoho and Huber, 1983). Due to simplicity, IF is the most useful approach in statistics and in statistical supervised learning Christmann and Steinwart (2007, 2004). In this section, we briefly discuss the notion of IF, IF of kernel ME, IF of kernel CO and kernel CCO. (For details see in Appendix).

Let (Ω, A, P) be a probability space and (X,B) a measure space. We want to estimate the parameter θ∈Θ of a distribution F in A. We assume that exists a functional R:D(R)→R, where D(R)

is the set of all probability distribution in

A. Let G be some distribution in A. If data do not fallow the model F exactly but slightly going toward G, the Gâteaux Derivative at F is given by

Suppose x∈X and G=Δx is the probability measure which gives mass 1 to {x}. The influence function (special case of Gâteaux Derivative) of R at F is defined by

provided that the limit exists. It can be intuitively interpreted as a suitably normalized asymptotic influence of outliers on the value of an estimate or test statistic.

There are three properties of IF: gross error sensitivity, local shift sensitivity and rejection point. They measured the worst effect of gross error, the worst effect of rounding error and rejection point. For a scalar, we just define influence function (IF) at a fixed point. But if the estimate is a function, we are able to express the change of the function value at every points (Kim and Scott, 2012).

For a scalar we just define IF at a fixed point. But if the estimate is a function, we are able to express the change of the function value at every point.

The IF of complicated statistics, which are functions of simple statistics, can be calculated with the chain rule. Say

It can also be used to find the IF for a transformed statistic, given the influence function for the statistic itself.

The IF of kernel CCO, R(FXY)

FXY, using complicated statistics at Z′=(X′,Y′) is given by

For the bounded kernels, the above IFs have three properties: gross error sensitivity, local shift sensitivity and rejection point. It is not true for the unbounded kernels, for example, liner and polynomial kernels. We can make similar conclusion for the kernel covariance operator.

has been used for various purposes including preprocessing for classification, contrast function of independent component analysis, test of independence between two sets of variables, which has been applied in many domains such as genomics, computer graphics and computer-aided drug discovery and computational biology

The aim of classical kernel CCA

X and Y with two functions in the RKHS, fX(⋅)∈HX and fY(⋅)∈HY, the optimization problem of the random variables fX(X) and fY(Y) is

The optimizing functions fX(⋅) and fY(⋅) are determined up to scale.

Using a finite sample, we are able to estimate the desired functions. Given an i.i.d sample, (Xi,Yi)ni=1 from a joint distribution FXY, by taking the inner products with elements or “parameters” in the RKHS, we have features fX(⋅)=⟨fX,ΦX(X)⟩HX=∑ni=1aiXkX(⋅,Xi) and fY(⋅)=⟨fY,ϕY(Y)⟩HY=∑ni=1aiYkY(⋅,Yi), where kX(⋅,X) and kY(⋅,Y) are the associated kernel functions for HX and HY, respectively. The kernel Gram matrices are defined as KX:=(kX(Xi,Xj))ni,j=1 and KY:=(kY(Yi,Yj))ni,j=1. We need the centered kernel Gram matrices MX=CKXC and MY=CKYC, where C=In−1nBn with Bn=1n1Tn and 1n is the vector with n ones. The empirical estimate of Eq. (7) is then given by

and W is a diagonal matrix with elements 1n, and aX and aY are the directions of X and Y, respectively. The regularized coefficient κ>0.

By using the IF results of kernel PCA, linear PCA and of linear CCA, we can derive the IF of kernel CCA: kernel CC and kernel CVs,

Given two sets of random variables (X,Y) having distribution FXY, the influence function of kernel canonical correlation and canonical variate at Z′=(X′,Y′) are given by

To prove Theorem 4.1, we need to find the IF of L. All notations and proof are explained in Appendix.

It is known that the inverse of an operator may not exits even exist it may not be continuous operator in general (Fukumizu et al., 2007). While we can derive kernel canonical correlation using correlation operator VYX=Σ−12YYΣYXΣ−12XX, even when Σ−12XX and Σ−12YY are not proper operators, the IF of covariance operator is true only for the finite dimensional RKHSs. For infinite dimensional RKHSs, we can find IF of Σ−12XX by introducing a regularization term as follows

where κ>0 is a regularization coefficient, which gives empirical estimator.

SNP and fMRI structural data (SMSD): Two data sets of SNP data X with 1000 SNPs and fMRI data Y with 1000 voxels were simulated. To correlate the SNPs with the voxels, a latent model is used as in Parkhomenko et al. (2009)). For contamination, we consider the signal level, 0.5 and noise level, 1 to 10 and 20, respectively.