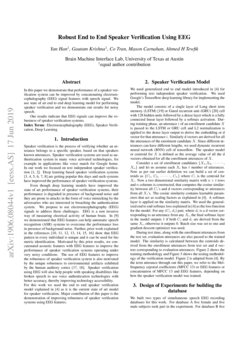 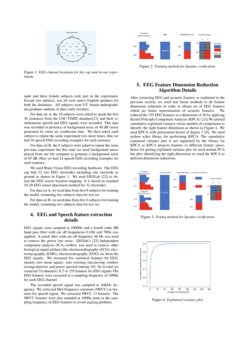 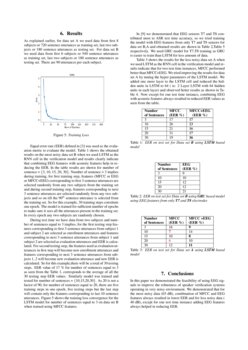 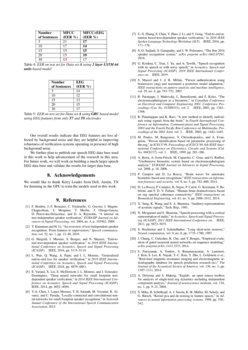 We used generalized end to end model introduced in [4]

[20] cell with 128 hidden units followed by a dense layer which is a fully connected linear layer followed by a softmax activation. During training phase, an utterance i of an enrollment candidate X

i. Similarly d vectors are derived for all the utterances of the enrolment candidate X

. Since different utterances can have different lengths, we used dynamic recurrent neural network (RNN) cell of tensorflow. The speaker model or centroid for

X is defined as the average value of all the d vectors obtained for all the enrollment utterances of X.

Consider a set of enrollment candidates {X1,X2, ⋯⋯, Xn} and let us assume each Xi has t number of utterances. Now as per our earlier definition we can build a set of centroids as {C1, C2, ⋯⋯, Cn} where Ci is the centroid for Xi. Now a two dimensional similarity matrix with n×t rows and n

columns is constructed, that computes the cosine similarity between all

Ci’s and d vectors corresponding to utterances from all Xi’s. The cosine similarity contains learnable parameters that act as scaling factors as explained in [4]

. A softmax layer is applied on the similarity matrix. We used the generalized end to end softmax loss explained in

as the loss function for the model. For any (

Ci, di) pair, where di is a d vector corresponding to an utterance from any Xi, the final softmax layer in the model outputs 1 if both Ci and di are derived from the same Xi, otherwise it outputs 0. Batch size was set to one and gradient descent optimizer was used.

During test time, along with the enrollment utterances from the test set, evaluation utterances are also passed to the trained model. The similarity is calculated between the centroids derived from the enrollment utterances from test set and d vectors corresponding to evaluation utterances. Figure 2 shows the training methodology and Figure 3 shows the testing methodology of the verification model. Figure 2 is adapted from [4]. By the term utterance through out this paper, we refer to the Mel-frequency cepstral coefficients (MFCC 13) or EEG features or concatenation of MFCC 13 and EEG features, depending on how the speaker verification model was trained.

3 Design of Experiments for building the database

We built two types of simultaneous speech EEG recording databases for this work. For database A five female and five male subjects took part in the experiment. For database B five male and three female subjects took part in the experiment. Except two subjects, rest all were native English speakers for both the databases. All subjects were UT Austin undergraduate,graduate students in their early twenties.

For data set A, the 10 subjects were asked to speak the first 30 sentences from the USC-TIMIT database[21] and their simultaneous speech and EEG signals were recorded. This data was recorded in presence of background noise of 40 dB (noise generated by room air conditioner fan). We then asked each subject to repeat the same experiment two more times, thus we had 30 speech EEG recording examples for each sentence.

For data set B, the 8 subjects were asked to repeat the same previous experiment but this time we used background music played from our lab computer to generate a background noise of 65 dB. Here we had 24 speech EEG recording examples for each sentence.

We used Brain Vision EEG recording hardware. Our EEG cap had 32 wet EEG electrodes including one electrode as ground as shown in Figure 1. We used EEGLab [22] to obtain the EEG sensor location mapping. It is based on standard 10-20 EEG sensor placement method for 32 electrodes.

For data set A, we used data from first 8 subjects for training the model, remaining two subjects data for test set.

For data set B, we used data from first 6 subjects for training the model, remaining two subjects data for test set.

EEG signals were sampled at 1000Hz and a fourth order IIR band pass filter with cut off frequencies 0.1Hz and 70Hz was applied. A notch filter with cut off frequency 60 Hz was used to remove the power line noise. EEGlab’s [22]Independent component analysis (ICA) toolbox was used to remove other biological signal artifacts like electrocardiography (ECG), electromyography (EMG), electrooculography (EOG) etc from the EEG signals. We extracted five statistical features for EEG, namely root mean square, zero crossing rate,moving window average,kurtosis and power spectral entropy [9]. So in total we extracted 31(channels) X 5 or 155 features for EEG signals.The EEG features were extracted at a sampling frequency of 100Hz for each EEG channel.

After extracting EEG and acoustic features as explained in the previous section, we used non linear methods to do feature dimension reduction in order to obtain set of EEG features which are better representation of acoustic features. We reduced the 155 EEG features to a dimension of 30 by applying Kernel Principle Component Analysis (KPCA) [23]

.We plotted cumulative explained variance versus number of components to identify the right feature dimension as shown in Figure 4. We used KPCA with polynomial kernel of degree 3

was used as the evaluation metric to evaluate the model. Table 1 shows the obtained results on the most noisy data set B when we used LSTM as the RNN cell in the verification model and results clearly indicate that combining EEG features with acoustic features help in reducing the EER. In the table results are shown for number of sentence = {3, 10, 15, 20, 30}. Number of sentence = 3 implies during training, for first training step, features (MFCC or EEG or MFCC+EEG) corresponding to first 3 sentence utterances are selected randomly from any two subjects from the training set and during second training step, features corresponding to next 3 sentence utterances are selected randomly from any two subjects and so on till the 90 sentence utterance is selected from the training set. So for this example, 30 training steps constitute one epoch. The model is trained for sufficient number of epochs to make sure it sees all the utterances present in the training set. In every epoch any two subjects are randomly chosen.

In [9] we demonstrated that EEG sensors T7 and T8 contributed most to ASR test time accuracy, so we tried training the model with EEG features from only T7 and T8 sensors for data set B,A and obtained results are shown in Table 2,Table 5 respectively. We used GRU model for T7,T8 training as GRU is easier to train than LSTM for less amount of data.

Table 3 shows the results for the less noisy data set A when we used LSTM as the RNN cell in the verification model and results indicate that for two test time instances, MFCC performed better than MFCC+EEG. We tried improving the results for data set A by tuning the hyper parameters of the LSTM model. We added one more layer to the LSTM cell and reduced the hidden units in LSTM to 64 ( ie: 2 Layer LSTM with 64 hidden units in each layer) and observed better results as shown in Table 4. Now except for one test time instance, combining EEG with acoustic features always resulted in reduced EER values as seen from the table.

In this paper we demonstrated the feasibility of using EEG signals to improve the robustness of speaker verification systems operating in very noisy environment. We demonstrated that for the most noisy data (65 dB), combination of MFCC and EEG features always resulted in lower EER and for less noisy data ( 40 dB), except for one test time instance adding EEG features always helped in reducing EER.

Our overall results indicate that EEG features are less affected by background noise and they are helpful in improving robustness of verification systems operating in presence of high background noise.

We would like to thank Kerry Loader from Dell, Austin, TX for donating us the GPU to train the models used in this work.