In this paper, based on directional modulation (DM), robust beamforming matrix design for sum secrecy rate maximization is investigated in multi-user systems. The base station (BS) is assumed to have the imperfect knowledge of the direction angle toward each eavesdropper, with the estimation error following the Von Mises distribution. To this end, a Von Mises distribution-Sum Secrecy Rate Maximization (VMD-SSRM) method is proposed to maximize the sum secrecy rate by employing semi-definite relaxation and first-order approximation based on Taylor expansion to solve the optimization problem. Then in order to optimize the sum secrecy rate in the case of the worst estimation error of direction angle toward each eavesdropper, we propose a maximum angle estimation error-SSRM (MAEE-SSRM) method. The optimization problem is constructed based on the upper and lower bounds of the estimated eavesdropping channel related coefficient and then solved by the change of the variable method. Simulation results show that our two proposed methods have better sum secrecy rate than zero-forcing (ZF) method and signal-to-leakage-and-noise ratio (SLNR) method. Furthermore, the sum secrecy rate performance of our VMD-SSRM method is better than that of our MAEE-SSRM method. 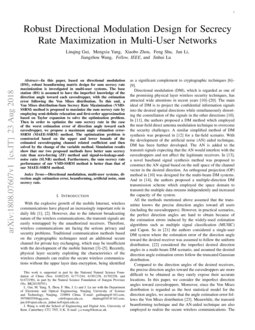 Directional modulation (DM), which is regarded as one of the promising physical layer wireless security techniques, has attracted wide attentions in recent years [10, 11, 12, 13, 14, 15, 16, 17, 18, 19, 20]. The main ideal of DM is to project the confidential information signals into the desired spatial directions while simultaneously distorting the constellation of the signals in the other directions [10]. In [11], the authors proposed a DM method which employed the near-field direct antenna modulation technique to overcome the security challenges. A similar simplified method of DM synthesis was proposed in [12] for a far-field scenario. With the development of the artificial noise (AN) aided technique, DM has been further developed. The AN is added to the transmit signals expecting that the AN would interfere with the eavesdroppers and not affect the legitimate receivers. In [13]

, a novel baseband signal synthesis method was proposed to construct the AN signal based on the null space of the channel vector in the desired direction. An orthogonal projection (OP) method in

[10] was designed for the multi-beam DM systems. And in [14], the authors proposed a multiple-direction DM transmission scheme which employed the space domain to transmit the multiple data streams independently and increased the capacity of the system.

All the methods mentioned above assumed that the transmitter knows the precise direction angles toward all users (including the eavesdroppers). However, in practical scenarios, the perfect direction angles are hard to obtain because of the estimation errors induced by the widely-used estimation algorithms such as multiple signal classification (MUSIC) and Capon. So in [21]

the authors considered a single-user DM system where the estimation error of the direction angle toward the desired receiver was assumed to follow the uniform distribution.

Compared to the direction angles of the desired receivers, the precise direction angles toward the eavesdroppers are more difficult to be obtained as they rarely expose their accurate locations. In this paper, we consider the imperfect direction angles toward eavesdroppers. Moreover, since the Von Mises distribution is regarded as the best statistical model for the direction angles, we assume that the angle estimation error follows the Von Mises distribution [23]. Meanwhile, the transmit beamforming technique and the AN-aided technique are also employed to realize the secure wireless communications. The main contributions of this paper are summarized as follows:

1) We propose a Von Mises distribution-Sum Secrecy Rate Maximization (VMD-SSRM) robust DM scheme which designs the robust signal beamforming matrix and AN beamforming matrix on the assumption that the estimation errors of direction angles toward the eavesdroppers follow the Von Mises distribution. First, the expectation of the estimated eavesdropping channel related coefficient is derived. Then the system sum secrecy rate maximization problem subject to the total transmit power of the base station (BS) is formulated. Comprising the logarithms of the product of fractional quadratic functions, the sum secrecy rate expression is non-convex and difficult to tackle. In order to solve this problem, we employ semi-definite relaxation and first-order approximation based on Taylor expansion to transform the original problem into a convex problem.

2) In order to optimize the system sum secrecy rate in the case of the worst estimation error of direction angle toward each eavesdropper, we propose a maximum angle estimation error-SSRM (MAEE-SSRM) method. To design the robust signal beamforming matrix and AN beamforming matrix, first the upper and lower bounds of the estimated eavesdropping channel related coefficient are derived, then the system sum secrecy rate maximization problem based on the derived upper and lower bounds is constructed. Since the optimization problem is still non-convex, we use the change of the variable method to convert it into a convex problem and then solve it by convex optimization tools.

3) Through simulation and evaluation, we investigate the performance of our two proposed methods. We compare our methods with some typical DM methods such as ZF method [24] and SLNR method [25]. Simulation results show that our two proposed robust methods have much better sum secrecy rate than ZF method and SLNR method. Meanwhile the performance of our VMD-SSRM method is better than that of MAEE-SSRM method.

Notations: In this paper, we use boldface lowercase and uppercase letters to denote the vectors and matrices, respectively. AT, AH, Tr(A), rank(A) and Re{A} denote the transpose, the conjugate transpose, the trace, the rank and the real part of the matrix A, respectively. A⪰0 denotes that A is a positive semi-definite matrix. |⋅| and ∥⋅∥ denote the module of the scalars and the Frobenius norm of the matrices. E{⋅}, log(⋅), log10(⋅) and In(⋅) denote the statistical expectation, the logarithm to base 2, the logarithm to base 10 and the natural logarithm, respectively. ⟨x,y⟩ denotes the inner product of the vector x and y. Cm×n denotes the set of all complex m×n matrices. IM denotes an M×Midentity matrix. x∼CN(0,σ2)

with zero mean and variance

where λ is the wavelength of the transmit signal radio.

In the line of sight (LOS) communication scenarios, e.g., unmanned aerial vehicles (UAV) communication and suburban mobile communication, it is widely accepted to use free-space path loss model [26], given by

where PL(d) is the path loss in dB at a given distance d, f is the frequency of the transmit signal radio and c is the radio velocity. Then according to (1) and (3), the channel model between the transmit antenna array and the receiver can be expressed as

where zl is the AN signal sent by the BS. Then the received signal at the i-th destination user Di is given by

where the first term of the right hand side of (6) is the useful signal received by Di, the second one is the multiuser interference from other destination users, the third one is the AN, and the last one is the additive white Gaussian noise (AWGN) with nDi∼CN(0,σ2D).

Similarly, the signal received at the k-th eavesdropper Ek is

It should be noted that we consider the non-colluding eavesdropping scenario where each eavesdropper relies on itself to overhear and decode the messages and there is no information exchange between the eavesdroppers.

In this paper, the worst-case system sum secrecy rate is used to evaluate the system performance in the multiuser scenario, which can be expressed as

where Rs denotes the system sum secrecy rate, SINRDi and SINREk denote the signal-to-interference-plus-noise ratio (SINR) at the destination user Di and the eavesdropper Ek, respectively.

Then, according to (6), the SINR at the i-th destination user Di is

And according to (7), the SINR at the k-th eavesdropper Ek intending to intercept the i-th destination user is

Now, according to (8), (9) and (10), the optimization problem that maximizes the worst-case system sum secrecy rate under the constraint of the total transmit power of the BS is constructed as shown in (II-B) on the following page.

where ^θBEk is the estimated direction angle between the BS and the k-th eavesdropper, ΔθBEk denotes the estimation error which is assumed to follow the Von Mises distribution [27] over the interval [−Δθmax,Δθmax]. Note that Δθmax represents the maximum angle error and is a positive value up to the beamwidth between the first nulls [21].

The Von Mises distribution, also known as the circular normal distribution, is a continuous probability distribution on the circle and mainly describes the information related to the directional angles. In

The probability density function (PDF) of the Von Mises distribution is

where θ represents the estimation error of the direction angle, μ denotes the mean of θ, κ≥0 denotes the concentration parameter and controls the width of θ, and In with n=0 is the modified Bessel function of the first kind with order n computed by

In the previous section, the estimation error of the direction angle toward each eavesdropper has been modeled to follow the Von Mises distribution. Then in order to maximize the worst-case system sum secrecy rate, in this section, we propose a Von Mises distribution-SSRM (VMD-SSRM) robust DM scheme. The procedure of the proposed scheme, i.e., the design of the optimal beamforming matrices, will be illustrated as follows.

To simplify the expression, we define

where HBEk∈CN×N. The necessity of the expectation in (16) is explained as follows. If we remove the expectation, since ΔθBEk is a random variable, then HBEk would be random as well as the objective function of (II-B), and it would be very difficult to find a solution to (II-B).

In order to make (II-B) more tractable, we substitute the new matrix H(θBDi)=h(θBDi)hH(θBDi) as well as the positive semi-definite matrix variables Wi=wiwHi, Q=L∑l=1qlqHl into (II-B). Then the optimization problem (II-B) can be rewritten in a simple form as shown in (III) at the top of the next page.

By solving the problem (III), we can obtain the optimal information beamforming matrices {Wi} and the AN beamforming matrix Q. However, the objective function in (III) is non-convex and difficult to tackle, as it comprises the logarithms of the product of fractional quadratic functions. In order to solve this problem, we employ the semi-definite relaxation and the first-order approximation technique based on the Taylor expansion to transform the original problem into a convex problem [28]. Then this convex problem can be solved by using the convex optimization toolbox (CVX).

The specific process for converting (III) into a convex one is illustrated as follows. First, the exponential variables are used to substitute the numerators and denominators of the fractions in the objective function in (III), i.e.,

Then according to the properties of exponential and logarithmic functions, the objective function in (III) can be rewritten as

are the points around which the approximation are made. So the problem (II-B) eventually becomes

As a convex problem, (29) can be solved iteratively by the Algorithm 1 using the CVX optimization software. According to the definition, Wm has to satisfy rank(Wm)=1, so the optimal Wm of (29) should satisfy this rank-one constraint. Otherwise the randomization technology [29] would be utilized to get a rank-one approximation.

Similarly, the lower bound of |hH(θBEk)wm|2 is

It should be noted that in (31) and (32) the second-order error term ΔhHBEkwmwHmΔh% BEk is omitted because it is quite small compared to the other two terms. And note that the step (a) in (31) results from the following derivation process. According to the Cauchy-Schwarz inequality theorem, we have

is obviously true, then we can obtain the following inequality

The inequality in (35) holds with equality when and only when x and y are linearly dependent. The derivation of the step (a) in (31) is completed.

Similarly, the upper bound of |hH(θBEk)ql|2 is

and the lower bounds of |hH(θBEk)ql|2 is