Effective and accurate model selection is an important problem in modern data analysis. One of the major challenges is the computational burden required to handle large data sets that cannot be stored or processed on one machine. Another challenge one may encounter is the presence of outliers and contaminations that damage the inference quality. In this paper, we extend the recently studied "divide and conquer" strategy in Bayesian parametric inference to the model selection context, in which we divide the observations of the full data set into roughly equal subsets and perform inference and model selection independently on each subset. After local subset inference, we aggregate the posterior model probabilities or other model/variable selection criteria to obtain a final model, by using the notion of geometric median. We show how this approach leads to improved concentration in finding the "correct" model and also parameters, and how it is robust to outliers and data contamination. 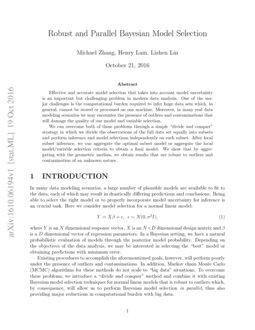 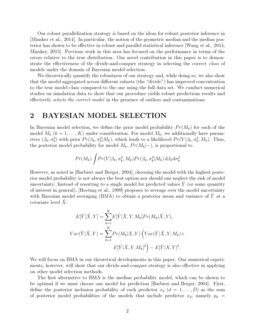 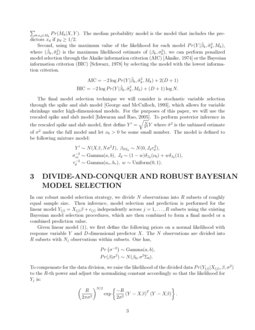 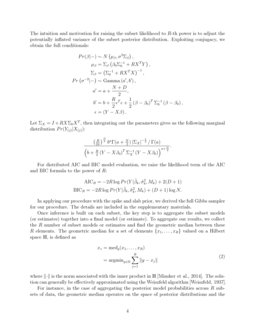 In many data modeling scenarios, many plausible models are available to fit to the data, each of which may result in drastically different predictions and conclusions. Being able to select the right model for inference is a crucial task. As our main example, we consider model selection for a normal linear model:

where Y is an N

X is an N×D dimensional design matrix and β is a D dimensional vector of regression parameters. Here the candidate models to be selected could refer to the sets of significant variables. In a Bayesian setting, we have a natural probabilistic evaluation of models through posterior model probabilities. Depending on the objectives of the data analysis, we may be interested in assessing the belief on which is the “best” model or obtaining predictions with minimum error.

Existing procedures to accomplish the aforementioned goals, however, will perform poorly under the presence of outliers and contaminations. In addition, Markov chain Monte Carlo (MCMC) algorithms for these methods do not scale to big data situations. The goal of this paper is to investigate a “divide-and-conquer” method that integrates with existing Bayesian model selection techniques, in a way that is robust to outliers and, moreover, allows us to perform Bayesian model selection in parallel.

Our “divide-and-conquer” strategy is based on the ideas for robust inference using the notion of the geometric median minsker2015geometric , especially the median posterior in the Bayesian context wang2014median ; minsker2014scalable

. Previous work in this area has focused on the performance in parametric inference. Our contribution in this paper is to demonstrate the effectiveness of these ideas in selecting the correct class of models on top of the parameters. In particular, we show that the model aggregated across different subsets (the “divide”) has improved concentration to the true model class compared to the one using the full data set. This concentration is in terms of the posterior model probabilities to the point mass assigned to the true model. The result also holds jointly with the concentration of the parameter estimates, and under the presence of outliers and hence demonstrates robustness. We carry out extensive numerical studies on simulation data and a real data example to demonstrate the performance of our proposed approach.

However, as noted in barbieri2004optimal , choosing the model with the highest posterior model probability is not always the best option nor should one neglect the risk of model uncertainty. Instead of resorting to a single model for predicted values ~Y (or some quantity of interest in general), hoeting1999bayesian

~Y at a covariate level ~X:

We will focus on BMA in our theoretical developments in this paper. Our numerical experiments, however, will show that our divide-and-conquer strategy is also effective in applying on other model selection methods.

The final model selection technique we will consider is stochastic variable selection through the spike and slab model george1993variable , which allows for variable shrinkage under high-dimensional models. For the purposes of this paper, we will use the rescaled spike and slab model ishwaran2005spike . To perform posterior inference in this model, we first define Y′=√N^σ2Y where ^σ2

is the unbiased estimate of

σ2 under the full model and let ν0>0 be some small number. The model is defined to be the following mixture model:

In our robust model selection strategy, we divide N observations into R subsets of roughly equal sample size. Then inference, model selection and prediction is performed for the linear model Y(j)=X(j)β+ϵ(j) independently across j=1,…,R subsets using the existing Bayesian model selection procedures, which are then combined to form a final model or a combined prediction value.

), we first define the following priors on a normal likelihood with response variable

Y and D-dimensional predictor X. The N observations are divided into R subsets with s observations within each subset. One has,

To compensate for the data division, we raise the likelihood of the divided data Pr(Y(j)|X(j),β,σ2) to the R-th power and adjust the normalizing constant accordingly so that the likelihood for Yj is:

The intuition and motivation for raising the subset likelihood to R-th power is to adjust the potentially inflated variance of the subset posterior distribution. Exploiting conjugacy, we obtain the full conditionals for data subset j=1,…,R:

Let ΣX=I+RX(j)Σ0XT(j), then integrating out the parameters gives us the following marginal distribution Pr(Y(j)|X(j)):

For distributed AIC and BIC model evaluation, we raise the likelihood term of the AIC and BIC formula to the power of R:

where ∥⋅∥ is the norm associated with the inner product in H minsker2014scalable . The solution can generally be effectively approximated using the Weiszfeld algorithm wes37 .

where Pr(Mk|X(j),Y(j)) is the posterior model probabilities for subset j, and ΠK denotes the space of distributions on K support points. The metric ∥⋅∥ here can be taken as the Euclidean metric, or an integral probability metric (IPM) defined as ||P−Q||=supf∈F∣∣∫f(x)d(P−Q)(x)∣∣ for some class of functions F sriperumbudur2010hilbert ; sriperumbudur2012empirical .

In this section we provide theoretical justification on the robustness in the divide-and-conquer strategy. In particular, we focus on BMA. Additionally, we show that the aggregated model class from our strategy concentrates faster, in terms of posterior model probabilities, to the correct class compared to using the whole data set at once. This concentration result can be joint with parameter estimation, and also applies in a way that exhibits robustness against outliers. Note that we do not raise the subset likelihood to R-th power in our current theoretical analysis, but the results can be generalized by imposing slightly stronger entropy conditions on the model.

Let S be the domain of θ=(Mk,β,σ2), our set of model indices and parameters. Let θ0 be the true data generating parameter, and let (X1,Y1) be a generic data point. Let p0(y|x):=p(y|x,θ0) be the true conditional density of Y1 given X1, and p0(x) be the true density of the covariates X1. We denote pθ(y|x):=p(y|x,θ). Let Pθ be the distribution defined by p0(x)×pθ(y|x) and P0 is the true distribution p0(x)×p0(y|x). For convenience, we denote P0f=P0f(X1,Y1)=Ep0[f(X1,Y1)] where Ep0[⋅] is the expectation under p0(y|x)×p0(x). We denote PN0 as the true probability measure taken on the data (X,Y) of size N and PN0f=EPN0[f(X,Y)]. Lastly, we denote D(ϵ,P,d) as the ϵ-packing number of a set of probability measures P under the metric d, which is the maximal number of points in P such that the distance between any pair is at least ϵ. We implicitly assume here that P is separable. The following Theorem 1 follows from a modification of Theorem 2.1 in ghosal2000 :

where PSN={p0(x)×pθ(y|x):θ∈SN} and dH is the Hellinger distance. Then we have

The proof of Theorem 1 is in the Appendix. As noted by ghosal2000 , the important assumptions are Assumptions 1 and 3. Essentially, Assumption 1 constrains the size of the parameter domain S to be not too big, whereas Assumption 3 ensures sufficient mass of the prior on a neighborhood of the true parameter. The concentration result (4) states that the posterior distribution of θ is close to the true θ0 with high probability, where the closeness is measured in terms of the Hellinger distance between the likelihoods. Note that the RHS of (4) consists of three terms. The dominant term is the power-law decay in Nε2N. The other two exponential decay terms result from technical arguments in the existence of tests that sufficiently distinguish between distributions birge1983approximation ; le2012asymptotic .

Next we describe the concentration behavior of BMA. We focus on the situations where all the candidate models are non-nested, i.e. only one model contains distributions that are arbitrarily close to the truth. Without loss of generality, we let M1 be the true model.

Suppose the assumptions in Theorem 1 hold. Also assume that, for sufficiently small ϵ>0, d(Pθ,P0)>ϵ for any θ∈S−1:={(Mk,β,σ2):k≠1}. Let L be the same universal constant arising in Theorem 1. We have

Proof of 1. Consider large enough N and fix a sufficiently large T>0. We have

The result then follows from Theorem 1, which implies that (10) occurs with probability at least

Note that the assumption d(Pθ,P0)>ϵ for any θ∈S−1 and sufficiently small ϵ is a manifestation of the non-nested model situation, asserting that only one model is “correct”. Result 1

is a concentration on the posterior probability of picking the correct model to be close to 1.

Result 2 translates this in terms of the Euclidean distance between the model posterior probability and the point mass on the correct model. Result 3 is an alternative using the Hellinger distance. Note that the concentration bound for Hellinger distance (7) is inferior to that for Euclidean distance (6) for small δ since δ2 instead of δ shows up in the RHS of (7). This is because in our proof, the function √(1−√1−δ)2+δ that appears in (14) has derivative 1/(2√(1−δ)((1−√1−δ)2+δ)) which is ∞ at δ=0, and thus no linearization is available when δ is close to 0.

Theorem 2 can be modified to handle the case where multiple models contain the truth. In particular, the expression inside the probability in (5) becomes

where M is the collection of all r such that Mr contains the true model. In (6) and (7), the use of e1 is replaced by an existence of some probability vector (dependent on N) supported on the indices in Mr. In other words, one now allows comparing with an arbitrary allocation of probability masses to all true models in the concentration bound. These modifications can be seen by following the arguments in the proof of Theorem 2. Specifically, (9) would be modified as

The following result states how a divide-and-conquer strategy can improve the concentration rate of the posterior model probabilities towards the correct model:

The significance of Theorem 3 is the improvement of the concentration from power-law decay in Theorem 2 to exponential decay, as the number of subsets grows. Such type of results is known in the case of parameter estimation (e.g., wang2014median ; minsker2014scalable ). Theorem 3 generalizes to the case of model selection. Results 1 and 2 describe the exponential concentration for the model posteriors to the correct model, while Result 3 states the joint concentration in both the model posterior and the parameter posterior given the correct model, when one adopts a second layer of divide-and-conquer on the parameter posterior conditional on each individual candidate model. Result 3 in particular combines with the parameter concentration result in minsker2014scalable .

Note that we have taken a hybrid viewpoint here that we assume a “correct” model and parameters in a frequentist sense. Under this view, a posterior probability more concentrated towards the truth is more desirable. This constitutes our main claim that the divide-and-conquer strategy is attractive. This view has been used in existing work like wang2014median ; minsker2014scalable .

Finally, the following theorem highlights that the concentration improvement still holds even if the data are contaminated to a certain extent:

the conclusion of Theorem 3 still holds.

Theorem 4 stipulates that when a small number of subsets are contaminated by arbitrary nature, the geometric median approach still retains the same exponential concentration.

Proofs of Theorems 3 and 4.

The proofs of both theorems rely on a key theorem on geometric median in minsker2015geometric , restated in the Appendix. We focus on Theorem 3, as the proof for Theorem 4 is a straightforward modification in light of Theorem 5.

Proof of 1. Immediate by noting that

Proof of 2. Note that