In recent years, face detection has experienced significant performance improvement with the boost of deep convolutional neural networks. In this report, we reimplement the state-of-the-art detector SRN and apply some tricks proposed in the recent literatures to obtain an extremely strong face detector, named VIM-FD. In specific, we exploit more powerful backbone network like DenseNet-121, revisit the data augmentation based on data-anchor-sampling proposed in PyramidBox, and use the max-in-out label and anchor matching strategy in SFD. In addition, we also introduce the attention mechanism to provide additional supervision. Over the most popular and challenging face detection benchmark, i.e., WIDER FACE, the proposed VIM-FD achieves state-of-the-art performance. 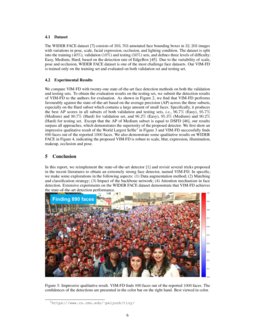 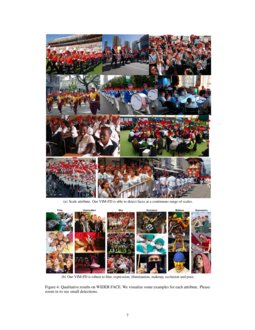 . These approaches first obtain a manageable number of region proposals called region of interest (RoI) and then pool out the corresponding features. In the second stage, R-CNN classifies and regresses each RoI again. By constract, one-stage detectors have the advantage of simple structures and high speed. SSD

[16] and YOLO [17, 18] have achieved good speed/accuracy trade-off. However, they can hardly surpass the accuracy of two-stage detectors. RetinaNet [19] is the state-of-the-art one-stage detector that achieves comparable performance to two-stage detectors. It adopts an architecture modified from RPN [20] and focuses on addressing the class imbalance during training.

introduces a new intersection-over-union loss function. The performances on several well-known datasets have been improved consistently, even tend to be saturated.

In this paper, we reimplement the state-of-the-art detector [1] and utilize it as our baseline model. Then we revisit several proposed tricks from the following aspects: (1) Data augmentation method; (2) Matching and classification strategy; (3) Impact of the backbone network; (4) Attention mechanism in face detection. Through the organic integration of these tricks, we obtain a very powerful face detector, which achieves state-of-the-art result on WIDER FACE dataset.

Face detection has been a challenging research field since its emergence in the 1990s. Viola and Jones pioneer to use Haar features and AdaBoost to train a face detector with promising accuracy and efficiency [21], which inspires several different approaches afterwards [22, 23]. Apart from those, another important work is the introduction of Deformable Part Model (DPM) [24].

designs a novel network to directly generate a clear super-resolution face from a blurry small one.

The overall framework of VIM-FD is shown in Figure 1, we describe each component as follows.

The original detector [1] adopts ResNet-50 [11] as the backbone network, which is a little bit obsolete currently. We explore several more powerful backbone network, such as ResNeXt [41], DenseNet [2] and NASNet [42]. Finally we adopt DenseNet-121 with 6-level feature pyramid structure as the backbone network for VIM-FD. The feature maps extracted from those four blocks are denoted as C2, C3, C4, and C5, respectively. C6 and C7 are just extracted by two simple down-sample 3×3 convolution layers after C5. The lateral structure between the bottom-up and the top-down pathways is the same as [14]. P2, P3, P4, and P5 are the feature maps extracted from lateral connections, corresponding to C2, C3, C4, and C5 that are respectively of the same spatial sizes, while P6 and P7 are just down-sampled by two 3×3 convolution layers after P5.

where i is the index of anchor in a mini-batch, pi and qi are the predicted confidence of the anchor i being a face in the first and second steps, l∗i is the ground truth class label of anchor i, Ns1 and Ns2 are the numbers of positive anchors in the first and second steps, Ω represents a collection of samples selected for two-step classification, and Φ represents a sample set that remains after the first step filtering. The binary classification loss LFL is the sigmoid focal loss over two classes (face vs. background).

where g∗i is the ground truth location and size of anchor i, xi is the refined coordinates of the anchor i in the first step, ti is the coordinates of the bounding box in the second step, Ψ represents a collection of samples selected for two-step regression, l∗i and Φ are the same as defined in STC. Similar to Faster R-CNN [12], we use the smooth L1 loss as the regression loss Lr. The Iverson bracket indicator function [l∗i=1] outputs 1 when the condition is true, i.e., l∗i=1 (the anchor is not the negative), and 0 otherwise. Hence [l∗i=1]Lr indicates that the regression loss is ignored for negative anchors.

Recently, attention mechanism is applied continually in object detection and face detection. DES [6] utilizes the idea of weakly supervised semantic segmentation, to provide high semantic meaningful and class-aware features to activate and calibrate feature map used in the object detection. FAN [5] introduces anchor-level attention to highlight the features from the facial regions and successfully relieving the risk from the false positives.

where mi is the predicted attention map generated per level in the second step, m∗i is the ground truth attention mask of the i th detection layer, X represents the set of detection layers applied to attention mechanism (i.e., P2, P3, P4, P5, P6 and P7), and Lsig is pixel-wise sigmoid cross entropy loss.

S3FD [4] introduces max-out background label to reduce the false positives of small negatives. PyramidBox [3] uses this strategy on both positive and negative samples. In specific, this strategy first predicts cp+cn scores for each prediction module, and then selects maxcp as the positive score. Similarly, it chooses the max score of cn to be the negative score. In our VIM-FD, we employ the max-in-out label in the classification subnet, and set cp=3 and cn=3 to recall more faces and reduce false positives simultaneously.

The design of anchor scale and ratio keeps same with [1]. At each pyramid level, we use two specific scales of anchors as same as [1] (i.e., 2S and 2√2S, where S

i.e., 1.25). In total, there are A=2 anchors per level and they cover the scale range 8−362 pixels across levels with respect to the network’s input image.

During the training phase, anchors need to be divided into positive and negative samples. Specifically, anchors are assigned to ground-truth face boxes using an intersection-over-union (IoU) threshold of θp; and to background if their IoU is in [0,θn). If an anchor is unassigned, which may happen with overlap in [θn,θp), it is ignored during training. Empirically, we set θn=0.3 and θp=0.7 for the first step, and θn=θp=0.35 for the second step. This setting draws on the scale compensation anchor matching strategy in S3FD [4], aiming to improve the recall rate of small faces. The setting is based on the observation that faces whose scale distribute away from anchor scales can not match enough anchors. To solve this issue, we decrease the IoU threshold to increase the average number of matched anchors. The scale compensation anchor matching strategy greatly increases the matched anchors of tiny and outer faces, which notably improves the recall rate of these faces.

We employ the data-anchor-sampling method in PyramidBox [3] to diversify the scale distribution of training samples and construct a robust model. Specifically, we first randomly select a face of size Sface in a batch. Let

be the index of the nearest anchor scale from the selected face, then we choose a random index itarget in the set {0,1,…,min(5,ianchor+1)}, thus we get the image resize scale

By resizing the original image with the scale S∗ and cropping a standard size of 640×640 containing the selected face randomly, we get the anchor-sampled training data.

We append a hybrid loss at the end of the deep architecture to jointly optimize model parameters, which is just the sum of the STC loss, the STR loss and the ATT loss:

The backbone network is initialized by the pretrained DenseNet-121 model [43] and all the parameters in the newly added convolution layers are initialized by the “xavier” method. We fine-tune the model using SGD with 0.9 momentum, 0.0001 weight decay, and batch size 32. We set the learning rate to 10−2 for the first 100epochs, and decay it to 10−3 and 10−4 for another 20 and 10

The WIDER FACE dataset [7] consists of 393,703 annotated face bounding boxes in 32,203 images with variations in pose, scale, facial expression, occlusion, and lighting condition. The dataset is split into the training (40%), validation (10%) and testing (50%) sets, and defines three levels of difficulty: Easy, Medium, Hard, based on the detection rate of EdgeBox [45]. Due to the variability of scale, pose and occlusion, WIDER FACE dataset is one of the most challenge face datasets. Our VIM-FD is trained only on the training set and evaluated on both validation set and testing set.

We compare VIM-FD with twenty-one state-of-the-art face detection methods on both the validation and testing sets. To obtain the evaluation results on the testing set, we submit the detection results of VIM-FD to the authors for evaluation. As shown in Figure 2, we find that VIM-FD performs favourably against the state-of-the-art based on the average precision (AP) across the three subsets, especially on the Hard subset which contains a large amount of small faces. Specifically, it produces the best AP scores in all subsets of both validation and testing sets, i.e., 96.7% (Easy), 95.7% (Medium) and 90.7% (Hard) for validation set, and 96.2% (Easy), 95.3% (Medium) and 90.2% (Hard) for testing set. Except that the AP of Medium subset is equal to DSFD [46], our results surpass all approaches, which demonstrates the superiority of the proposed detector. We first show an impressive qualitative result of the World Largest Selfie111https://www.cs.cmu.edu/~peiyunh/tiny/ in Figure 3 and VIM-FD successfully finds 890 faces out of the reported 1000 faces. We also demonstrate some qualitative results on WIDER FACE in Figure 4, indicating the proposed VIM-FD is robust to scale, blur, expression, illumination, makeup, occlusion and pose.

In this report, we reimplement the state-of-the-art detector [1] and revisit several tricks proposed in the recent literatures to obtain an extremely strong face detector, named VIM-FD. In specific, we make some explorations in the following aspects: (1) Data augmentation method; (2) Matching and classification strategy; (3) Impact of the backbone network; (4) Attention mechanism in face detection. Extensive experiments on the WIDER FACE dataset demonstrate that VIM-FD achieves the state-of-the-art detection performance.