Robots as Actors in a Film: No War, A Robot Story

Will the Third World War be fought by robots? This short film is a light-hearted comedy that aims to trigger an interesting discussion and reflexion on the terrifying killer-robot stories that increasingly fill us with dread when we read the news headlines. The fictional scenario takes inspiration from current scientific research and describes a future where robots are asked by humans to join the war. Robots are divided, sparking protests in robot society... will robots join the conflict or will they refuse to be employed in human warfare? Food for thought for engineers, roboticists and anyone imagining what the upcoming robot revolution could look like. We let robots pop on camera to tell a story, taking on the role of actors playing in the film, instructed through code on how to "act" for each scene. 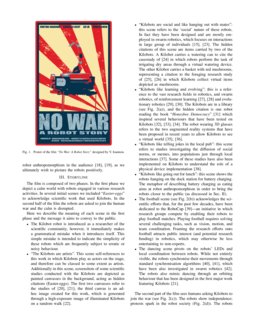 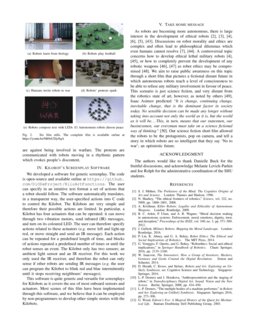 Among the other functions art has, art is a form of communication that humans have used throughout history [1]. Art can be effective at provoking a reaction in its public and our art aims to stimulate a reflection on the use of robotics in warfare. Our piece of art comes in the form of a short film in which we touch the highly discussed and controversial topic of military robots [2, 3, 4, 5] through a simple light-hearted comedy.

We created a film111The film is available online at https://youtu.be/Mt9nUDjrSqA as we consider it an accessible means of communication to reach the general public. The aim is to raise public awareness on the ethical discussion concerning the use of robots in war [2, 4, 6, 7]. While this film does not impose a view on this matter, it pictures a fictional scenario in which robots may reach a level of independence to allow them to make free decisions against humans’ requests for violence.

We employ the robots as the main tool in creating our film. The robots take on the role of actors as physical bodies in front of a video camera, interacting with each other on the stage. Robots are coded to follow the script of each scene and react to actions of others. We generated a screenplay-software for our robots to quickly program them to follow the screenplay of each scene. This software, freely available online (see Sec. IV), is not limited to this film, but is in fact designed to allow the robots to follow generic screenplays.

Art and science have since always been strongly connected [8], therefore the rise of robotics is also having an impact on art [9]. In this work, we put robots on stage. This has already been done in various art performances, including live theatrical shows [10, 11], and it traces back to the eighteenth century with the appearance of mechanical automata [12, 13]. In our work, we employ the Kilobot robots [14] as actors. They are small simple robots that have been widely used in several swarm robotics studies [15].

It could be argued as to whether the robots are indeed acting or not, as they lack of any consciousness and because there is a decoupling between the physical body on the stage (the mechanical robot) and the source of the actions coded by the engineer (behind the scenes). This decoupling is still an open topic of discussion in theatrical performances with puppets [16, 17]. In our work, the engineer takes the role of the director to instruct the robots about the screenplay. The communication happens in the form of C code uploaded to the robots which, differently from string-operated puppets, are autonomous agents throughout the performance. The acting performance of a human actor is much richer and more complex than our programmed robots, however we believe it could still represent a much simpler form of acting. Considering robots as art performers is a recent trend that is gaining attention [9, 10] and we believe that it is a promising direction both for engineering and art.

Our art piece follows the film format by including various elements particular to cinematography. We included a short trailer of the film222The film trailer is available online at https://vimeo.com/320804400, a film poster (see Fig. 1), and final sliding credits in which robots are listed as actors and the authors of this paper fill various film production roles (e.g. the code programmer is listed as the cast director, and the project supervisor as the film producer).

Kilobots are simple robots with minimal capabilities. As they cannot produce any synthesised speech waveform, the dialogs are therefore implemented via speech balloons. Still Kilobots are able to produce sounds, in fact they move powering two vibration motors that let them vibrate on the ground causing a buzzing sound. We exploited this peculiar vibration sound to express the robots’ intent. In particular, we used this sound to mimic laughter and to give rhythm to the protest march (see more details in Sec. III). Finally, as all Kilobots are identical robots, we added distinctive decorations, such as a moustache or glasses, to give most of them a recognisable character. Our goal was to stimulate robot anthropomorphism in the audience [18, 19], as we ultimately wish to picture the robots positively.

The film is composed of two phases. In the first phase we depict a calm world with robots engaged in various research activities. In several initial scenes we included “Easter-eggs” to acknowledge scientific work that used Kilobots. In the second half of the film the robots are asked to join the human war and the calm is disrupted.

Here we describe the meaning of each scene in the first phase and the message it aims to convey to the public.

The second part of the film sees humans asking Kilobots to join the war (see Fig. 2(c)). The robots show independence; protests spark in the robot society (Fig. 2(d)). The robots are against being involved in warfare. The protests are communicated with robots moving in a rhythmic pattern which evokes people’s discontent.

We developed a software for generic screenplay. The code is open-source and available online at

https://github.com/DiODeProject/KiloArtFunctions. The user can specify in an intuitive text format a set of actions that a robot should follow. The software automatically translates, in a transparent way, the user-specified actions into C code to control the Kilobot. The Kilobots are very simple and therefore their possible actions are limited. In particular, a Kilobot has four actuators that can be operated: it can move through two vibration motors, send infrared (IR) messages, and turn on its coloured LED. The user can therefore specify actions related to these actuators (e.g. move left and light-up red, or move straight and send an IR message). Each action can be repeated for a predefined length of time, and blocks of actions repeated a predefined number of times or until the robot senses an event. The Kilobot only has two sensors; an ambient light sensor and an IR receiver. For this work we only used the IR receiver, and therefore the robot can only sense if other robots are sending IR messages (e.g. the user can program the Kilobot to blink red and blue intermittently until it stops receiving neighbours’ messages).

This software is quite generic and versatile for screenplays for Kilobots as it covers the use of most onboard sensors and actuators. Most scenes of this film have been implemented through this software, and we believe that it can be employed by non-programmers to develop other simple stories with the Kilobots.

As robots are becoming more autonomous, there is large interest in the development of ethical robots [2, 3, 4, 6, 5, 43]. Discussions on robot morality and ethics are complex and often lead to philosophical dilemmas which even humans cannot resolve [7, 44]. A controversial topic concerns how to develop ethical lethal military robots [4, 45], or how to completely prevent the development of any robotic weapons [46, 47] as robot ethics may be compromised [48]. We aim to raise public awareness on this topic through a short film that pictures a fictional distant future in which autonomous robots reach a level of consciousness to be able to refuse any military involvement in favour of peace. This scenario is just science fiction, and very distant from the robotics state of art, however, as noted by others [49], Isaac Asimov predicted “It is change, continuing change, inevitable change, that is the dominant factor in society today. No sensible decision can be made any longer without taking into account not only the world as it is, but the world as it will be…This, in turn, means that our statesmen, our businessmen, our everyman must take on a science fictional way of thinking” [50]. Our science fiction short film allowed the robots to be the protagonists, pop on camera, and tell a story in which robots are so intelligent that they say ‘No to war’; an optimistic future.

The authors would like to thank Danielle Buck for the fruitful discussions, and acknowledge Melanie Levick-Parkin and Joe Rolph for the administrative coordination of the SHU students.