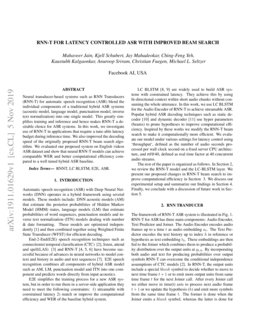 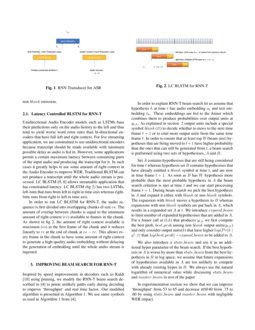 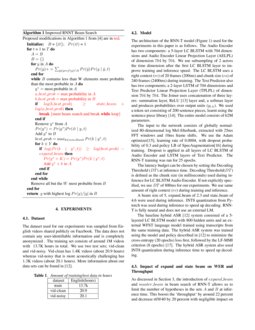 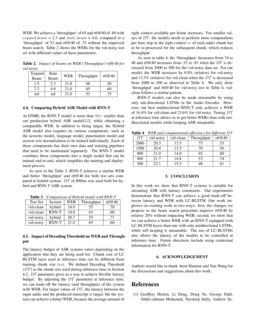 End-2-End(E2E) speech recognition techniques such as connectionist temporal classification (CTC)  [graves2006connectionist], listen, attend and spell(LAS)  [las] and RNN-T [rnnt-graves, rnnt_arch, streaming_rnnt] have become successful because of advances in neural networks to model context and history in audio and text sequences [sak2014long]. E2E speech recognition combines all components of hybrid ASR model such as AM, LM, punctuation model and ITN into one component and predicts words directly from input acoustics.

E2E simplifies the training process for a new ASR system, but in order to run them in a server-side application they need to meet the following constraints: 1) streamable with constrained latency 2) match or improve the computational efficiency and WER of the baseline hybrid system.

LC BLSTM [lcblstm2, lcblstm_xue] are widely used to build ASR systems with constrained latency. They achieve this by using bi-directional context within short audio chunks without consuming the whole utterance. In this work, we use LC BLSTM for the Audio Encoder of RNN-T to achieve streamable ASR. Popular hybrid ASR decoding techniques such as static decoder [povey2011kaldi] and dynamic decoder [dynamic_decoder] use hyper parameters (beams) to prune hypotheses to improve computational efficiency. Inspired by these works we modify the RNN-T beam search to make it computationally more efficient. We evaluate our model under various settings for latency control using ‘throughput‘, defined as the number of audio seconds processed per wall clock second on a fixed server CPU architecture, and rtf@40, defined as real time factor at 40 concurrent audio streams.

The rest of the paper is organized as follows. In Section 2, we review the RNN-T model and the LC-BLSTM layer. We present our proposed changes in RNN-T beam search to improve computational efficiency in Section  3. We discuss our experimental setup and summarize our findings in Section 4. Finally, we conclude with a discussion of future work in Section 5.

The framework of RNN-T ASR system is illustrated in Fig. 1. RNN-T for ASR has three main components: Audio Encoder, Text Predictor and Joiner. The Audio Encoder encodes audio frames up to a time t as audio embedding at. The Text Predictor encodes the text history up to index h in reference or hypothesis as text embedding th

. These embeddings are then fed to the Joiner which combines them to produce a probability distribution over the output units at

yt,h. By incorporating both audio and text for producing probabilities over output symbols RNN-T can overcome the conditional independence assumptions of CTC models [graves2006connectionist]. In RNN-T, the output units include a special blank symbol to decide whether to move to next time frame t+1 or to emit more output units from same time frame t for the next Joiner call. After every Joiner call we either move in time(t) axis to process next audio frame t+1 or we update the hypothesis (h) and emit more symbols from the same time frame t. The former is done when the Joiner emits a blank symbol, whereas the latter is done for non blank emission.

Unidirectional Audio Encoder models such as LSTMs base their predictions only on the audio history to the left and thus tend to yield worse word error rates than bi-directional encoders that have full left and right context. For live streaming application, we are constrained to use unidirectional encoders because transcript should be made available with minimum possible delay as audio is fed in. However, some applications permit a certain maximum latency between consuming parts of the input audio and producing the transcript for it. In such cases it greatly helps to use some amount of right context in the Audio Encoder to improve WER. Traditional BLSTM can not produce a transcript until the whole audio stream is processed. LC BLSTM [lcblstm_xue, lcblstm2] allows streamable application that has constrained latency. LC BLSTM (fig 2) has two LSTMs, left-lstm that runs from left to right in time axis whereas right-lstm runs from right to left in time axis.

Euclid’s Algorithm: An example of how to write algorithms in LaTeX

Inspired by speed improvements in decoders such as Kaldi [povey2011kaldi] using pruning, we modify the RNN-T beam search described in [rnnt-graves] to prune unlikely paths early during decoding to improve ‘throughput‘ and real time factor. Our modified algorithm is presented in Algorithm 1. We use same symbols as used in Algorithm 1 from [rnnt-graves].

In order to explain RNN-T beam search let us assume that hypothesis h at time t has audio embedding at and text embedding th. These embeddings are fed to the Joiner which combines them to produce probabilities over output units at yt,h. As explained in section  2 output units include a special symbol blank (∅) to decide whether to move to the next time frame t+1 or to emit more output units from the same time frame t. In order to ensure that at-least top W(beam size) hypotheses that are being moved to t+1 have higher probability than the ones that can still be generated from t, a beam search is performed using two sets of hypothesises, A and B.

Set A contains hypothesises that are still being considered for time t whereas hypothesis set B contains hypothesises that have already emitted a blank symbol at time t, and are now in time frame t+1. As soon as B has W hypotheses more probable than the most probable hypothesis in A the beam search criterion is met at time t and we can start processing frame t+1. During beam search we pick the best hypothesis in A and expand it either with blank or non blank symbols. The expansion with blank moves a hypothesis to B whereas expansions with non blank symbols are put back in A, which results in a expanded set A at t. We introduce expand_beam to limit number of expanded hypothesises that are added in A. For a Joiner call at (t,h) that produces yt,h we first compute the best prob, best_prob among non blank output units(yt,h) and only consider output units(k) that have higher log(Pr(k∣y∗,t) than log(best_prob)−expand_beam to be added to A.

In experimentation section we show that we can improve ‘throughput‘ from 53 to 65 and decrease rtf@40 from .75 to .60 by using state_beam and master_beam with negligible WER impact.

The dataset used for our experiments was sampled from English videos shared publicly on Facebook. The data does not contain any user-identifiable information and is completely anonymized . The training set consists of around 1M videos with  13.7K hours in total. We use two test sets; vid-clean and vid-noisy. Vid-clean has 1.4K videos (about 20.9 hours) whereas vid-noisy that is more acoustically challenging has 1.3K videos (about 20.1 hours). More information about our data sets can be found in [base_hybrid_training].

The architecture of the RNN-T model (Figure 1) used for the experiments in this paper is as follows. The Audio Encoder has two components: a 5-layer LC BLSTM with 704 dimensions and Audio Encoder Linear Projection Layer (AELPL) of dimension 704 by 704. We use subsampling of 2 across the time dimension after the first LC BLSTM layer to improve training and inference speed. The LC BLSTM uses a right context (rc) of 20 frames (200ms) and chunk size (cs) of 240 frames (2400ms) during training. The Text Predictor also has two components; a 2-layer LSTM of 704 dimensions and Text Predictor Linear Projection Layer (TPLPL) of dimension 704 by 704

layer and, a softmax layer and produces probabilities over output units (

The input to the network consists of globally normalized 80-dimensonal log Mel-filterbank, extracted with 25ms FFT windows and 10ms frame shifts. We use the Adam optimizer[kingma2014adam], learning rate of 0.0004, with dropout probability of 0.3 and policy LB of SpecAugmentation[spec_aug]

during training. Dropout is applied in all layers of LC BLSTM of Audio Encoder and LSTM layers of Text Predictor. The RNN-T training was ran for 25 epochs.

The latency budget can be chosen by setting the Decoding Threshold (DT) at inference time. Decoding Threshold(DT) is defined as the chunk size (in milliseconds) used during inference for LC BLSTM Audio Encoder. If not explicitly specified, we use DT of 800ms for our experiments. We use same amount of right context (rc) during training and inference.

4.3 Impact of expand and state beam on WER and Throughput

As discussed in Section 3, the introduction of expand_beam and master_beam in beam search of RNN-T allows us to limit the number of hypotheses in the sets A and B at inference time. This boosts the ‘throughput‘ by around 22 percent and decrease rtf@40 by 20 percent with negligible impact on WER. We achieve a ‘throughput‘ of 65 and rtf@40 of .60 with expand_beam = 2.3 and state_beam = 4.6, compared to a ‘throughput‘ of 53 and rtf@40 of .75 without the improved beam search. Table 2 shows the WERs for the vid-noisy test set with different values of these parameters.

At 65MB, the RNN-T model is more than 10× smaller than our production hybrid ASR model[base_hybrid_training], while obtaining a comparable WER. In addition to being larger, the Hybrid ASR model also requires its various components, such as the acoustic model, language model, punctuation model and inverse text normalization to be trained individually. Each of these components has their own data and training pipelines that need to be maintained separately. The RNN-T model combines these components into a single model that can be trained end-to-end, which simplifies the training and deployment process.

As seen in the Table 3, RNN-T achieves a similar WER and better ‘throughput‘ and rtf@40 for both test sets compared to hybrid system. DT of 800ms was used both for hybrid and RNN-T ASR system.

4.5 Impact of Decoding Threshold on WER and Throughput

The latency budget of ASR systems varies depending on the application that they are being used for. Chunk size of LC BLSTM layer used at inference time can be different from training chunk size (cs). We defined Decoding Threshold (DT) as the chunk size used during inference time in Section 4.2. DT parameter gives us a way to achieve flexible latency budget. By adjusting the DT parameter at inference time, we can trade-off the latency (and throughput) of the system with WER. For larger values of DT, the latency between the input audio and the produced transcript is larger, but the system can achieve a better WER, because the average amount of right context available per frame increases. For smaller values of DT, the models needs to perform more computations per time step as the right context rc of each audio chunk has to be re-processed for the subsequent chunk, which reduces throughput.

RNN-T models can also be made streamable by using only uni-directional LSTMs in the Audio Encoder. However, our best unidirectional RNN-T only achieves a WER of 16.4% for vid-clean and 23.6% for vid-noisy. Tuning DT at inference time allows us to get better WERs than with unidirectional models while keeping ASR streamable.

In this work we show that RNN-T systems is suitable for streaming ASR with latency constraints. Our experiments demonstrate that RNN-T can achieve a good trade-off between latency and WER with LC-BLSTM. Our work improves on existing work in two ways: first, the changes we propose to the beam search procedure improve rtf@40 by relative 20% without impacting WER; second, we show that we can achieve a better WER with an RNN-T equipped with LC-BLSTM layers than one with only unidirectional LSTMs, while still keeping it streamable. The use of LC-BLSTMs also allows the latency of the models to be controlled at inference time. Future directions include using contextual information for RNN-T.

Authors would like to thank Awni Hannun and Yun Wang for the discussions and suggestions about this work.