In this paper, multi-unmanned aerial vehicle (UAV) enabled mobile edge computing (MEC), i.e., UAVE is studied, where several UAVs are deployed as flying MEC platform to provide computing resource to ground user equipments (UEs). Compared to the traditional fixed location MEC, UAV enabled MEC (i.e., UAVE) is particular useful in case of temporary events, emergency situations and on-demand services, due to its high flexibility, low cost and easy deployment features. However, operation of UAVE faces several challenges, two of which are how to achieve both 1) the association between multiple UEs and UAVs and 2) the resource allocation from UAVs to UEs, while minimizing the energy consumption for all the UEs. To address this, we formulate the above problem into a mixed integer nonlinear programming (MINLP), which is difficult to be solved in general, especially in the large-scale scenario. We then propose a Reinforcement Learning (RL)-based user Association and resource Allocation (RLAA) algorithm to tackle this problem efficiently and effectively. Numerical results show that the proposed RLAA can achieve the optimal performance with comparison to the exhaustive search in small scale, and have considerable performance gain over other typical algorithms in large-scale cases. 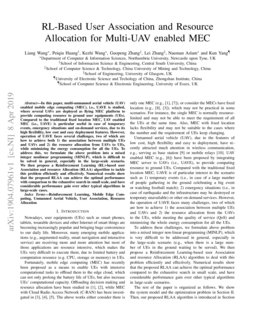 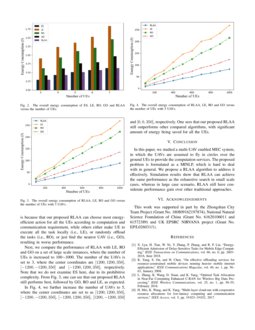 Nowadays, user equipments (UEs) such as smart phones, tablets, wearable devices and other Internet of smart things are becoming increasingly popular and bringing huge convenience to our daily life. Moreover, many emerging mobile applications (e.g., augmented reality, smart navigation and interactive service) are receiving more and more attention but most of those applications are resource intensive, which makes the UEs very difficult to execute them, due to limited battery and computation resource (e.g. CPU, storage or memory) in UEs.

Fortunately, mobile edge computing (MEC) has recently been proposed as a means to enable UEs with intensive computational tasks to offload them to the edge cloud, which can not only prolong the battery life of UEs, but also increase UEs’ computational capacity. Offloading decision making and resource allocation have been studied in [1, 2], while MEC with Cloud Radio Access Network (C-RAN) has been investigated in [3, 4, 5]. The above works either consider there is only one MEC (e.g., [1, 7]), or consider the MECs have fixed location (e.g., [8, 3]), which may not be practical in some scenarios. For instance, the single MEC is normally resource-limited and may not be able to meet the requirement of all the UEs at the same time. Also, MEC with fixed location lacks flexibility and may not be suitable to the cases where the number and the requirement of UEs keep changing.

Unmanned aerial vehicle (UAV), due to the features of low cost, high flexibility and easy to deployment, have recently attracted much attention in wireless communication, e.g., serving as base station [9] or mobile relays [10]. UAV enabled MEC (e.g., [6]) have been proposed by integrating MEC server to UAVs (i.e., UAVE), to provide computing resource to ground UEs. Compared with the traditional fixed location MEC, UAVE is of particular interest to the scenario such as 1) temporary events (i.e., in case of a large number of people gathering in the ground celebrating a big event or watching football match); 2) emergency situations (i.e., in case of earthquake and the infrastructure may be destroyed or temporary unavailable) or other on-demand services. However, the operation of UAVE faces many challenges, two of which are how to achieve 1) the association between multiple UEs and UAVs and 2) the resource allocation from the UAVs to the UEs, while meeting the quality of service (QoS) and minimizing the whole energy consumption for all the UEs.

To address these challenges, we formulate above problem into a mixed integer non-linear programming (MINLP), which is very difficult to be addressed in general, especially in the large-scale scenario (e.g., when there is a large number of UEs in the ground waiting to be served). We then propose a Reinforcement Learning-based user Association and resource Allocation (RLAA) algorithm to deal with this problem efficiently and effectively. Numerical results show that the proposed RLAA can achieve the optimal performance compared to the exhaustive search in small scale, and have considerable performance gain over other typical algorithms in large-scale scenarios.

The rest of the paper is organized as follows. We show the system model and the optimization problem in Section II. Then, our proposed RLAA algorithm is introduced in Section III. The simulation result is given in Section IV, followed by the conclusion remarks in Section V.

Similar to [3], assume i-th UE has a computational intensive task Ii to be executed as

where Fi denotes the total number of CPU cycles required to complete this task and Di denotes the amount of data needed to be transmitted to UAV if deciding to offload, in which Di and Fi can be obtained by using the approaches provided in [11]. Assume that each UE can decide either to execute the task locally or choose to offload to one of the UAVs in one time slot and also assume that the task can be completed in this time slot. Similar to [1], we do not consider the time for returning the results back to UE from UAV. Thus, one can have

Also, assume that the j-th (j∈M) UAV can serve more than one UE in each time slot and this task has to be completed either via offloading or local execution. Therefore, one can have

In offloading scenario, we assume the horizontal distance between i-th UE and the j-th UAV in t-th time slot as

Then, the offloading data rate can be given by

Also, one can see that the time to offload the data from i-th UE to the j-th UAV in t-th time interval can be given as

Also, the time to execute the task can be expressed as

where fijt is the computation resource that the jth UAV could provide to the i-th UE. Then, we can have the total time consumption as

Moreover, the total energy consumption of the i-th UE to the j-th UAV in t-th time slot can be given as

Similar to [1], we assume each UAV in every time slot can only accept limited amount of offloaded task. Then, one has

where K is the maximal number of UEs that each UAV can accept in each time slot.

If the UE decides to execute the task locally, the power consumption for the i-th UE can be given by ki(fijt)vi, where j=0, t=0, and ki ≥ 0 is the effective switched capacitance and vi can be normally to 3 [1]. Then, the local execution time can be given by TCijt=Fifijt, (j=0, t=0) and then, the total energy consumption can be given as ki(fijt)viTCijt.

Then, one can have the energy consumption of each UE as

Also, the total time spent to complete each task can be expressed as

One can assume that the maximal computation resource which the j-th UAV can provide is as fmaxj. Then, one can have

Note that the above problem P is a MINLP problem, which is difficult to be solved optimally in general. Some existing algorithms like exhaustive search or branch and bound algorithm may solve this problem, but with prohibitive complexity. Therefore, in this paper, we aim to obtain an efficient solution to solve this problem. To this end, we propose the RLAA algorithm to deal with P effectively and efficiently.

In this section, we show our proposed RLAA algorithm. First, we introduce three important elements in RLAA (i.e., actions, states, and reward functions).

Then, we present RLAA in Algorithm 1. In the beginning, states s is initialized. The Q-table is also initialized, which is used to record every state and action (i.e., line 1 in Algorithm 1). At each episode, we obtain the collection of the actions Ci for the i-th UE. Then, according to the ϵ-greedy policy [13], the i

-th UE either chooses a random action with probability

ϵ or follows the greedy policy with probability 1−ϵ, which is expresses as

where ρ is an action randomly selected from Ci

Next, we update the Q-table (line 11), where the updating rule of Q-table is given as

The above process will be repeated until the maximum episode (epsmax) is reached. Finally, each UE selects an action according to Q-table (line 16). Specifically, for the i-th UE, the action in Ci corresponding to the largest value of Q-table is selected.

In order to evaluate the performance of our proposed RLAA, the following four algorithms are used as comparison algorithms.

Firstly, we compare the performance of RLAA with its four compared algorithms on a set of small scale instances (i.e., the number of UEs ranges from 3 to 7). We assume that there are two UAVs flying in circles with the same radius and the center coordinates of two UAVs are set to [1200,1200,350] and [−1200,−1200,350], respectively. From Fig. 2, one can see that RLAA has the same performance as ES, both of which can achieve the minimal enery consumption. Also, one can see that GO achieves better performance than RO, whereas LE achieve the worst performance for all examined values. This is because that our proposed RLAA can choose most energy-efficient action for all the UEs according to computation and communication requirement, while others either make UE to execute all the task locally (i.e., LE), or randomly offload the tasks (i.e., RO), or just find the nearest UAV (i.e., GO), resulting in worse performance.

In this paper, we studied a multi-UAV enabled MEC system, in which the UAVs are assumed to fly in circles over the ground UEs to provide the computation services. The proposed problem is formulated as a MINLP, which is hard to deal with in general. We propose a RLAA algorithm to address it effectively. Simulation results show that RLAA can achieve the same performance as the exhaustive search in small scale cases, whereas in large case scenario, RLAA still have considerate performance gain over other traditional approaches.