We present a novel approach for the derivation of PDE modeling curvature-driven flows for matrix-valued data. This approach is based on the Riemannian geometry of the manifold of Symmetric Positive Definite Matrices Pos(n). 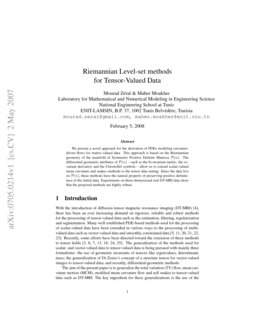 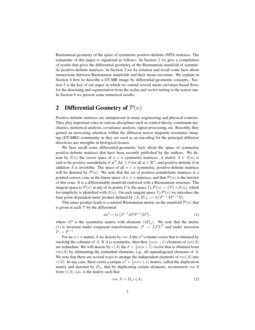 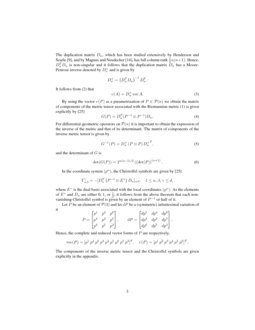 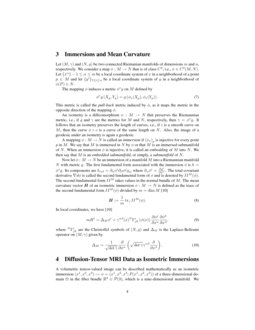 The aim of the present paper is to generalize the total variation (TV) flow, mean curvature motion (MCM), modified mean curvature flow and self snakes to tensor-valued data such as DT-MRI. The key ingredient for these generalizations is the use of the Riemannian geometry of the space of symmetric positive-definite (SPD) matrices. The remainder of this paper is organized as follows. In Section 2 we give a compilation of results that gives the differential geometry of the Riemannian manifold of symmetric positive-definite matrices. In Section 3 we fix notation and recall some facts about immersions between Riemannian manifolds and their mean curvature. We explain in Section 4 how to describe a DT-MR image by differential-geometric concepts. Section 5 is the key of our paper in which we extend several mean curvature-based flows for the denoising and segmentation from the scalar and vector setting to the tensor one. In Section 6 we present some numerical results.

Positive-definite matrices are omnipresent in many engineering and physical contexts. They play important roles in various disciplines such as control theory, continuum mechanics, numerical analysis, covariance analysis, signal processing, etc. Recently, they gained an increasing attention within the diffusion tensor magnetic resonance imaging (DT-MRI) community as they are used as an encoding for the principal diffusion directions ans strengths in biological tissues.

We here recall some differential-geometric facts about the space of symmetric positive-definite matrices that have been recently published by the authors. We denote by S(n) the vector space of n×n symmetric matrices. A matrix A∈S(n) is said to be positive semidefinite if \boldmathx\boldmathxTA\boldmathx≥0 for all \boldmathx\boldmathx∈Rn, and positive definite if in addition A is invertible. The space of all n×n symmetric, positive-definite matrices will be denoted by P(n). We note that the set of positive-semidefinite matrices is a pointed convex cone in the linear space of n×n matrices, and that P(n) is the interior of this cone. It is a differentiable manifold endowed with a Riemannian structure. The tangent space to P(n) at any of its points P is the space TPP(n)={P}×S(n), which for simplicity is identified with S(n). On each tangent space TPP(n) we introduce the base point-dependent inner product defined by ⟨A,B⟩P:=tr(P−1AP−1B).

where dP is the symmetric matrix with elements (dPij). We note that the metric (1) is invariant under congruent transformations: P→LPLT and under inversion P→P−1.

For an n×n matrix A we denote by vecA the n2-column vector that is obtained by stacking the columns of A. If A is symmetric, then then 12n(n−1) elements of vec(A) are redundant. We will denote by υ(A) the d=12n(n+1)-vector that is obtained from vec(A) by eliminating the redundant elements, e.g., all supradiagonal elements of A. We note that there are several ways to arrange the independent elements of vec(A) into υ(A). In any case, there exists a unique n2×12n(n+1) matrix, called the duplication matrix and denoted by Dn, that by duplicating certain elements, reconstructs vecA from υ(A), i.e., is the matrix such that

It follows from (2) that

For differential-geometric operators on P(n) it is important to obtain the expression of the inverse of the metric and that of its determinant. The matrix of components of the inverse metric tensor is given by

and the determinant of G is

In the coordinate system (pα), the Christoffel symbols are given by [25]

where Eγ is the dual basis associated with the local coordinates (pα). As the elements of Eγ and Dn are either 0, 1, or 12, it follows from the above theorem that each non-vanishing Christoffel symbol is given by an element of P−1 or half of it.

Hence, the complete and reduced vector forms of P are respectively,

The components of the inverse metric tensor and the Christoffel symbols are given explicitly in the appendix.

This metric is called the pull-back metric induced by ϕ, as it maps the metric in the opposite direction of the mapping ϕ.

In local coordinates, we have [10]

A volumetric tensor-valued image can be described mathematically as an isometric immersion (x1,x2,x3)↦ϕ=(x1,x2,x3;P(x1,x2,x3)) of a three-dimensional domain Ω in the fiber bundle R3⊗P(3), which is a nine-dimensional manifold. We denote by (M,γ) the image manifold and its metric and by (N,g) the target manifold and its metric. Here M=Ω and N=r3⊗P(3). Consequently, a tensor-valued image is a section of this fiber bundle. The metric ^g of N is given by

The target manifold N, in this context is also called the space-feature manifold [23]. We can rewrite the metric defined by (11) as the quadratic form

where \boldmathp\boldmathp=(pi)=υ(P). The corresponding metric tensor is

where g is the metric tensor of P(3) as defined in Section 2.

Since the image is an isometric immersion, we have γ=ϕ∗^g. Therefore

We note that d=n−m is the codimension of M. In compact form, we have

The total variation norm (TV) method introduced in [19] and its reconstructions have been successfully used in reducing noise and blurs without smearing sharp edges in grey-level, color and other vector-valued images [6, 12, 17, 20, 21, 22]. It is then natural to look for the extension of the TV norm to tensor-valued images.

The TV norm method is obtained as a gradient-decent flow associated with the L1-norm of the tensor field. This yields the following PDE that express the motion by the mean curvature vector H

This flow can be considered as a deformation of the tensor field toward minimal immersion. Indeed, it derives from variational setting that minimize the volume of the embedded image manifold in the space-feature manifold.

where u0(x,y) is the grey level of the image to be processed, u(t,x,y) is its smoothed version that depends on the scale parameter t.

The “philosophy” of this flow is that the term |∇u|div∇u|∇u| represents a degenerate diffusion term which diffuses u in the direction orthogonal to its gradient ∇u and does not diffuse at all in the direction of ∇u.

This formulation has been proposed as a “morphological scale space” [2] and as more numerically tractable method of solving total variation [15].

The natural generalization of this flow to tensor-valued data is

We note that several authors have tried to generalize curvature-driven flows for tensor-valued data in different ways. We think that the the use of differential-geometric tools and concepts yield the correct generalization.

To denoise highly degraded images, Alvarez et al. [1] have proposed a modification of the mean curvature flow equation (15) that reads

where K is a smoothing kernel (a Gaussian for example), K⋆∇ϕ is therefore a local estimate of ∇ϕ for noise elimination, and c(s) is a nonincreasing real function which tends to zero as s→∞. We note that for the numerical experiments we have used c(|∇ϕ|)=k2/(k2+|∇ϕ|2).

The role of c is to reduce the magnitude of smoothing near edges. In the scalar case, this equation does not have the same action as the Perona-Malik equation of enhancing edges. Indeed, Perona-Malik equation has variable diffusivity function and has been shown to selectively produce a “negative diffusion” which can increase the contrast of edges. Equation of he form (17) have always positive or forward diffusion, and the term c merely reduces the magnitude of that smoothing. To correct this situation, Sapiro have proposed the self-snakes formalism [20], which we present in the next subsection and generalize to the matrix-valued data setting.

The method of Sapiro, which he names self-snakes introduces an edge-stopping function into mean curvature flow

Comparing equation (19) to (17), we observe that the term ∇c(K⋆|∇ϕ|)⋅∇ϕ is missing in the old model. This is due to the fact that the Sapiro model takes into account the image structure. Indeed, equation (19) can be re-written as

The term Fdiffusion is as in the anisotropic flow proposed in [1]. The second term in (20), i.e., ∇c⋅∇ϕ, increases the attraction of the deforming contour toward the boundary of “objects” acting as the shock-filter introduced in [18] for deblurring. Therefore, the flow ∇c⋅∇ϕ is a shock filter acting like the backward diffusion in the Perona-Malik equation, which is responsible for the edge-enhancing properties of self snakes. See [20] for detailed discussion on this topic.

We are now interested in generalizing Self-Snakes method for the case of tensor-valued data. We will start the generalization from equation (20) in the following manner

This decomposition is not artificial, since the covariant derivative on follow the same chain rule as the Euclidean directional derivative: let

V a vector field on M which components are vi, and let ρ a scalar function. From the classic differential geometry we have

and in compact form

In Fig. 1 (left), we give a slice of a 3D tensor field defined over a square in R2. We note that a symmetric positive-definite 3×3 matrix P

P and whose axes are proportional to the eigenvalues of P−1. Figure 1 (right) shows this tensor field after the addition of noise. The resultant tensor field P0(x1,x2,x3)

is used as an initial condition for the partial differential equations (

21) which we solve by a finite difference scheme with Neumann boundary conditions. We used 50 time steps of 0.01.s. Figure 2 represents the tensor smoothed by (21).

The Christoffel symbols are arranged in the following six symmetric matrices: