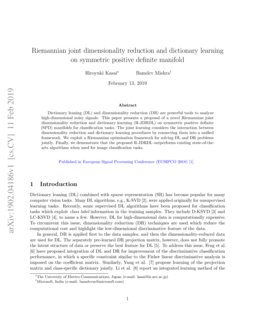 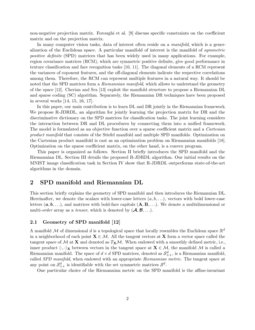 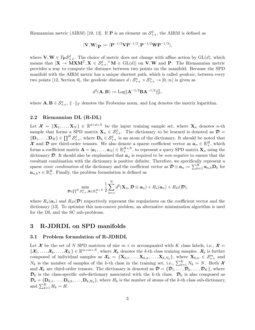 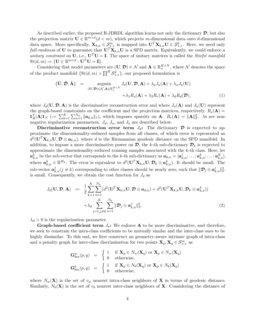 Dimensionality Reduction on SPD Manifolds: The Emergence of Geometry-Aware Methods

In this paper, we aim at learning simultaneously a discriminative dictio...
Homa Foroughi, et al. ∙

It is proven that encoding images and videos through Symmetric Positive ...
Azadeh Alavi, et al. ∙

Beyond Gauss: Image-Set Matching on the Riemannian Manifold of PDFs

, were applied originally for unsupervised learning tasks. Recently, some supervised DL algorithms have been proposed for classification tasks which exploit

class label information in the training samples. They include D-KSVD [3] and LC-KSVD [4]

, to name a few. However, DL for high-dimensional data is computationally expensive. To circumvent this issue, dimensionality reduction (DR) techniques are used which reduce the computational cost and highlight the low-dimensional discriminative feature of the data.

In general, DR is applied first to the data samples, and then the dimensionality-reduced data are used for DL. The separately pre-learned DR projection matrix, however, does not fully promote the latent structure of data or preserve the best feature for DL [5]. To address this issue, Feng et al. [6] have proposed integration of DL and DR for improvement of the discriminative classification performance, in which a specific constraint similar to the Fisher linear discriminative analysis is imposed on the coefficient matrix. Similarly, Yang et al. [7] propose learning of the projection matrix and class-specific dictionary jointly. Li et al. [8] report an integrated learning method of the non-negative projection matrix. Foroughi et al. [9] discuss specific constraints on the coefficient matrix and on the projection matrix.

In many computer vision tasks, data of interest often reside on a manifold, which is a generalization of the Euclidean space. A particular manifold of interest is the manifold of symmetric positive definite

(SPD) matrices that has been widely used in many applications. For example, region covariance matrices (RCM), which are symmetric positive definite, give good performance in texture classification and face recognition tasks

. The diagonal elements of a RCM represent the variances of coponent features, and the off-diagonal elements indicate the respective correlations among them. Therefore, the RCM can represent multiple features in a natural way. It should be noted that the SPD matrices form a

Riemannian manifold, which allows to understand the geometry of the space [12]. Cherian and Sra [13] exploit the manifold structure to propose a Riemannian DL and sparse coding (SC) algorithm. Separately, the Riemannian DR techniques have been proposed in several works [14, 15, 16, 17].

In this paper, our main contribution is to learn DL and DR jointly in the Riemannian framework. We propose R-JDRDL, an algorithm for jointly learning the projection matrix for DR and the discriminative dictionary on the SPD matrices for classification tasks. The joint learning considers the interaction between DR and DL procedures by connecting them into a unified framework. The model is formulated as an objective function over a sparse coefficient matrix and a Cartesian product manifold that consists of the Stiefel manifold and multiple SPD manifolds. Optimization on the Cartesian product manifold is cast as an optimization problem on Riemannian manifolds [18]. Optimization on the sparse coefficient matrix, on the other hand, is a convex program.

This paper is organized as follows. Section II briefly introduces the SPD manifold and the Riemannian DL. Section III details the proposed R-JDRDL algorithm. Our initial results on the MNIST image classification task in Section IV show that R-JDRDL outperforms state-of-the-art algorithms in the domain.

This section briefly explains the geometry of SPD manifold and then introduces the Riemannian DL. Hereinafter, we denote the scalars with lower-case letters (a,b,…)

(\boldmatha,\boldmathb,…), and matrices with bold-face capitals (\bf A,\bf B,…). We denote a multidimensional or multi-order array as a tensor, which is denoted by (\mathbfcalA,\mathbfcalB,…).

A manifold M of dimensional d is a topological space that locally resembles the Euclidean space Rd in a neighborhood of each point \bf X∈M. All the tangent vectors at X form a vector space called the tangent space of M at X and denoted as T\bf XM. When endowed with a smoothly defined metric, i.e., inner product ⟨⋅,⋅⟩\bf X between vectors in the tangent space at \bf X∈M, the manifold M is called a Riemannian manifold. The space of d×d SPD matrices, denoted as Sd++, is a Riemannian manifold, called SPD manifold, when endowed with an appropriate Riemannian metric. The tangent space at any point on Sd++ is identifiable with the set symmetric matrices Sd.

where \bf V,\bf W∈T\bf PSd++. The choice of metric does not change with affine action by GL(d), which means that [\bf X→\bf M\bf X\bf MT,\bf X∈Sd++,∀\bf M∈GL(d)] on \bf V,\bf W and P. The Riemannian metric provides a way to compute the distance between two points on the manifold. Because the SPD manifold with the AIRM metric has a unique shortest path, which is called geodesic, between every two points [12, Section 6], the geodesic distance d:Sn++×Sn++→[0,∞] is given as

where Ra(\boldmathan) and RD(\mathbfcalD) respectively represent the regularizers on the coefficient vector and the dictionary [13]. To optimize this non-convex problem, an alternative minimization algorithm is used for the DL and the SC sub-problems.

As described earlier, the proposed R-JDRDL algorithm learns not only the dictionary \mathbfcalD, but also the projection matrix \bf U∈Rm×d(d<m), which projects m-dimensional data onto d-dimensional data space. More specifically, \bf Xk,n∈Sm++ is mapped into \bf UT\bf Xk,n\bf U∈Sd++. Here, we need only full-rankness of U to guarantee that \bf UT\bf Xk,n\bf U is a SPD matrix. Equivalently, we could enforce a unitary constraint on U, i.e., \bf UT\bf U=\bf I. The space of unitary matrices is called the Stiefel manifold St(d,m)\coloneqq{\bf U∈Rm×d:\bf UT% \bf U=\bf I}.

Considering that model parameters are (\bf U,\mathbfcalD)∈N and \bf A∈RH×N+, where N denotes the space of the product manifold {St(d,m)×∏HSd++}, our proposed formulation is

Discriminative reconstruction error term Jd: The dictionary \mathbfcalD is expected to approximate the dimensionality-reduced samples from all classes, of which error is represented as d2(\bf UT\bf Xk,n\bf U,\mathbfcalD⊗%\boldmath$a$k,n), where d is the Riemannian geodesic distance on the SPD manifold. In addition, to impose a more discriminative power on \mathbfcalD, the k-th sub-dictionary \mathbfcalDk is expected to approximate the dimensionality-reduced training samples associated with the k-th class. Here, let \boldmathakk,n be the sub-vector that corresponds to the k-th sub-dictionary as \boldmathak,n=[\boldmatha1k,n;…;% \boldmathakk,n;…;\boldmathaKk,n], where \boldmathakk,n∈RHk. The error is equivalent to d2(\bf UT\bf Xk,n\bf U,\mathbfcalDk⊗\boldmathakk,n). It should be small. The sub-vector \boldmathajk,n(j≠k) corresponding to other classes should be nearly zero, such that ∥\mathbfcalDj⊗\boldmathajk,n∥2F is small. Consequently, we obtain the cost function for Jd as

λd>0 is the regularization parameter.

Graph-based coefficient term Ja: We enforce A to be more discriminative, and therefore, we seek to constrain the intra-class coefficients to be mutually similar and the inter-class ones to be highly dissimilar. To this end, we first construct an geometry-aware intrinsic graph of intra-class and a penalty graph for inter-class discrimination for two points \bf Xp,\bf Xq∈Sm++ as

where Nw(\bf X) is the set of vw nearest intra-class neighbors of X in terms of geodesic distance. Similarly, Nb(\bf X) is the set of vb nearest inter-class neighbors of X. Considering the distance of pairs of coding coefficient vectors \boldmathap and \boldmathaq as an indicator of discrimination capability, the final graph-based coefficient term Ja(\bf A) is defined as

Graph-based projection term Ju: We also learn a projection matrix \bf U∈St(d,m) that can preserve class information and which can map the training samples to a low-dimensional discriminative space. Consequently, Ju(\bf U) is defined as

where the affinity matrix

The objective function of (1) is divided into two sub-problems, which are solved in alternating fashion. We discuss both the sub-problems below.

DL sub-problem on the product manifold: We consider the DL sub-problem of (1) by optimizing the projection matrix U and the tensor-formed dictionary \mathbfcalD, keeping A fixed to ^\bf A=(^\boldmathak,n). Consequently, the problem is can be re-formulated as

SC sub-problem: We consider the SC sub-problem of (1) for solving A, keeping U and \mathbfcalD fixed to ^\bf U and ^\mathbfcalD, respectively. The problem, therefore, can be re-formulated as

where \boldmathak,n is denoted as \boldmathap for simplicity. Here, we calculate each column of A, i.e., \boldmathak,n sequentially by fixing the other coefficients.

It should be emphasized that the above problem is a convex problem and is solved with a gradient projection algorithm. Specifically, we use the spectral projected gradient (SPG) solver [Birgin_ACMTMS_2001, 13].

Classification scheme: We apply the learned projection matrix U and the dictionary \mathbfcalD on the query test sample \bf Xtest

to estimate its class label. For this purpose, the test sample is first projected into the low-dimensional space by

U. Subsequently, it is coded over \mathbfcalD by solving the following equation:

In this section, we show the effectiveness of the proposed R-JDRDL algorithm against state-of-the-art classification algorithms on SPD matrices.

dS:Sn++×Sn++→[0,∞] is a symmetric type of Bregman divergence and is defined as d2S(\bf A,\bf B):=lndet((\bf A+\bf B)/2)+0.5lndet(\bf AB), where A and \bf B∈Sd++ [23]. DR-NN-AIRM is the AIRM-based NN classifier with the dimensionality-reduced training samples, which are obtained by R-DR [14]. DR-NN-AIRM is the same algorithm, but the distance metric is the Stein metric. R-SRC-AIRM and R-SRC-Stein are the sparse representation classifiers (SRCs) based on the AIRM and Stein metrics, respectively. R-KSRC stands for kernel-based SRC with the Stein metric. R-DL is the DL with the SRC classifier [13]. R-DR-DL-AIRM and R-DR-DL-Stein are the DL with the SRC classifier after the R-DR algorithm.

We implement our proposed algorithm in Matlab. The DL sub-problem on the product manifold makes use of the Matlab toolbox Manopt [24]. The Matlab codes R-DL, R-DR, and R-KSRC are downloaded from the respective authors’ homepages.

The results of the classification accuracy are presented in Table 1. The table presents superior performances of the proposed R-JDRDL against state-of-the-art algorithms. It should be noted that R-DR-DL (both with Stein and AIRM metrics) give poor performance, implying that the separately pre-learned DR projection matrix might not be optimal for the subsequent DL.

We have presented a Riemannian joint framework, R-JDRDL, of performing dimensionality reduction along with discriminative dictionary learning on the set of SPD matrices for classification tasks. We formulate the joint learning as an objective function with the reconstruction error term and with the constraints on the projection matrix, the dictionary, and the sparse coefficient codes. Our numerical experiments demonstrate the good performance of jointly performing DL and DR. In particular, R-JDRDL outperforms existing state-of-the-arts algorithms for the MNIST image classification task.

Extending the framework to learning with other metrics on the SPD manifold (e.g., the Stein metric or the log-Euclidean metric) will be a topic of future research, as well as having a competitive numerical implementation with extensive evaluations on other real-world datasets.