Recently, successful approaches have been made to exploit good-for-MDPs automata (Büchi automata with a restricted form of nondeterminism) for model free reinforcement learning, a class of automata that subsumes good for games automata and the most widespread class of limit deterministic automata. The foundation of using these Büchi automata is that the Büchi condition can, for good-for-MDP automata, be translated to reachability. The drawback of this translation is that the rewards are, on average, reaped very late, which requires long episodes during the learning process. We devise a new reward shaping approach that overcomes this issue. We show that the resulting model is equivalent to a discounted payoff objective with a biased discount that simplifies and improves on prior work in this direction. 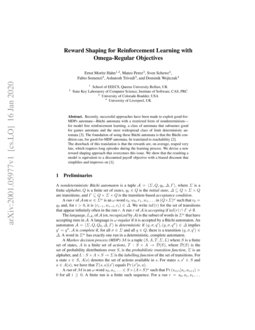 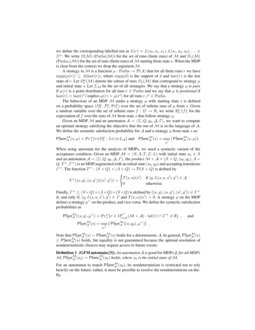 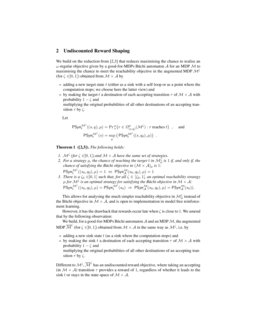 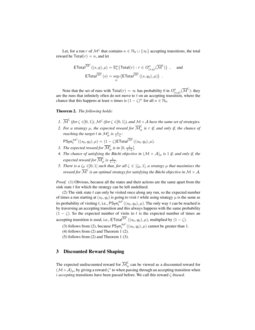 A nondeterministic Büchi automaton is a tuple A=⟨Σ,Q,q0,Δ,Γ⟩, where Σ is a finite alphabet, Q is a finite set of states, q0∈Q is the initial state, Δ⊆Q×Σ×Q are transitions, and Γ⊆Q×Σ×Q is the transition-based acceptance condition.

The language, LA, of A (or, recognized by A) is the subset of words in Σω that have accepting runs in A. A language is ω-regular if it is accepted by a Büchi automaton. An automaton A=⟨Σ,Q,Q0,Δ,Γ⟩ is deterministic if (q,σ,q′),(q,σ,q′′)∈Δ implies q′=q′′. A is complete if, for all σ∈Σ and all q∈Q, there is a transition (q,σ,q′)∈Δ. A word in Σω has exactly one run in a deterministic, complete automaton.

is the set of probability distributions over

S, is the probabilistic transition function, Σ is an alphabet, and L:S×A×S→Σ is the labelling function of the set of transitions. For a state s∈S, A(s) denotes the set of actions available in s. For states s,s′∈S and a∈A(s), we have that T(s,a)(s′) equals Pr(s′|s,a).

A strategy in M is a function μ:Paths→D(A) that for all finite runs r we have supp(μ(r))⊆A(last(r)), where supp(d) is the support of d and last(r) is the last state of r. Let Ωμs(M) denote the subset of runs Ωs(M) that correspond to strategy μ and initial state s. Let ΣM be the set of all strategies. We say that a strategy μ is pure if μ(r) is a point distribution for all runs r∈Paths and we say that μ is positional if last(r)=last(r′) implies μ(r)=μ(r′) for all runs r,r′∈Paths.

The behaviour of an MDP M under a strategy μ with starting state s is defined on a probability space (Ωμs,Fμs,Prμs) over the set of infinite runs of μ from s

. Given a random variable over the set of infinite runs

f:Ω→R, we write Eμs{f} for the expectation of f over the runs of M from state s that follow strategy μ.

Given an MDP M and an automaton A=⟨Σ,Q,q0,Δ,Γ⟩, we want to compute an optimal strategy satisfying the objective that the run of M is in the language of A. We define the semantic satisfaction probability for A and a strategy μ from state s as:

When using automata for the analysis of MDPs, we need a syntactic variant of the acceptance condition. Given an MDP M=(S,A,T,Σ,L) with initial state s0∈S and an automaton A=⟨Σ,Q,q0,Δ,Γ⟩, the product M×A=(S×Q,(s0,q0),A×Q,T×,Γ×) is an MDP augmented with an initial state (s0,q0) and accepting transitions Γ×. The function T×:(S×Q)×(A×Q)\xrightharpoondownD(S×Q) is defined by

An automaton A is good for MDPs if, for all MDPs M, PSynMA(s0)=PSemMA(s0) holds, where s0 is the initial state of M.

For an automaton to match PSemMA(s0), its nondeterminism is restricted not to rely heavily on the future; rather, it must be possible to resolve the nondeterminism on-the-fly.

This allows for analysing the much simpler reachability objective in Mζμ instead of the Büchi objective in M×A, and is open to implementation in model free reinforcement learning.

However, it has the drawback that rewards occur late when ζ is close to 1. We amend that by the following observation:

Different to Mζ, ¯¯¯¯¯¯¯Mζ has an undiscounted reward objective, where taking an accepting (in M×A) transition τ provides a reward of 1, regardless of whether it leads to the sink t or stays in the state-space of M×A.

Let, for a run r of Mζ that contains n∈N0∪{∞} accepting transitions, the total reward be Total(r)=n, and let

Note that the set of runs with Total(r)=∞ has probability 0 in Ωμ(s,q)(¯¯¯¯¯¯¯Mζ): they are the runs that infinitely often do not move to t on an accepting transition, where the chance that this happens at least n times is (1−ζ)n for all n∈N0.

(1) Obvious, because all the states and their actions are the same apart from the sink state t for which the strategy can be left undefined.

Let, for a run r of M×A that contains n∈N0∪{∞} accepting transitions, the ζ-biased discounted reward be Disctζ(r)=∑n−1i=0ζi, and let

This is simply because the discounted reward for each transition is equal to the chance of not having reached t before (and thus still seeing this transition) in ¯¯¯¯¯¯¯Mζμ.

This improves over [1] because it only uses one discount parameter, ζ, instead of two (called γ and γB in [1]) parameters (that are not independent). It is also simpler and more intuitive: discount whenever you have earned a reward.