Few-shot learning with N-way K-shot scheme is an open challenge in machine learning. Many approaches have been proposed to tackle this problem, e.g., the Matching Networks and CLIP-Adapter. Despite that these approaches have shown significant progress, the mechanism of why these methods succeed has not been well explored. In this paper, we interpret these few-shot learning methods via causal mechanism. We show that the existing approaches can be viewed as specific forms of front-door adjustment, which is to remove the effects of confounders. Based on this, we introduce a general causal method for few-shot learning, which considers not only the relationship between examples but also the diversity of representations. Experimental results demonstrate the superiority of our proposed method in few-shot classification on various benchmark datasets. Code is available in the supplementary material. 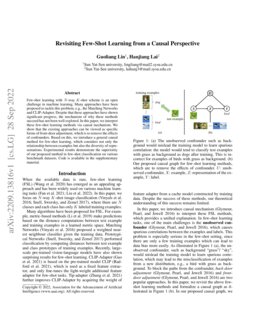 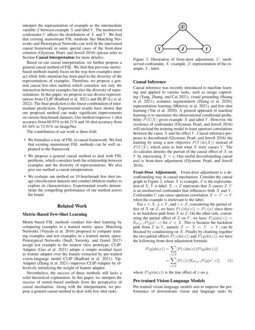 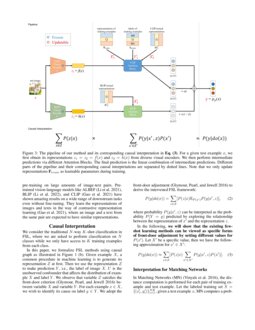 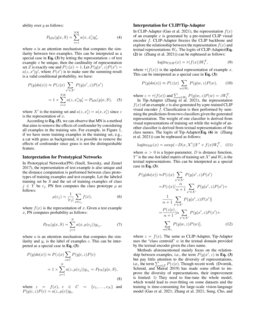 The field of few-shot learning has made remarkable strides in developing...
Henry Kvinge, et al. ∙

When the available data is rare, few-shot learning (FSL) Wang et al. (2020) has emerged as an appealing approach and has been widely used on various machine learning tasks Fan et al. (2021); Liu et al. (2022). In this paper, we focus on N-way K-shot image classification Vinyals et al. (2016); Snell et al. (2017), where there are N classes and each class has only K labeled training examples.

Many algorithms have been proposed for FSL. For example, metric-based methods Li et al. (2019) make predictions based on the distance computations between test example and training examples in a learned metric space. Matching Networks Vinyals et al. (2016)

Gao et al. (2021) is based on the pre-trained model CLIP Radford et al. (2021), which is used as a fixed feature extractor, and only fine-tunes the light-weight additional feature adapter for few-shot tasks. Tip-adapter Zhang et al. (2021) further improves CLIP-Adapter by acquiring the weight of feature adapter from a cache model constructed by training data. Despite the success of these methods, our theoretical understanding of this success remains limited.

In this paper, we introduce causal mechanism Glymour et al. (2016) to interpret these FSL methods, which provides a unified explanation. In few-shot learning tasks, one of the main challenges is the unobserved confounder Glymour et al. (2016), which causes spurious correlations between the examples and labels. This problem is especially serious in the few-shot setting, since there are only a few training examples which can lead to data bias more easily. As illustrated in Figure 1 (a), the unobserved confounder, such as background “grass”/ “sky”, would mislead the training model to learn spurious correlation, which may lead to the misclassification of examples from a new distribution, e.g., a bird with grass as background. To block the paths from the confounder, back-door adjustment Glymour et al. (2016) and front-door adjustment Glymour et al. (2016) are two popular approaches. In this paper, we revisit the above few-shot learning methods and formalize a causal graph as illustrated in Figure 1 (b). In our proposed causal graph, we interpret the representation of example as the intermediate variable Z between example X and label Y. The unobserved confounder U affects the distribution of X and Y. We find that existing mainstream FSL methods like Matching Networks and Prototypical Networks can well fit the intervened causal framework in some special cases of the front-door criterion Glymour et al. (2016) (please refer to Section Causal Interpretation for more details).

Based on our causal interpretation, we further propose a general causal method of FSL. We find that previous metric-based methods mainly focus on the way how examples interact while little attention has been paid to the diversity of the representations of examples. Therefore, we propose a general causal few-shot method which considers not only the interaction between examples but also the diversity of representations. In this paper, we propose to use diverse representations from CLIP Radford et al. (2021) and BLIP Li et al. (2022)

. The final prediction is the linear combination of intermediate predictions. Experimental results have shown that our proposed method can make significant improvements on various benchmark datasets. Our method improves 1-shot accuracy from 60.93% to 64.21% and 16-shot accuracy from 65.34% to 72.91% on ImageNet.

The contribution of our work is three-fold:

Nevertheless, the success of these methods still lacks a solid theoretical explanation. In this paper, we interpret the success of metric-based methods from the perspective of causal mechanism. Along with the interpretation, we propose a general causal method to deal with few-shot tasks.

Causal inference was recently introduced to machine learning and applied to various tasks, such as image captioning

. A general approach in machine learning is to maximize the observational conditional probability

Front-door adjustment is a deconfounding way in causal mechanism. Consider the causal graph in Figure 2, where X is example, Z is the representation of X, Y is label. X→Z represents that X causes Z. U is an unobserved confounder that influences both X and Y. Confounder U can cause spurious correlation X←U→Y when the example is irrelevant to the label.

We consider the traditional N-way K-shot classification in FSL, where we are asked to perform classification on N classes while we only have access to K training examples from each class.

In this paper, we formalize FSL methods using causal graph as illustrated in Figure 1 (b). Given example X, a common procedure in machine learning is to generate its representation Z at first. Then we use the representation Z to make prediction Y, i.e., the label of image X. U is the unobserved confounder that affects the distribution of example X and label Y. We observe that variable Z satisfies the front-door criterion Glymour et al. (2016) between variable X and variable Y. For each example x∈X, we wish to identify its cause on label y∈Y. We adopt the front-door adjustment Glymour et al. (2016) to derive the intervened FSL framework:

In the following, we will show that the existing few-shot learning methods can be viewed as specific forms of front-door adjustment by setting different values for P(x′). Let X′ be a specific value, then we have the following approximation for x′∈X′:

In Matching Networks (MN) Vinyals et al. (2016), the distance computation is performed for each pair of training example and test example. Let the labeled training set S={(x′i,y′i)}NKi=1, given a test example x, MN computes a probability over y as follows:

where a is an attention mechanism that computes the similarity between two examples. This can be interpreted as a special case in Eq. (3) by letting the representation z of test example x be unique, then the cardinality of representation set Z is exactly one and P(z|x)=1. Let P(y|x′,z)P(x′)=a(z,x′)y′, where P(x′) is to make sure the summing result is a valid conditional probability, we have:

where X′ is the training set and a(z,x′i)=a(x,x′i) since z is the representation of x.

According to Eq. (5), we can observe that MN is a method that aims to remove the effects of confounder by considering all examples in the training sets. For example, in Figure 1, if we have more training examples in the training set, e.g., a cat with grass as background, it is possible to remove the effects of confounder since grass is not the distinguishable feature.

where f(x) is the representation of x. Given a test example x, PN computes probability as follows:

where a is an attention mechanism that computes the similarity and yc is the label of examples c. This can be interpreted as a special case in Eq. (3):

where τ(f(x)) is the updated representation of example x. This can be interpreted as a special case in Eq. (3):

where α>0 is a hyper-parameter, D is distance function, Y′ is the one-hot label matrix of training set X′ and Wt is the textual representations. This can be interpreted as a special case in Eq. (3):

where z=f(x). The same as CLIP-Adapter, Tip-Adapter uses the “class centroid” w in the textual domain provided by the textual encoder given the class name.

We get the one-hot labels of training examples Itrain, which are denoted as Ltrain∈{0,1}NK×N.

We now treat representation f(x) as query, representations Ftrain as keys, and one-hot labels Ltrain as values. The intermediate prediction p1(x)∈R1×N is performed by the Attention Layer formulated as follows:

Thanks to that query and keys are L2-normalized, the term (1−f(x)FTtrain) is equivalent to computing the Euclidean distances between the representation f(x) and the representations Ftrain. The exponential function serves as a non-negative transformation for computed distances.

On the other side, we get the L2-normalized D-dimension textual representations Wt∈RN×D for N class names by CLIP textual encoder. The intermediate prediction p2(x)∈R1×N is calculated as follows:

The generation of predictions p1(x) and p2(x) is illustrated in Figure 4. The term p1(x) serves as new knowledge from few-shot tasks while the term p2(x) preserves the prior knowledge from CLIP model.

We then get the L2-normalized D-dimension textual representations Wt∗∈RN×D for N class names by BLIP textual encoder. The intermediate prediction p3(x)∈R1×N is calculated as follows:

The final prediction py(x)∈R1×N is the linear combination of intermediate predictions mentioned above:

. Besides, the one-hot labels serving as ground-truth annotations should be kept frozen for anti-forgetting. Owing to the good initialization of Attention Layer, our method can adapt to new tasks after a few epochs of updates on training set.

As indicated by Eq. (3), our method considers not only the relationship between examples but also the diversity of representations. We can rephrase our method as follows:

Table 1 shows the performance of our method on 10 benchmark image classification datasets. The CLIP visual backbone is ResNet-50 and the BLIP visual backbone is ViT-Large with 16×16 patch size for all methods. As Table 1 shows, our method can greatly improve classification accuracies on various datasets, which are increased by at least 2.43% on ImageNet, Caltech 101, DTD, EuroSAT, Flowers102, Food101, OxfordIIIPet, StanfordCars, and SUN397. Accuracy of our method is marginally lower than that of Tip-Adapter-F on FGVCAircraft by 1.62%. We attribute the degraded performance on FGVCAircraft to the lack of generalization of BLIP on FGVCAircraft since Zero-shot BLIP only achieves 5.52% accuracy on FGVCAircraft.

As Figure 5 shows, our method can achieve significant improvement on ImageNet with various shots. Ours surpasses all previous methods in all few-shot settings on ImageNet, which demonstrates the superiority of using diverse representations.

In this set of experiments, we conduct ablation studies on ImageNet to analyze the characteristics of our method. All experiments are tested with 16 shots.

In this paper, we interpreted existing mainstream few-shot learning methods from the perspective of causal mechanism. We interpreted these methods using causal graph. Based on the proposed causal graph, we deconfound the training by intervening the example via front-door adjustment. We observed that the intervened causal framework can well explain existing mainstream few-shot learning methods. Motivated by the intervened causal framework, we proposed a general causal method to tackle few-shot tasks considering not only the relationship between examples but also the diversity of representations. Conducted experimental results have demonstrated the superiority of our proposed method. In our future work, we aim to give a better theoretical explanation for more few-shot learning methods.