The CFR+ algorithm for solving imperfect information games is a variant of the popular CFR algorithm, with faster empirical performance on a range of problems. It was introduced with a theoretical upper bound on solution error, but subsequent work showed an error in one step of the proof. We provide updated proofs to recover the original bound. 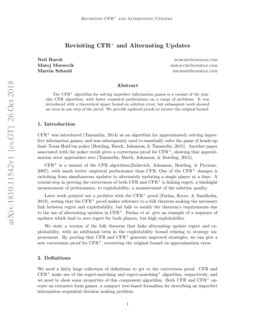 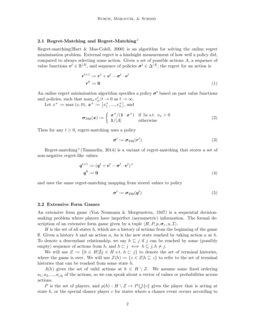 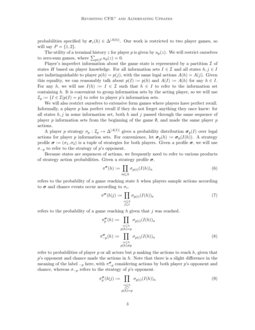 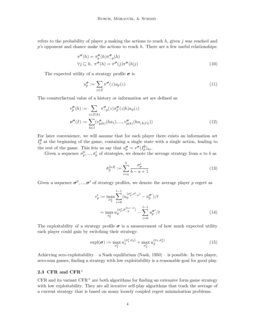 In this paper we examined an algorithm for the All-k-Nearest-Neighbor pr...
Hengzhao Ma, et al. ∙

On the ESL algorithm for solving energy games

We propose a variant of an algorithm introduced by Schewe and also studi...
Antonio Casares, et al. ∙

A Hennessy-Milner Theorem for ATL with Imperfect Information

We show that a history-based variant of alternating bisimulation with im...
Francesco Belardinelli, et al. ∙

In this paper we examined an algorithm for the All-k-Nearest-Neighbor pr...
Hengzhao Ma, et al. ∙

CFR+ is a variant of the CFR algorithm[Zinkevich, Johanson, Bowling,  PiccioneZinkevich et al.2007], with much better empirical performance than CFR. One of the CFR+ changes is switching from simultaneous updates to alternately updating a single player at a time. A crucial step in proving the correctness of both CFR and CFR+ is linking regret, a hindsight measurement of performance, to exploitability, a measurement of the solution quality.

Later work pointed out a problem with the CFR+ proof [Farina, Kroer,  SandholmFarina et al.2018], noting that the CFR+ proof makes reference to a folk theorem making the necessary link between regret and exploitability, but fails to satisfy the theorem’s requirements due to the use of alternating updates in CFR+. Farina et al. give an example of a sequence of updates which lead to zero regret for both players, but high exploitability.

We state a version of the folk theorem that links alternating update regret and exploitability, with an additional term in the exploitability bound relating to strategy improvement. By proving that CFR and CFR+ generate improved strategies, we can give a new correctness proof for CFR+, recovering the original bound on approximation error.

We need a fairly large collection of definitions to get to the correctness proof. CFR and CFR+ make use of the regret-matching and regret-matching+ algorithm, respectively, and we need to show some properties of this component algorithm. Both CFR and CFR+ operate on extensive form games, a compact tree-based formalism for describing an imperfect information sequential decision making problem.

Regret-matching[Hart  Mas-ColellHart  Mas-Colell2000] is an algorithm for solving the online regret minimisation problem. External regret is a hindsight measurement of how well a policy did, compared to always selecting some action. Given a set of possible actions A, a sequence of value functions vt∈R|A|, and sequence of policies σt∈Δ|A|, the regret for an action is

An online regret minimisation algorithm specifies a policy σt based on past value functions and policies, such that maxarta/t→0 as t→∞.

H is the set of all states h, which are a history of actions from the beginning of the game ∅. Given a history h and an action a, ha is the new state reached by taking action a at h. To denote a descendant relationship, we say h⊑j if j can be reached by some (possibly empty) sequence of actions from h, and h⊏j⟺h⊑j,h≠j.

of the actions, so we can speak about a vector of values or probabilities across actions.

P is the set of players, and p(h):H∖Z↦P⋃{c} gives the player that is acting at state h, or the special chance player c for states where a chance event occurs according to probabilities specified by σc(h)∈Δ|A(h)|. Our work is restricted to two player games, so will say P={1,2}.

The utility of a terminal history z for player p is given by up(z). We will restrict ourselves to zero-sum games, where ∑p∈Pup(z)=0.

We will also restrict ourselves to extensive form games where players have perfect recall. Informally, a player p has perfect recall if they do not forget anything they once knew: for all states h,j in some information set, both h and j passed through the same sequence of player p information sets from the beginning of the game ∅, and made the same player p actions.

σp(I) over legal actions for player p information sets. For convenience, let σp(h)\vcentcolon=σp(I(h)). A strategy profile σ\vcentcolon=(σ1,σ2) is a tuple of strategies for both players. Given a profile σ, we will use σ−p to refer to the strategy of p’s opponent.

Because states are sequences of actions, we frequently need to refer to various products of strategy action probabilities. Given a strategy profile σ,

refers to the probability of a game reaching state h when players sample actions according to σ and chance events occur according to σc.

refers to the probability of a game reaching h given that j was reached.

The expected utility of a strategy profile σ is

For later convenience, we will assume that for each player there exists an information set I∅p at the beginning of the game, containing a single state with a single action, leading to the rest of the game. This lets us say that uσp=vσ(I∅p)a0.

Given a sequence σ0p,...,σtp of strategies, we denote the average strategy from a to b as

Given a sequence σ0,...,σt of strategy profiles, we denote the average player p regret as

The exploitability of a strategy profile σ is a measurement of how much expected utility each player could gain by switching their strategy:

CFR and its variant CFR+ are both algorithms for finding an extensive form game strategy with low exploitability. They are all iterative self-play algorithms that track the average of a current strategy that is based on many loosely coupled regret minimisation problems.

Let p be the player that is about to be updated in CFR or CFR+ at some time t. Let σtp be the current strategy for p, and σo be the opponent strategy σt−p or σt+1−p used by the values defined in Equation 16. Then u(σt+1p,σo)p≥u(σtp,σo)p.

As an immediate corollary of Theorems 1 and 3, when using alternating updates with either CFR or CFR+, the average strategy (¯σ[1,t]1,¯σ[0,t−1]2) has O(√t) exploitability. From the original papers, both algorithms have an O(√t) regret bound, and the trailing sum in Theorem 1 is non-negative by Theorem 3. However, this only applies to a uniform average, so we need yet another theorem to bound the exploitability of the CFR+ weighted average.

Let σt be the CFR+ strategy profile at some time t, using alternating updates so that player 1 regret-like values are updated using v(σt1,σt2) and player 2 regrets are updated using v(σt+11,σt2). Let l=maxy,z∈Z(u1(y)−u2(z)) be the bound on terminal utilities. Then the exploitability of the weighted average strategy (2t2+t∑ti=1iσi1,2t2+t∑t−1i=0(i+1)σi2) is bounded by 2|I|l√k/t, where k\vcentcolon=maxI|A(I)|.

The original CFR+ convergence proof makes unsupported use of the folk theorem linking regret to exploitability. We re-make the link between regret and exploitability for alternating updates, and provide a corrected CFR+ convergence proof that recovers the original exploitability bound. The proof uses a specific property of CFR and CFR+, where for any single player update, both algorithms are guaranteed to never generate a new strategy which is worse than the current strategy.

With a corrected proof, we once again have a theoretical guarantee of correctness to fall back on, and can safely use CFR+ with alternating updates, in search of its strong empirical performance without worrying that it might be worse than CFR.

The alternating update analogue of the folk theorem also provides some theoretical motivation for the empirically observed benefit of using alternating updates. Exploitability is now bounded by the regret minus the average improvement in expected values. While we proved that the improvement is guaranteed to be non-negative for CFR and CFR+, we would generally expect non-zero improvement on average, with a corresponding reduction in the bound on exploitability.

We show that when using regret-matching or regret-matching+, once there is at least one positive stored regret or regret-like value, there will always be a positive stored value. As a consequence, the policy will not switch back to the default of uniform random, which lets us show that with respect to the current values, both algorithms move to a new policy which is no worse than the current policy.

Proof. Given sta>0 we have

Proof. There are two cases.

See 2 Proof. By Lemma 5 we do not need to consider the case where ∃a sta>0 and ∀a st+1≤0. This leaves three cases.

a.2 CFR and CFR+ Properties

We start by showing that after a player updates their strategy using CFR or CFR+, the player’s counterfactual value does not decrease for any action at any of their information sets. This implies that with the opponent strategy fixed, the expected value of the player’s new strategy does not decrease. Given this non-decreasing value and the original CFR+ regret bounds, we show a bound on exploitability.

Proof. We will use some additional terminology. Let the terminal states reached from I by action a∈A(I) be

and for any descendant state of I, we will call the ancestor h in I

Let C(I,a) be the set of information sets which are immediate children of I given action a∈A(I):

Using this new terminology, we can re-write

We will now show that ∀i≥0

For the base case i=0, consider any I∈Ip such that d(I)=0. Given these assumptions,

Assume the inductive hypothesis, Equation 29, holds for some i≥0. If ∀I∈Ip, d(I)≤i, Equation 29 trivially holds for i+1. Otherwise, consider any I∈Ip such that d(I)=i+1. For notational convenience, call the (possibly empty) set of terminal histories in Z(I,a) that do not pass through another player p(I) information set

If we partition Z(I,a) based on J∈C(I,a), we end up with sets of terminals passing through different J, and possibly some additional terminals T(I,a). Note that by the induction assumption, because d(I)=i+1