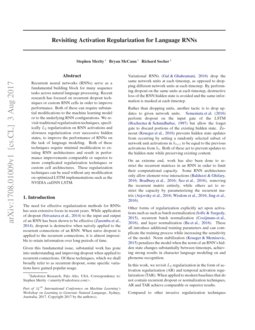 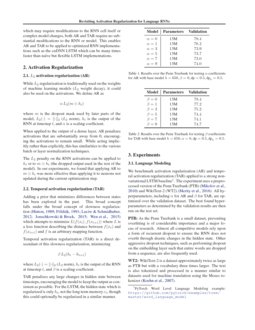 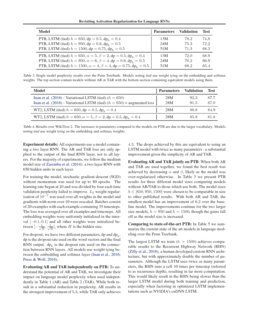 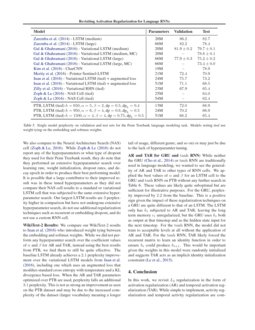 In this work we present a modification in the conventional flow of infor...
Leandro Palma, et al. ∙

The vanilla LSTM has become one of the most potential architectures in w...
Rui Li, et al. ∙

Finding the Answers with Definition Models

The need for effective regularization methods for RNNs has seen extensive focus in recent years. While application of dropout (Srivastava et al., 2014) to the input and output of an RNN has been shown to be effective (Zaremba et al., 2014), dropout is destructive when naively applied to the recurrent connections of an RNN. When naive dropout is applied to the recurrent connections, it is almost impossible to retain information over long periods of time.

Given this fundamental issue, substantial work has gone into understanding and improving dropout when applied to recurrent connections. Of these techniques, which we shall broadly refer to as recurrent dropout, some specific variations have gained popular usage.

Rather than dropping units, another tactic is to drop updates to given network units. Semeniuta et al. (2016) perform dropout on the input gate of the LSTM (Hochreiter & Schmidhuber, 1997) but allow the forget gate to discard portions of the existing hidden state. Zoneout (Krueger et al., 2016) prevents hidden state updates from occurring by setting a randomly selected subset of network unit activations in ht+1 to be equal to the previous activations from ht. Both of these act to prevent updates to the hidden state while preserving existing content.

(Ioffe & Szegedy, 2015), recurrent batch normalization (Cooijmans et al., 2016), and layer normalization (Ba et al., 2016). These all introduce additional training parameters and can complicate the training process while increasing the sensitivity of the model. Norm stabilization (Krueger & Memisevic, 2015) penalizes the model when the norm of an RNN’s hidden state changes substantially between timesteps, achieving strong results in character language modeling on and phoneme recognition.

Compared to other invasive regularization techniques which may require modifications to the RNN cell itself or complex model changes, both AR and TAR require no substantial modifications to the RNN or model. This enables AR and TAR to be applied to optimized RNN implementations such as the cuDNN LSTM which can be many times faster than naïve but flexible LSTM implementations.

While L2 regularization is traditionally used on the weights of machine learning models (L2 weight decay), it could also be used on the activations. We define AR as

where m is the dropout mask used by later parts of the model, L2(⋅)=∥⋅∥2 (L2 norm), ht is the output of the RNN at timestep t, and α is a scaling coefficient.

When applied to the output of a dense layer, AR penalizes activations that are substantially away from 0, encouraging the activations to remain small. While acting implicitly rather than explicitly, this has similarities to the various batch or layer normalization techniques.

The L2 penalty on the RNN activations can be applied to ht or to m⊙ht (the dropped output used in the rest of the model). In our experiments, we found that applying AR to m⊙ht

was more effective than applying it to neurons not updated during the current optimization step.

Adding a prior that minimizes differences between states has been explored in the past. This broad concept falls under the broad concept of slowness regularization (Hinton, 1989; Földiák, 1991; Luciw & Schmidhuber, 2012; Jonschkowski & Brock, 2015; Wen et al., 2015) which attempts to minimize L(f(xt),f(xt+1)) where L

is a loss function describing the distance between

f(xt) and f(xt+1) and f is an arbitrary mapping function.

TAR penalizes any large changes in hidden state between timesteps, encouraging the model to keep the output as consistent as possible. For the LSTM, the hidden state which is regularized is only ht, not the long term memory ct, though this could optionally be regularized in a similar manner.

α for AR and β for TAR, are optimized over the validation dataset. The best found hyperparameters as determined by the validation results are then run on the test set.

PTB: As the Penn Treebank is a small dataset, preventing overfitting is of considerable importance and a major focus of research. Almost all competitive models rely upon a form of recurrent dropout to ensure the RNN does not overfit through drastic changes in the hidden state. Other aggressive dropout techniques, such as performing dropout on the embedding layer such that entire words are dropped from a sequence, are also frequently used.

WT2: WikiText-2 is a dataset approximately twice as large as PTB but with a vocabulary three times larger. The text is also tokenized and processed in a manner similar to datasets used for machine translation using the Moses tokenizer (Koehn et al., 2007).

Experiment details: All experiments use a model containing a two layer RNN. The AR and TAR loss are only applied to the output of the final RNN layer, not to all layers. For the majority of experiments, we follow the medium model size of Zaremba et al. (2014): a two layer RNN with 650 hidden units in each layer.

For training the model, stochastic gradient descent (SGD) without momentum was used for up to 80 epochs. The learning rate began at

20 and was divided by four each time validation perplexity failed to improve. L2 weight regularization of 10−7 was used over all weights in the model and gradients with norm over 10 were rescaled. Batches consist of 20 examples with each example containing 35 timesteps. The loss was averaged over all examples and timesteps. All embedding weights were uniformly initialized in the interval [−0.1,0.1] and all other weights were initialized between [−1√H,1√H], where H is the hidden size.

For dropout, we have two different parameters, dp and dph. dp

is the dropout rate used on the word vectors and the final RNN output.

is the dropout rate used on the connection between RNN layers. All models use weight tying between the embedding and softmax layer

Evaluating AR and TAR independently on PTB: To understand the potential of AR and TAR, we investigate their impact on language model perplexity when used independently in Table 1 (AR) and Table 2 (TAR). While both result in a substantial reduction in perplexity, AR results in the strongest improvement of 5.3, while TAR only achieves 4.3. The drops achieved by this are equivalent to using an LSTM model with twice as many parameters - a substantial improvement given the simplicity of AR and TAR.

Evaluating AR and TAR jointly on PTB: When both AR and TAR are used together, we found the best result was achieved by decreasing α and β, likely as the model was over-regularized otherwise. In Table 3 we present PTB results for three different model sizes comparing models without AR/TAR to those which use both. The model sizes h∈[650,950,1500] were chosen to be comparable in size to other published results. With both AR and TAR, the smallest model has an improvement of 6.2 over the baseline model. The improvements continue for the two larger size models, h=950 and h=1500, though the gains fall off as the model size is increased.

Comparing to state-of-the-art PTB: In Table 5 we summarize the current state of the art models in language modeling over the Penn Treebank.

The largest LSTM we train (h=1500) achieves comparable results to the Recurrent Highway Network (RHN) (Zilly et al., 2016), a human developed custom RNN architecture, but with approximately double the number of parameters. Although the LSTM uses twice as many parameters, the RHN runs a cell 10 times per timestep (referred to as recurrence depth), resulting in far more computation. This would likely result in the RHN being slower than the larger LSTM model during both training and prediction, especially when factoring in optimized LSTM implementations such as NVIDIA’s cuDNN LSTM.

WikiText-2 Results: We compare our WikiText-2 results to Inan et al. (2016) who introduced weight tying between the embedding and softmax weights. While we did not perform any hyperparamter search over the coefficient values of α and β for AR and TAR, instead using the best results from PTB, we find them to still be quite effective. The baseline LSTM already achieves a 2.1 perplexity improvement over the variational LSTM models from Inan et al. (2016), including one which uses an augmented loss that modifies standard cross entropy with temperature and a KL divergence based loss. When the AR and TAR parameters optimized over PTB are used, perplexity falls an additional 3.1 perplexity. This is not as strong an improvement as seen on the PTB dataset and may be due to the increased complexity of the dataset (larger vocabulary meaning a longer tail of usage, different genre, and so on) or may just be due to the lack of hyperparamter tuning.

AR and TAR for GRU and tanh RNN: While neither the GRU (Cho et al., 2014) or tanh RNN are traditionally used in language modeling, we wanted to see the generality of AR and TAR to other types of RNN cells. We applied the best values of α and β for an LSTM cell to the GRU and tanh RNN on PTB without any further search in Table 6. These values are likely quite suboptimal but are sufficient for illustrative purposes. For the GRU, perplexity improved by 2.2 from the baseline. This is a positive sign given the impact of these regularization techniques on a GRU are quite different to that of an LSTM. The LSTM only has ht subjected to AR and TAR, leaving the long term memory ct unregularized, but the GRU uses ht both as output at that timestep and as the hidden state input for the next timestep. For the tanh RNN, the model did not train to acceptable levels at all without the application of AR and TAR. For the tanh RNN, TAR likely forced the recurrent matrix to learn an identity function in order to ensure ht could produce ht+1. This would be important given the weights in this model were randomly initialized and suggests TAR acts as an implicit identity initialization constraint (Le et al., 2015).

For generating text samples, words were sampled using the standard generation script contained in the PyTorch word level language modeling example. WikiText-2 was used given the larger vocabulary and more realistic looking text. Neither the ⟨eos⟩ token nor the ⟨unk⟩ were allowed to be selected. Each paragraph is a separate sample of text with the tokens following Moses (Koehn et al., 2007), joining words with @-@ and dot-decimal split to a @.@ token.

” Something Borrowed ” is the second episode of the fourth season of the American comedy television series The X @-@ Files . The episode was written by David McCarthy and directed by Mark Sacks . It aired in the United States on November 30 , 2011 , as a two @-@ episode episode, watched by 4 @.@ 9 million viewers and was the highest rated show on the Fox network .

The work of Olivier ’s , a large 1950s table with the center of a vinyl beam , was used for bony motifs from the upper @-@ production model via the Club van X . The modified works were released in the museum , which gave its namesake to the visual designers in Hong Kong .

The first prototype was released for the PlayStation 4 , containing the 2 @.@ 5 part series , with 3 @.@ 5 million copies sold . In October 2010 , Activision announced that both the game and the main gameplay was “ downloadable ” . The first game , titled Snow : The Game of the Battlefield 2 : The Ultimate Warrior , was the third anime game , and was released in August 2016 .

The German Land Forces had been reversed in the early 1990s , although the Soviet Union continued to deter NDH forces in the nation . The area was moved to Sarajevo , and the troops were despatched to the National Register of Historic Places in the summer of 1918 for the establishment of full political and social parties . The Polish language was protected by the Soviet Union , which was the first Polish continental conflict of the newly formed Union in North America , and the Polish Front with the last of the Polish Communist Party .