We propose a method for an agent to revise its incomplete probabilistic beliefs when a new piece of propositional information is observed. In this work, an agent's beliefs are represented by a set of probabilistic formulae -- a belief base. The method involves determining a representative set of 'boundary' probability distributions consistent with the current belief base, revising each of these probability distributions and then translating the revised information into a new belief base. We use a version of Lewis Imaging as the revision operation. The correctness of the approach is proved. The expressivity of the belief bases under consideration are rather restricted, but has some applications. We also discuss methods of belief base revision employing the notion of optimum entropy, and point out some of the benefits and difficulties in those methods. Both the boundary distribution method and the optimum entropy method are reasonable, yet yield different results. 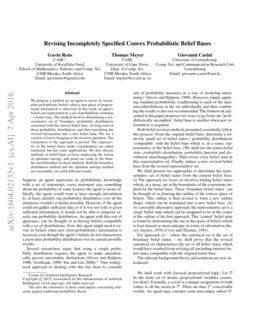 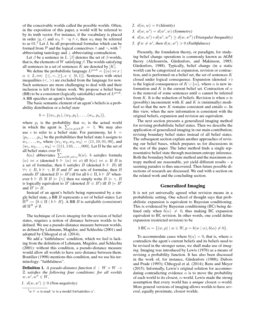 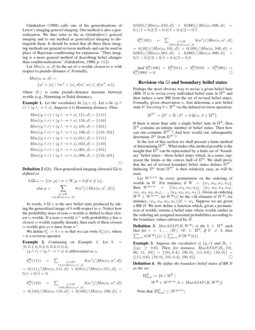 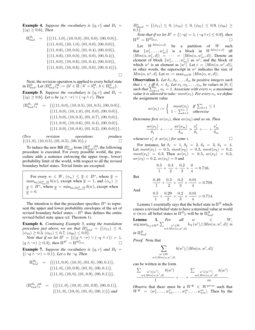 Over time, there have hen refinements in the way that probability distri...
Paul Snow, et al. ∙

We introduce a novel class of adjustment rules for a collection of belie...
Sabina Marchetti, et al. ∙

On the use of evidence theory in belief base revision

This paper deals with belief base revision that is a form of belief chan...
Raïda Ktari, et al. ∙

On Stochastic Belief Revision and Update and their Combination

I propose a framework for an agent to change its probabilistic beliefs w...
Gavin Rens, et al. ∙

Kutato: An Entropy-Driven System for Construction of Probabilistic Expert Systems from Databases

Kutato is a system that takes as input a database of cases and produces ...
Edward H. Herskovits, et al. ∙

To accommodate cases where b(α)=0, that is, where α contradicts the agent’s current beliefs and its beliefs need to be revised in the stronger sense, we shall make use of imaging. Imaging was introduced by Lewis (1976) as a means of revising a probability function. It has also been discussed in the work of, for instance, Gärdenfors (1988); Dubois and Prade (1993); Chhogyal et al. (2014); Rens and Meyer (2015). Informally, Lewis’s original solution for accommodating contradicting evidence α is to move the probability of each world to its closest, α-world. Lewis made the strong assumption that every world has a unique closest α-world. More general versions of imaging allows worlds to have several, equally proximate, closest worlds.

Gärdenfors (1988) calls one of his generalizations of Lewis’s imaging general imaging. Our method is also a generalization. We thus refer to his as Gärdenfors’s general imaging and to our method as generalized imaging to distinguish them. It should be noted that all three these imaging methods are general revision methods and can be used in place of Bayesian conditioning for expansion. “Thus imaging is a more general method of describing belief changes than conditionalization,” (Gärdenfors, 1988, p. 112).

Let Min(α,w,d) be the set of α-worlds closest to w with respect to pseudo-distance d. Formally,

where d(⋅) is some pseudo-distance measure between worlds (e.g., Hamming or Dalal distance).

Let the vocabulary be {q,r,s}. Let α be (q∧r)∨(q∧¬r∧s). Suppose d is Hamming distance. Then

Then generalized imaging (denoted GI) is defined as

We define b∘α:=b∘α so that we can write b∘α(w), where ∘ is a revision operator.

(q∧r)∨(q∧¬r∧s) is abbreviated as α.

Perhaps the most obvious way to revise a given belief base (BB) B is to revise every individual belief state in ΠB and then induce a new BB from the set of revised belief states. Formally, given observation α, first determine a new belief state bα for every b∈ΠB via the defined revision operation:

If there is more than only a single belief state in ΠB, then ΠB contains an infinite number of belief states. Then how can one compute ΠBα? And how would one subsequently determine Bα from ΠBα?

In the rest of this section we shall present a finite method of determining ΠBα. What makes this method possible is the insight that ΠB can be represented by a finite set of ‘boundary’ belief states – those belief states which, in a sense, represent the limits or the convex hull of ΠB. We shall prove that the set of revised boundary belief states defines ΠBα. Inducing Bα from ΠBα is then relatively easy, as will be seen.

Next, the revision operation is applied to every belief state in ΠBbnd. Let (ΠBbnd)GIα:={b′∈Π∣b′=bGIα,b∈ΠBbnd}.

To induce the new BB Bαbnd from (ΠBbnd)GIα, the following procedure is executed. For every possible world, the procedure adds a sentence enforcing the upper (resp., lower) probability limit of the world, with respect to all the revised boundary belief states. Trivial limits are excepted.

The intention is that the procedure specifies Bα to represent the upper and lower probability envelopes of the set of revised boundary belief states – Bα thus defines the entire revised belief state space (cf. Theorem 1).

Let δ1,δ2,…,δm be positive integers such that i<j iff δi<δj. Let ν1,ν2,…,νm be values in [0,1] such that ∑mk=1νk=1. Associate with every νi a maximum value it is allowed to take: most(νi). For every νi, we define the assignment value

whenever ν′i≠av(νi) for some i. □

Lemma 1 essentially says that the belief state in ΠB which causes a revised belief state to have a maximal value at world w (w.r.t. all belief states in ΠB), will be in ΠBbnd.

can be written in the form

That is, by Observation 1, for some bx∈ΠBbnd, for all w∈W. Therefore, is in ΠBbnd. ∎

We now consider the cases where w∈[α].

can be written in the form

Then by Observation 1, ¯¯bX(w) is in ΠBbnd. And also by Lemma 1, the belief state in ΠBbnd identified by ¯¯bX(w) must be the one which maximizes

With a symmetrical argument, it can be shown that y–w=Y––w. ∎

In intuitive language, the following theorem says that the BB determined through the method of revising boundary belief states captures exactly the same beliefs and ignorance as the belief states in ΠB which have been revised. This correspondence relies on the fact that the upper and lower probability envelopes of ΠB can be induce from ΠBbnd, which is what Lemma 2 states.

Revising via a Representative Belief State

We shall represent ΠB (and thus B) by the single ‘least biased’ belief state, that is, the belief state in ΠB with highest entropy:

where b is a belief state.

Traditionally, given some set of distributions Π, the most entropic distribution in Π is defined as

The above distribution can be found directly by applying the principle of maximum entropy: The true belief state is estimated to be the one consistent with known constraints, but is otherwise as unbiased as possible, or “Given no other knowledge, assume that everything is as random as possible. That is, the probabilities are distributed as uniformly as possible consistent with the available information,”

(Poole and Mackworth, 2010). Obviously world 00 must be assigned probability 0.1. And the remaining 0.9 probability mass should be uniformly spread across the other three worlds.

It has been extensively argued (Jaynes, 1978; Shore and Johnson, 1980; Paris and Vencovská, 1997) that maximum entropy is a reasonable inference mechanism, if not the most reasonable one (w.r.t. probability constraints). And in the sense that the boundary belief states method requires no compression / information loss, it also seems like a very reasonable inference mechanism for revising BBs as defined here. Resolving this misalignment in the results of the two methods is an obvious task for future research.

Some important aspects still missing from our framework are the representation of conditional probabilistic information such as is done in the work of Kern-Isberner, and the association of information with its level of entrenchment. On the latter point, when one talks about probabilities or likelihoods, if one were to take a frequentist perspective, information observed more (less) often should become more (less) entrenched. Or, without considering observation frequencies, an agent could be designed to have, say, one or two sets of deeply entrenched background knowledge (e.g., domain constraints) which does not change or is more immune to change than ‘regular’ knowledge.

Given that we have found that the belief base resulting from revising via the boundary-belief-states approach differs from the belief base resulting from revising via the representative-belief-state approach, the question arises, When is it appropriate to use a representative belief state defined as the most entropic belief state of a given set ΠB? This is an important question, especially due to the popularity of employing the Maximum Entropy principle in cases of undespecified probabilistic knowledge (Jaynes, 1978; Goldszmidt, Morris, and Pearl, 1990; Hunter, 1991; Voorbraak, 1999; Kern-Isberner, 2001; Kern-Isberner and Rödder, 2004) and the principle’s well-behavedness (Shore and Johnson, 1980; Paris, 1994; Kern-Isberner, 1998).

Katsuno and Mendelzon (1991) modified the eight AGM belief revision postulates (Alchourrón, Gärdenfors, and Makinson, 1985) to the following six (written in the notation of this paper), where ∗ is some revision operator.333In these postulates, it is sometimes necessary to write an observation α as a BB, i.e., as {(α)=1} – in the present framework, observations are regarded as certain.

Testing the various revision operations against these postulates is left for a sequel paper.

Then MCE inference (denoted (MCI)) is defined as

In the following example, we interpret revision as MCE inference.