Reversible data hiding in encrypted images (RDHEI) receives growing attention because it protects the content of the original image while the embedded data can be accurately extracted and the original image can be reconstructed lossless. To make full use of the correlation of the adjacent pixels, this paper proposes an RDHEI scheme based on pixel prediction and bit-plane compression. Firstly, to vacate room for data embedding, the prediction error of the original image is calculated and used for bit-plane rearrangement and compression. Then, the image after vacating room is encrypted by a stream cipher. Finally, the additional data is embedded in the vacated room by multi-LSB substitution. Experimental results show that the embedding capacity of the proposed method outperforms the state-of-the-art methods. 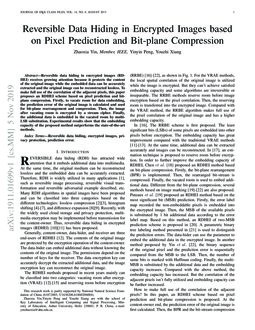 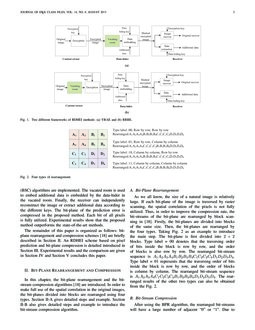 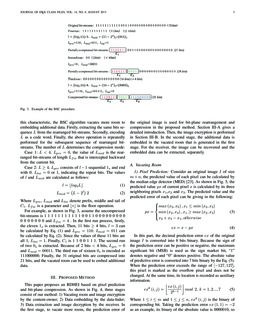 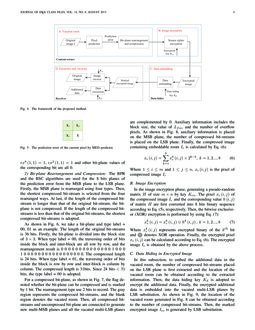 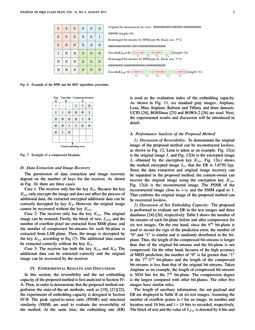 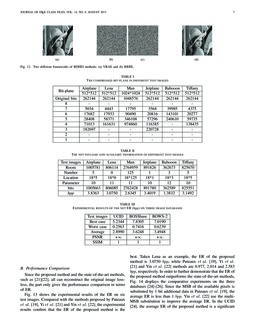 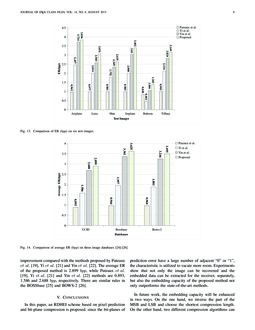 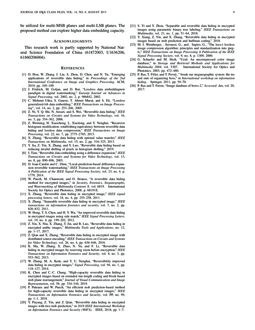 As a technology that can prevent the information of original image and a...
Youqing Wu, et al. ∙

Reversible data hiding (RDH) has attracted wide attention that it embeds additional data into multimedia. At the same time, the original medium can be reconstructed lossless and the embedded data can be accurately extracted. Therefore, RDH is widely utilized in many applications [1], such as reversible image processing, reversible visual transformation and reversible adversarial example described, etc. Many RDH algorithms in spatial images have been proposed and can be classified into three categories based on the different technologies: lossless compression [2][3], histogram shifting [4]-[7], and difference expansion [8][9]. Recently, with the widely used cloud storage and privacy protection, multimedia encryption may be implemented before transmission for the content-owner. Thus, reversible data hiding in encrypted images (RDHEI) [10][11] has been proposed.

The RDHEI methods proposed in recent years mainly can be classified into two categories: vacating room after encryption (VRAE) [12]-[15] and reserving room before encryption (RRBE) [16]-[22], as shown in Fig. 1. For the VRAE methods, the local spatial correlation of the original image is utilized while the image is encrypted. But they can’t achieve satisfied embedding capacity and some algorithms are irreversible or inseparable. The RRBE methods reserve room before image encryption based on the pixel correlation. Then, the reserving room is transferred into the encrypted image. Compared with the VRAE method, the RRBE algorithm makes full use of the pixel correlation of the original image and has a higher embedding capacity.

In [16], The RRBE scheme is first proposed. The least significant bits (LSBs) of some pixels are embedded into other pixels before encryption. The embedding capacity has great improvement compared with the traditional VRAE methods [11]-[13]. At the same time, additional data can be extracted accurately and images can be reconstructed. In [17], an estimation technique is proposed to reserve room before encryption. In order to further improve the embedding capacity of RDHEI, Chen

et al. [18] proposed an RDHEI method based on bit-plane compression. Firstly, the bit-plane rearrangement (BPR) is implemented. Then, the rearranged bit-stream is compressed. Finally, the vacated room is used to embed additional data. Different from the bit-plane compression, several methods based on image marking [19]-[22] are also proposed. Puteaux et al. [19] proposed an RDHEI method based on the most significant bit (MSB) prediction. Firstly, the error label map recorded the non-embeddable pixels is embedded into the encrypted image. Then, the MSB of the available pixels is substituted by 1 bit additional data according to the error label map. Based on this method, an RDHEI of two-MSB prediction scheme is proposed in [20]. A parametric binary tree labeling method presented in [21] is used to distinguish the prediction errors. The data-hider can use the parameter to embed the additional data in the encrypted image. In another method proposed by Yin et al. [22], the binary sequence of the original pixel and the prediction error is sequentially compared from the MSB to the LSB. Then, the number of same bits is marked with Huffman coding. Finally, the multi-MSB is substituted by the additional data and the embedding capacity increases. Compared with the above method, the embedding capacity has increased. But the correlation of the adjacent pixels isn’t fully utilized and embedding capacity can be further increased.

How to make full use of the correlation of the adjacent pixels? In this paper, an RDHEI scheme based on pixel prediction and bit-plane compression is proposed. At the content-owner end, the prediction error of the original image is first calculated. Then, the BPR and the bit-stream compression (BSC) algorithms are implemented. The vacated room is used to embed additional data is embedded by the data-hider in the vacated room. Finally, the receiver can independently reconstruct the image or extract additional data according to the different keys. The bit-plane of the prediction error is compressed in the proposed method. Each bit of all pixels is fully utilized. Experimental results show that the proposed method outperforms the state-of-the-art methods.

The remainder of this paper is organized as follows: bit-plane rearrangement and compression schemes [18] are briefly described in Section II. An RDHEI scheme based on pixel prediction and bit-plane compression is detailed introduced in Section III. Experimental results and the comparison are given in Section IV and Section V concludes this paper.

In this chapter, the bit-plane rearrangement and the bit-stream compression algorithms [18] are introduced. In order to make full use of the spatial correlation in the original images, the bit-planes divided into blocks are rearranged using four types. Section II-A gives detailed steps and example. Section II-B also gives detailed steps and example to introduce the bit-stream compression algorithm.

Case 1: L<4. Lpre=0, the value of Lmid is the rearranged bit-streams of length Lfix that is intercepted backward from the current bit.

Case 2: L≥4. Lpre consists of l−1 sequential 1s and end with 0. Ltai=0 or 1, indicating the repeat bits. The values of l and Lmid are calculated as follows:

Where Lpre, Lmid and Ltai denote prefix, middle and tail of C1. Lfix is a parameter and ⌊∗⌋ is the floor operation.

This paper proposes an RDHEI based on pixel prediction and bit-plane compression. As shown in Fig. 4, three stages consist of our method: 1) Vacating room and image encryption by the content-owner; 2) Data embedding by the data-hider; 3) Data extraction and image decryption by the receiver. In the first stage, to vacate more room, the prediction error of the original image is used for bit-plane rearrangement and compression in the proposed method. Section III-A gives a detailed introduction. Then, the image encryption is performed in Section III-B. In the second stage, the additional data is embedded in the vacated room that is generated in the first stage. For the receiver, the image can be recovered and the embedded data can be extracted, separately.

In this part, the decimal prediction error ex of the original image I is converted into 8 bits binary. Because the sign of the prediction error can be positive or negative, the maximum significant bit (MSB) is used as the sign marker bit, “1” denotes negative and “0” denotes positive. The absolute value of predictive error is converted into 7 bits binary by the Eq. (5). When the prediction error exceeds the range of [−127,127], this pixel is marked as the overflow pixel and does not be changed. At the same time, its location is recorded as auxiliary information.

In the image encryption phase, generating a pseudo-random matrix

H of size m×n by key Ken. The pixel xc(i,j) of the compressed image Ic and the corresponding value h(i,j) of matrix H are first converted into 8 bits binary sequence according to Eq. (5), respectively. Then, the bitwise exclusive-or (XOR) encryption is performed by using Eq. (7):

Where xke(i,j) represents encrypted binary of the kth bit and ⨁ denotes XOR operation. Finally, the encrypted pixel xe(i,j) can be calculated according to Eq. (6). The encrypted image Ie is obtained by the above process.

The permission of data extraction and image recovery depend on the number of keys for the receiver. As shown in Fig. 10, there are three cases:

Case 1: The receiver only has the key Kd. Because the key Ken only encrypts the image and does not affect the process of additional data, the extracted encrypted additional data can be correctly decrypted by key Kd. However, the original image cannot be recovered without the key Ken.

Case 3: The receiver has both the key Ken and Kd. The additional data can be extracted correctly and the original image can be recovered by the receiver.

In this section, the reversibility and the net embedding capacity of the proposed method is first analyzed in Section IV-A. Then, in order to demonstrate that the proposed method outperforms the state-of-the-art methods, such as [19], [21][22], the experiments of embedding capacity is designed in Section IV-B. The peak signal-to-noise ratio (PSNR) and structural similarity (SSIM) are used to evaluate the reversibility of the method. At the same time, the embedding rate (ER) is used as the evaluation index of the embedding capacity. As shown in Fig. 11, six standard gray images: Airplane, Lena, Man, Jetplane, Baboon and Tiffany and three datasets: UCID [24], BOSSbase [25] and BOWS-2 [26] are used. Next, the experimental results and discussion will be introduced in detail.

Since the proposed method and the state-of-the-art methods, such as [21][22], all can reconstruct the original image lossless, the part only gives the performance comparison in terms of ER.

In this paper, an RDHEI scheme based on pixel prediction and bit-plane compression is proposed. since the bit-planes of prediction error have a large number of adjacent “0” or “1”, the characteristic is utilized to vacate more room. Experiments show that not only the image can be recovered and the embedded data can be extracted for the receiver, separately, but also the embedding capacity of the proposed method not only outperforms the state-of-the-art methods.

In future work, the embedding capacity will be enhanced in two ways. On the one hand, we inverse the part of the MSB and LSB and choose the shortest compression length. On the other hand, two different compression algorithms can be utilized for multi-MSB planes and multi-LSB planes. The proposed method can explore higher data embedding capacity.