In recent years, reversible data hiding (RDH), a new research hotspot in the field of information security, has been paid more and more attention by researchers. Most of the existing RDH schemes do not fully take it into account that natural image's texture has influence on embedding distortion. The image distortion caused by embedding data in the image's smooth region is much smaller than that in the unsmooth region, essentially, it is because embedding additional data in the smooth region corresponds to fewer invalid shifting pixels (ISPs) in histogram shifting. Thus, we propose a RDH scheme based on the images texture to reduce invalid shifting of pixels in histogram shifting. Specifically, first, a cover image is divided into two sub-images by the checkerboard pattern, and then each sub-image's fluctuation values are calculated. Finally, additional data can be embedded into the region of sub-images with smaller fluctuation value preferentially. The experimental results demonstrate that the proposed method has higher capacity and better stego-image quality than some existing RDH schemes. 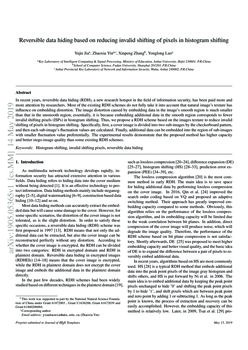 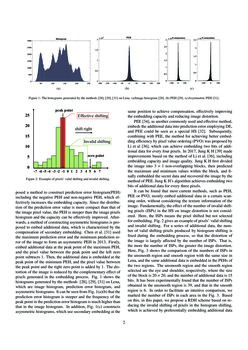 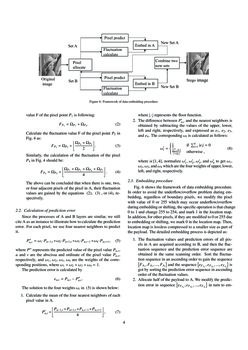 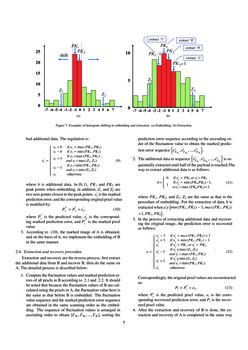 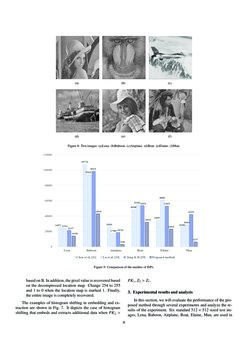 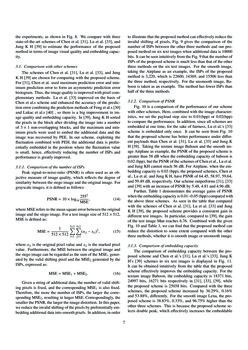 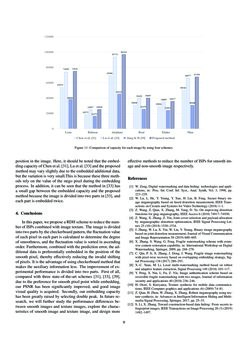 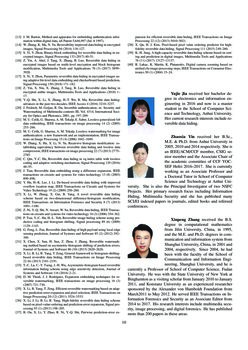 The lossless compression algorithm fridrich2001invertible is the most common method in early RDH. The main idea is to save space for hiding additional data by performing lossless compression on the cover image. In 2016, Qin et al. qin2016reversible improved the search order coding based on VQ and proposed an adaptive switching method. Their approach has greatly improved embedding capacity compared to some methods. Obviously, this algorithm relies on the performance of the lossless compression algorithm, and its embedding capacity will be limited due to the weak correlation between bit planes. In addition, direct compression of the cover image will produce noise, which will degrade the image quality. Therefore, the performance of the RDH scheme based on bit plane compression is not satisfactory. Shortly afterwards, DE  tian2003reversible was proposed to meet higher embedding capacity and better visual quality, and the basic idea of DE is to expand the difference between a pair of pixels to reversibly embed additional data.

PEE thodi2007expansion , as another commonly used and effective method, embeds the additional data into prediction error employing DE, and PEE could be seen as a special HS li2013general . Subsequently, combining with PEE, the method for achieving better embedding efficiency by pixel value ordering (PVO) was proposed by Li et al li2013high , which can achieve embedding two bits of additional data for every four pixels. In 2017, Jung K H jung2017high made improvements based on the method of Li et al. li2013high , including embedding capacity and image quality. Jung K H first divided the image into 3×1 non-overlapping blocks, then predicted the maximum and minimum values within the block, and finally embedded the secret data and recovered the image by the method of PEE. Jung K H’s algorithm achieves embedding two bits of additional data for every three pixels.

The structure of the rest paper is as follows. The detailed process of the proposed scheme is introduced in Section 2. Next, Section 3 presents the results and analysis of the experiment. Finally, we summarize the paper in Section  4.

In this section, we will describe the proposed method in detail. Firstly, the detailed process of calculating the fluctuation value is introduced. Secondly, give the process of how to calculate the prediction error. Finally, the procedure of embedding and extracting is given.

As shown in Fig. 4, the image is divided into two sets, A and B, in a checkerboard pattern, regardless of the pixels on the boundary, set A is gray while set B is white. Since the calculation methods of the fluctuation values in A and B are the same, here, we will take A as an example to introduce the specific scheme of calculating the fluctuation value.

Since the processes of A and B layers are similar, we still cite A as an instance to illustrate how to calculate the prediction error. For each pixel, we use four nearest neighbors to predict it.

The prediction error is calculated by

The solution to the four weights ωi in  (5) is shown below:

Fig. 6 shows the framework of data embedding procedure. In order to avoid the underflow/overflow problem during embedding, regardless of boundary pixels, we modify the pixel with value of 0 or 255 which may occur underflow/overflow during embedding or shifting, the specific operation is that change 0 to 1 and change 255 to 254, and mark 1 in the location map. In addition, for other pixels, if they are modified to 0 or 255 due to embedding or shifting, we mark 0 in the location map. Then, location map is lossless compressed to a smaller size as part of the payload. The detailed embedding process is depicted as:

Extraction and recovery are the reverse process, first extract the additional data from B and recover B, then do the same on A. The detailed process is described below:

In this section, we will evaluate the performance of the proposed method through several experiments and analyze the results of the experiment. Six standard 512×512 sized test images, Lena, Baboon, Airplane, Boat, Elaine, Man, are used in the experiments, as shown in Fig. 8. We compare with three state-of-the-art schemes of Chen et al. chen2013reversible , Lu et al. lu2016asymmetric , and Jung K H jung2017high

to estimate the performance of the proposed method in terms of image visual quality and embedding capacity.

3.1 Comparison with other schemes

The schemes of Chen et al. chen2013reversible , Lu et al. lu2016asymmetric , and Jung K H jung2017high are chosen for comparing with the proposed scheme. For chen2013reversible , Chen et al. used maximum prediction error and minimum prediction error to form an asymmetric prediction error histogram. Thus, the image quality is improved with pixel complementary methods. Lu et al. lu2016asymmetric improved on the basis of Chen et al.’s scheme and enhanced the accuracy of the prediction error combining the prediction methods of Feng et al.’s feng2012reversible and Lukac et al.’s lukac2004digital , so there is a big improvement in image quality and embedding capacity. In jung2017high , Jung K H sorted the pixels in the block after dividing the image into a number of 3×1 non-overlapping blocks, and the maximum and minimum pixels were used to embed the additional data and the image was recovered by PEE. In our scheme, exploiting the fluctuation combined with PEH, the additional data is preferentially embedded in the position where the fluctuation value is small, hence, effectively reducing the number of ISPs and performance is greatly improved.

3.1.1 Comparison of the number of ISPs

Peak signal-to-noise-ratio (PSNR) is often used as an objective measure of image quality, which reflects the degree of similarity between the stego image and the original image. For grayscale images, it is defined as follows:

where MSE refers to the mean square error between the original image and the stego image. For a test image size of 512×512, MSE is defined as:

Given a string of additional data, the number of valid shifting pixels is fixed, and the corresponding MSE1 is also fixed. Therefore, the more the number of ISPs, the larger the corresponding MSE2, resulting in larger MSE. Correspondingly, the smaller the PSNR, the larger the image distortion. In this paper, we reduce the invalid shifting of the pixels by preferentially embedding additional data into smooth pixels. In addition, in order to illustrate that the proposed method can effectively reduce the invalid shifting of pixels, Fig. 9 gives the comparison of the number of ISPs between the other three methods and our proposed method on six text images when additional data is 10000 bits. It can be seen intuitively from the Fig. 9 that the number of ISPs of the proposed scheme is much less than that of the other three methods on the six test images. For the smooth image, taking the Airplane as an example, the ISPs of the proposed method is 3,220, which is 22600, 14369, and 15506 less than the three method, respectively. For the unsmooth image, Baboon is taken as an example. The method has fewer ISPs than half of the three methods.

Fig. 10 is a comparison of the performance of our scheme with other schemes. Here, combined with the image characteristics, we set the payload step size to 0.01(bpp) or 0.02(bpp) to compare the performance. In addition, since all schemes are embedded at one time, for the sake of fairness, Lu et al.’s lu2016asymmetric scheme is embedded only once. It can be seen from Fig. 10 that the proposed scheme has better performance under different payloads than Chen et al. chen2013reversible , Lu et al. lu2016asymmetric and Jung K H jung2017high . Taking the texture image Baboon and the smooth image Airplane as example, the PSNR of the proposed scheme is greater than 58 dB when the embedding capacity of baboon is 0.02 (bpp), but the PSNR of the schemes of Chen et al., Lu et al. and Jung KH cannot reach 56 dB. For Airplane, when the embedding capacity is 0.03 (bpp), the proposed schemes, Chen et al., Lu et al. and Jung K H, have PSNR of 64.45, 58.97, 59.64, and 59.49 dB, respectively. Our scheme outperforms chen2013reversible , lu2016asymmetric and jung2017high with an increase of PSNR by 5.48, 4.81 and 4.96 dB.

Further, Table 1 demonstrates the average gains of PSNR when the embedding capacity is 0.01∼0.05 (bpp) compared with the above three schemes. As seen in the table that compared with the schemes of Chen et al. chen2013reversible , Lu et al. lu2016asymmetric and Jung K H jung2017high , the proposed scheme provides a consistent gain in different test images. In particular, compared to jung2017high , the gain of the test image Man reaches 6.76. Combined with the given Fig. 10 and Table 1, we can find that the proposed method can reduce the distortion to some extent compared with the other three methods, whether it is smooth image or unsmooth image.

In this paper, we propose a RDH scheme to reduce the number of ISPs combined with image texture. The image is divided into two parts by the checkerboard pattern, the fluctuation value of each pixel in each part is calculated to determine the degree of smoothness, and the fluctuation value is sorted in ascending order. Furthermore, combined with the prediction error, the additional data is preferentially embedded in the position of the smooth pixel, thereby effectively reducing the invalid shifting of pixels. It is the advantage of using checkerboard method that makes the auxiliary information less. The improvement of experimental performance is divided into two parts. First of all, compared with three state-of-the-art schemes chen2013reversible , lu2016asymmetric , jung2017high , due to the preference for smooth pixel point while embedding, our PSNR has been significantly improved, and good image visual quality is acquired. Secondly, our embedding capacity has been greatly raised by selecting double peak. In future research, we will further study the performance differences between smooth images and texture images, explore the characteristics of smooth image and texture image, and design more effective methods to reduce the number of ISPs for smooth image and non-smooth image respectively.