Attention mechanisms have improved the performance of NLP tasks while providing for appearance of model interpretability. Self-attention is currently widely used in NLP models, however it is difficult to interpret due to the numerous attention distributions. We hypothesize that model representations can benefit from label-specific information, while facilitating interpretation of predictions. We introduce the Label Attention Layer: a new form of self-attention where attention heads represent labels. We validate our hypothesis by running experiments in constituency and dependency parsing and show our new model obtains new state-of-the-art results for both tasks on the English Penn Treebank. Our neural parser obtains 96.34 F1 score for constituency parsing, and 97.33 UAS and 96.29 LAS for dependency parsing. Additionally, our model requires fewer layers, therefore, fewer parameters compared to existing work. 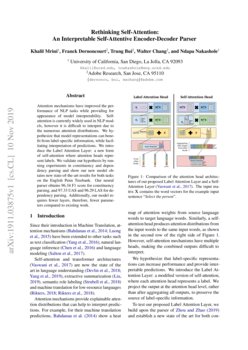 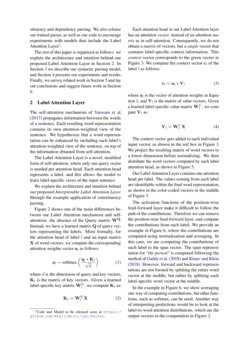 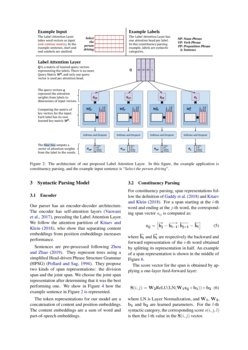 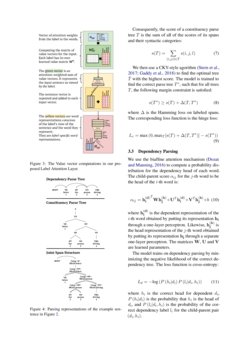 Constituency Parsing with a Self-Attentive Encoder

We demonstrate that replacing an LSTM encoder with a self-attentive arch...
Nikita Kitaev, et al. ∙

Attention mechanisms provide explainable attention distributions that can help to interpret predictions. For example, for their machine translation predictions, Bahdanau et al. (2014) show a heat map of attention weights from source language words to target language words. Similarly, a self-attention head produces attention distributions from the input words to the same input words, as shown in the second row of the right side of Figure 1. However, self-attention mechanisms have multiple heads, making the combined outputs difficult to interpret.

We hypothesize that label-specific representations can increase performance and provide interpretable predictions. We introduce the Label Attention Layer: a modified version of self-attention, where each attention head represents a label. We project the output at the attention head level, rather than after aggregating all outputs, to preserve the source of label-specific information.

To test our proposed Label Attention Layer, we build upon the parser of Zhou and Zhao (2019) and establish a new state of the art for both constituency and dependency parsing. We also release our trained parser, as well as our code to encourage experiments with models that include the Label Attention Layer111Code and Model to be released soon at https://github.com/KhalilMrini/LAL-Parser..

The rest of this paper is organized as follows: we explain the architecture and intuition behind our proposed Label Attention Layer in Section 2. In Section 3 we describe our syntactic parsing model, and Section 4 presents our experiments and results. Finally, we survey related work in Section 5 and lay out conclusions and suggest future work in Section 6.

The self-attention mechanism of Vaswani et al. (2017) propagates information between the words of a sentence. Each resulting word representation contains its own attention-weighted view of the sentence. We hypothesize that a word representation can be enhanced by including each label’s attention-weighted view of the sentence, on top of the information obtained from self-attention.

The Label Attention Layer is a novel, modified form of self-attention, where only one query vector is needed per attention head. Each attention head represents a label, and this allows the model to learn label-specific views of the input sentence.

We explain the architecture and intuition behind our proposed Interpretable Label Attention Layer through the example application of constituency parsing.

Figure 2 shows one of the main differences between our Label Attention mechanism and self-attention: the absence of the Query matrix WQ. Instead, we have a learned matrix Q of query vectors representing the labels. More formally, for the attention head of label l and an input matrix X of word vectors, we compute the corresponding attention weights vector al as follows:

where d is the dimension of query and key vectors, Kl is the matrix of key vectors. Given a learned label-specific key matrix WKl, we compute Kl as:

Each attention head in our Label Attention layer has an attention vector, instead of an attention matrix as in self-attention. Consequently, we do not obtain a matrix of vectors, but a single vector that contains label-specific context information. This context vector corresponds to the green vector in Figure 3. We compute the context vector cl of the label l as follows:

where al is the vector of attention weights in Equation 1, and Vl is the matrix of value vectors. Given a learned label-specific value matrix WVl, we compute Vl as:

The context vector gets added to each individual input vector, as shown in the red box in Figure 3. We project the resulting matrix of word vectors to a lower dimension before normalizing. We then distribute the word vectors computed by each label attention head, as shown in Figure 5.

Our Label Attention Layer contains one attention head per label. The values coming from each label are identifiable within the final word representation, as shown in the color-coded vectors in the middle of Figure 5.

6, where the contributions are computed using normalization and averaging. In this case, we are computing the contributions of each label to the span vector. The span representation for “the person” is computed following the method of Gaddy et al. (2018) and Kitaev and Klein (2018). However, forward and backward representations are not formed by splitting the entire word vector at the middle, but rather by splitting each label-specific word vector at the middle.

In the example in Figure 6, we show averaging one way of computing contributions, but other functions, such as softmax, can be used. Another way of interpreting predictions would be to look at the label-to-word attention distributions, which are the output vectors in the computation in Figure 2.

Our parser has an encoder-decoder architecture. The encoder has self-attention layers Vaswani et al. (2017), preceding the Label Attention Layer. We follow the attention partition of Kitaev and Klein (2018), who show that separating content embeddings from position embeddings increases performance.

Sentences are pre-processed following Zhou and Zhao (2019). They represent trees using a simplified Head-driven Phrase Structure Grammar (HPSG) Pollard and Sag (1994). They propose two kinds of span representations: the division span and the joint span. We choose the joint span representation after determining that it was the best performing one. We show in Figure 4 how the example sentence in Figure 2 is represented.

The token representations for our model are a concatenation of content and position embeddings. The content embeddings are a sum of word and part-of-speech embeddings.

For constituency parsing, span representations follow the definition of Gaddy et al. (2018) and Kitaev and Klein (2018). For a span starting at the i-th word and ending at the j-th word, the corresponding span vector sij is computed as:

The score vector for the span is obtained by applying a one-layer feed-forward layer:

where LN is Layer Normalization, and W1, W2, b1 and b2 are learned parameters. For the l-th syntactic category, the corresponding score s(i,j,l) is then the l-th value in the S(i,j) vector.

Consequently, the score of a constituency parse tree T is the sum of all of the scores of its spans and their syntactic categories:

We then use a CKY-style agorithm Stern et al. (2017); Gaddy et al. (2018) to find the optimal tree ^T with the highest score. The model is trained to find the correct parse tree T∗, such that for all trees T, the following margin constraint is satisfied:

is the Hamming loss on labeled spans. The corresponding loss function is the hinge loss:

to compute a probability distribution for the dependency head of each word. The child-parent score

αij for the j-th word to be the head of the i-th word is:

through a one-layer perceptron. Likewise,

h(h)j is the head representation of the j-th word obtained by putting its representation hj through a separate one-layer perceptron. The matrices W, U and V are learned parameters.

The model trains on dependency parsing by minimizing the negative likelihood of the correct dependency tree. The loss function is cross-entropy:

We evaluate our model on the English Penn Treebank Marcus et al. (1993) benchmark dataset, and use the Stanford tagger Toutanova et al. (2003) to predict part-of-speech tags.

For the evaluation, we follow standard practice: using the EVALB algorithm Sekine and Collins (1997) for constituency parsing, and reporting results without punctuation for dependency parsing.

In our experiments, the Label Attention Layer has 128 dimensions for the query, key and value vectors, as well as for the output vector of each label attention head. For the dependency and span scores, we use the same hyperparameters as

As shown in Figure 6, our Label Attention Layer is interpretable only if there is no position-wise feed-forward layer. We investigate the impact of removing this component from the LAL.

Table 2 shows the results of our experiments varying the number of self-attention layers in our parser’s encoder. The best-performing option is 3 layers. However, removing the position-wise feed-forward layer and residual dropout actually decreases performance.

Before the HPSG-based model of Zhou and Zhao (2019), the previous state-of-the-art model architecture in constituency parsing was held by Kitaev and Klein (2018). The latter use an encoder-decoder parser. The novelty of Kitaev and Klein (2018) is in their self-attentive encoder, where they stack multiple levels of self-attention to embed words. The resulting word embeddings are fed onto a decoder, which they borrow from Stern et al. (2017).

where b1 and b2 are biases, s(i,j) is a vector of dimensionality L (the number of possible nonterminal labels), and rij is computed as:

Therefore, s(i,j,l) indicates the score for the span of words wi,...,wj to be labelled with non-terminal l. These scores are then used in a CKY-style algorithm that produces the final parse tree.

Kitaev and Klein (2018) redefine rij as the following:

None of these papers provided visualisations of their learned attention distributions, but Kitaev and Klein (2018) and Gaddy et al. (2018) do extensive interpretation studies, using ablation and probing of linguistic theories.

In this paper, we introduce a revised form of self-attention: the Label Attention Layer. In our proposed architecture, attention heads represent labels. We have only one learned vector as query, rather than a matrix, thereby diminishing the number of parameters per attention head. We incorporate our Label Attention Layer into the HPSG parser Zhou and Zhao (2019) and obtain state-of-the-art results on the English Penn Treebank benchmark dataset. Our results show 96.34 F1 score for constituency Parsing, and 97.33 UAS and 96.29 LAS for dependency parsing.

In future work, we want to investigate the interpretability of the Label Attention Layer, notably through the label-to-word attention distributions and the contributions of each label attention head. We also want to incorporate it in more self-attentive NLP models for other tasks.