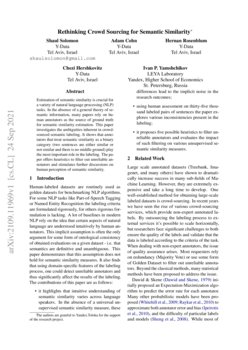 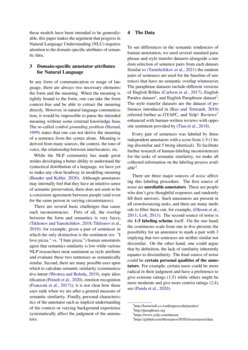 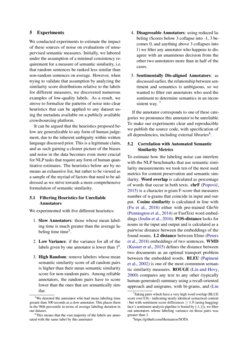 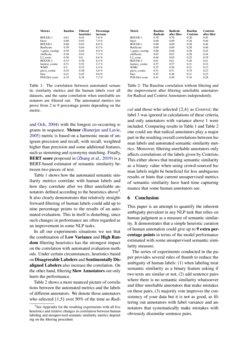 Predicting the Semantic Textual Similarity with Siamese CNN and LSTM

Not just a matter of semantics: the relationship between visual similarity and semantic similarity

Human-labeled datasets are routinely used as golden datasets for benchmarking NLP algorithms. For some NLP tasks like Part-of-Speech Tagging or Named Entity Recognition the labeling criteria are formulated rigorously, for others rigorous formulation is lacking. A lot of baselines in modern NLP rely on the idea that certain aspects of natural language are understood intuitively by human annotators. This implicit assumption is often the only argument for some form of ontological consistency of obtained evaluations on a given dataset - i.e. that semantics are definitive and unambiguous. This paper demonstrates that this assumption does not hold for semantic similarity measures. It also finds that using domain-specific features of the labeling process, one could detect unreliable annotators and thus significantly affect the results of the labeling. The contributions of this paper are as follows:

Large scale annotated datasets (Treebank, Imagenet, and many others) have shown to dramatically increase success in many sub-fields of Machine Learning. However, they are extremely expensive and take a long time to develop. One well-established method for obtaining large-scale labeled datasets is crowd-sourcing. In recent years we have seen the rise of various crowd-sourcing services, which provide non-expert annotated labels. By outsourcing the labeling process to external services it’s possible to scale horizontally, but researchers face significant challenges to both ensure the quality of the labels and validate that the data is labeled according to the criteria of the task. When dealing with non-expert annotators, the issue of quality assurance arises. Most requesters rely on redundancy (Majority Vote) or use some form of Golden Dataset to filter out unreliable annotators. Beyond the classical methods, many statistical methods have been proposed to address the issue.

initially proposed an Expectation-Maximization algorithm to predict the error rate for each annotator. Many other probabilistic models have been proposed

(Whitehill et al., 2009; Raykar et al., 2010) to approximate both annotator error and bias (Ipeirotis et al., 2010), and the difficulty of particular labels and models (Sheng et al., 2008). While most of these models have been intended to be generalizable, this paper makes the argument that progress in Natural Language Understanding (NLU) requires attention to the domain-specific attributes of semantic data.

In any form of communication or usage of language, there are always two necessary elements: the form and the meaning. When the meaning is tightly bound to the form, one can take the form context-free and be able to extract the meaning directly. However, in natural language communication, it would be impossible to parse the intended meaning without some external knowledge base. The so-called symbol grounding problem Harnad (1999) states that one can not derive the meaning of a sentence from the syntax alone. Meaning is derived from many sources, the context, the tone of voice, the relationship between interlocutors, etc.

While the NLP community has made great strides developing a better ability to understand the syntactical distribution of a language, we have yet to make any clear headway in modeling meaning

(Bender and Koller, 2020). Although annotators may internally feel that they have an intuitive sense of semantic preservation, there does not seem to be a consistent agreement between people (and even for the same person in varying circumstances).

There are several basic challenges that cause such inconsistencies. Firts of all, the overlap between the form and semantics is very fuzzy, (Tikhonov and Yamshchikov, 2018; Tikhonov et al., 2019); for example, given a pair of sentences in which the only distinction is the sentiment (ex: "I love pizza." vs. "I hate pizza.") human annotators agree that semantics similarity is low while various NLP researchers treat sentiment as style attribute and evaluate these two sentences as semantically similar. Second, there are many possible axes upon which to calculate semantic similarity (communicative intent Westera and Boleda (2019), topic identification Peinelt et al. (2020), emotion recognition Franzoni et al. (2017)); it is not clear how these axes rank when we are after a general measure of semantic similarity. Finally, personal characteristics of the annotator such as implicit understanding of the context or varying background experience systematically affect the judgment of the annotators.

To see differences in the semantic tendencies of human annotation, we used several standard paraphrase and style transfer datasets alongside a random selection of sentence pairs from each dataset. Similar to Yamshchikov et al. (2021) the random pairs of sentences are used for the baseline of sentences that have no semantic overlap whatsoever. The paraphrase datasets include different versions of English Bibles Carlson et al. (2017), English Paralex dataset111http://knowitall.cs.washington.edu/paralex/, and English Paraphrase dataset222http://paraphrase.org. The style transfer datasets are the dataset of politeness introduced in Rao and Tetreault (2018) referred further as GYAFC, and Yelp! Reviews333https://www.yelp.com/dataset enhanced with human-written reviews with opposite sentiment provided by Tian et al. (2018).

Every pair of sentences was labeled by three independent annotators with a score from 1-5 (1 being dissimilar and 5 being identical). To facilitate further research of human-labeling inconsistencies for the tasks of semantic similarity, we make all collected information on the labeling process available444https://github.com/Hernanros/SOTA/tree/master/data.

There are three major sources of noise affecting this labeling procedure. The first source of noise are unreliable annotators. These are people who don’t give thoughtful responses and randomly fill their answers. Such annotators are present in all crowdsourcing tasks, and there are many methods to filter them out, for example, (Oleson et al., 2011; Lofi, 2013). The second source of noise is the 1-5 labeling scheme itself. On the one hand, the continuous scale from one to five presents the possibility for an annotator to mark a pair with 3 implying that two sentences are neither similar nor dissimilar. On the other hand, one could argue that by definition, the lack of similarity inherently equates to dissimilarity. The final source of noise could be certain personal qualities of the annotators. For example, certain users could be more radical in their judgment and have a preference to give extreme ratings (1,5) while others might be more moderate and give more centrist ratings (2,4), see (Panda et al., 2020).

We conducted experiments to estimate the impact of these sources of noise on evaluations of unsupervised semantic measures. Initially, we labored under the assumption of a minimal consistency requirement for a measure of semantic similarity, i.e. that random sentences be ranked less similar than non-random sentences on average. However, when trying to validate that assumption by analyzing the similarity score distributions relative to the labels for different measures, we discovered numerous examples of low-quality labels. As a result, we strove to formalize the patterns of noise into clear heuristics that can be applied to any dataset using the metadata available on a publicly available crowdsourcing platform.

It can be argued that the heuristics proposed below are generalizable to any form of human judgement, due to the inherent ambiguity within written language discussed prior. This is a legitimate claim, and as such gaining a clearer picture of the biases and noise in the data becomes even more crucial for NLP tasks that require any form of human quantitative estimates. The heuristics below are by no means an exhaustive list, but rather to be viewed as a sample of the myriad of factors that need to be addressed as we strive towards a more comprehensive formulation of semantic similarity.

We experimented with five different heuristics:

If the annotator corresponds to one of these categories we pronounce this annotator to be unreliable. To make our experiments clear and reproducible we publish the source code, with specification of all dependencies, including external libraries888https://github.com/Hernanros/SOTA.

To estimate how the labeling noise can interfere with the NLP benchmarks that use semantic similarity measurements we took ten of the most used metrics for content preservation and semantic similarity. Word overlap is calculated as percentage of words that occur in both texts. chrF Popović (2015)

is a character n-gram F-score that measures number of n-grams that coincide in input and output.

Cosine similarity is calculated in line with Fu et al. (2018) either with pre-trained GloVe Pennington et al. (2014) or FastText word embeddings Joulin et al. (2016). POS-distance looks for nouns in the input and output and is calculated as a pairwise distance between the embeddings of the found nouns. L2 distance between Elmo Peters et al. (2018) embeddings of two sentences. WMD Kusner et al. (2015) defines the distance between two documents as an optimal transport problem between the embedded words. BLEU Papineni et al. (2002) is one of the most commmon semantic similarity measures. ROUGE Lin and Hovy (2000) compares any text to any other (typically human-generated) summary using a recall-oriented approach and unigrams, with bi-grams, and Lin and Och (2004) with the longest co-occurring n-grams in sequence. Meteor Banerjee and Lavie (2005)

metric is based on a harmonic mean of unigram precision and recall, with recall, weighted higher than precision and some additional features, such as stemming and synonymy matching. Finally,

BERT score proposed in Zhang et al. (2019) is a BERT-based estimator of semantic similarity between two pieces of text.

Table 1 shows how the automated semantic similarity metrics correlate with human labels and how they correlate after we filter unreliable annotators defined according to the heuristics above999See Appendix for the resulting experiments with all five heuristics and relative changes in correlation between human labeling and unsupervised semantic similarity metrics depending on the filtering procedure. It also clearly demonstrates that relatively straight-forward filtering of human labels could add up to nine percentage points to the results of an automated evaluation. This in itself is disturbing, since such changes in performance are often regarded as an improvement in some NLP tasks.

In all our experiments situations we see that the combination of Low Variance and High Random filtering heuristics has the strongest impact on the correlation with automated evaluation methods. Under certain circumstances, heuristics based on Disagreeable Labelers and Sentimentally Dis-aligned Labelers also increase the correlation. On the other hand, filtering Slow Annotators out only hurts the performance.

Table 2 shows a more nuanced picture of correlations between the automated metrics and the labels of different annotators. We denote those annotators who selected {1,5} over 50% of the time as Radical and those who selected {2,4} as Centrist; the label 3 was ignored in calculations of these criteria, and only annotators with variance above 1 were included. Comparing results in Table 1 and Table 2 one could see that radical annotators play a major part in the resulting overall correlations between human labels and automated semantic similarity metrics. Moreover, filtering unreliable annotators only affects correlations of the labels given by Centrists. This either shows that treating semantic similarity as a binary value when using crowd-sourced human labels might be beneficial for less ambiguous results or hints that current unsupervised metrics of semantic similarity have hard time capturing nuance that some human annotators see.

This paper is an attempt to quantify the inherent ambiguity prevalent in any NLP task that relies on human judgment as a measure of semantic similarity. It demonstrates that a simple heuristic curation of human annotation could give up to 9 extra percentage points in terms of the model performance estimated with some unsupervised semantic similarity measure.

The series of experiments conducted in the paper provides several rules of thumb to reduce the ambiguity of human labels: (1) when labeling treat semantic similarity as a binary feature asking if two texts are similar or not, (2) add sentence pairs where there is no semantic similarity whatsoever and filter unreliable annotators that make mistakes on these pairs, (3) majority vote improves the consistency of your data but it is not as good, as filtering out annotators with label variance and annotators that systematically make mistakes with obviously dissimilar sentence pairs.