Deep convolutional semantic segmentation (DCSS) learning doesn't converge to an optimal local minimum with random parameters initializations; a pre-trained model on the same domain becomes necessary to achieve convergence.In this work, we propose a joint cooperative end-to-end learning method for DCSS. It addresses many drawbacks with existing deep semantic segmentation learning; the proposed approach simultaneously learn both segmentation and classification; taking away the essential need of the pre-trained model for learning convergence. We present an improved inception based architecture with partial attention gating (PAG) over encoder information. The PAG also adds to achieve faster convergence and better accuracy for segmentation task. We will show the effectiveness of this learning on a diabetic retinopathy classification and segmentation dataset. 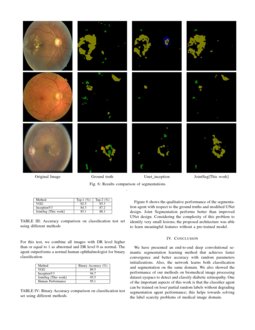 . Generally, it’s an encoder-decoder structure, one encoder to encode the features to lower dimensional features map and one decoder to remap the features map into several probabilistic maps (number of classes) of same width and height as input using bilinear interpolation or transposed convolutions

[5, 6]. End-to-end learning of the encoder-decoder model best achieved using a pre-trained classification model for the encoder on the same domain. However, for a simple problem with low spatial resolutions input size and fewer number of classes pre-trained model isn’t necessary, though it helps speed up the learning process. For complex problems with many numbers of classes and higher resolutions, learning step doesn’t converge to the best local optimum without a pre-trained model; leading to inferior validation mean IOU(mean pixel intersection over union). For problems with completely unrelated domain such as medical images, satellite images etc. segmentation becomes two unrelated step; first, define and train a classification model and then use the same for the encoder to train the encoder-decoder model. How do we simplify the segmentation learning for any domains and complexity? Can we formulate the two-step processes into one step; at the same time learning both steps? We can formulate this as high-level multi-tasks learning concept to train the segmentation system. The idea of pure multi-tasks learning deviates from the main principle behind the simplification to learn one task from the feedback of another task. Here in our case segmentation is dependent on the pre-trained model, achieved using the classification step, which is completely independent of segmentation. In general, all tasks of a usual multi-tasks learning model can be learned independently; but here segmentation can’t be learned independently. Another aspect of this attempt is that the classification step should be trainable on loose labels (Section II-C) of the dataset.

a. The scarcity of labeled segmentation data; this method can achieve better accuracy with the fewer number of segmentation ground-truths.

b. Eliminating the need for pre-trained model requirements for convergence.

d. Learning a classification model as by-product alongside.

Partial Attention: A partial attention mechanism to use the mid-level encoder layer features for decoder layers.

[6], a multilayer deconvolution and unpooling network were used to predict the segmentation masks. Segnet[15]

[12], they have used FCN to predict segmentation mask for each region of interest. Also several other recent methods such as PSPNet[10], RefineNet[3], ENet[11], Sharpmask[13]

etc. demonstrated the advantages of encoder-decoder model using convolution and transposed convolution for the task of semantic segmentation. In general, the predicted segmentation mask is coarse and requires post-processing to remove outliers. DenseCRF

[14] is one effective post-processing layer for semantic segmentation [17, 18, 19], it refines the segmentation masks exploiting the pixel-level pairwise closeness.

We formulate the segmentation learning as a cooperative learning problem, where two agents operate on two overlapping domains and interact with each other to achieve their respective goals. The terms overlapping domains implies that the datasets for classification and segmentation are sampled from the same distribution; it’s not necessary to have an identical sample for both agents. One agent learns to generate segmentation masks for images with the help of the agent responsible for classification. Even though the classifier agent is capable of self-learning, the interaction with the segmentation agent results in improved generalizability. Each of the agents shares a chunk of parameters but uses separate optimizers to learn their parameters. The shared parameters of the agents are learned by both of the agents at a different rate; this is where the agents share knowledge and learn cooperatively. Learning rate for classifier agent is higher than that of segmentation agent as it possesses class specific discriminative knowledge about the domain. Outputs of the two agents Eq 1 for some input x is calculated using the shared parameters M; ycommon denotes the output from the shared model part, yclf denotes the output of the classifier agent with private parameters C and yseg denotes the output of the segmentation agent with private parameters S.

Softmax cross-entropy cost Eq 2 was used to learn both agents. For the segmentation agent design and learning context, M is refereed as the encoder and S as the decoder. Fig 1 shows the interaction between the two agents; sharing a common set of parameters M.

, where an additional convolution was used before max-pooling to ensure rich feature representation. We have added a residual connection from the block input to output as shown in Fig

2. The concatenated features were convolved with another 3×3 convolution to reduce aliasing and added with 1×1 convolved input features; both operations have the same number of output filters. Apart from that, we have used a convolution factorization version Fig 3 of the same module for the classifier node. The idea of convolution factorization was proposed in [9], it reduces the number of parameters without effecting the generalization performance.

The encoder last layer output is used as the input of both the classifier and the segmentation agents. Classifier agent private node C is designed using the residual factorized inception block as shown in Fig 3, followed by a global pool layer and a fully connected layer with a number of classes for the classifier. For each spatial dimension level of the encoder and the classifier private node, multiples cascaded residual inception blocks were used. Fig 5 shows the complete design of the joint segmentation and classification learning.

The cooperative learning model can also be used when the number of labeled samples for the classifier agent is small. The classifier agent trained on partial random labels doesn’t downgrade the segmentation agent performance. When we use around 20% of labeled samples for classifier and around 80% samples with random labels accuracy of classifier agent are lowered without effecting the performance of the segmentation agent. This observation indicates the ability of both of the agents to learn cooperatively. Also, this helps towards the goal of training on a dataset with the very low number of labeled images; especially relevant on medical image domains.

Dataset: We train the classification agent on the Eyepacs diabetic retinopathy classification dataset [27] with 5 classes. The 5 classes of this dataset indicate DR severity level; level 0 for no DR, level 1 for mild DR, level 2 for moderate DR, level 3 for severe DR and 4 for proliferative DR. For training 25K images were used and validation performance was calculated on a set of 10k images. For testing, we have used 55K test set provided by eyepacs. The test set was labeled internally by ophthalmologists. Each image was resized to 224×224×3.

The segmentation agent is trained on a dataset prepared with the help of ophthalmologists; We selected a subset of around 5K images from Eyepacs dataset and annotated retinal pathological features with mask-based annotation. This dataset contains the annotation of around 5 pathological features (hard exudates, soft exudates, hemorrhage, microaneurysms, drusen) with one additional mask annotation for retinal artifacts. The set is split into training and validation set; 3.5K images for training and 1.5K images were used for validation.

is used as input. Extensive data augmentation is used such as random flip left/right, up/down and random padding was used for both classification and segmentation. Segmentation masks were also processed with same augmentation its corresponding image. Additionally, for classification additional augmentation such as for as changing the image pixel values randomly using hue, contrast and saturation were used. Also, each image is standardized by it’s mean and dividing its standard deviation.

Framework: We have used TEFLA[24]

, a python framework developed on the top of TENSORFLOW

[25], for all experiments described in this work.

Table I shows the mean-IOU comparisons with the proposed approach and the existing algorithms. A significant performance gain is obtained with join segmentation learning. Here fcn-8s and Unet models parameters were initialized with a pre-trained model; trained on eyepacs classification set.

If we randomly initialize the FCN-8s and UNet model parameters; results become non-informatory as shown in Table II; both FCN-8s and UNet could not achieve convergence to an optimal local minimum. From Table I and Table II we can understand the limitations and the importance of pre-trained model for traditional segmentation learning. But the joint learning achieves convergence to an optimal local minimum with random initializations.

Table IV shows the classifier agent performance on a binary classification scenario. For a DR screening system to understand whether a person has DR, a binary label is enough. For this test, we combine all images with DR level higher than or equal to 1 as abnormal and DR level 0 as normal. The agent outperforms a normal human ophthalmologist for binary classification.

Figure 6 shows the qualitative performance of the segmentation agent with respect to the ground truths and modified UNet design. Joint Segmentation performs better than improved UNet design. Considering the complexity of this problem to identify very small lesions; the proposed architecture was able to learn meaningful features without a pre-trained model.

We have presented an end-to-end deep convolutional semantic segmentation learning method that achieves faster convergence and better accuracy with random parameters initializations. Also, the network learns both classification and segmentation on the same domain. We also showed the performance of our methods on biomedical image processing dataset eyepacs to detect and classify diabetic retinopathy. One of the important aspects of this work is that the classifier agent can be trained on lose/ partial random labels without degrading segmentation agent performance; this helps towards solving the label scarcity problems of medical image domain.

We would like to thank the data team leads RajaRajalakshmi Kodhandapani and Ophthalmologists of Artelus; who have helped to prepare the segmentation dataset. Also, I would like to thank colleagues Anurag Sahay and Lalit Pant for their valuable advice during this work.