Resolution of The Linear-Bounded Automata Question 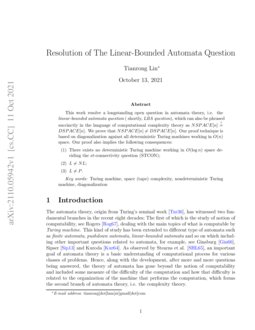 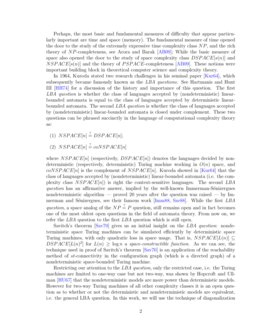 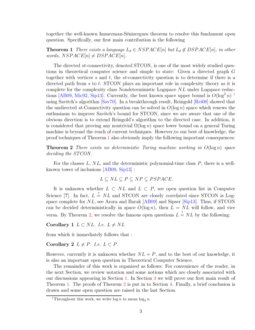 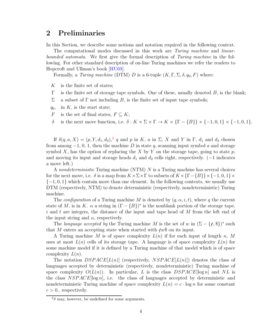 The automata theory, origin from Turing’s seminal work [Tur37], has witnessed two fundamental branches in the recent eight decades; The first of which is the study of notion of computability, see Rogers [Rog67], dealing with the main topics of what is computable by Turing machine. This kind of study has been extended to different type of automata such as finite automata, pushdown automata, linear-bounded automata and so on which including other important questions related to automata, for example, see Ginsburg [Gin66], Sipser [Sip13] and Kuroda [Kur64]. As observed by Stearns et al. [SHL65], an important goal of automata theory is a basic understanding of computational process for various classes of problems. Hence, along with the development, after more and more questions being answered, the theory of automata has gone beyond the notion of computability and included some measure of the difficulty of the computation and how that difficulty is related to the organization of the machine that performs the computation, which forms the second branch of automata theory, i.e. the complexity theory.

Perhaps, the most basic and fundamental measures of difficulty that appear particularly important are time and space (memory). The fundamental measure of time opened the door to the study of the extremely expressive time complexity class NP, and the rich theory of NP-completeness, see Arora and Barak [AB09]; While the basic measure of space also opened the door to the study of space complexity class DSPACE[s(n)] and NSPACE[s(n)] and the theory of PSPACE-completeness [AB09]. These notions were important building block in theoretical computer science and complexity theory.

where we will define the notation NSPACE[n] and DSPACE[n] in Section 2 and coNSPACE[n] is the complement of NSPACE[n]. Kuroda showed in [Kur64] that the class of languages accepted by (nondeterministic) linear-bounded automata (i.e. the complexity class NSPACE[n]) is right the context-sensitive languages. The second LBA question has an affirmative answer, implied by the well-known Immerman-Sénizergues nondeterministic algorithm — proved 20 years after the question was raised — by Immerman and Sénizergues, see their famous result [Imm88, Sze88]. While the first LBA question still remains open and in fact becomes one of the most oldest open questions in the field of automata theory. From now on, we refer the LBA question to the first LBA question which is still open.

The directed st-connectivity, denoted STCON, is one of the most widely studied questions in theoretical computer science and simple to state: Given a directed graph G together with vertices s and t, the st-connectivity question is to determine if there is a directed path from s to t. STCON plays an important role in complexity theory as it is complete for the complexity class Nondeterministic Logspace NL under Logspace reductions [AB09, Mic92, Sip13]. Currently, the best known space upper bound is O(log2n) 222 We write logn to mean log2n in this work. using Savitch’s algorithm [Sav70]. In a breakthrough result, Reingold [Rei08] showed that, by using some tools in [RVW02], the undirected st-Connectivity question can be solved in O(logn) space which renews the enthusiasm to improve Savitch’s bound for STCON, since we are aware that one of the obvious direction is to extend Reingold’s algorithm to the directed case. In addition, it is considered that proving any nontrivial Ω(logn) space lower bound on a general Turing machine is beyond the reach of current techniques. However,to our best of knowledge, the proof techniques of Theorem 1 also obviously imply the following important consequences:

There exists no deterministic Turing machine working in O(logn) space deciding the STCON.

For the classes L, NL, and the deterministic polynomial-time class P, there is a well-known tower of inclusions [AB09, Sip13] :

It is unknown whether L⊂NL and L⊂P, see open question list in Computer Science [A1]. In fact, L?=NL and STCON are closely correlated since STCON is Log-space complete for NL, see Arora and Barak [AB09] and Sipser [Sip13]. Thus, if STCON can be decided deterministically in space O(logn), then L=NL will follow, and vice versa. By Theorem 2, we resolve the famous open questions L?=NL by the following:

from which it immediately follows that :

However, currently it is unknown whether NL=P, and to the best of our knowledge, it is also an important open question in Theoretical Computer Science.

The remainder of this work is organized as follows: For convenience of the reader, in the next Section, we review notation and some notions which are closely associated with our discussions appearing in Section 1. In Section 3 we will prove our first main result of Theorem 1. The proofs of Theorem 2 is put in to Section 4. Finally, a brief conclusion is drawn and some open question are raised in the last Section.

In this Section, we describe some notions and notation required in the following context. Our style of writing after the previous Section is fully influenced by that in Aho, Hopcroft and Ullman’s book [HU69, AHU74, HU79].

The language accepted by the Turing machine M is the set of w in I∗ such that M enters an accepting state when started with w on its input.

(Space-Bounded Computation. [AB09]) Let S:N→N and L∈{0,1}∗. We say that L∈DSPACE[S(n)] (respective, L∈NSPACE[S(n)] if there is a constant c and deterministic (respectively, nondeterministic) Turing machine M deciding L such that on every input x∈{0,1}∗, the total number of tape-cells that M uses is at most c⋅S(|x|) for some constant c>0.

The original notion of a (nondeterministic) linear-bounded automaton is an on-line (nondeterministic) Turing machine with one-tape whose read/write head can not move beyond the left and right boundary symbols ⧸c and $, see Landweber [Lan63] and Kuroda [Kur64]. But in this work, we shall give another description in accord with the Turing machine stated above. They are essentially the same in nature:

The following Lemmas are important premise tools for our work whose proofs are omitted here :

Other background information and notions will be given along the way in proving our main results stated in Section 1.

To obtain the result of Theorem 1 we need to enumerate the deterministic Turing machines, that is, assign an ordering to DTMs so that for each nonnegative integer i there is a unique DTM associated with i.

We next use the method presented in [AHU74], p. 407, to encode a deterministic Turing machine into an integer.

Without loss of generality, see [AHU74], we can make the following assumptions about the representation of a single-tape deterministic Turing machine :

We can now design a four-tape NTM M which treats its input string xi both as an encoding of a single-tape DTM Mi and also as the input to Mi. One of the capabilities possessed by M is the ability to simulate a Turing machine, given its specification. We shall have M determine whether the Turing machine Mi accepts the input xi without using more than S(|xi|) tape-cells for some function S. If Mi accepts xi in space S(|xi|), then M does not. Otherwise, M accepts xi. Thus, for all i, either M disagrees with the behavior of the ith DTM on that input xi which is the binary representation of i, or the ith DTM uses more than S(|xi|) tape-cells on input xi. We first show the following more general theorem comparing to Theorem 1:

Let S(n)≥logn be a space-constructible function. Then there exists a language Ld accepted by a NTM by using space O(S(n)) but by no DTM of space complexity S(n). That is, Ld∈NSPACE[S(n)] but Ld∉DSPACE[S(n)].

Proof. Let M be a four-tape NTM which operates as follows on an input string x of length of n.

Suppose now Ld were accepted by some DTM Mj of space complexity S(n). By Lemma 1 we may assume that Mj is a single-tape Turing machine. Let Mj have s states and t tape symbols. Since ˆMj 555 ˆMj denotes the set of binary strings which encodes DTM Mj. We know that by stringing together the quintuples of Mj, and we may prefix 1’s at will to find larger and larger integers representing the same set of quintuples of the same DTM Mj, thus there are infinitely binary strings of sufficiently long which represents Mj. appears infinitely often in the enumeration, and

which implies that for a sufficiently long w, say |w|≥N0, and Mw denoted by such w is Mj, we have that

Thus, on input w, M has sufficient space 666 By our construction of M, M requires max{(1+⌈logt⌉)S(n),⌈logs⌉+⌈logS(n)⌉+⌈logt⌉S(n)} space to simulate Mw. to simulate Mw and accepts if and only if Mw rejects 777 The simulating by an universal nondeterministic Turing machine is using only a constant factor of space overhead, see [AB09], p. 83. But we did not find its formal proof in [AB09] or elsewhere.. But we assumed that Mj accepted Ld, i.e. Mj agreed with M on all inputs. We thus conclude that Mj does not exist, i.e. Ld∉DSPACE[S(n)].

We thus conclude that

Now the Theorem 1 is a special case when making S(n)=cn for some constant c>0.

Proof of Theorem 1. Making S(n)=cn for some constant c>0 and repeating the proving process of Theorem 3. □

At this point, the proof of Theorem 2 can be made naturally by a contradiction to Theorem 1.

Proof of Theorem 2. If STCON has deterministic algorithms with space complexity O(logn), we can use it in Savitch’s algorithm [Sav70] to deterministically simulate an NTM, which further implies that NSPACE[n]=DSPACE[n], a contradiction to Theorem 1.

Proof of Corollary 1. Since STCON is ≤log–complete for the complexity class NL (See complexity book by Arora and Barak [AB09] and Michel’s book [Mic92]), we know that L=NL if and only if STCON ∈L, i.e. there is a deterministic algorithm deciding STCON in space O(logn).

In fact, the later proof of Theorem 2 already implies that L≠NL □

As two special cases of our result, the STCON has been resolved. That is there exists deterministic Turing machine working in O(logn) deciding the st-connectivity question where n is the number of vertices of directed graph in question, and L≠NL, which also resolves a famous open question from Theoretical Computer Science, see [A1], from which it follows that L≠P.

Finally, there are many important questions in Computer Science we did not touch in this work, see [A1].