Recent studies exploited external periodic synchronous signals to synchronize a pair of network nodes to address a threat of delaying the communications between the nodes. However, the sensing-based synchronization may yield faults due to nonmalicious signal and sensor noises. This paper considers a system of N nodes that will fuse their peer-to-peer synchronization results to correct the faults. Our analysis gives the lower bound of the number of faults that the system can tolerate when N is up to 12. If the number of faults is no greater than the lower bound, the faults can be identified and corrected. We also prove that the system cannot tolerate more than N-2 faults. Our results can guide the design of resilient sensing-based clock synchronization systems. 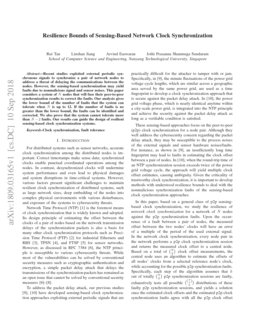 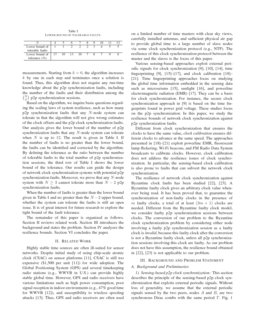 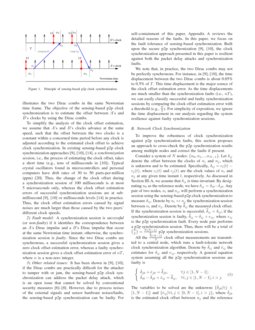 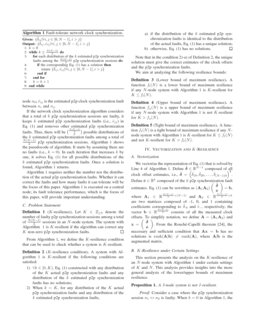 For distributed systems such as sensor networks, accurate clock synchronization among the distributed nodes is important. Correct timestamps make sense data; synchronized clocks enable punctual coordinated operations among the nodes. In contrast, desynchronized clocks will undermine system performance and even lead to physical damages and system disruptions in time-critical systems. However, various factors present significant challenges to maintain resilient clock synchronization of distributed systems, such as large network sizes, deep embedding of the nodes into complex physical environments with various disturbances, and exposure of the systems to cybersecurity threats.

[2] for industrial Ethernets and RBS [3], TPSN [4], and FTSP [5] for sensor networks. However, as discussed in RFC 7384 [6], the NTP principle is susceptible to various cybersecurity threats. While most of the vulnerabilities can be solved by conventional security measures such as cryptographic authentication and encryption, a simple packet delay attack that delays the transmissions of the synchronization packets has remained as an open issue that cannot be solved by conventional security measures [6, 7, 8].

To address the packet delay attack, our previous studies [9, 10] have developed sensing-based clock synchronization approaches exploiting external periodic signals that are practically difficult for the attacker to tamper with or jam. Specifically, in [9], the minute fluctuations of the power grid voltage cycle lengths, which are similar across a geographic area served by the same power grid, are used as a time fingerprint to develop a clock synchronization approach that is secure against the packet delay attack. In [10], the power grid voltage phase, which is nearly identical anytime within a city-scale power grid, is integrated into the NTP principle and achieve the security against the packet delay attack as long as a verifiable condition is satisfied.

These sensing-based approaches focus on the peer-to-peer (p2p) clock synchronization for a node pair. Although they well address the cybersecurity concern regarding the packet delay attack, they may be susceptible to the process noises of the external signals and sensor hardware noises/faults. For instance, as shown in [9], an insufficiently long time fingerprint may lead to faults in estimating the clock offset between a pair of nodes. In [10], when the round-trip time of an NTP synchronization session exceeds twice of the power grid voltage cycle, the approach will yield multiple clock offset estimates, causing ambiguity. Given the criticality of trustworthy clock synchronization, it is important to develop methods with understood resilience bounds to deal with the nonmalicious synchronization faults of the sensing-based clock synchronization approaches.

When the number of faults is greater than the lower bound given in Table I and no greater than the N−2 upper bound, whether the system can tolerate the faults is still an open issue. It is of great interest for future research to explore the tight bound of the fault tolerance.

Highly stable time sources are often ill-suited for sensor networks. Despite initial study of using chip-scale atomic clock (CSAC) on sensor platforms [11], CSAC is still too expensive ($1,500 per unit [11]) for wide adoption. The Global Positioning System (GPS) and several timekeeping radio stations (e.g., WWVB in U.S.) can provide highly stable global time. However, GPS and radio receivers have various limitations such as high power consumption, poor signal reception in indoor environments (e.g., 47% good time for WWVB [12]), and susceptibility to wireless spoofing attacks [13]. Thus, GPS and radio receivers are often used on a limited number of time masters with clear sky views, carefully installed antennas, and sufficient physical air gap to provide global time to a large number of slave nodes via some clock synchronization protocol (e.g., NTP). The resilience of this clock synchronization protocol between the master and the slaves is the focus of this paper.

This section describes the principle of the sensing-based p2p clock synchronization that exploits external periodic signals. Without loss of generality, we assume that the external periodic signals sensed by the two peers, nodes A and B, are two synchronous Dirac combs with the same period T. Fig. 1 illustrates the two Dirac combs in the same Newtonian time frame. The objective of the sensing-based p2p clock synchronization is to estimate the offset between A’s and B’s clocks by using the Dirac combs.

), we can easily classify successful and faulty synchronization sessions by comparing the clock offset estimation error with a threshold (e.g.,

T2). For simplicity of exposition, we ignore the time displacement in our analysis regarding the system resilience against faulty synchronization sessions.

All the N(N−1)2 clock offset measurements are transmitted to a central node, which runs a fault-tolerate network clock synchronization algorithm. Denote by ^δij and ^eij the estimates for δij and eij, respectively. A general equation system assuming all the p2p synchronization sessions are faulty is

The variables to be solved are the unknowns {^δj0|∀j∈[1,N−1]} and {^eij|∀i,j∈[0,N−1],i>j}, where ^δj0 is the estimated clock offset between nj and the reference node n0; ^eij is the estimated p2p clock synchronization fault between ni and nj.

From Algorithm 1, we define the K-resilience condition that can be used to check whether a system is K-resilient.

A system with Algorithm 1 is K-resilient if the following conditions are satisfied:

Note that in the condition 2)-a) of Definition 2, the unique solution must give the correct estimates of the clock offsets and the p2p synchronization faults.

We aim at analyzing the following resilience bounds:

A function fl(N) is a lower bound of maximum resilience if any N-node system with Algorithm 1 is K-resilient for K≤fl(N).

A function fu(N) is a upper bound of maximum resilience if any N-node system with Algorithm 1 is not K-resilient for K>fu(N).

We vectorize the representation of Eq. (

This section presents the analysis on the K-resilience of an N-node system with Algorithm 1 under certain settings of K and N. This analysis provides insights into the more general analysis of the lower/upper bounds of maximum resilience.

A 3-node system is not 1-resilient.

Consider a case where the p2p synchronization session n1↔n2 is faulty. When k=0 in Algorithm 1, the vectorized equation system in Eq. (1) is

Note that A2 and ^e are empty. With e21≠0, Gaussian elimination shows that rank(A|b)≠rank(A). Thus, the equation system has no solutions and Algorithm 1 will move on to the case of k=1. The algorithm will attempt to test all the N(N−1)2=3 possible cases of a single faulty p2p synchronization session. For instance, when the algorithm assumes that n0↔n1 is faulty, the equation system is

A 4-node system is 1-resilient.

We provide a sketch of the proof as follows instead of the complete proof due to space limit. Consider a case where the p2p synchronization session n0↔n2 is faulty. When k=0 in Algorithm 1, similar to Proposition 1, the equation system has no solutions and Algorithm 1 will move on to the case of k=1. The algorithm will test all the N(N−1)2=6 possible cases of a single faulty p2p synchronization session. For instance, when the algorithm assumes n0↔n1 is faulty, the vectorized equation system is

As rank(A|b)≠rank(A), the equation system has no solutions. An exhaustive check shows that, only when the algorithm assumes the synchronization session between n0 and n2 is faulty, the equation system has a unique solution (i.e., rank(A|b)=rank(A) and A has full column rank). Thus, the algorithm can correct the fault. In fact, it can be verified that, for the 4-node system, no matter which p2p synchronization session is faulty, the algorithm can correct the fault. Therefore, the 4-node system is 1-resilient.

A 4-node system is not 2-resilient.

Consider the 4-node system with two faulty p2p synchronization sessions: n0↔n1 and n0↔n2. When k=0, the equation system has no solutions. When k=1, consider a case where n0↔n3 is assumed to be faulty by the algorithm. The vectorized equation system is

To gain more insights, we also analyze a case of k=2 with n0↔n1 and n0↔n3 assumed to be faulty by the algorithm. The vectorized equation system is

A 5-node system is 1-resilient.

A 5-node system is not 2-resilient.

In Section IV-B, we adopt an approach of enumerating counterexamples to prove that a system is not K-resilient. As shown in the proofs of Propositions 3 and 5, if the actual faults satisfy certain conditions, the rank of A|b may change, presenting a pitfall to the approach of enumerating counterexamples. This motivates us to consider the actual faults as the variables of the equation system in Eq. (1). The following re-vectorization will be used in Section V-A to derive the lower bound of maximum resilience.

By defining a vector e∈RK composed of the K actual p2p synchronization faults, we can reformat Ax=b to include the actual faults into the vector of unknowns:

The re-vectorization of the equation systems in Eqs. (2), (3), and (4) are respectively given by

From the above examples, we can see that the solution to re-vectorization captures the condition that the actual faults need to satisfy such that the Ax=b will give wrong solutions.

In this section, we first develop two lemmas, Lemma 1 and Lemma 2. The proof of Lemma 2 uses Lemma 1. Then, we prove Proposition 6 using Lemma 2. Proposition 6 gives a sufficient condition that a system is K-resilient. This condition can be used to compute the lower bound of maximum resilience for any N-node system.

A′x′=b′ always has one or more solutions. When A′ has full column rank, the original Ax=b either has no solutions or has a unique correct solution.

When rank(A′)=N−1+k+K−l, where l∈[0,k] is the number of correctly positioned estimated p2p synchronization faults, the original Ax=b either has no solutions or has a unique correct solution.

When l=0, the given condition rank(A′)=N−1+k+K−l ensures that A′ has full column rank. From Lemma 1, Ax=b has either no solutions or a unique correct solution.

Based on Lemma 2, the following proposition can be used to compute the lower bound of maximum resilience.

As rank(A′)=N−1+k+K−l, from Lemma 1, the original Ax=b either has no solutions or has a unique correct solution. We now analyze the cases considered in Definition 2:

In summary, rank(A′)=N−1+k+K−l ensures that the K-resilience condition is satisfied. ∎

Based on Proposition 6, Algorithm 2 computes a lower bound of maximum resilience for any N-node system. Specifically, by starting with no synchronization faults (i.e., K=0), it increases K by one in each step of the outer loop to check whether the N-node system is K-resilient. The condition of K≤(N−2) in Line 2 is from Proposition 7 that the system is not K-resilient if K>(N−2). The loops from Line 3 to Line 6 will generate all possible combinations of the distributions of actual and estimated synchronization faults. In Line 8, we check whether the sufficient condition in Proposition 6 is met. If not, the current value of K has already exceeded the lower bound of maximum resilience. Thus, the algorithm returns K−1 as the lower bound.

The matrix A of the vectorized equation system is given by Eq. (10). We add labels to help understanding each column’s corresponding unknown to be solved and each row’s corresponding p2p synchronization session. In the first column of A that corresponds to the clock offset estimate ^δ10, the first element and the last N−2 elements that correspond to all p2p synchronization sessions involving n1 are non-zeros; all other elements are zero. This column is a linear combination of the columns corresponding to ^e10,^e12,…,^e1(N−1). Thus, A is not full column ranked. Therefore, the equation system Ax=b have an infinite number of solutions, which violates the resilience condition. ∎

It is interesting to study the following issues not addressed in this paper: