We study a posteriori error analysis of linear-quadratic boundary control problems under bilateral box constraints on the control which acts through a Neumann type boundary condition. We adopt the hybridizable discontinuous Galerkin method as discretization technique, and the flux variables, the scalar variables and the boundary trace variables are all approximated by polynomials of degree k. As for the control variable, it is discretized by the variational discretization concept. Then an efficient and reliable a posteriori error estimator is introduced, and we prove that the error estimator provides an upper bound and a lower bound for the error. Finally, numerical results are presented to illustrate the performance of the obtained a posteriori error estimator. 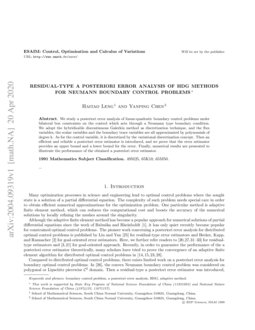 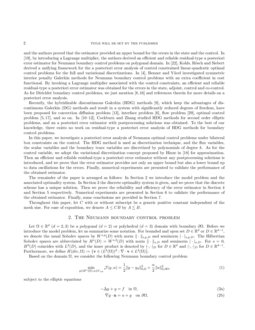 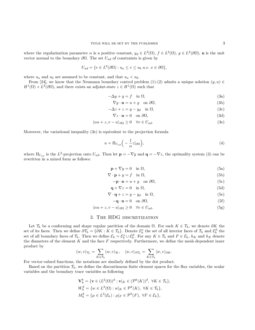 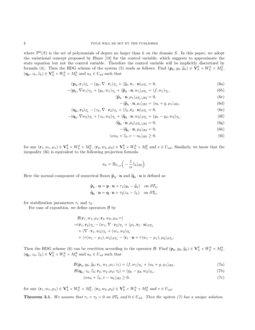 We present a priori and a posteriori error analysis of a high order hybr...
Nestor Sánchez, et al. ∙

This paper is concerned with the recovery of (approximate) solutions to ...
Wolfgang Dahmen, et al. ∙

Many optimization processes in science and engineering lead to optimal control problems where the sought state is a solution of a partial differential equation. The complexity of such problem needs special care in order to obtain efficient numerical approximations for the optimization problem. One particular method is adaptive finite element method, which can reduces the computational cost and boosts the accuracy of the numerical solutions by locally refining the meshes around the singularity.

Although the adaptive finite element method has become a popular approach for numerical solutions of partial differential equations since the work of Babuška and Rheinboldt [1], it has only quiet recently become popular for constrained optimal control problems. The pioneer work concerning a posteriori error analysis for distributed optimal control problems is published by Liu and Yan [25] for residual-type error estimators and Becker, Kapp, and Rannacher [2] for goal-oriented error estimators. Here, we further refer readers to [20, 27, 31, 32, 33] for residual-type estimators and [3, 21] for goal-oriented approach. Recently, in order to guarantee the performance of the a posteriori error estimator theoretically, many scholars have tried to prove the convergence of an adaptive finite element algorithm for distributed optimal control problems in [14, 15, 23, 28].

, which keep the advantages of discontinuous Galerkin (DG) methods and result in a system with significantly reduced degrees of freedom, have been proposed for convection diffusion problem

[13], interface problem [6], flow problem[29], optimal control problem [5, 17], and so on. In [10, 11, 12], Cockburn and Zhang studied HDG methods for second order elliptic problems, and an a posteriori error estimator with postprocessing solutions was obtained. To the best of our knowledge, there exists no work on residual-type a posteriori error analysis of HDG methods for boundary control problems.

In this paper, we investigate a posteriori error analysis of Neumann optimal control problems under bilateral box constraints on the control. The HDG method is used as discretization technique, and the flux variables, the scalar variables and the boundary trace variables are discretized by polynomials of degree k. As for the control variable, we adopt the variational discretization concept proposed by Hinze in [18] for approximation. Then an efficient and reliable residual-type a posteriori error estimator without any postprocessing solutions is introduced, and we prove that the error estimator provides not only an upper bound but also a lower bound up to data oscillations for the errors. Finally, numerical experiments are presented to validate the performance of the obtained estimator.

The remainder of the paper is arranged as follows: In Section 2 we introduce the model problem and the associated optimality system. In Section 3 the discrete optimality system is given, and we prove that the discrete scheme has a unique solution. Then we prove the reliability and efficiency of the error estimator in Section 4 and Section 5 respectively. Numerical experiments are presented in Section 6 to validate the performance of the obtained estimator. Finally, some conclusions are provided in Section 7.

Throughout this paper, let C with or without subscript be a generic positive constant independent of the mesh size. For ease of exposition, we denote A≤CB by A≲B.

Based on the domain Ω, we consider the following Neumann boundary control problem

subject to the elliptic equations

is the unit vector normal to the boundary

∂Ω. The set Uad of constraints is given by

where ua and ub are assumed to be constant, and that ua<ub.

Moreover, the variational inequality (3e) is equivalent to the projection formula

where ΠUad is the L2-projection onto Uad. Then let p=−∇y and q=−∇z, the optimality system (3) can be rewritten in a mixed form as follows:

For vector-valued functions, the notations are similarly defined by the dot product.

Based on the partition Th, we define the discontinuous finite element spaces for the flux variables, the scalar variables and the boundary trace variables as following

for any (r1,w1,μ1)∈Vkh×Wkh×Mkh, (r2,w2,μ2)∈Vkh×Wkh×Mkh and v∈Uad. Similarly, we know that the inequality (6i) is equivalent to the following projection formula

for stabilization parameters τ1 and τ2.

For ease of exposition, we define operators B by

Then the HDG scheme (6) can be rewritten according to the operator B: Find (ph,yh,ˆyh)∈Vkh×Wkh×Mkh, (qh,zh,ˆzh)∈Vkh×Wkh×Mkh and uh∈Uad such that

4. The residual-type a posteriori error estimator

Before we start to prove a posteriori error estimator for the model problem, we first provide some auxiliary results that will play an important role in the proof.

For each element K∈Th and face F∈Eh, we denote Πoj and Π∂j the L2-projections onto Pj(K) and Pj(F) for the nonnegative integer j. Then, from [6] we have the following error estimates

We conclude this subsection by introducing a lemma that has been proved in [7].

4.2. Reliability of the error estimator

Next, we consider the following auxiliary problem: Find p(uh),q(uh)∈H(div,Ω) and y(uh),z(uh)∈H1(Ω) such that

Now we are ready to prove a posteriori error estimators for ∥ph−p(uh)∥0,Ω+∥yh−y(uh)∥0,Ω and ∥qh−q(uh)∥0,Ω+∥zh−z(uh)∥0,Ω.

According to the definition of the operator B to infer that

for any (r,w,μ)∈Vkh×Wkh×Mkh. Then from the above equality and the definition of the operator B, we have