Shape illustration images (SIIs) are common and important in describing the cross-sections of industrial products. Same as MNIST, the handwritten digit images, SIIs are gray or binary and containing shapes that are surrounded by large areas of blanks. In this work, Residual-Recursion Autoencoder (RRAE) has been proposed to extract low-dimensional features from SIIs while maintaining reconstruction accuracy as high as possible. RRAE will try to reconstruct the original image several times and recursively fill the latest residual image to the reserved channel of the encoder's input before the next trial of reconstruction. As a kind of neural network training framework, RRAE can wrap over other autoencoders and increase their performance. From experiment results, the reconstruction loss is decreased by 86.47 autoencoder with high-resolution SIIs, 10.77 8.06 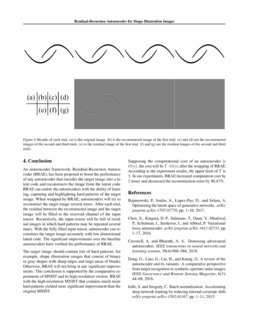 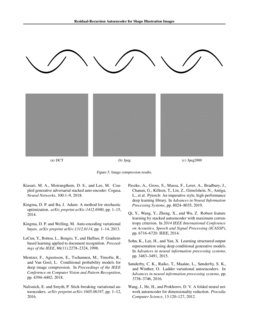 In this work, we propose a two-stage autoencoder based compressor-decomp...
Dipti Mishra, et al. ∙

On the Compressive Power of Boolean Threshold Autoencoders

An autoencoder is a layered neural network whose structure can be viewed...
Avraham A. Melkman, et al. ∙

Recently, (Zhou et al., 2018) proposed a method for computer-aided design (CAD) which can find efficient and innovative CAD models automatically. The method will first describe the target product by a shape illustration image (SII), Figure 1 for example; second compress the SII to get a low dimensional latent code z; third modify z by a random searching algorithm to get a new latent code znew; fourth reconstruct a new SII from znew and test its performance by a computer-aided engineering software. A highly efficient SII will be found automatically by replacing z with znew and doing the third and the fourth steps repeatedly. The image encoding and decoding techniques are the bottlenecks of the CAD method. A high compression rate can get low dimensional z that will lead to shorter optimization periods. But current encoding techniques are all sacrificing details to get a high compression rate which is unacceptable to SIIs whose details are highly correlated to their performance.

Because SIIs are usually generated by following predefined principals, they are similar to each other even though they are containing sharp edges and/or lots of small shapes. It is possible to learn the principals by deep learning-based autoencoders and express them with low dimensional features. Most autoencoders (Chen et al., 2016; Nalisnick and Smyth, 2016; Xu et al., 2019; Qi et al., 2014; Dong et al., 2018; Bojanowski et al., 2017; Sønderby et al., 2016; Wang et al., 2012; Creswell and Bharath, 2018; Kiasari et al., 2018; Wang et al., 2016) are using the traditional structure where images are encoded into low dimensional features and then decoded into the reconstructed images. When dealing with SIIs, the traditional autoencoders are shot-handed because of the lack of mechanics to emphasize hard patterns. The hard patterns are part of details that distinguish an SII from the others and are difficult to be captured by autoencoders. (Zhao and Li, 2018) proposed to learn features with image pyramids generated by smoothing and down-sampling operations. Although image pyramids can highlight details, the details are found by non-trainable operations that are not necessarily capable of identifying the hard patterns.

can be any structure that takes a tensor as input and outputs a reconstructed one. The loss function

l(.) consists of loss functions that are required by f(.). For example, l(.) can be l(x,y,z)=∥x−y∥+∥z∥ where x is the input image, y is the reconstructed image and z is the latent code. Minimizing l(x,y,z) will minimize reconstruction error and impose the sparsity of the latent code. There is no limitation on the optimization function o(.) as long as it can work with f(.) and optimize its weights θ. The residual function re(.) is used to get the residual. For example, re(x,y)=(x−y)/2. Supposing T=3, Figure 2 shows an example.

All experiments have run on 1080ti GPU and Pytorch

MNIST (LeCun et al., 1998) is a handwritten digital dataset in which 60000 images for training and 10000 for testing. Images of MNIST are similar to SIIs except the resolution is much lower than SIIs’. In this experiment, code from Github 111https://github.com/timbmg/VAE-CVAE-MNIST has been modified to run RRAE on MNIST with Variational Autoencoder (VAE) (Kingma and Welling, 2013) and Conditional Variational Autoencoder (CVAE) (Sohn et al., 2015) as the autoencoder f(.)

respectively whose networks are consisted of Linear and ReLU layers. The encoding and decoding part is wrapped by RRAE where the autoencoder will try reconstruct the image

zlnσ2 and the latent code zT of the last trial. Before every trial, the latest residual will be filled to xt where re(x,yt−1)=(x−yt−1)/2 which also is the default residual function of all experiments in this work 222Please refer to the uploaded code in VAE-CVAE folder for implementation details.. According to the code, the loss function is l(x,yT,zμ,zlnσ2)=BCE(x,yT)+KLD(zμ,zlnσ2), where BCE(.) and KLD(.) are Binary Cross Entropy (equation (1)) and KL divergence (equation (2)). ∑ and other operations are all pixel- or element-wise. The results are listed in Table 1 where total epoch number is 300, learning rate is 0.001 without weight decay, the optimization function o(.) is Adam (Kingma and Ba, 2014), the first column is the dimension of the latent code z, the second column is the total trial times T, the MSE column is the best testing mean square error between original image and reconstructed image during training, the DR column is the decrease rate of MSE respecting to the baseline (the T=1 result). From Table 1, it is obvious that the RRAE helps a lot in decreasing reconstruction error without increasing the dimension of the latent code. Usually, bigger T leads to better performance. But too many trials will consume too much computation with little improvements. So, in the following experiments, the upper limit of T is 3.

Convolutional autoencoders have been tested on MNIST and its high-resolution version 333Please refer to code in folder CNN for implementation details.. The autoencoders are piled up by layers of 2D convolution, Group Normalization (Wu and He, 2018)

and ReLU without skipping links. The high-resolution MNIST is a 512x512 binary image dataset that is generated by bilinear interpolation in which 60000 images for trianing and 10000 for testing. The images are binarized with threshold 127.5. All images are mean and std normalized. The loss function

A convolutional autoencoder that wrapped by RRAE is used to encode the cross-sectional images 555Please refer to code in folder CNN for implementation details.

. The autoencoder is piled up by layers of 2D convolution, batch normalization

(Ioffe and Szegedy, 2015) and ReLU without skipping links. The input cross-sectional image is mean and std normalized. The output of the last transposed convolution layer is denormalized to get the reconstructed image. The reconstructed image and the original cross-sectional image are used to calculate the residual image and the NMS(.) loss. Table 3 shows the results of the cross-sectional autoencoding experiment in which the best test results have been listed. From the results, RRAE has improved the reconstruction accuracy significantly. When the latent code dimension is low, 2 for example in this experiment, too many trials (e.g. T=3) will harm the performance of RRAE. The performance decreasing can also be observed in Table 2. Figure 4 shows the results of each trial that are from one test run of the z=5 & T=3 experiment. The reconstructed images are clamped to the range from 0 to 1. To illustrate the residual images, they are added by the bias 0.5 to keep the pixel value in the range from 0 to 1. From Figure 4, it is obvious that the residual gets smaller after each trial. The final reconstructed image (t=T) is very close to the original image which has been encoded into just 5 float variables.

The L1 loss of the final reconstructed image is 0.0020 in Figure 4. Figure 5 shows the results of different image compression algorithm with the same original image. The DCT method is same as the one introduced in (Zhou et al., 2018) where a image will be encoded into latent codes by 2D discrete cosine transformation and Zigzag reordering 666Please refer to code in folder DCT for implementation details.. Jpeg and Jpeg2000 are provided by MATLAB2014a. The DCT method needs 119157 double variables to reconstruct the image with L1 loss 0.0020. Jpeg has the loss 0.0024 with file size 5177 bytes. Jpeg2000 has the loss 0.0021 with file size 3333 bytes. Although L1 losses are close to each other, the code length of image compression methods are much longer than RRAE. From the residual images of Figure 5, there are obvious noises in the reconstructed images. Comparing to Figure 5, the final reconstructed image in Figure 4 has smoother and cleaner edges that are important in describing CAD shapes.

The target image should contain lots of hard patterns, for example, shape illustration images that consist of binary or gray shapes with sharp edges and large areas of blanks. Otherwise, RRAE will not bring in any significant improvements. This conclusion is supported by the comparative experiments of MNIST and its high-resolution version. RRAE with the high-resolution MNIST that contains much more hard patterns yielded more significant improvement than the original MNIST.

Supposing the computational cost of an autoencoder is O(n), the cost will be T⋅O(n) after the wrapping of RRAE. According to the experiment results, the upper limit of T is 3. In our experiments, RRAE increased computation cost by 2 times and decreased the reconstruction error by 86.47%.