Subspace clustering aims to cluster unlabeled data that lies in a union of low-dimensional linear subspaces. Deep subspace clustering approaches based on auto-encoders have become very popular to solve subspace clustering problems. However, the training of current deep methods converges slowly, which is much less efficient than traditional approaches. We propose a Residual Encoder-Decoder network for deep Subspace Clustering (RED-SC), which symmetrically links convolutional and deconvolutional layers with skip-layer connections, with which the training converges much faster. We use a self-expressive layer to generate more accurate linear representation coefficients through different latent representations from multiple latent spaces. Experiments show the superiority of RED-SC in training efficiency and clustering accuracy. Moreover, we are the first one to apply residual encoder-decoder on unsupervised learning tasks. 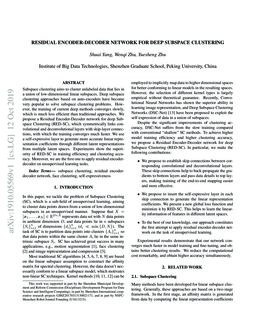 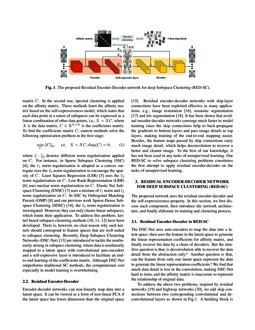 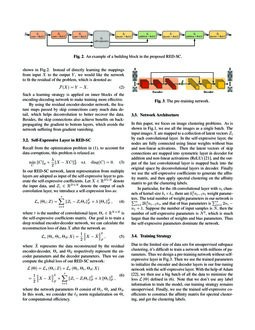 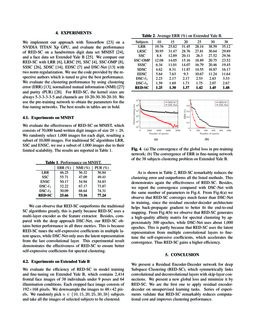 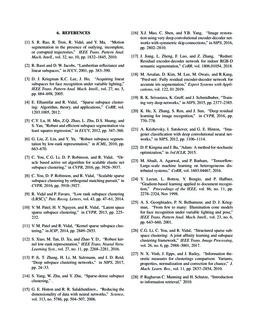 In this work, we propose a novel convolutional autoencoder based archite...
Krishan Sharma, et al. ∙

We propose a neural network for unsupervised anomaly detection with a no...
Chieh-Hsin Lai, et al. ∙

In this paper, we tackle the problem of Subspace Clustering (SC), which is a sub-field of unsupervised learning, aiming to cluster data points drawn from a union of low-dimensional subspaces in an unsupervised manner. Suppose that X=[x1,…,xN]∈RD×N represents data set with N data points in ambient dimension D, and data points lie in n subspaces {Si}ni=1 of dimensions {di}ni=1 (di≪min{D,N}). The task of SC is to partition data points into clusters {Ai}ni=1 so that data points within the same cluster Ai lie in the same intrinsic subspace Si. SC has achieved great success in many applications, e.g., motion segmentation [1], face clustering [2] and image representation and compression [3].

are based on the linear subspace assumption to construct the affinity matrix for spectral clustering. However, the data doesn’t necessarily conform to a linear subspace model, which motivates non-linear SC techniques. Kernel methods

can be employed to implicitly map data to higher dimensional spaces for better conforming to linear models in the resulting spaces. However, the selection of different kernel types is largely empirical without theoretical guarantee. Recently, Convolutional Neural Networks has shown the superior ability in learning image representation, and Deep Subspace Clustering Networks (DSC-Net)

[13] have been proposed to exploit the self-expression of data in a union of subspaces.

Experimental results demonstrate that our network converges much faster in model training and fine-tuning, and obtains better clustering results. We reduce the computational cost remarkably, and obtain higher accuracy simultaneously.

Many methods have been developed for linear subspace clustering. Generally, these approaches are based on a two-stage framework. In the first stage, an affinity matrix is generated from data by computing the linear representation coefficients matrix C. In the second one, spectral clustering is applied on the affinity matrix. These methods learn the affinity matrix based on the self-expressiveness model, which states that each data point in a union of subspaces can be expressed as a linear combination of other data points, i.e., X=XC, where X is the data matrix, C∈RN×N is the coefficients matrix. To find the coefficients matrix C, current methods solve the following optimization problem in the first stage:

Encoder-decoder networks can non-linearly map data into a latent space. It can be viewed as a form of non-linear PCA if the latent space has lower dimension than the original space [15]. Residual encoder-decoder networks with skip-layer connections have been exploited effective in many applications, e.g., image restoration [16], semantic segmentation [17] and iris segmentation [18]. It has been shown that residual encoder-decoder networks converge much faster in model training since the skip connections help to back-propagate the gradients to bottom layers and pass image details to top layers, making training of the end-to-end mapping easier. Besides, the feature maps passed by skip connections carry much image detail, which helps deconvolution to recover a better and cleaner image. To the best of our knowledge, it has not been used in any tasks of unsupervised learning. Our RED-SC to solve subspace clustering problems constitutes the first attempt to apply residual encoder-decoder on the tasks of unsupervised learning.

The proposed network uses the residual encoder-decoder and the self-expressiveness property. In this section, we first discuss each component, then introduce the network architecture, and finally elaborate its training and clustering process.

The DSC-Net uses auto-encoders to map the data into a latent space, then uses the feature in the latent space to generate the linear representation coefficients for affinity matrix, and finally recover the data by a chain of decoders. But the intuitive question is that, is deconvolution able to recover the data detail from the abstraction only? Another question is that, can the feature from only one latent space represent the data to generate the linear representation coefficients? We find that much data detail is lost in the convolution, making DSC-Net hard to train, and the affinity matrix is inaccurate to represent the relationship of original data.

To address the above two problems, inspired by residual networks [19] and highway networks [20], we add skip connections between two corresponding convolutional and deconvolutional layers as shown in Fig.1. A building block is shown in Fig.2. Instead of directly learning the mappings from input X to the output Y, we would like the network to fit the residual of the problem, which is denoted as:

Such a learning strategy is applied on inner blocks of the encoding-decoding network to make training more effective.

By using the residual encoder-decoder network, the feature maps passed by skip connections carry much data detail, which helps deconvolution to better recover the data. Besides, the skip connections also achieve benefits on back-propagating the gradient to bottom layers, which avoids the network suffering from gradient vanishing.

Recall from the optimization problem in (1), to account for data corruptions, this problem is relaxed as:

where τ is the number of convolutional layer, Θc∈RN×N is the self-expressive coefficients matrix. Our goal is to train a deep residual encoder-decoder network, we can calculate the reconstruction loss of data X after the network as:

where ^X represents the data reconstructed by the residual encoder-decoder, Θe and Θd respectively represent the encoder parameters and the decoder parameters. Then we can compute the global loss of our RED-SC network:

where the network parameters Θ consist of Θc, Θe and Θd. In this work, we consider the ℓ2 norm regularization on Θc for computational efficiency.

In this paper, we focus on image clustering problems. As is shown in Fig.1, we use all the images as a single batch. The input images X

are mapped to a collection of latent vectors

Due to the limited size of data sets for unsupervised subspace clustering, it’s difficult to train a network with millions of parameters. Thus we design a pre-training network without self-expressive layer in Fig.3. Then we use the trained parameters to initialize the encoder and decoder layers in our fine-tuning network with the self-expressive layer. With the help of Adam [22], we then use a big batch of all the data to minimize the loss L(Θ) defined in (6). Note that we don’t use any label information to train the model, our training strategy remains unsupervised. Finally, we use the trained self-expressive coefficients to construct the affinity matrix for spectral clustering, and get the clustering labels.

We implement our approach with Tensorflow

We evaluate the effectiveness of RED-SC on MNIST, which consists of 70,000 hand-written digit images of size 28×28. We randomly select 1,000 images for each digit, resulting a subset of 10,000 images. For traditional SC algorithms LRR, SSC and ENSC, we use a subset of 1,000 images due to their limited scalability. The results are reported in Table 1.

We can observe that RED-SC outperforms the traditional SC algorithms greatly, this is partly because RED-SC uses a multi-layer encoder as the feature extractor. Besides, compared with the deep approach DSC-Net, our RED-SC obtains better performance in all three metrics. This is because RED-SC tunes the self-expressive coefficients in multiple latent spaces, while DSC-Net only uses the latent representation from the last convolutional layer. This experimental result demonstrates the effectiveness of RED-SC to ensure better self-expressive coefficients for spectral clustering.

4.2 Experiments on Extended Yale B

We evaluate the efficiency of RED-SC in model training and fine-tuning on Extended Yale B, which contains 2,414 frontal face images of 38 individuals under 9 poses and 64 illumination conditions. Each cropped face image consists of 192×168 pixels. We downsample the images to 48×42 pixels. We randomly pick n∈{10,15,20,25,30,38} subjects and take all the images of selected subjects to be clustered.

As is shown in Table 2

, RED-SC remarkably reduces the clustering error and outperforms all the listed methods. This demonstrates again the effectiveness of RED-SC. Besides, we report the convergence compared with DSC-Net with the same number of parameters in Fig.4. From Fig.4(a) we observe that RED-SC converges much faster than DSC-Net in training, since the residual encoder-decoder architecture helps back-propagate gradient to better fit the end-to-end mapping. From Fig.4(b) we observe that RED-SC generates a high-quality affinity matrix for spectral clustering by approximately 300 epoches, while DSC-Net uses about 1,000 epoches. This is partly because that RED-SC uses the latent representation from multiple convolutional layers to fine-tune the self-expressive coefficients, which accelerates the convergence. Thus RED-SC gains a higher efficiency.

We present a Residual Encoder-Decoder network for deep Subspace Clustering (RED-SC), which symmetrically links convolutional and deconvolutional layers with skip-layer connections. We present a new global loss and minimize it by RED-SC. We are the first one to apply residual encoder-decoder on unsupervised learning tasks. Series of experiments validate that RED-SC remarkably reduces computational cost and improves clustering performance.