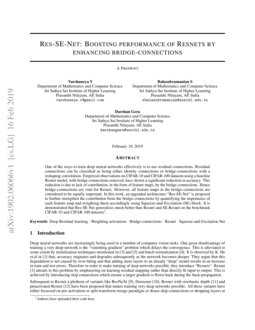 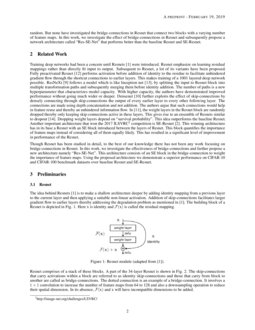 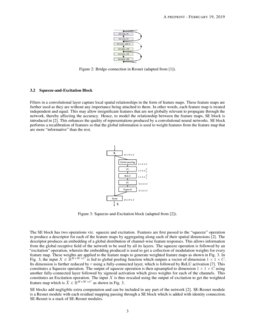 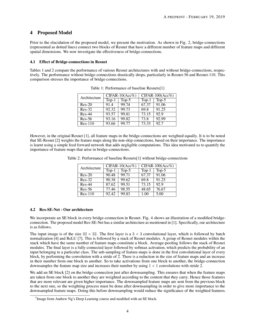 Deep neural networks are increasingly being used in a number of computer vision tasks. One great disadvantage of training a very deep network is the “vanishing gradient” problem which delays the convergence. This is alleviated to some extent by initialization techniques mentioned in

[4]. It is observed by K. He et.al in [1] that, accuracy stagnates and degrades subsequently as the network becomes deeper. They argue that this degradation is not caused by over-fitting and that adding more layers to an already “deep” model results in an increase in train and test errors. Therefore in order to make training of deep networks possible, they introduce “Resnets”. Resnet [1] attends to this problem by emphasizing on learning residual mapping rather than directly fit input to output. This is achieved by introducing skip connections which ensure a larger gradient is flown back during the back-propagation.

Subsequent to Resnet a plethora of variants like ResNeXt [9], Densenet [10], Resnet with stochastic depth [11] and preactivated Resnet [12] have been proposed that makes training very deep networks possible. All these variants have either focussed on pre-activation or split-transform-merge paradigm or dense skip connections or dropping layers at random. But none have investigated the bridge-connections in Resnet that connect two blocks with a varying number of feature maps. In this work, we investigate the effect of bridge-connections in Resnet and subsequently propose a network architecture called “Res-SE-Net” that performs better than the baseline Resnet and SE-Resnet.

Training deep networks had been a concern until Resnets [1] were introduced. Resnet emphasize on learning residual mappings rather than directly fit input to output. Subsequent to Resnet, a lot of its variants have been proposed. Fully preactivated Resnet [12] performs activation before addition of identity to the residue to facilitate unhindered gradient flow through the shortcut connections to earlier layers. This makes training of a 1001 layered deep network possible. ResNeXt [9] follows a model which is like Inception net [13]

, by splitting the input to Resnet block into multiple transformation paths and subsequently merging them before identity addition. The number of paths is a new hyperparameter that characterizes model capacity. With higher capacity, the authors have demonstrated improved performance without going much wider or deeper. Densenet

[10] further exploits the effect of skip-connections by densely connecting through skip-connections the output of every earlier layer to every other following layer. The connections are made using depth concatenation and not addition. The authors argue that such connections would help in feature reuse and thereby an unhindered information flow. In [11], the weight layers in the Resnet block are randomly dropped thereby only keeping skip-connections active in these layers. This gives rise to an ensemble of Resnets similar to dropout [14]

. Dropping weight layers depend on “survival probability”. This idea outperforms the baseline Resnet. Another important architecture that won the 2017 ILSVRC

222http://image-net.org/challenges/LSVRC/ competition is SE-Resnet [2]. This winning architecture has in its base a Resnet with an SE block introduced between the layers of Resnet. This block quantifies the importance of feature maps instead of considering all of them equally likely. This has resulted in a significant level of improvement in performance of the Resnet.

Though Resnet has been studied in detail, to the best of our knowledge there has not been any work focusing on bridge-connections in Resnet. In this work, we investigate the effectiveness of bridge-connections and further propose a new architecture namely “Res-SE-Net”. This architecture consists of an SE block in the bridge-connection to weight the importance of feature maps. Using the proposed architecture we demonstrate a superior performance on CIFAR-10 and CIFAR-100 benchmark datasets over baseline Resnet and SE-Resnet.

The idea behind Resnets [1] is to make a shallow architecture deeper by adding identity mapping from a previous layer to the current layer and then applying a suitable non-linear activation. Addition of skip-connections facilitates larger gradient flow to earlier layers thereby addressing the degradation problem as mentioned in [1]. The building block of a Resnet is depicted in Fig. 1. Here x is identity and F(x) is called the residual mapping.

Resnet comprises of a stack of these blocks. A part of the 34-layer Resnet is shown in Fig. 2. The skip-connections that carry activations within a block are referred to as identity skip-connections and those that carry from block to another are called as bridge-connections. The dotted connection is an example of a bridge-connection. It involves a 1×1 convolution to increase the number of feature maps from 64 to 128 and also a downsampling operation to reduce their spatial dimension. In its absence, F(x) and x will have incompatible dimensions to be added.

Filters in a convolutional layer capture local spatial relationships in the form of feature maps. These feature maps are further used as they are without any importance being attached to them. In other words, each feature map is treated independent and equal. This may allow insignificant features that are not globally relevant to propagate through the network, thereby affecting the accuracy. Hence, to model the relationship between the feature maps, SE block is introduced in [2]

. This enhances the quality of representations produced by a convolutional neural networks. SE block performs a recalibration of features so that the global information is used to weight features from the feature map that are more “informative” than the rest.

The SE block has two operations viz. squeeze and excitation. Features are first passed to the “squeeze” operation to produce a descriptor for each of the feature maps by aggregating along each of their spatial dimensions [2]. The descriptor produces an embedding of a global distribution of channel-wise feature responses. This allows information from the global receptive field of the network to be used by all its layers. The squeeze operation is followed by an “excitation” operation, wherein the embedding produced is used to get a collection of modulation weights for every feature map. These weights are applied to the feature maps to generate weighted feature maps as shown in Fig. 3. In Fig. 3, the input X∈RH×W×C

1×1×C. Its dimension is further reduced by r

using a fully-connected layer, which is followed by ReLU activation

[7]. This constitutes a Squeeze operation. The output of squeeze operation is then upsampled to dimension 1×1×C using another fully-connected layer followed by sigmoid activation which gives weights for each of the channels. This constitutes an Excitation operation. The input X is thus rescaled using the output of excitation to get the weighted feature map which is ~X∈RH×W×C as shown in Fig. 3.

Prior to the elucidation of the proposed model, we present the motivation. As shown in Fig. 2, bridge-connections (represented as dotted lines) connect two blocks of Resnet that have a different number of feature maps and different spatial dimensions. We now investigate the effectiveness of bridge-connections.

4.1 Effect of Bridge-connections in Resnet

The input image is of the size 32×32. The first layer is a 3×3 convolutional layer, which is followed by batch normalization [4] and ReLU [7]

. This is followed by a stack of Resnet modules. A group of Resnet modules within the stack which have the same number of feature maps constitute a block. Average-pooling follows the stack of Resnet modules. The final layer is a fully-connected layer followed by softmax activation, which predicts the probability of an input belonging to a particular class. The sub-sampling of feature-maps is done in the first convolutional layer of every block, by performing the convolution with a stride of 2. There is a reduction in the size of feature maps and an increase in their number from one block to another. So to take activations from one block to another, the bridge-connection downsamples the feature map size and increases their number by using

We conducted our experiments on Resnets of depths 20, 32, 44, 56 and 110 layers. Our implementations are coded in Pytorch

At the test time, we only normalize the images. The input to the network is of size 32×32.

The architecture of the network used, for both CIFAR-10 and CIFAR-100 datasets, is mentioned in section 4

[5] and batch normalization [4] is adopted. Dropouts [14] were not used for this model. The hyperparameters used are enlisted in Table 3.

With the improvement that addition of SE block provides, one might want to add SE blocks to all of the skip-connections so as to make the performance even better. But we have empirically found that adding an SE block to every identity skip-connections degrades the performance on CIFAR-10 and CIFAR-100 datasets as the depth increases. Also, as for the reasons mentioned in section 4, the addition of SE block before downsampling does not give better results either.

We now analyze the training phase of Res-SE-Net by plotting training losses for all of the aforesaid depths and for both the datasets. From Fig. 5, Fig. 6 and Fig. 7 we can conclude that training of Res-SE-Net has taken place smoothly. There is no abrupt increase in training loss of Res-SE-Net models. This shows that gradient flow has not been hindered by the introduction of an SE block in bridge-connections, keep intact the principle of Resnet (base of our Res-SE-Net) that skip-connections facilitate smooth training of deep networks.

The authors wish to dedicate this work to the founder chancellor of Sri Sathya Sai Institute of Higher Learning, Bhagawan Sri Sathya Sai Baba. The authors also wish to extend their gratitude to Dr. Vineeth N Balasubramanian, Associate Professor in the Department of Computer Science and Engineering, Indian Institute of Technology - Hyderabad.