Sentences are important semantic units of natural language. A generic, distributional representation of sentences that can capture the latent semantics is beneficial to multiple downstream applications. We observe a simple geometry of sentences -- the word representations of a given sentence (on average 10.23 words in all SemEval datasets with a standard deviation 4.84) roughly lie in a low-rank subspace (roughly, rank 4). Motivated by this observation, we represent a sentence by the low-rank subspace spanned by its word vectors. Such an unsupervised representation is empirically validated via semantic textual similarity tasks on 19 different datasets, where it outperforms the sophisticated neural network models, including skip-thought vectors, by 15 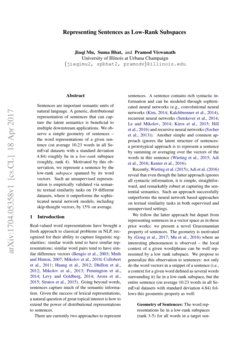 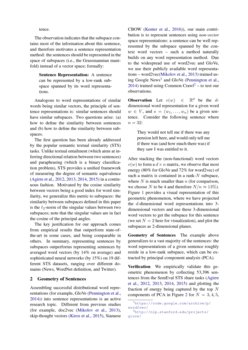 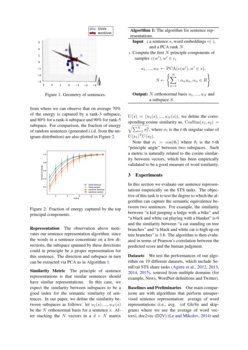 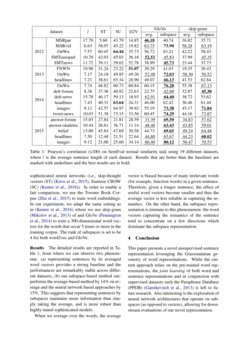 There are currently two approaches to represent sentences. A sentence contains rich syntactic information and can be modeled through sophisticated neural networks (e.g., convolutional neural networks

Recently, Wieting et al. (2015); Adi et al. (2016) reveal that even though the latter approach ignores all syntactic information, it is simple, straightforward, and remarkably robust at capturing the sentential semantics. Such an approach successfully outperforms the neural network based approaches on textual similarity tasks in both supervised and unsupervised settings.

We follow the latter approach but depart from representing sentences in a vector space as in these prior works; we present a novel Grassmannian property of sentences. The geometry is motivated by Gong et al. (2017); Mu et al. (2016) where an interesting phenomenon is observed – the local context of a given word/phrase can be well represented by a low rank subspace. We propose to generalize this observation to sentences: not only do the word vectors in a snippet of a sentence (i.e., a context for a given word defined as several words surrounding it) lie in a low-rank subspace, but the entire sentence (on average 10.23 words in all SemEval datasets with standard deviation 4.84) follows this geometric property as well:

Geometry of Sentences: The word representations lie in a low-rank subspaces (rank 3-5) for all words in a target sentence.

The observation indicates that the subspace contains most of the information about this sentence, and therefore motivates a sentence representation method: the sentences should be represented in the space of subspaces (i.e., the Grassmannian manifold) instead of a vector space; formally:

Sentence Representation: A sentence can be represented by a low-rank subspace spanned by its word representations.

The first question has been already addressed by the popular semantic textual similarity (STS) tasks. Unlike textual entailment (which aims at inferring directional relation between two sentences) and paraphrasing (which is a binary classification problem), STS provides a unified framework of measuring the degree of semantic equivalence Agirre et al. (2012, 2013, 2014, 2015)

The key justification for our approach comes from empirical results that outperform state-of-the-art in some cases, and being comparable in others. In summary, representing sentences by subspaces outperforms representing sentences by averaged word vectors (by 14% on average) and sophisticated neural networks (by 15%) on 19 different STS datasets, ranging over different domains (News, WordNet definition, and Twitter).

Let v(w)∈Rd be the d-dimensional word representation for a given word w∈V, and s=(w1,…,wn) be a given sentence. Consider the following sentence where n=32:

After stacking the (non-functional) word vectors v(w) to form a d×n matrix, we observe that most energy (80% for GloVe and 72% for word2vec) of such a matrix is contained in a rank-N subspace, where N is much smaller than n (for comparison, we choose N to be 4 and therefore N/n≈13%). Figure 1 provides a visual representation of this geometric phenomenon, where we have projected the d-dimensional word representations into 3-dimensional vectors and use these 3-dimensional word vectors to get the subspace for this sentence (we set N=2 here for visualization), and plot the subspaces as 2-dimensional planes.

The example above generalizes to a vast majority of the sentences: the word representations of a given sentence roughly reside in a low-rank subspace, which can be extracted by principal component analysis (PCA).

We empirically validate this geometric phenomenon by collecting 53,396 sentences from the SemEval STS share tasks Agirre et al. (2012, 2013, 2014, 2015) and plotting the fraction of energy being captured by the top N components of PCA in Figure 2 for N=3,4,5, from where we can observe that on average 70% of the energy is captured by a rank-3 subspace, and 80% for a rank-4 subspace and 90% for rank-5 subspace. For comparison, the fraction of energy of random sentences (generated i.i.d. from the unigram distribution) are also plotted in Figure 2.

The observation above motivates our sentence representation algorithm: since the words in a sentence concentrate on a few directions, the subspace spanned by these directions could in principle be a proper representation for this sentence. The direction and subspace in turn can be extracted via PCA as in Algorithm 1.

The principle of sentence representations is that similar sentences should have similar representations. In this case, we expect the similarity between subspaces to be a good index for the semantic similarity of sentences. In our paper, we define the similarity between subspaces as follows: let u1(s),...,uN(s) be the N orthonormal basis for a sentence s. After stacking the N vectors in a d×N matrix U(s)=(u1(s),...,uN(s)), we define the corresponding cosine similarity as, CosSim(s1,s2)=√∑Nt=1σ2t, where σt is the t-th singular value of U(s1)TU(s2).

Note that σt=cos(θt) where θt is the t-th “principle angle” between two subspaces. Such a metric is naturally related to the cosine similarity between vectors, which has been empirically validated to be a good measure of word similarity.

In this section we evaluate our sentence representations empirically on the STS tasks. The objective of this task is to test the degree to which the algorithm can capture the semantic equivalence between two sentences. For example, the similarity between “a kid jumping a ledge with a bike” and “a black and white cat playing with a blanket” is 0 and the similarity between “a cat standing on tree branches” and “a black and white cat is high up on tree branches” is 3.6. The algorithm is then evaluated in terms of Pearson’s correlation between the predicted score and the human judgment.

We test the performances of our algorithm on 19 different datasets, which include SemEval STS share tasks Agirre et al. (2012, 2013, 2014, 2015), sourced from multiple domains (for example, News, WordNet definitions and Twitter).

Our main comparisons are with algorithms that perform unsupervised sentence representation: average of word representations (i.e., avg. (of GloVe and skip-gram) where we use the average of word vectors), doc2vec (D2V) Le and Mikolov (2014) and sophisticated neural networks (i.e., skip-thought vectors (ST) Kiros et al. (2015), Siamese CBOW (SC) Kenter et al. (2016)). In order to enable a fair comparison, we use the Toronto Book Corpus Zhu et al. (2015) to train word embeddings. In our experiment, we adapt the same setting as in Kenter et al. (2016) where we use skip-gram Mikolov et al. (2013) of and GloVe Pennington et al. (2014) to train a 300-dimensional word vectors for the words that occur 5 times or more in the training corpus. The rank of subspaces is set to be 4 for both word2vec and GloVe.

The detailed results are reported in Table 1, from where we can observe two phenomena: (a) representing sentences by its averaged word vectors provides a strong baseline and the performances are remarkably stable across different datasets; (b) our subspace-based method outperforms the average-based method by 14% on average and the neural network based approaches by 15%. This suggests that representing sentences by subspaces maintains more information than simply taking the average, and is more robust than highly-tuned sophisticated models.

When we average over the words, the average vector is biased because of many irrelevant words (for example, function words) in a given sentence. Therefore, given a longer sentence, the effect of useful word vectors become smaller and thus the average vector is less reliable at capturing the semantics. On the other hand, the subspace representation is immune to this phenomenon: the word vectors capturing the semantics of the sentence tend to concentrate on a few directions which dominate the subspace representation.