In this paper, we study the problem of using contextual da- ta points of a data point for its classification problem. We propose to represent a data point as the sparse linear reconstruction of its context, and learn the sparse context to gather with a linear classifier in a su- pervised way to increase its discriminative ability. We proposed a novel formulation for context learning, by modeling the learning of context reconstruction coefficients and classifier in a unified objective. In this objective, the reconstruction error is minimized and the coefficient spar- sity is encouraged. Moreover, the hinge loss of the classifier is minimized and the complexity of the classifier is reduced. This objective is opti- mized by an alternative strategy in an iterative algorithm. Experiments on three benchmark data set show its advantage over state-of-the-art context-based data representation and classification methods. 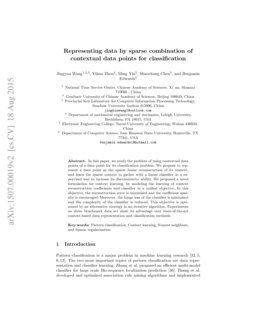 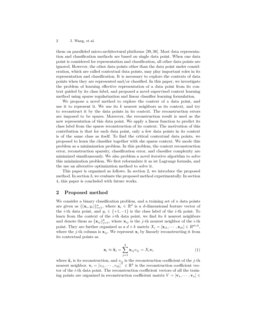 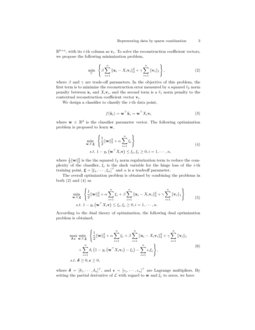 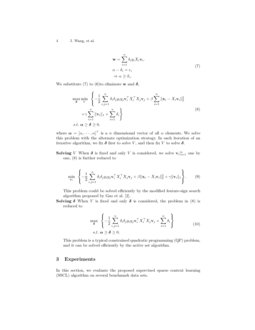 Pattern classification is a major problem in machine learning research

We propose a novel method to explore the context of a data point, and use it to represent it. We use its k nearest neighbors as its context, and try to reconstruct it by the data points in its context. The reconstruction errors are imposed to be spares. Moreover, the reconstruction result is used as the new representation of this data point. We apply a linear function to predict its class label from the sparse reconstruction of its context. The motivation of this contribution is that for each data point, only a few data points in its context is of the same class as itself. To find the critical contextual data points, we proposed to learn the classifier together with she sparse context. We mode this problem as a minimization problem. In this problem, the context reconstruction error, reconstruction sparsity, classification error, and classifier complexity are minimized simultaneously. We also problem a novel iterative algorithm to solve this minimization problem. We first reformulate it as ist Lagrange formula, and the use an alterative optimization method to solve it.

We consider a binary classification problem, and a training set of n data points are given as {(xi,yi)}ni=1, where xi∈Rd is a d

-dimensional feature vector of the

where β and γ are trade-off parameters. In the objective of this problem, the first term is to minimize the reconstruction error measured by a squared ℓ2 norm penalty between xi and Xivi, and the second term is a ℓ1 norm penalty to the contextual reconstruction coefficient vector vi.

We design a classifier to classify the i-th data point,

where w∈Rd is the classifier parameter vector. The following optimization problem is proposed to learn w,

where 12∥w∥22 is the the squared ℓ2 norm regularization term to reduce the complexity of the classifier, ξi is the slack variable for the hinge loss of the i-th training point, ξ=[ξ1,⋯,ξn]⊤ and α is a tradeoff parameter.

According to the dual theory of optimization, the following dual optimization problem is obtained,

where δ=[δ1,⋯,δn]⊤, and ϵ=[ϵ1,⋯,ϵn]⊤ are Lagrange multipliers. By setting the partial derivative of L with regard to w and ξi to zeros, we have

where α=[α,⋯,α]⊤ is a n dimensional vector of all α elements. We solve this problem with the alternate optimization strategy. In each iteration of an iterative algorithm, we fix δ first to solve V, and then fix V to solve δ.

When δ is fixed and only V is considered, we solve vi|ni=1 one by one, (8) is further reduced to

This problem could be solved efficiently by the modified feature-sign search algorithm proposed by Gao et al. [2].

When V is fixed and only δ is considered, the problem in (8) is reduced to

This problem is a typical constrained quadratic programming (QP) problem, and it can be solved efficiently by the active set algorithm.

In the experiments, we used three date sets, which are introduced as follows:

To conduct the experiments, we used the 10-fold cross validation.

[11]. The context-based sparse representation method is Gao et al.’s Laplacian sparse coding (LSC) [3]. The boxplots of the 10-fold cross validation of the compared algorithms are given in figure 1. From the figures, we can see that the proposed method SSCL outperforms all the other methods on all three data sets. The second best method is SRBC, which also uses sparse context to represent the data point. This is a strong evidence that learning a supervised sparse context is critical for classification problem.

In the proposed formulation, there are three tradeoff parameters, α, β, and γ. We plot the curve of mean prediction accuracies against different values of parameters, and show them in figure 2. From figure 2(a) and 2(b), we can see the accuracy is stable to the parameter α and β. From figure 2(c), we can see a larger γ leads to better classification performances.

In this paper, we study the problem of using context to represent and classify data points. We propose to use a sparse linear combination of the data points in the context of a data point to represent itself. Moreover, to increase the discriminative ability of the new representation, we develop an supervised method to learn the sparse context by learning it and a classifier together in an unified optimization framework. Experiments on three benchmark data sets show its advantage over state-of-the-art context-based data representation and classification methods. In the future, we will extend the proposed method to applications of information security [33, 27, 30, 29, 28, 31, 34], bioinformatics [25, 24, 23, 12, 15, 14, 7, 37, 7]