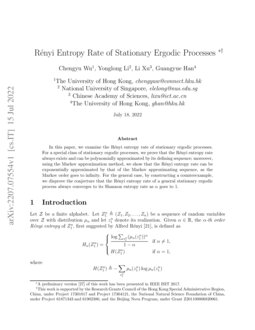 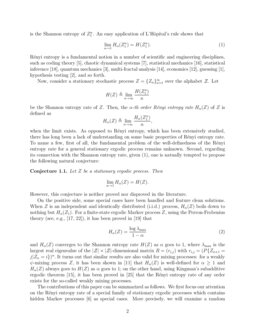 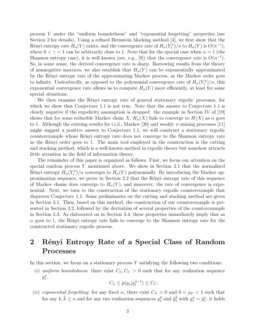 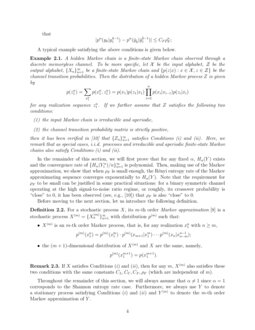 Predictability of behavior has emerged an an important characteristic in...
Brian Vegetabile, et al. ∙

Asymptotic equipartition property for a Markov source having ambiguous alphabet

We propose a generalization of the asymptotic equipartition property to ...
Tamás Tasnádi, et al. ∙

It is common to assess the "memory strength" of a stationary process loo...
Anatoly Khina, et al. ∙

We investigate a class of estimators of the Markov order for stationary ...
Łukasz Dębowski, et al. ∙

be a sequence of random variables over

Z with distribution μn and let zn1 denote its realization. Given α∈R, the α-th order Rényi entropy of Zn1, first suggested by Alfred Rényi [21], is defined as

is the Shannon entropy of Zn1. An easy application of L’Hôpital’s rule shows that

Rényi entropy is a fundamental notion in a number of scientific and engineering disciplines, such as coding theory [5], chaotic dynamical systems [7], statistical mechanics [16], statistical inference [18], quantum mechanics [3], multi-fractal analysis [14], economics [12], guessing [1], hypothesis testing [2], and so forth.

when the limit exists. As opposed to Rényi entropy, which has been extensively studied, there has long been a lack of understanding on some basic properties of Rényi entropy rate. To name a few, first of all, the fundamental problem of the well-definedness of the Rényi entropy rate for a general stationary ergodic process remains unknown. Second, regarding its connection with the Shannon entropy rate, given (1), one is natually tempted to propose the following natural conjecture:

Let Z be a stationary ergodic process. Then

However, this conjecture is neither proved nor disproved in the literature.

On the positive side, some special cases have been handled and feature clean solutions. When Z is an independent and identically distributed (i.i.d.) process, Hα(Z) boils down to nothing but Hα(Z1). For a finite-state ergodic Markov process Z, using the Perron-Frobenius theory (see, e.g., [17, 22]), it has been proved in [19] that

and Hα(Z) converges to the Shannon entropy rate H(Z) as α goes to 1, where λmax

is the largest real eigenvalue of the

|Z|×|Z|-dimensional matrix R=(ri,j) with ri,j=(P{Zn+1=j|Zn=i})α. It turns out that similar results are also valid for mixing processes: for a weakly ψ-mixing process Z, it has been shown in [11] that Hα(Z) is well-defined for α≥1 and Hα(Z) always goes to H(Z) as α goes to 1; on the other hand, using Kingman’s subadditive ergodic theorem [15], it has been proved in [25] that the Rényi entropy rate of any order exists for the so-called weakly mixing processes.

The contributions of this paper can be summarized as follows. We first focus our attention on the Rényi entropy rate of a special family of stationary ergodic processes which contains hidden Markov processes [6] as special cases. More precisely, we will examine a random process Y under the “uniform boundedness” and “exponential forgetting” properties (see Section 2 for details). Using a refined Bernstein blocking method [4], we first show that the Rényi entropy rate Hα(Y) exists, and the convergence rate of Hα(Yn1)/n to Hα(Y) is O(n−γ), where 0<γ<1 can be arbitrarily close to 1. Note that for the special case when α=1 (the Shannon entropy case), it is well known (see, e.g., [9]) that the convergence rate is O(n−1). So, in some sense, the derived convergence rate is sharp. Borrowing results from the theory of nonnegative matrices, we also establish that Hα(Y) can be exponentially approximated by the Rényi entropy rate of the approximating Markov process, as the Markov order goes to infinity. Undoubtedly, as opposed to the polynomial convergence rate of Hα(Yn1)/n, this exponential convergence rate allows us to compute Hα(Y) more efficiently, at least for some special situations.

We then examine the Rényi entropy rate of general stationary ergodic processes, for which we show that Conjecture 1.1 is not true. Note that the answer to Conjecture 1.1 is clearly negative if the ergodicity assumption is dropped: the example in Section IV of [19]

shows that for some reducible Markov chain

X, Hα(X) fails to converge to H(X) as α goes to 1. Although the existing results for i.i.d., Markov [20] and weakly ψ-mixing processes [11] might suggest a positive answer to Conjecture 1.1, we will construct a stationary ergodic counterexample whose Rényi entropy rate does not converge to the Shannon entropy rate as the Rényi order goes to 1. The main tool employed in the construction is the cutting and stacking method, which is a well-known method in ergodic theory but somehow attracts little attention in the field of information theory.

The remainder of this paper is organized as follows. First, we focus our attention on the special random process Y mentioned above. We show in Section 2.1 that the normalized Rényi entropy Hα(Yn1)/n converges to Hα(Y) polynomially. By introducing the Markov approximation sequence, we prove in Section 2.2 that the Rényi entropy rate of this sequence of Markov chains does converge to Hα(Y), and moreover, the rate of convergence is exponential. Next, we turn to the construction of the stationary ergodic counterexample that disproves Conjecture 1.1. Some preliminaries on the cutting and stacking method are given in Section 3.1. Then, based on this method, the construction of our counterexample is presented in Section 3.2, followed by the derivation of several properties of the counterexample in Section 3.3. As elaborated on in Section 3.4, these properties immediately imply that as α goes to 1, the Rényi entropy rate fails to converge to the Shannon entropy rate for the constructed stationary ergodic process.

2 Rényi Entropy Rate of a Special Class of Random Processes

In this section, we focus on a stationary process Y satisfying the following two conditions:

A typical example satisfying the above conditions is given below.

be the channel transition probabilities. Then the distribution of a hidden Markov process

Z is given by

for any realization sequence zn1. If we further assume that Z satisfies the following two conditions:

to be small can be justified in some practical situations: for a binary symmetric channel operating at the high signal-to-noise ratio regime, or roughly, its crossover probability is “close” to

Before moving to the next section, let us introduce the following definition.

If X satisfies Conditions (i) and (ii), then for any m, X(m) also satisfies these two conditions with the same constants CL,CU,CF,ρF (which are independent of m).

Throughout the remainder of this section, we will always assume that α≠1 since α=1 corresponds to the Shannon entropy rate case. Furthermore, we always use Y to denote a stationary process satisfying Conditions (i) and (ii) and Y(m) to denote the m-th order Markov approximation of Y.

The following theorem establishes the existence of the Rényi entropy rate Y; moreover, it establishes the convergence of Hα(Yn1)/n to Hα(Y) and gives a rate of convergence. Here, we note from Remark 2.3 that the theorem also applies to the m-th order Markov approximation Y(m) for any m≥1.

For any 0<γ<1, there exists a constant C such that for all n,

We only prove the theorem for the case 0≤α<1, since the cases α<0 and α>1 can be similarly handled.

Now we use the Bernstein blocking method (see [4]) to consecutively partition the sequence yn1 into small pieces of length q, q and p−2q. To be more specific, define

and their truncated versions

Then, using the fact that for k≠j, the y-sequences associated with ^ηj^ζj^ξj+1 and ^ηk^ζk^ξk+1 are both of length p=nλ and their index sets are non-overlapping, we have

Taking logarithm and dividing both sides of (3) by n, we obtain

for sufficient large n. It then follows that

for some constant C1. Applying a parallel argument to the other direction, we obtain that for sufficiently large n,

Now consider any m,n with m>n≥N, where N is a sufficiently large number to be determined later. Pick a number ξ between 1 and √2 (e.g., 5/4). Let t be the positive integer such that

for any m>n≥N. Thus the sequence {Hα,n(Y)}n∈N is Cauchy, and thereby convergent. Furthermore, for any positive integers k and n with nγ(γ−1)/1+γ≤12, we have

Then, letting k tend to infinity, we have, for all sufficiently large n,

The proof is then complete with an appropriately chosen common constant C for all n. ∎

When it comes to the computation of Hα(Y), the convergence of {Hα(Yn1)/n} as in Theorem 2.4 may be too slow to be applied in practice. In this section, we show that under some additional assumptions, Hα(Y) can be approximated by another exponentially convergent sequence that can be efficiently computed.

Our motivation comes from the fact that the Rényi entropy rate of a Markov process features a simple formula as in (2). For any m, let Y(m) be the m-th order Markov approximation of Y. It is obvious form Definition 2.2 that as m goes to infinity, Y(m) converges in distribution to the original process Y; moreover, we note from [19] that Hα(Y(m)) is well-defined for all m. Indeed, we have the following theorem.

Note that for any m and n, we have

Replacing pα(⋅)’s with simpler notations ai’s and bi’s, we continue to derive

It then follows from (8) that

as long as m≥max{N1+1,N2}. The desired convergence then follows from the arbitrariness of ε. ∎

Having established the convergence of {Hα(Y(m))} to Hα(Y), we now turn to its convergence rate.

First of all, for any fixed m, by a usual m-step blocking argument, we can transform Y(m) into a first-order Markov chain over a larger alphabet. To be more specific, define a new process W(m)={W(m)n}∞n=1 such that

Apparently, W(m) is a first-order Markov chain over the alphabet Ym. Let P(m)={p(m)ij} be the transition probability matrix of W(m), R(m)={(p(m)ij)α} be the matrix obtained by taking the α-th power of each entry of P(m), and let λ(m) be the largest eigenvalue of R(m). Recalling from (2) that

in order to derive the convergence rate of Hα(Y(m)), we only need to compare λ(m) and λ(m+1). Observing that λ(m) and λ(m+1) are the largest eigenvalues of two matrices whose dimensions are different, we first “upscale” the matrix R(m) by viewing Y(m) as an (m+1)-th order Markov chain with the corresponding |Y|m+1×|Y|m+1-dimensional transition probability matrix ˜R(m). It can then be readily verified that ˜R(m) has the same largest eigenvalue as R(m). Hence, it suffices for us to compare R(m+1) and ˜R(m), both of which are of dimension |Y|m+1×|Y|m+1.

Assuming ρF is small enough, the following theorem uses the previous observation to establish the exponential convergence of {Hα(Y(m))} as m→∞.

According to Theorem 2.5, it suffices for us to show the exponential convergence of the sequence {Hα(Y(m))}.

Let Δm=R(m+1)−˜R(m). It follows from Condition (ii) that the absolute value of each nonzero entry of Δm is upper bounded by CFρmF. Applying the Collatz-Wielandt formula (see, e.g., [13]), we have

be the right eigenvector of

˜R(m) such that the equality λ(m)=mini[˜R(m)v]ivi is achieved (Note from the Perron-Frobenius theorem [17, 22] that v is a positive vector since ˜R(m) is a nonnegative irreducible matrix). Then we continue from (2.2) as follows:

where we have used the fact that each row of Δm has exactly |Y| strictly positive entries.