We show that for any α>0 the Rényi entropy of order α is minimized, among all symmetric log-concave random variables with fixed variance, either for a uniform distribution or for a two sided exponential distribution. The first case occurs for α∈ (0,α^*] and the second case for α∈ [α^*,∞), where α^* satisfies the equation 1/α^*-1logα^*= 1/2log 6, that is α^* ≈ 1.241. 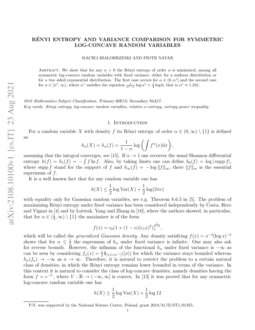 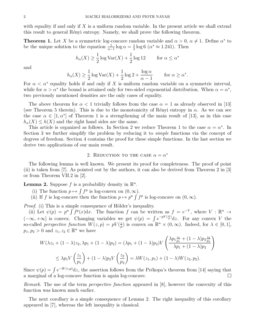 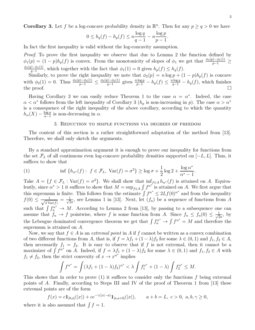 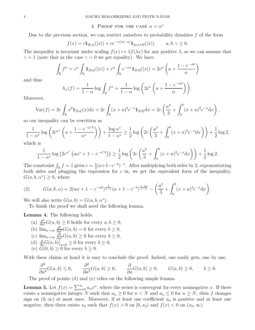 For a random variable X with density f its Rényi entropy of order α∈(0,∞)∖{1} is defined as

assuming that the integral converges, see [15]. If α→1 one recovers the usual Shannon differential entropy h(f)=h1(f)=−∫flnf. Also, by taking limits one can define h0(f)=log|suppf|, where suppf stand for the support of f and h∞(f)=−log∥f∥∞, there ∥f∥∞ is the essential supremum of f.

with equality only for Gaussian random variables, see e.g. Theorem 8.6.5 in [5]. The problem of maximizing Rényi entropy under fixed variance has been considered independently by Costa, Hero and Vignat in [4] and by Lutwak, Yang and Zhang in [10], where the authors showed, in particular, that for α∈(13,∞)∖{1} the maximizer is of the form

which will be called the generalized Gaussian density. Any density satisfying f(x)∼x−3(logx)−2 shows that for α≤13 the supremum of hα under fixed variance is infinite. One may also ask for reverse bounds. However, the infimum of the functional hα under fixed variance is −∞ as can be seen by considering fn(x)=n21[1,1+n−1](|x|) for which the variance stays bounded whereas hα(fn)→−∞ as n→∞. Therefore, it is natural to restrict the problem to a certain natural class of densities, in which the Rényi entropy remains lower bounded in terms of the variance. In this context it is natural to consider the class of log-concave densities, namely densities having the form f=e−V, where V:R→(−∞,∞] is convex. In [13] it was proved that for any symmetric log-concave random variable one has

with equality if and only if X is a uniform random variable. In the present article we shall extend this result to general Rényi entropy. Namely, we shall prove the following theorem.

For α<α∗ equality holds if and only if X is uniform random variable on a symmetric interval, while for α>α∗ the bound is attained only for two-sided exponential distribution. When α=α∗, two previously mentioned densities are the only cases of equality.

The above theorem for α<1 trivially follows from the case α=1 as already observed in [13] (see Theorem 5 therein). This is due to the monotonicity of Rényi entropy in α. As we can see the case α∈[1,α∗] of Theorem 1 is a strengthening of the main result of [13], as in this case hα(X)≤h(X) and the right hand sides are the same.

This article is organized as follows. In Section 2 we reduce Theorem 1 to the case α=α∗. In Section 3 we further simplify the problem by reducing it to simple

functions via the concept of degrees of freedom. Section

4 contains the proof for these simple functions. In the last section we derive two applications of our main result.

2. Reduction to the case α=α∗

The following lemma is well known. We present its proof for completeness. The proof of point (ii) is taken from [7]. As pointed out by the authors, it can also be derived from Theorem 2 in [3] or from Theorem VII.2 in [2].

is a probability density in

(i) This is a simple consequence of Hölder’s inequality.

Since ψ(p)=∫e−W(z,p)dz, the assertion follows from the Prékopa’s theorem from [14] saying that a marginal of a log-concave function is again log-concave. ∎

The use of the term perspective function appeared in [8], however the convexity of this function was known much earlier.

The next corollary is a simple consequence of Lemma 2. The right inequality of this corollary appeared in [7], whereas the left inequality is classical.

Let f be a log-concave probability density in Rn. Then for any p≥q>0 we have

In fact the first inequality is valid without the log-concavity assumption.

3. Reduction to simple functions via degrees of freedom

The content of this section is a rather straightforward adaptation of the method from [13]. Therefore, we shall only sketch the arguments.

By a standard approximation argument it is enough to prove our inequality for functions from the set FL of all continuous even log-concave probability densities supported on [−L,L]. Thus, it suffices to show that

. We first argue that this supremum is finite. This follows from the estimate

∫fα∗≤2Lf(0)α∗ and from the inequality f(0)≤1√2Var(f)=1√2σ, see Lemma 1 in [13]. Next, let (fn) be a sequence of functions from A such that ∫fα∗n→M. According to Lemma 2 from [13], by passing to a subsequence one can assume that fn→f pointwise, where f is some function from A. Since fn≤fn(0)≤1√2σ, by the Lebesgue dominated convergence theorem we get that ∫fα∗n→∫fα∗=M and therefore the supremum is attained on A.

This shows that in order to prove (1) it suffices to consider only the functions f being extremal points of A. Finally, according to Steps III and IV of the proof of Theorem 1 from [13] these extremal points are of the form

where it is also assumed that ∫f=1.

Due to the previous section, we can restrict ourselves to probability densities f of the form

The inequality is invariant under scaling f(x)↦λf(λx) for any positive λ, so we can assume that γ=1 (note that in the case γ=0 we get equality). We have

so our inequality can be rewritten as

The constraint ∫Rf=1 gives c=12(a+1−e−b)−1. After multiplying both sides by 2, exponentiating both sides and plugging the expression for c in, we get the equivalent form of the inequality, G(a,b,α∗)≥0, where

To finish the proof we shall need the following lemma.

With these claims at hand it is easy to conclude the proof. Indeed, one easily gets, one by one,

The proof of points (d) and (e) relies on the following simple lemma.

With this preparation we are ready to prove Lemma 4.

(a) This point is the crucial observation of the proof. It turns out that

which is nonegative for α>13.

(b) By a direct computation we have

When a tends to infinity with b fixed this converges to

As a tends to infinity, we have

(e) To illustrate our method, before proceeding with the proof of (d) we shall prove (e), as the idea of the proof of (d) is similar, but the details are more complicated. Our goal is to show the inequality

It turns out that ϕ(b) changes sign on (0,∞) at most once. To show that, firstly, clear out the denominators (they have fixed sign on (0,∞)) to obtain the expression

Now we will apply Lemma 5 to (???). That expression can be rewritten as

This way we have proved that ϕ′(b) changes sign in exactly one point x0∈(0,∞). Thus, ϕ is first increasing and then decreasing. Since ϕ(0)=0 and limb→∞ϕ(b)=0, the assertion follows.

(d) We have to show that

Multiplying the above expression by the product of denominators does not change the hypothesis, since each of the denominators is positive. After this multiplication we get the expression

Let us consider the Taylor series ∑n≥0anbn of this function (it is clear that the series converges to the function everywhere). It can be shown (again using computational software) that coefficients of this series up to order 9 are nonnegative and coefficients of order greater than 9, but lesser than 30 are negative. Now we will show negativity of coefficients of order at least 30 (our bound will be very crude, so it would not work, if we replaced 30 with lower number). Firstly we note that

has n-th Taylor coefficient equal to

so all its coefficients are nonnegative. Thus we can change expression in square brackets to (eb−1)(ebα∗−1)(5/2−b/5) (we discard the first term and bound from above the second and third one) to increase every Taylor coefficient of main expression. Now we want to show the negativity of coefficients of order at least 30 for

The expression in square brackets has n-th Taylor coefficient cn equal to zero for n∈{0,1}, while for n≥2 it is