This paper summarizes the recent progress we have made for the computer vision technologies in physical therapy with the accessible and affordable devices. We first introduce the remote health coaching system we build with Microsoft Kinect. Since the motion data captured by Kinect is noisy, we investigate the data accuracy of Kinect with respect to the high accuracy motion capture system. We also propose an outlier data removal algorithm based on the data distribution. In order to generate the kinematic parameter from the noisy data captured by Kinect, we propose a kinematic filtering algorithm based on Unscented Kalman Filter and the kinematic model of human skeleton. The proposed algorithm can obtain smooth kinematic parameter with reduced noise compared to the kinematic parameter generated from the raw motion data from Kinect. 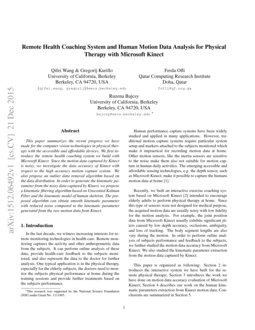 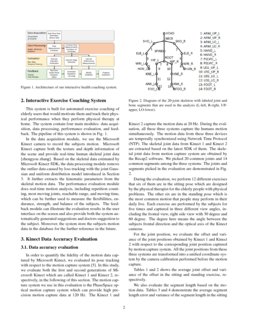 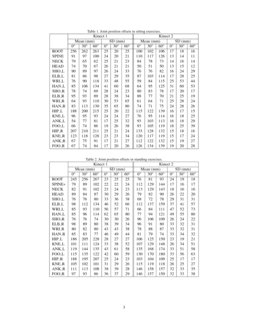 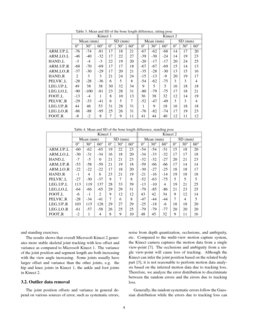 In the last decade, we witness increasing interests for remote monitoring technologies in health care. Remote monitoring captures the activity and other anthropometric data from the subjects. It can perform online analysis of these data, provide health-care feedback to the subjects monitored, and also represent the data to the doctor for further analysis. One typical application is in the physical therapy, especially for the elderly subjects, the doctors need to monitor the subjects’ physical performance at home during the training sessions and provide further treatments based on the subjects’ performance.

Human performance capture systems have been widely studied and applied in many applications. However, traditional motion capture systems require particular system setup and markers attached to the subjects monitored which make it impractical for recording motion data at home. Other motion sensors, like the inertia sensors are sensitive to the noise make them also not suitable for motion capture in human daily activities. The emerging accessible and affordable sensing technologies, e.g. the depth sensor, such as Microsoft Kinect, make it possible to capture the human’s motion data at home [1].

Recently, we built an interactive exercise coaching system based on Microsoft Kinect [2] intended to encourage elderly adults to perform physical therapy at home. Since this type of sensors were not designed for medical purpose, the acquired motion data are usually noisy with low fidelity for the motion analysis. For example, the joint position data from Microsoft Kinect usually exhibits significant jitters caused by low depth accuracy, occlusions, ambiguity, and loss of tracking. The body segment lengths are also vary during the motion. In order to perform online analysis of subjects’ performance and feedback to the subjects, we further studied the motion data accuracy from Microsoft Kinect. We also studied the kinematic parameter extraction from the motion data captured by Kinect.

This paper is organized as following: Section 2 introduces the interactive system we have built for the remote physical therapy; Section 3 introduces the work we have done on motion data accuracy evaluation of Microsoft Kinect; Section 4 describes our work on the human kinematic parameters extraction from Kinect motion data; Conclusions are summarized in Section 5.

This system is built for automated exercise coaching of elderly users that would motivate them and track their physical performance when they perform physical therapy at home. The system contain four main modules: data acquisition, data processing, performance evaluation, and feedback. The pipeline of this system is shown in Fig. 1.

In the data acquisition module, we use the Microsoft Kinect camera to record the subjects’ motion. Microsoft Kinect capture both the texture and depth information of the scene and provide real-time human skeletal joint data [zhengyou zhang]. Based on the skeletal data estimated by Microsoft Kinect SDK, the data processing module remove the outlier data caused by loss tracking with the joint Gaussian and uniform distribution model introduced in Section 3. It further extracts the kinematic parameters from the skeletal motion data. The performance evaluation module does real-time motion analysis, including repetition counting, most moving joints, reachable range, and moving time, which can be further used to measure the flexibilities, endurance, strength, and balance of the subjects. The feedback module can illustrate the evaluation results in the user interface on the screen and also provide both the system automatically generated suggestions and doctors’ suggestion to the subject. Moreover, the system store the subjects’ motion data in the database for the further reference in the future.

During the evaluation, we perform 12 different exercises that six of them are in the sitting pose which are designed by the physical therapist for the elderly people with physical problems. The other six are in the standing pose which is the most common motion that people may perform in their daily live. Each exercise are performed by the subjects for five times and captured in three different view angles, including the frontal view, right side view with 30 degree and 60 degree. The degree here means the angle between the subjects’ frontal direction and the optical axis of the Kinect cameras.

Tables 1 and 2 shows the average joint offset and variance of the offset in the sitting and standing exercise, respectively.

The results shows that overall Microsoft Kinect 2 generates more stable skeletal joint tracking with less offset and variance as compared to Microsoft Kinect 1. The variance of the joint position and segment length are both increasing with the view angle increasing. Some joints usually have larger offset and variance than the other joints, e.g. the hip and knee joints in Kinect 1, the ankle and foot joints in Kinect 2.

The joint position offsets and variance in general depend on various sources of error, such as systematic errors, noise from depth quantization, occlusions, and ambiguity, etc. Compared to the multi-view motion capture system, the Kinect camera captures the motion data from a single view-point [7]. The occlusions and ambiguity from a single view-point will cause loss of tracking. Although the Kinect can infer the joint position based on the related body part [3], it is not reasonable to perform motion data analysis based on the inferred motion data due to tracking loss. Therefore, we analyze the error distribution to discriminate between the random errors and the errors due to tracking loss.

By applying the mixture model and maximal likelihood estimation, we can remove the outlier data which satisfy the uniform distribution and make cleaner data for the further analysis. Table I demonstrates the joint offset of both standing and sitting exercises without the outlier data.

In motion analysis, the human’s skeleton can be represented as a series joints which are connected by bones. Therefore, the each joint position can be derived by its parent joint position, the corresponding segment orientation and length. The human’s skeleton can thus be represented as a kinematic chain. In this paper, we treat the root joint as the root of each kinematic chain. Based on the skeletal structure shown in Fig. 2, the SPINE, NECK, SHO_L, SHO_R, HIP_L, and HIP_R are modeled as the 3-DoF joints and their parent joints are ROOT, SPINE, NECK, NECK, ROOT, ROOT, respectively; The ELB_L, ELB_R, KNE_L, KNE_R are treated as the 1-DoF joints whose parent joints are SHO_L, SHO_R, HIP_L, HIP_R, respectively; The WRI_L, WRI_R, ANK_L, and ANK_R are the 2-DoF joints that their parent joints are ELB_L, ELB_R, KNE_L, KNE_R, respectively. For each joint, its position can be derived by its parent joint position, Tp, the segment length of its corresponding segment, lc, the relative rotation matrix of its corresponding segment, Rl, with respect to its parent segment, the rotation matrix of its parent segment, Rp, as the following function F:

With the kinematic model presented in the last section, we propose a kinematic filtering algorithm based on Kalman filtering to generate the kinematic parameter from the Kinect motion data [6]

2. Since the state transition and the observation measuring functions are nonlinear, we apply the Unscented Kalman Filter (UKF) [4] for the filtering. Since the segment lengths for a certain person are constants, we propose a four-pass UKF to meet with this constraints. In the first forward pass, the UKF is defined by the following functions

After the first two pass, the length of each segment are assigned as a constant in the following forward and backward passes. The covariance and the random terms in the random walk process of the segment lengths are all set to zeros.

Fig. 4 demonstrates the filtering results of UKF for the motion data from Kinect 1. The segment quaternion curves after filtering are much smoother than the input noisy data and also demonstrate strong periodic pattern which is in accordance to the input motion. Therefore, the UKF based on the kinematic model is a practical solution to extract kinematic parameters.

This paper summarize the recent progress in the motion analysis for physical therapy with the affordable and accessible device like Microsoft Kinect. Based on preliminary studies, our remote health coaching system receive positive feedback from the users for its accessibility and interaction. Since the motion data captured by Microsoft Kinect is noisy, we further studied the data fidelity of each joint position and segment length. We also propose a mixture model to distinguish the outlier data caused by loss of tracking. It can helps to reduce the noise in the further motion data analysis. Finally, the kinematic filtering based on UKF provide a solution to extract smooth kinematic parameters from the noisy motion data.