We propose a reliable intersection control mechanism for strategic autonomous and connected vehicles (agents) in non-cooperative environments. Each agent has access to his/her earliest possible and desired passing times, and reports a passing time to the intersection manager, who allocates the intersection temporally to the agents in a First-Come-First-Serve basis. However, the agents might have conflicting interests and can take actions strategically. To this end, we analyze the strategic behaviors of the agents and formulate Nash equilibria for all possible scenarios. Furthermore, among all Nash equilibria we identify a socially optimal equilibrium that leads to a fair intersection allocation, and correspondingly we describe a strategy-proof intersection mechanism, which achieves reliable intersection control such that the strategic agents do not have any incentive to misreport their passing times strategically. 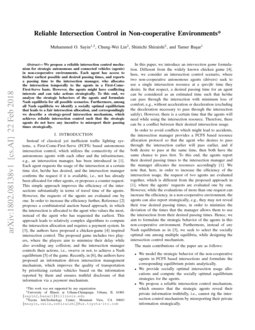 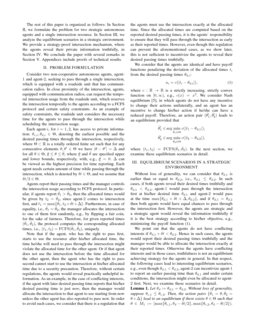 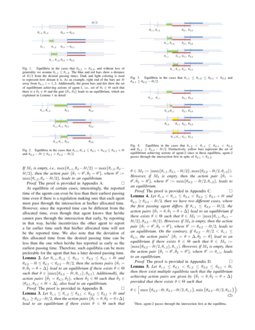 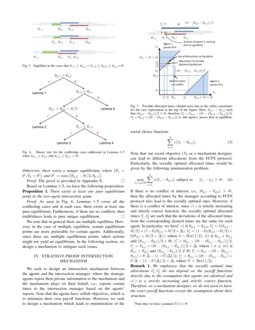 Instead of classical yet inefficient traffic lighting systems, a First-Come-First-Serve (FCFS) based autonomous intersection control, which utilizes the connectivity of the autonomous agents with each other and the infrastructure, e.g., an intersection manager, has been introduced in [1]. Each agent requests the usage of the intersection at a certain time slot, he/she has desired, and the intersection manager confirms the request if it is available, i.e., not has already been allocated for other agents, or proposes a counter request. This simple approach improves the efficiency of the intersections substantially in terms of travel time of the agents. However, the requests of the agents are evaluated one by one. In order to increase the efficiency further, Reference [2] proposes a combinatorial auction based approach, in which the intersection is allocated to the agent who values the most, instead of the agent who has requested the earliest. This approach leads to relatively complex algorithms to compute the intersection allocation and requires a payment system. In [3], the authors have proposed a chicken-game [4] inspired intersection control. The proposed game includes two players, where the players aim to minimize their delay while also avoiding any collision; and the intersection manager controls their actions, i.e., swerve or not, to achieve a Nash equilibrium [5] of the game. Recently, in [6], the authors have proposed an information driven intersection management mechanism, which improves the quality of transportation by prioritizing certain vehicles based on the information reported by them and ensures truthful disclosure of that information via a payment mechanism.

In this paper, we introduce an intersection game formulation. Different from the widely known chicken game [4], here, we consider an intersection control scenario, where two non-cooperative autonomous agents (drivers) seek to use a single intersection resource at a specific

In order to avoid conflicts which might lead to accidents, the intersection manager provides a FCFS based resource allocation protocol so that the agent who desires to pass through the intersection earlier will pass earlier, and if both desire to pass at the same time, then both have the same chance to pass first. To this end, the agents report their desired passing times to the intersection manager and the manager allocates the resources accordingly [1]. We note that, here, in order to increase the efficiency of the intersection usage, the request of two agents are evaluated together, which is different from the proposed approach in [1], where the agents’ requests are evaluated one by one. However, while the evaluations of more than one request can increase the efficiency, in a non-cooperative environment, the agents can also report strategically, e.g., they may not reveal their true desired passing times, in order to minimize the deviation of the times that the manager allows them to use the intersection from their desired passing times. Hence, we aim to formulate the strategic behavior of the agents in this non-cooperative environment. Furthermore, instead of any Nash equilibrium as in [3], we seek to select the socially optimal one among multiple equilibria, while designing the intersection control mechanism.

The main contributions of the paper are as follows:

The rest of this paper is organized as follows: In Section II, we formulate the problem for two strategic autonomous agents and a single intersection resource. In Section III, we analyze the equilibrium scenarios in a strategic environment. We provide a strategy-proof intersection mechanism, where the agents reveal their private information truthfully, in Section IV. We conclude the paper with several remarks in Section V. Appendices include proofs of technical results.

Each agent-i, for i=1,2, has access to private information: θe,i,θd,i∈Θ, denoting the earliest possible and the desired passing times through the intersection, respectively, where Θ⊂R is a totally ordered finite set such that for any consecutive elements θ,θ′∈Θ we have |θ−θ′|=Δ and for all θ∈Θ, θ–≤θ≤¯θ, where θ– and ¯θ are specified upper and lower bounds, respectively, with, e.g., θ–=0. Δ can be viewed as the highest precision for time reporting. Each agent needs certain amount of time while passing through the intersection, which is denoted by δt∈Θ, and we assume that δt/2∈Θ.

Agents report their passing times and the manager controls the intersection usage according to FCFS protocol. In particular, if agents report ^θ1>^θ2, then the allocated times would be given by t2=^θ2, since agent-2 comes to intersection first, and t1=max{^θ1,t2+δt+Δ}. Furthermore, in case of equality, i.e., ^θ1=^θ2, the manager allocates the intersection to one of them first randomly, e.g., by flipping a fair coin, for the sake of fairness. Therefore, for given reported times (^θ1,^θ2), the protocol computes the corresponding allocated times, i.e., (t1,t2)=FCFS(^θ1,^θ2), uniquely.

We consider that the agents are identical and have payoff functions penalizing the deviation of the allocated times ti from the desired passing times θd,i:

where c:R→R is a strictly increasing, strictly convex function on [0,∞), e.g., c(x)=x2. We consider Nash equilibrium [5], in which agents do not have any incentive to change their actions unilaterally, and an agent has an incentive to change his/her action if he/she can have a reduced payoff. Therefore, an action pair (^θ′1,^θ′2) leads to an equilibrium provided that

where (t1,t2)=FCFS(^θ1,^θ2). In the next section, we examine these equilibrium scenarios in detail.

Without loss of generality, we can consider that θd,1 is earlier than or equal to θd,2, i.e., θd,1≤θd,2. In such cases, if both agents reveal their desired times truthfully and θd,1<θd,2, agent-1 would pass through the intersection first at his/her desired time θd,1 and agent-2 would pass at the time max{θd,1+δt+Δ,θd,2}, and if θd,1=θd,2 then both agents would have equal chances to pass through the intersection first. However, the agents are strategic and a strategic agent would reveal the information truthfully if it is the best strategy according to his/her objective, e.g., minimizing the payoff function (1).

We point out that the agents do not have conflicting interests if θd,1+δt<θd,2. Hence in such cases, the agents would report their desired passing times truthfully and the manager would be able to allocate the intersection exactly at their reported times. Otherwise the agents have conflicting interests and in those cases, truthfulness is not an equilibrium achieving strategy for the agents in general. In that respect, the following cases lead to interesting equilibrium scenarios, e.g., even though θd,1<θd,2, agent-2 can incentivize agent-1 to report an earlier passing time than θd,1 and under certain conditions, the intersection might even be allocated to agent-2 first. Next, we examine these scenarios in detail.

Proof. The proof is provided in Appendix A. □

At equilibria of certain cases, interestingly, the reported time of the agents can even be less than their earliest passing time even if there is a regulation making sure that each agent must pass through the intersection at his/her allocated time. However, since the reported time can be different from the allocated time, even though that agent knows that he/she cannot pass through the intersection that early, by reporting in that way, he/she incentivizes the other agent to report a far earlier time such that his/her allocated time will not be the reported time. We also note that the deviation of this allocated time from the desired passing time can be less than the one when he/she has reported as early as the earliest passing time. Therefore, such equilibria can be more preferable for the agent that has a later desired passing time.

Proof. The proof is provided in Appendix B. □

Proof. The proof is provided in Appendix C. □

Proof. The proof is provided in Appendix D. □

Lemma 5. Let θe,1≤θd,1<θe,2≤θd,2≤θd,1+δt, then there exist multiple equilibria such that the equilibrium achieving action pairs are given by {^θ1=θ,^θ2=θ+Δ} provided that there exists θ∈Θ such that

Proof. The proof is provided in Appendix E. □

Based on Lemmas 1-5, we have the following proposition.

Proposition 1. There exists at least one pure equilibrium point in the two-agent intersection game.

Proof. As seen in Fig. 6, Lemmas 1-5 cover all the conflicting cases and at each case, there exists at least one pure equilibrium. Furthermore, if there are no conflicts, then truthfulness leads to pure unique equilibrium. □

Note that our social objective (3), as a mechanism designer, can lead to different allocations from the FCFS protocol. Particularly, the socially optimal allocated times would be given by the following minimization problem:

Remark 1. We emphasize that the socially optimal time allocations t∗1,t∗2 do not depend on the payoff functions directly due to the assumption that agents are identical and c(⋅) is a strictly increasing and strictly convex function. Therefore, as a mechanism designer, we do not need to know the exact payoff functions except the assumption about their structure.

The following theorem characterizes these allocations.

Proof. The proof is provided in Appendix F. □

Proof. These results follow from Theorem 1 and Lemmas 1-5. We select the equilibrium point within Tγ such that the corresponding time allocation is closest to the socially optimal allocation. □

Next, the following corollary provides a truthful mechanism for intersection control in strategic environments.

Proof. This follows from the revelation principle [7], which implies that the socially optimal equilibrium can be implemented by an incentive-compatible-direct-mechanism, in which both agents reveal their private information truthfully. The intersection mechanism already plays the best actions strategically for both agents, which lead to the corresponding socially optimal equilibrium; therefore the agents do not have any incentive to misreport their private information with the aim of reducing their own payoff function further. □

In this paper, we have studied the truthfulness of intersection control, when the intersection manager evaluates the requests of more than one agent, specifically two agents, in a non-cooperative environment. We analyze equilibria for the agents’ actions such that at an equilibrium, given that the other agent has taken that action against his/her action, he/she has no incentive to change his/her action unilaterally. We have formulated all equilibria for all possible scenarios. We have shown that there always exists a pure equilibrium and there even exist multiple pure equilibria in general. We have then characterized the socially preferable equilibrium within all the equilibria with respect to a certain social objective. Finally, we have designed a strategy-proof mechanism, where the agents cannot exploit the intersection control to get benefit in terms of their selfish objectives. We point out that the intelligent intersection control process in a non-cooperative environment even with two agents requires a careful consideration of all the possible cases with respect to earliest and desired passing times of the agents, and the time that the agents need to pass through the intersection. By formulating the strategy-proof mechanism, this paper has also provided a straight-forward, yet non-trivial, guideline to extend to scenarios where there are more than two agents.

Given that θd,1=θd,2=:θd and θe,1≤θe,2, we have the following cases, which are partially demonstrated in Fig. 1: i) If both θe,1 and θe,2 are less than or equal to θd−δt/2, there exists a unique pure equilibrium, where both agents report ^θ1=^θ2=θd−δt/2, and the intersection is allocated to one of the agents at θd−δt/2