Quantum information decoupling is an important quantum information processing task, which has found broad applications. In this paper, we characterize the performance of catalytic quantum information decoupling regarding the exponential rate under which perfect decoupling is approached, namely, the reliability function. We have obtained the exact formula when the decoupling cost is not larger than a critical value. In the situation of high cost, we provide upper and lower bounds. This result is then applied to quantum state merging and correlation erasure, exploiting their connection to decoupling. As technical tools, we derive the exponents for smoothing the conditional min-entropy and max-information, and we prove a novel bound for the convex-split lemma. Our results are given in terms of the sandwiched Rényi divergence, providing it with operational meanings in characterizing how fast the performance of quantum information tasks approach the perfect. 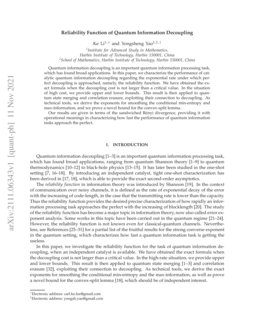 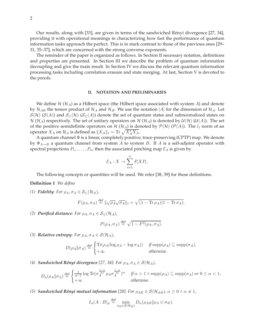 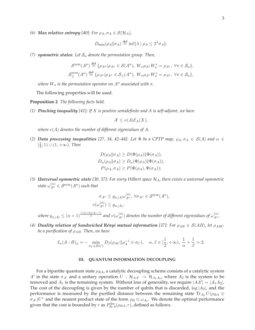 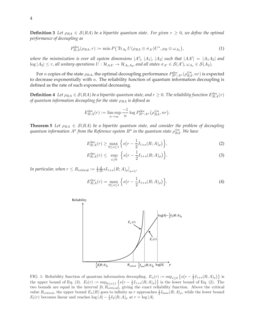 The max-relative entropy together with its smoothed version is a basic t...
Ke Li, et al. ∙

Entropy of a quantum channel

The von Neumann entropy of a quantum state is a central concept in physi...
Gilad Gour, et al. ∙

Update of a conditional probability by minimal divergence

The present paper investigates the situation that two events which are b...
Jan Naudts, et al. ∙

In this paper we study the spectral features, on fractal-like graphs, of...
Gamal Mograby, et al. ∙

The reliability function in information theory was introduced by Shannon Shannon1959probability . In the context of communication over noisy channels, it is defined as the rate of exponential decay of the error with the increasing of code-length, in the case that the transmitting rate is lower than the capacity. Thus the reliability function provides the desired precise characterization of how rapidly an information processing task approaches the perfect with the increasing of blocklength Gallager1965simple . The study of the reliability function has become a major topic in information theory, now also called error exponent analysis. Some works in this topic have been carried out in the quantum regime Holevo2000reliability ; Dalai2013lower ; DalaiWinter2017constant ; CHT2019quantum . However, the reliability function is not known even for classical-quantum channels. Nevertheless, see References KoenigWehner2009strong ; SharmaWarsi2013fundamental ; WWY2014strong ; GuptaWilde2015multiplicativity ; CMW2016strong ; MosonyiOgawa2017strong ; CHDH2020non for a partial list of the fruitful results for the strong converse exponent in the quantum setting, which characterizes how fast a quantum information task is getting the useless.

In this paper, we investigate the reliability function for the task of quantum information decoupling, when an independent catalyst is available. We have obtained the exact formula when the decoupling cost is not larger than a critical value. In the high-rate situation, we provide upper and lower bounds. This result is then applied to quantum state merging HOW2005partial ; HOW2007quantum ; ADHW2009mother and correlation erasure GPW2005quantum , exploiting their connection to decoupling. As technical tools, we derive the exact exponents for smoothing the conditional min-entropy and the max-information, as well as prove a novel bound for the convex-split lemma ADJ2017quantum , which should be of independent interest.

Our results, along with LiYao2021exponent , are given in terms of the sandwiched Rényi divergence MDSFT2013on ; WWY2014strong , providing it with operational meanings in characterizing how fast the performance of quantum information tasks approach the perfect. This is in stark contrast to those of the previous ones MosonyiOgawa2015quantum ; MosonyiOgawa2015two ; CMW2016strong ; HayashiTomamichel2016correlation ; MosonyiOgawa2017strong ; CHDH2020non , which are concerned with the strong converse exponents.

the tensor product of

A quantum channel Φ is a linear, completely positive, trace-preserving (CPTP) map. We denote by ΦA→B a quantum channel from system A to system B. If A is a self-adjoint operator with spectral projections P1,,…,Pn, then the associated pinching map EA is given by

The following concepts or quantities will be used. We refer Wilde2013quantum ; Tomamichel2015quantum for these definitions.

The following properties will be used.

For a bipartite quantum state ρRA, a catalytic decoupling scheme consists of a catalytic system A′ in the state σA′ and a unitary operation U:HAA′→HA1A2, where A2 is the system to be removed and A1 is the remaining system. Without loss of generality, we require |AA′|=|A1A2|

. The cost of the decoupling is given by the number of qubits that is discarded,

log|A2|, and the performance is measured by the purified distance between the remaining state TrA2U(ρRA⊗σA′)U∗ and the nearest product state of the form ρR⊗ωA1. We denote the optimal performance given that the cost is bounded by r as PdecR:A(ρRA,r), defined as follows.

Let ρRA∈S(RA) be a bipartite quantum state. For given r≥0, we define the optimal performance of decoupling as

For n copies of the state ρRA, the optimal decoupling performance PdecRn:An(ρ⊗nRA,nr) is expected to decrease exponentially with n. The reliability function of quantum information decoupling is defined as the rate of such exponential decreasing.

Let ρRA∈S(RA) be a bipartite quantum state, and r≥0. The reliability function EdecR:A(r) of quantum information decoupling for the state ρRA is defined as

Let ρRA∈S(RA) be a bipartite quantum state, and consider the problem of decoupling quantum information An from the Reference system Rn in the quantum state ρ⊗nRA. We have

In this section, we discuss several quantum information processing tasks related to decoupling. We define the respective optimal performance and reliability function for these tasks, and relate them to their counterparts for decoupling. Thus results similar to Theorem 5, as well as Proposition 20 and Proposition 21, are established for these tasks.

For a bipartite quantum state ρAR, we can use a random unitary channel EA on system A to erasure the correlation between A and R. In order to do so, a catalytic system can be added. Specifically, we can choose a catalytic state σA′ on catalytic system A′ and a random unitary channel ΛAA′ on system AA′ to make the purified distance between the resulting state ΛAA′(ρAR⊗σA′) and a certain product state of the form ρR⊗ωAA′ as small as possible. If the number of the unitaries in ΛAA′ is m, then the cost of this process is logm. The optimal performance given that the cost is bounded by r is denoted by PerasR:A(ρRA,r), defined as follows.

Let ρRA∈S(RA) be a bipartite quantum state. For given r≥0, we define the optimal performance of catalytic quantum correlation erasure as

where the minimization is over all system dimension |A′|, all states σA′∈S(A′), ωAA′∈S(AA′) and all random unitary channels ΛAA′ in the following form:

We define the reliability function of catalytic quantum correlation erasure.

Let ρRA∈S(RA) be a bipartite quantum state, and r≥0. The reliability function E\empherasR:A(r) of catalytic quantum correlation erasure for ρRA is defined as

Proof. We first prove PerasR:A(ρRA,2r)≤PdecR:A(ρRA,r). We let σA′, ωA1 and UAA′ be the states and the unitary operator which satisfy the conditions in Definition 3. Then we choose σA′ as the catalytic state for quantum correlation erasure of ρRA and construct a random unitary channel ΛAA′ as

where {UiA2}|A2|2i=1 are all the Heisenberg-Weyl operators on HA2 and log|A2|≤r. Hence, by the definition of PerasR:A(ρRA,2r), it can be evaluated as

where πA2 denotes the maximally mixed state on HA2. Because Eq. (11) holds for arbitrary σA′, ωA1 and UAA′ which satisfy the conditions in Definition 3, we have

Now we deal with the other direction. Let σA′, ωAA′, ΛAA′ be the states and the random unitary channel which satisfy the conditions in Definition 6. ΛAA′ can be written as

where logm≤2r. We introduce systems C and C′ such that |C|=|C′|=√m and denote by Ψm the maximally entangled state on C and C′. The catalytic state for decoupling ρAR can be chosen as

Set A1≡AA′C be the remaining system, and A2≡C′ be the discarded system. We can bound PdecR:A(ρRA,r) as follows.

where πC denotes the maximally mixed state on system C. Noticing that Eq. (14) holds for any σA′, ωAA′, ΛAA′ which satisfy the conditions in Definition 6, we have

Let ρABR be a tripartite pure state. Alice, Bob and a referee hold system A, B and R respectively. A quantum state merging protocol with quantum communication, M1, consists of using a shared bipartite entangled pure state ϕA′B′, Alice applying local unitary UAA′→A1A2 and sending the system A2 to Bob, Bob applying local unitary VA2BB′→ABB1 and they discarding systems A1 and B1. A CPTP map M2 is a quantum state merging protocol with classical communication if it consists of using a shared bipartite entangled pure state ψA′B′, applying local operation at Alice’s side, sending c classical bits from Alice to Bob and applying local operation to reproduce A and B at Bob’s side. The performances of both protocols are given by the purified distance between ρABR and the final state on the referee’s system R and Bob’s system A and B. The cost of state merging that we are concerned with, is the number of qubits or classical bits that Alice sends to Bob. We define the optimal performances PmergA⇒B(ρRAB,r) and PmergA→B(ρRAB,r), given that the cost is bounded by r, as follows.

The reliability function of quantum state merging can be defined similar to Definition 4.

Let ρABR∈S(ABR) be a tripartite pure state and r≥0. The reliability functions E\emphmergA⇒B(ρRAB,r) and E\emphmergA→B(ρRAB,r) of quantum state merging with quantum communication and classical communication respectively, are defined as

Catalytic decoupling plays an important role in quantum state merging. We have the following Proposition 11 and Proposition 12 on their optimal performances and reliability functions.

For a tripartite pure state ρABR∈S(ABR) and r≥0, we have

Proof. Let us prove PmergA⇒B(ρRAB,r)≤PdecR:A(ρRA,r) at first. We set σA′, ωA1, UAA′ to be a pair of states and a unitary operator which satisfy the conditions in Definition 3. Let σA′B′, ωA1B1 be the purification of σA′, ωA1 respectively. By Uhlmann’s theorem, there exists an unitary VA2BB′→AB1B such that

Let M1(ρABR)=TrA1B1VA2BB′→AB1BUAA′(ρABR⊗σA′B′)U∗AA′V∗A2BB′→AB1B, the cost of quantum communication of this protocol is log|A2|≤r. Hence, by the definition of PmergA⇒B(ρRAB,r) and Eq. (22), we have

Now, we turn to the proof of the other direction. Let M1 be a merging protocol with quantum communication whose cost does not exceed r. Then we can write M1 as

Because the purified distance decreases under the action of partial trace, we get

We choose ϕA′ as the catalytic state for decoupling ρAR and discard the system A2 after the action of the unitary operation UA¯A→A1A2. The cost of the decoupling is log|A2|≤r. Hence, by the definition of PdecR:A(ρRA,r) and Eq. (25), we have

For a tripartite pure state ρABR∈S(ABR) and r≥0, we have

Here Alice and a referee share a pure state ρRA and Alice hopes to send the A system to Bob with the assistance of unlimited entanglement and using noiseless quantum communication or classical communication as resource. It is obvious that this task is a special case of quantum state merging where Bob holds no side information. So, we can easily get the bound of its reliability function from Proposition 11 and it has a simpler formula involving only the Rényi entropy of one single system due to the following lemma.

Let ρRA∈S(RA) be a bipartite pure state and s≥0. Then we have

We prove a version of the covex-split lemma ADJ2017quantum , with a new bound in terms of the sandwiched Rényi divergence.

where Am/Ai denotes the composite system consisting of A1,A2,⋯,Ai−1,Ai+1,⋯,Am and [σ⊗(m−1)]Am/Ai is the product state σ⊗(m−1) on these m−1 systems. Let v=v(ρR⊗σA) denote the number of distinct eigenvalues of ρR⊗σA. Then for any 0<s≤1,

Proof. We use the shorthand ξi≡<span class