Relaxed Conditions for Secrecy in a Role-Based Specification 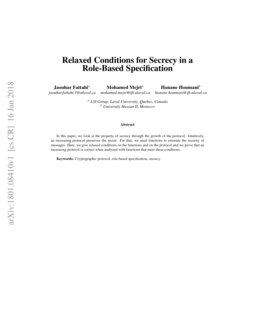 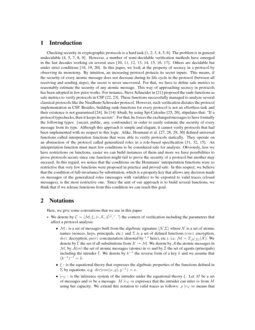 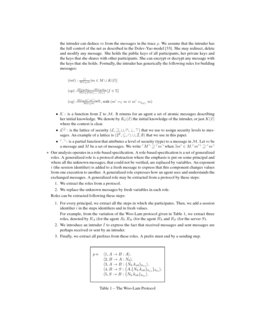 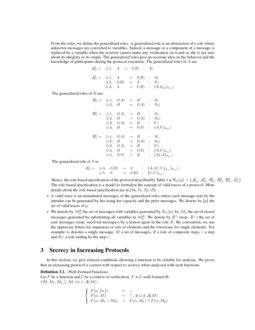 Secrecy by Witness-Functions on Increasing Protocols

In this work, we focus on the classical optical channel having Poissonia...
Masahito Hayashi, et al. ∙

Secrecy by Witness-Functions under Equational Theories

In this paper, we use the witness-functions to analyze cryptographic pro...
Jaouhar Fattahi, et al. ∙

Checking security in cryptographic protocols is a hard task [1, 2, 3, 4, 5, 6]. The problem is in general undecidable [4, 5, 7, 8, 9]. However, a number of semi-decidable verification methods have emerged in the last decades working on several axes [10, 11, 12, 13, 14, 15, 16, 17]. Others are decidable but under strict conditions [18, 19, 20]. In this paper, we look at the property of secrecy in a protocol by observing its monotony. By intuition, an increasing protocol protects its secret inputs. This means, if the security of every atomic message does not decrease during its life cycle in the protocol (between all receiving and sending steps), the secret is never uncovered. For that, we have to define safe metrics to reasonably estimate the security of any atomic message. This way of approaching secrecy in protocols has been adopted in few prior works. For instance, Steve Schneider in [21] proposed the rank-functions as safe metrics to verify protocols in CSP [22, 23]. These functions successfully managed to analyze several classical protocols like the Needham-Schroeder protocol. However, such verification dictates the protocol implementation in CSP. Besides, building rank-functions for every protocol is not an effortless task and their existence is not guaranteed [24]. In [14] Abadi, by using Spi-Calculus [25, 26], stipulates that: "If a protocol typechecks, then it keeps its secrets". For that, he forces the exchanged messages to have formally the following types: {secret, public, any, confounder} in order to easily estimate the security of every message from its type. Although this approach is simple and elegant, it cannot verify protocols that had been implemented with no respect to this logic. Alike, Houmani et al. [27, 28, 29, 30] defined universal functions called interpretation functions that were able to verify protocols statically. They operate on an abstraction of the protocol called generalized roles in a role-based specification [31, 32, 15]. An interpretation function must meet few conditions to be considered safe for analysis. Obviously, less we have restrictions on functions, easier we can build instances of them and more we have possibilities to prove protocols secure since one function might fail to prove the security of a protocol but another may succeed. In this regard, we notice that the conditions on the Houmanis’ interpretation functions were so restrictive that very few functions were proposed in practice and proved safe. In this respect, we believe that the condition of full-invariance by substitution, which is a property key that allows any decision made on messages of the generalized roles (messages with variables) to be exported to valid traces (closed messages), is the most restrictive one. Since the aim of our approach is to build several functions, we think that if we release functions from this condition we can reach this goal.

Here, we give some conventions that we use in this paper.

In this section, we give relaxed conditions allowing a function to be reliable for analysis. We prove that an increasing protocol is correct with respect to secrecy when analyzed with such functions.

(Well-Formed Function) Let F be a function and C be a context of verification. F is C-well-formed iff: ∀M,M1,M2⊆M,∀α∈A(M):

For an atom α in a set of messages M, a well-formed function returns the bottom value "⊥" if M={α} (clear). It returns the top value "⊤" if it does not appear in this set. It returns for it in the union of two sets, the minimum "⊓" of the two values calculated in each set separately.

A full-invariant-by-intruder F should be such that it it attributes a security level to a message α in M, the intruder can never produce from M another message m that decrease this level (i.e. F(α,m)⊒F(α,M)) except when α is intended to be known by the intruder (i.e. ┌K(I)┐⊒┌α┐).

(Reliable Function) Let F be a function and C be a context of verification. F is C-reliable iff : F is C−well-formed ∧F is C−% full-invariant-by-intruder.

A reliable function is simply a function that is well-formed and full-invariant-by-intruder in a given context of verification C.

(F-Increasing Protocol) Let F be a function, C be a context of verification and p be a protocol. p is F-increasing in C if: ∀R.r∈RG(p),∀σ∈Γ:X→Mp we have:

(Secret Disclosure) Let p be a protocol and C be a context of verification. We say that p discloses a secret α∈A(M) in C if:

A secret disclosure consists in manipulating a valid trace ρ by the intruder, using her knowledge K(I) in a context of verification C, to infer a secret α that she is not intended to know (┌K(I)┐⋣┌α┐).

See the proof 4 in  [35]. The lemma 3.6 states that for any atom α in a message generated by an increasing protocol, its security level calculated by a reliable function is always greater than its initial value given in the context, provided that the intruder is not initially allowed to know it. Indeed, initially the atom has a some security level. This level cannot be decreased by the intruder using her initial knowledge and received messages since a reliable function is full-invariant-by-intruder. In each new step of the evolution of the valid trace, involved messages are better protected since the protocol is increasing. The proof is run by induction on the size (evolution) of the trace and uses the properties of reliability of the function in every new step of the induction.

(Security of Increasing Protocols) Let F be a C-reliable function and p a F-increasing protocol.

p is C-correct with respect to secrecy.

Let’s suppose that p reveals some atomic secret α. From the definition 3.5 we have:

Since F is C-reliable and p is an F-increasing protocol, we have from the lemma 3.6:

As F is C-well-formed, we have:

(5) is not possible because it is opposite to: ┌K(I)┐⋣┌α┐ in (1). Conclusion: p is C-correct with respect to secrecy.

The theorem 3.7 states that an increasing protocol is correct with respect to secrecy when analyzed with a function that is well-formed and full-invariant by intruder, or shortly reliable. Compared to the conditions imposed by Houmani et al. in [27, 30] to their functions, we have one condition less. Indeed, Houmani et al. expect from a protocol to be increasing on the messages of generalized roles whatever the substitutions they may receive (when the protocol is running) and demanded from the interpretation function to resist to these substitutions. As a result, even if they gave a guideline to build reliable functions, just two functions could be really built: the function DEK and the function DEKAN. We notice as well that the function DEK is disappointing in practice. That is mainly due to the complexity to prove that a function satisfies the full-invariance by substitution property. In this paper, we release our functions from this hard condition in order to be more comfortable in building functions. We rehouse this condition in our new definition of an increasing protocol. The problem of substitution goes to the protocol and becomes relatively less difficult to handle. Our approach has in common with Schneider’s method and Houmani’s method the idea of transforming the problem of secrecy to a problem of protocol growth. All of these three approaches decide only if the protocol is proved increasing using a reliable function, as well.

Releasing a function from a condition may motivate us to undertake special cautions when using it. In a future work, we introduce the notion of witness-functions to analyze cryptographic protocols. A witness-function is a protocol-dependent function. It introduces new derivation techniques to solve the problem of substitution locally in the protocol. It supplies two bounds that are independent of all substitutions which enables any decision made on the generalized roles to be sent to valid traces. This replaces the restrictive condition of full-invariance by substitution in Houmani’s logic. The witness-functions were successful to prove secrecy in many protocols. They could even tell about flaws.