Off-policy learning is more unstable compared to on-policy learning in reinforcement learning (RL). One reason for the instability of off-policy learning is a discrepancy between the target (π) and behavior (b) policy distributions. The discrepancy between π and b distributions can be alleviated by employing a smooth variant of the importance sampling (IS), such as the relative importance sampling (RIS). RIS has parameter β∈[0, 1] which controls smoothness. To cope with instability, we present the first relative importance sampling-off-policy actor-critic (RIS-Off-PAC) model-free algorithms in RL. In our method, the network yields a target policy (the actor), a value function (the critic) assessing the current policy (π), and behavior policy. We use action value generated from the behavior policy to train our algorithm rather than from the target policy. We also use deep neural networks to train both actor and critic. We evaluated our algorithm on a number of Open AI Gym benchmark problems and demonstrate better or comparable performance to several state-of-the-art RL baselines. 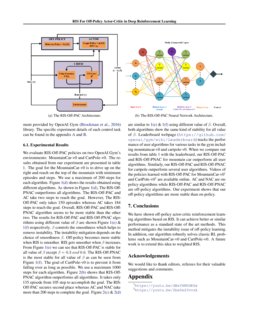 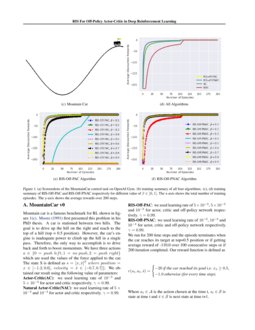 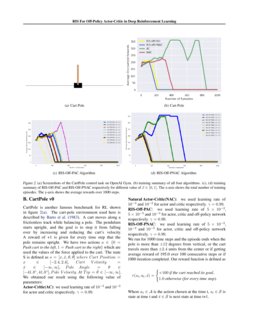 . On-policy method offers unbiased and stable but often suffer from high variance and sample inefficient. Off-policy methods are more sample efficient, safe but unstable. Neither on- nor off-policies are perfect. Therefore, several methods have been proposed to get rid of the deficiency of each policy. For example, how on-policy can achieve similar sample efficient as off-policy

Importance sampling is a well-known method for off-policy evaluation, permitting off-policy data to be used as if it were on-policy (Hanna et al., 2018). IS can be used to study one distribution while sampling from another (Owen, 2013). The degree of deviation of the target policy from the behavior policy at each time t is captured by the importance sampling ratio i.e. IS=π(At|St)b(At|St) (Precup et al., 2001)

Rest of the paper is arranged as follows. Related works are discussed in section 2. In section 3, we present Preliminaries. Section 4 & 5 show Importance Sampling and actor-critic model respectively. Section 6 presents experiments. Finally, we present a conclusion in section 7.

present a framework for prioritizing experience, so as to replay significant transitions more often, and thus learn more efficiently. Bounded actions introduce bias when the standard Gaussian distribution is used as a stochastic policy.

suggest using Beta distribution instead of Gaussian and examine the trade-off between bias and variance of policy gradient of both on- and off-policy.

Mnih et al. (2016) purpose four asynchronous deep RL algorithms. The most effective one is asynchronous advantage actor-critic (A3c), maintains a policy π(at|st;θ) and an estimated of the value function V(st;θv). Van Seijen & Sutton (2014) introduce a true online TD(λ) learning algorithm that is exactly equivalent to an online forward view and that empirically perform better than its standard counterpart in both prediction and control problems. Schulman et al. (2015a) develop an algorithm, called Trust Region Policy Optimization (TRPO) offers monotonic policy improvements and derives a practical algorithm with a better sample efficiency and performance. It is similar to natural policy gradient methods. Schulman et al. (2015b) develop a variance reduction method for policy gradient, called generalized advantage estimation (GAE) where a trust region optimization method used for the value function. Policy gradient of GAE significantly minimizes variance while maintaining an acceptable level of bias. We are interested in off-policy rather than on-policy.

Markov decision process (MDP) is a mathematical formulation of RL problems. MDP is defined by tuples of objects, consisting of (S,A,R,P,γ). where S is set of possible states, A is set of possible actions, R is distribution of reward given (state, action) pair, P

is transition probability i.e. distribution of next state given (state, action) pair and

γ∈(0,1] is discount factor. π and b denote target policy and behavior policy respectively. A policy (π or b) is a function from S to A that specifies what action to take in each state. An agent interacts with an environment over a number of discrete time steps in classical RL. At each time step t, the agent picks an action at∈A according to its policy (π or b) given its present state st∈S. In return, the agent gets the next state st+1∈S according to the transition probability P(st+1|st,at) and observes a scalar reward rt(st,at)∈R. The process carries on until the agent arrives a terminal state after which the process starts again. The agent outputs γ-discounted total accumulated return from each state st i.e. Rt=∞∑k≥0γkr(st+k,at+k). In RL, there are two typical function to select action following policy(π or b): state-action value (Qπ or b(st,at)=Est+1:∞,at+1:∞[Rt|st,at]) and state value (Vπ or b(st)=Eat[Qπ or b(st,at)|st]) function. E is expectation mean. Finally, the goal of the agent is to maximize the expected return Rt using policy gradient (J(θ))with respect to parameter θ. The policy gradient (Sutton et al., 1999) which taking notation from (Schulman et al., 2015b), is defined as:

Where Aπ(st,at) is an advantage function. Schulman et al. (2015b) shows that we use several expression in the place of Aπ(st,at) without introducing bias such as state-action value (Qπ or b(st,at)), the discounted return Rt or the temporal difference (TD) residual (rt+γVπ(st+1)−Vπ(st)). We use TD residual in our method. In reality, we use the neural network to estimate advantage function and this injects extra estimation errors and bias. A classic policy gradient approximators with Rt have a higher variance and lower bias whereas the approximators using function approximation have higher bias and lower variance (Wang et al., 2016). IS often has low bias but high variance (Sutton et al., 2016; Hachiya et al., 2009; Mahmood et al., 2014). We use RIS instead of IS. Merging advantage function with function approximation and RIS to achieve stable RL and also a trade-off between bias and variance is one of our main aims. Policy gradient with function approximation denotes actor-critic (Sutton et al., 1999) which optimize the policy against a critic,e.g. deterministic policy gradient (Silver et al., 2014; Lillicrap et al., 2015).

. For example, we would like to estimate the expected value of a random variable x with samples from the

π (target policy) distribution while in reality, samples are drawn from another distribution b (behavior policy). A classical form of importance sampling can be defined as:

The importance sampling estimate of μ = Eπ{x} is

Where the xi are samples drawn from b and ^μb estimator computes average of sample values.

Where β[0,1] controls the smoothness. The logarithm of the relative importance function μβ becomes the ordinary importance sampling eπ(a|s)eb(a|s) if β=0. It becomes smoother if β is increased, and it produces the uniform weight μβ=1 if β=1. This is our one of the main contribution.

is a consistent unbiased estimator of

a=μb(s) This estimator is unbiased, but it suffers from very high variance as it involves a product of many potentially unbounded importance weights (Wang et al., 2016; Hachiya et al., 2009).

As can be seen from the above, the agent uses action generated by behavior policy instead of target policy in our method. The approximated value function is trained to minimize the squared TD residual error.

Critic updates action-value function parameters ϕ. Actor Updates policy parameters θ, in the direction, recommended by the critic. The actor selects which action to take, and the critic conveys the actor how good its action was and how it should adjust. In practice, we use an approximate TD error (δVπϕ) to compute the policy gradient. The discounted TD residual (δVπϕ) can be used to establish policy gradient estimator in the following form.

Our aim is to reduce instability into off-policy. The imbalance between bias and variance (large bias and large variance or small bias and large variance) is often likely to make off-policy unstable. IS reduces bias but introduces high variance. The reason is that IS ratio fluctuates greatly from sample to sample and IS averages the xiπ(xi)b(xi), which is of high variance, thus, a smooth variant of IS is required to mitigate high variance (high variance is directly proportional to instability) such as RIS. RIS has bounded variance and low bias. It has been proven by theorem 1 because RIS is bounded i.e. μβ≤1β, thus, variance of RIS is also bounded. IS reduces bias and RIS is a smooth variant of IS, thus, RIS also reduces bias (Hachiya et al., 2009; Gu et al., 2017; Mahmood et al., 2014; Sugiyama, 2016). Therefore, to minimize bias while maintaining bounded variance, we use off-policy case, where (J(θ)) can be estimated using action drawn from b(a|s) in place of π(a|s) and combine RIS ratio μβ with ^J(θ) which we call RIS-Off-PAC.

are on-policy while our algorithms are off-policy. In RL, we want to maximize the rewards, thus, the optimization problem we consider here is a maximization instead of a minimization. So, we actual minimize the negative loss function, the negative of minimum loss function return maximum reward in the original problem.

Figure 1(a) shows the RIS-Off-PAC architecture. The difference between RIS-Off-PAC and traditional actor-critic architecture (Sutton et al., 1999; Sutton & Barto, 2005) is that we introduce behavior policy and RIS in our method, use action generated by b(A|S) instead of π(A|S) and our method is off-policy. We compute RIS using both π(A|S) and b(A|S) policy into Actor, therefore, we pass samples from b(A|S) to the actor as shown in figure 1(a). TD error and others are same as a traditional actor-critic method. Figure 1(b)

shows the RIS-Off-PAC neural network (NN) architecture. We use classical RL task: MountainCar and CartPole for our experiment. We apply our RIS-Off-PAC-NN on both of this tasks. Details of our NN as follows: In our architecture, we have a target network (Actor), value network (Critic) and off-policy network (behavior policy). Each of them implemented as a fully connected layer using Tensorflow as shown in figure

β is generated uniform random value between 0 and 1.

We conduct experiments on two Open AI Gym classic control tasks: MountainCar-v0 and CartPole v0. Our experiments run on a single machine with 16 GB memory, Intel Core i7-2600 cpu and no GPU. We use operating system: 64-bit Ubuntu 18.04.1 LTS, programming language: python 3.6.4, library: Tensorflow 1.7 and OpenAI Gym (Brockman et al., 2016). For all experiment, we use simulated environment provided by OpenAI Gym (Brockman et al., 2016) library. The specific experiment details of each control task can be found in the appendix A and B.

We have shown off-policy actor-critic reinforcement learning algorithms based on RIS. It can achieve better or similar performance as a standard state of the art methods. This method mitigates the instability issue of off-policy learning. In addition, our algorithm robustly solves classic RL problems such as MountainCar-v0 and CartPole-v0. A future work is to extend this idea to weighted RIS.

We would like to thank editors, referees for their valuable suggestions and comments.