In this paper the exact linear relation between the leading eigenvector of the unnormalized modularity matrix and the eigenvectors of the adjacency matrix is developed. Based on this analysis a method to approximate the leading eigenvector of the modularity matrix is given, and the relative error of the approximation is derived. A complete proof of the equivalence between normalized modularity clustering and normalized adjacency clustering is also given. A new metric is defined to describe the agreement of two clustering methods, and some applications and experiments are given to illustrate and corroborate the points that are made in the theoretical development. 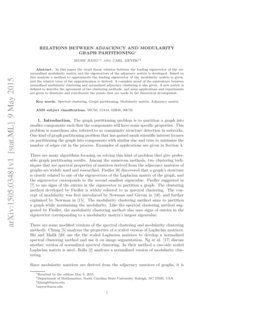 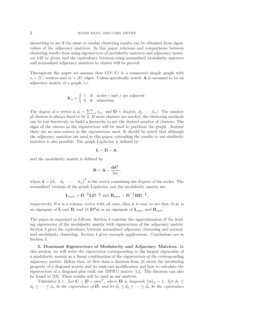 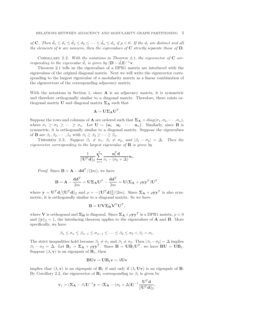 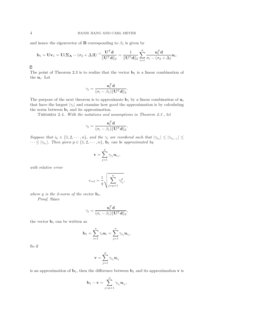 The graph partitioning problem is to partition a graph into smaller components such that the components will have some specific properties. This problem is sometimes also referred to as community structure detection in networks. One kind of graph partitioning problem that has gained much scientific interest focuses on partitioning the graph into components with similar size and tries to minimize the number of edges cut in the process. Examples of applications are given in Section 4. There are many algorithms focusing on solving this kind of problem that give preferable graph partitioning results. Among the numerous methods, two clustering techniques that use spectral properties of matrices derived from the adjacency matrices of graphs are widely used and researched. Fiedler [6]

discovered that a graph’s structure is closely related to one of the eigenvectors of the Laplacian matrix of the graph, and the eigenvector corresponds to the second smallest eigenvalue. Fiedler suggested in

to use signs of the entries in the eigenvector to partition a graph. The clustering method developed by Fiedler is widely referred to as spectral clustering. The concept of modularity was first introduced by Newman and Girvan in

The degree of a vertex is di=∑ni=1aji, and D=diag(d1,d2,⋯,dn). The number of clusters is always fixed to be 2. If more clusters are needed, the clustering methods can be run iteratively to build a hierarchy to get the desired number of clusters. The signs of the entries in the eigenvectors will be used to partition the graph. Assume there are no zero entries in the eigenvectors used. It should be noted that although the adjacency matrices are used in this paper, extending the results to use similarity matrices is also possible. The graph Laplacian is defined by

and the modularity matrix is defined by

is the vector containing the degrees of the nodes. The normalized versions of the graph Laplacian and the modularity matrix are

respectively. If e is a column vector with all ones, then it is easy to see that (0,e) is an eigenpair of L and B, and (0,D12e) is an eigenpair of Lsym and Bsym. The paper is organized as follows. Section 2 contains the approximation of the leading eigenvector of the modularity matrix with eigenvectors of the adjacency matrix. Section 3 gives the equivalence between normalized adjacency clustering and normalized modularity clustering. Section 4 gives example applications. Conclusions are in Section 5.

is an adjacency matrix, it is symmetric and therefore orthogonally similar to a diagonal matrix. Therefore, there exists orthogonal matrix

U and diagonal matrix ΣA such that

Suppose the rows and columns of A are ordered such that ΣA=diag(σ1,σ2,⋯,σn), where σ1≥σ2≥⋯≥σn. Let U=(u1u2⋯un). Similarly, since B is symmetric, it is orthogonally similar to a diagonal matrix. Suppose the eigenvalues of B are β1,β2,⋯,βn with β1≥β2≥⋯≥βn.

Suppose β1≠σ1, β1≠σ2, and |β1−σ2|=Δ. Then the eigenvector corresponding to the largest eigenvalue of B is given by

where y=UTd/∥UTd∥2 and ρ=−∥UTd∥22/(2m). Since ΣA+ρyyT is also symmetric, it is orthogonally similar to a diagonal matrix. So we have

where V is orthogonal and ΣB is diagonal. Since ΣA+ρyyT is a DPR1 matrix, ρ<0 and ∥y∥2=1, the interlacing theorem applies to the eigenvalues of A and B. More specifically, we have

The point of Theorem 2 is to realize that the vector b1 is a linear combination of the ui. Let

The purpose of the next theorem is to approximate b1 by a linear combination of ui that have the largest |γi| and examine how good the approximation is by calculating the norm between b1 and its approximation.

With the notations and assumptions in Theorem 2 , let

the vector b1 can be written as

because the ui are orthonormal. So if q is the 2-norm of the vector b1, then the relative error of the approximation is

The utility of this error helps us gauge the number of terms that are required to obtain a given level of accuracy when approximating the dominant eigenvector of the modularity matrix with eigenvectors of the adjacency matrix.

The proof of the theorem is obtained by combining the following two observations. The second observation needs more lines to explain so we write it as a lemma.

Note that P is an outer product and P≠0, so rank(P)=1. Because E=D−12PD−12 is congruent to P, E and P have the same number of positive, negative and zero eigenvalues by Sylvester’s law [14]. Therefore rank(E)=rank(P)=1. To prove Eu=0, it is sufficient to prove u is in the nullspace of E.

Let e be the vector such that all its entries are one. Observe that

4 Some Applications and Experiments

To corroborate the theoretical results obtained in the previous sections, experiments were conducted with three well-known data sets. In the following experiments the effects of the units are first eliminated by normalizing each variable by the 2-norm if necessary, then the Gaussian similarity function is applied to the data to generate a similarity matrix S. The parameters in the similarity function used for different data sets are different, and will be specified individually. The mean, s, of all off-diagonal entries in S is computed and the adjacency matrix is formed by

We used three popular data sets from the literature, and they are described below.

The wine recognition data from the UCI data repository [12] is one of the most famous data sets used in data mining [8][10][18]. The data set is a result of chemical analysis of wines growing in the same region. The difference between the wines is that they are derived from three different cultivars. The data contains 178 wine samples, the labels of the samples that tell which kind of wine each sample is and 13 variables from chemical analysis. In the experiments the data of the first two kinds of wines are used to generate a similarity matrix. A good clustering method should be able to put samples from the same classes into the same clusters. To build the similarity matrix, the Gaussian similarity function with σ=0.1 is used.

The Breast Cancer Wisconsin Data Set [13] is a widely used data in classification and clustering [1] and it can be downloaded from the UCI data repository. The data contains 699 instances and 9 attributes. The attributes are measurements of the sample tissues. Each data has a label to indicate whether the tissue is benign or malignant. The data contains 16 instances that has missing values in the attributes, and the missing values are replaced by zeros in the experiments. To build the similarity matrix, the Gaussian similarity function with σ=0.1 is used.

[11][25][9][4][19]. The original data contains a training set of 60,000 handwritten digits from 44 writers. One subset used in the experiments contains some of the digits 1 and 7, and the other subset contains some of the digits 2 and 3111The data can be downloaded at http://www.kaggle.com/c/digit-recognizer/data. Each piece of data is a row vector converted from a grey-scale image. Each image is 28 pixels in height and 28 pixels in width, so there are 784 pixels in total. Each row vector contains the label of the digit and the lightness of each pixel. Lightness of a pixel is represented by a number from 0 to 255 inclusively, and smaller numbers represent lighter pixels. To build the similarity matrix, the Gaussian similarity function with σ=1,000 is used.

In other words this is the percentage of agreement between M1 and M2. Because different clustering method may give different labels to a cluster, the max function is used in the definition. If M2 is the known “ground” truth of the clusters, then the CSR between M1 and M2 is as the same as the accuracy of M1. It should be noted that the CSR is not relevant to the accuracy of the clustering methods unless one of them is the ground truth.

The experimental results are in the tables below. Table 1 contains the number of data points in each data set and the accuracy of each clustering method when applied on the data sets. The symbols L, B and Lsym in the table represent the unnormalized spectral clustering, unnormalized modularity clustering and normalized spectral clustering, respectively. These clustering results are used as the benchmarks. Note that by Theorem 3, the clustering results from using Lsym and Bsym are the same. The columns Ap use the approximations described in Theorem 2 with the first p eigenvectors of the adjacency matrix to do clustering. In Table 2, the CSRs between the leading eigenvector of B and its approximations are computed, and the largest four magnitudes of γij described in Theorem 2 are listed.