Detecting visual relationships between people and clothing in an image has been a relatively unexplored problem in the field of computer vision and biometrics. The lack readily available public dataset for “worn” and “unworn” classification has slowed the development of solutions for this problem. We present the release of the Relatable Clothing Dataset which contains 35287 person-clothing pairs and segmentation masks for the development of “worn” and “unworn” classification models. Additionally, we propose a novel soft attention unit for performing “worn” and “unworn” classification using deep neural networks. The proposed soft attention models have an accuracy of upward 98.55%± 0.35% on the Relatable Clothing Dataset and demonstrate high generalizable, allowing us to classify unseen articles of clothing such as high visibility vests as “worn” or “unworn”. 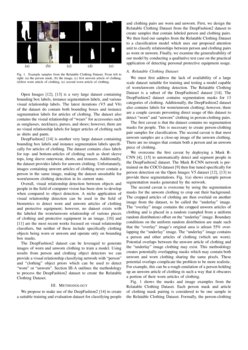 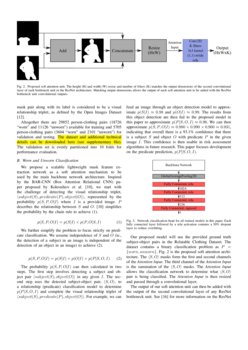 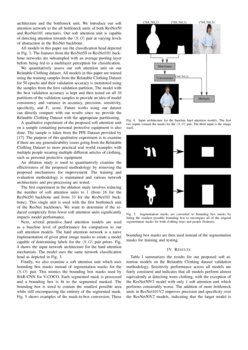 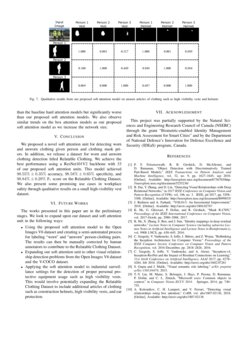 For many computer vision applications such as image description and huma...
Nikolaos Sarafianos, et al. ∙

Who's Waldo? Linking People Across Text and Images

The hair and beauty industry is one of the fastest growing industries. T...
Taewoo Kim, et al. ∙

Type Anywhere You Want: An Introduction to Invisible Mobile Keyboard

Visual relationship detection for “worn” and “unworn” clothing suffers from a lack of labeled datasets. In particular, there is currently no publicly available large dataset containing labels pertaining to worn and unworn clothing relationships amongst people-clothing pairs in an image. This is a major detriment as many of the developed solutions for object and visual relationship detection rely on deep learning methods and require large datasets to achieve performance acceptable for industry application. A basic classification system capable of classifying worn and unworn clothing and equipment would provide a strong backbone for advanced workplace safety surveillance systems.

This paper aims to contribute the following to the development and application of state-of-the-art clothing and person relationship detectors for use in industrial settings:

The paper is organized as follows: Section II covers literature related to visual relationship detection datasets and clothing datasets which could be used for “worn” and “unworn” people-clothing pair classification. Section III details the development of the Relatable Clothing Dataset and our proposed soft attention models. Section IV summarize the results of our proposed model. Sections V and VI concludes our paper and outlines the research to be done in the immediate future.

Verbs in COCO (V-COCO) is the most commonly used dataset for visual relationship detection [8, 9]. This dataset contains labels for people, objects, and verbs such as looking, riding, eating, and drinking. This dataset does not contain any labels for clothing and whether they are worn or unworn. Moreover, the dataset is focused on bounding box labels for objects and relationships (as opposed to instance segmentation labels). Recent works [10] and [11] propose novel attention mechanisms to perform visual relationship detection on this dataset.

The DeepFashion2 dataset can be leveraged to generate images of worn and unworn clothing to train a model. Using results from person and clothing object detectors we can provide a visual relationship classifying network with “person” and “clothing” object priors which can be used to detect “worn” or “unworn”. Section III-A outlines the methodology to process the DeepFashion2 dataset to create the Relatable Clothing Dataset.

We propose to make use of the DeepFashion2 [14] to create a suitable training and evaluation dataset for classifying people and clothing pairs are worn and unworn. First, we design the Relatable Clothing Dataset from the DeepFashion2 dataset to create samples that contain labeled person and clothing pairs. We then feed our samples from the Relatable Clothing Dataset to a classification model which uses our proposed attention unit to classify relationships between person and clothing pairs as worn or unworn. Finally, we examine the generalizability of our model by conducting a qualitative test case on the practical application of detecting personal protective equipment usage.

The first caveat is that the dataset contains no segmentation masks for people. This is necessary to create person-clothing pair samples for classification. The second caveat is that most unworn samples are a close-up image of the unworn clothing. There are no images that contain both a person and an unworn piece of clothing.

We overcome the first caveat by deploying a Mask R-CNN [4, 15] to automatically detect and segment people in the DeepFashion2 dataset. The Mask R-CNN network is pre-trained on the COCO dataset [9] then fine tuned specifically for person detection on the Open Images V5 dataset [12, 13] to provide these segmentations. Fig. 1(a) shows example person segmentation masks generated by the network.

Fig. 1 shows the masks and image examples from the Relatable Clothing Dataset. Each person mask and article of clothing mask pairing is considered to be one sample in the Relatable Clothing Dataset. Formally, the person-clothing mask pair along with its label is considered to be a visual relationship triplet, as defined by the Open Images Dataset [12].

Altogether there are 29852 person-clothing pairs (18726 “worn” and 11126 “unworn”) available for training and 5705 person-clothing pairs (3604 “worn” and 2101 “unworn”) for validation and testing. The dataset and additional technical details can be downloaded here (see supplementary file). The validation set is evenly partitioned into 10 folds for performance evaluation.

We propose a scalable lightweight mask feature extraction network as a soft attention mechanism to be used by the main backbone network architecture. Inspired by the BAR-CNN (Box Attention Relational CNN) paper proposed by Kolesnikov et al. [10], we start with the challenge of detecting the visual relationship triplet, ⟨subject(S),predicate(P),object(O)⟩

, represented by the probability

p(S,P,O|I) where I is a provided image. P describes the relationship between S and O. [10]

simplifies the probability by the chain rule to achieve (

The probability p(S,P,O|I) can then calculated in two steps. The first step involves detecting a subject and object pair ⟨subject(S),object(O)⟩ in any given I. The second step uses the detected subject-object pair, ⟨S,O⟩, to a relationship (predicate) classification model to determine p(P|S,O,I) and complete the visual relationship triplet of ⟨subject(S),predicate(P),object(O)⟩. For example, we can feed an image through an object detection model to approximate p(S|I)≈0.98 and p(O|I)≈0.99. The results from this object detection are then fed to the proposed model in this paper to approximate p(P|S,O,I)≈0.96. We can then approximate p(S,P,O|I)≈0.980×0.990×0.960≈0.931, indicating that overall there is a 93.1% confidence that there is a subject S and object O with predicate P in the given image I. This confidence is then usable in risk assessment algorithms in future research. This paper focuses development on the predicate prediction, p(P|S,O,I).

All models in this paper use the classification head depicted in Fig. 3. The features from the ResNet50 or ResNet101 backbone networks are subsampled with an average pooling layer before being fed to a multilayer perception for classification.

We quantitatively assess our soft attention unit on our Relatable Clothing dataset. All models in this paper are trained using the training samples from the Relatable Clothing Dataset for 50 epochs and their validation accuracy is monitored using the samples from the first validation partition. The model with the best validation accuracy is kept and then tested on all 10 partitions of the validation samples to provide an idea of model consistency and variance in accuracy, precision, sensitivity, specificity, and F

1 score. Future works using our dataset can directly compare with our results since we provide the Relatable Clothing Dataset with the appropriate partitioning.

A qualitative experiment of the proposed soft attention unit on a sample containing personal protective equipment is also done. The sample is taken from the PPE Dataset provided by [17]. The purpose of this qualitative experiment is to examine if there are any generalizability issues going from the Relatable Clothing Dataset to more practical real world examples with multiple people wearing multiple different articles of clothing, such as personal protective equipment.

An ablation study is used to quantitatively examine the effectiveness of the proposed methodology by removing the proposed mechanisms for improvement. The training and evaluation methodology is maintained and various network architectures and pre-processing are tested.

Next, several primitive hard attention models are used as a baseline level of performance for comparison to our soft attention models. The hard attention network is a naive implementation of given prior image masks to create a model capable of determining labels for the ⟨S,O⟩ pair priors. Fig. 4 shows the input network architecture for the hard attention mechanism. The model uses the same network classification head as depicted in Fig. 3.

Table I summarizes the results for our proposed soft attention models on the Relatable Clothing dataset validation methodology. Sensitivity performance across all models are fairly consistent and indicates that all models perform almost equivalently at detecting worn clothing, with the exception of the ResNet50V2 model with only 1 soft attention unit which performs consierably worse. The addition of more bottleneck units in ResNet101V2 improves precision and specificity over the ResNet50V2 models, indicating that the larger model is less likely to classify unworn clothing as being worn and correctly classifying unworn articles of clothing more often. We also observe that the addition of additional soft attention units mostly sees small improvements across all metrics at the expense of additional training parameters. Highlighted cells indicate the best performance achieved in evaluation.

shows the Receiving Operating Characteristics curve for our proposed models on the validation set of the Relatable Clothing Dataset. All models perform very well, with

Fig. 7 shows a more qualitative example of the performance of our proposed soft attention models. Along the rows are the person mask inputs and along the columns are the articles of clothing. The value in each cell is the confidence of our proposed model that the article of clothing in the cell column is being worn by the person of the cell row. This confidence can be interpreted as p(P|S,O,I). In total, there are three high visibility vests and three construction helmets being worn in the input image. There are three people, each wearing a single high visibility vest and a single construction helmet. The proposed model has a very high confidence when classifying articles of clothing that are labeled as worn, rounding to 1.000 at three decimal places and correctly classifying all worn articles of clothing as “worn”. It is interesting to note that the Relatable Clothing Dataset does not contain any headwear, but all “worn” construction helmets are properly classified to their respective person with high confidence. Unfortunately, the model outputs some highly variant confidence values for “unworn” articles of clothing and would perform poorly on the ROC curve.

Table II summarizes the results for the baseline hard attention models. The ResNet backbones perform best in most metrics, but only marginally.

We proposed a novel soft attention unit for detecting worn and unworn clothing given person and clothing mask priors. In addition, we release a dataset for worn and unworn clothing detection titled Relatable Clothing. We achieve the best performance using a ResNet101V2 backbone with 33 of our proposed soft attention units. This model achieved 98.55%±0.35% accuracy, 98.58%±0.65% specificity, and 98.84%±0.29% F1 score on the Relatable Clothing Dataset. We also present some promising use cases in workplace safety through qualitative results on a small high-visibility vest dataset.

The works presented in this paper are in the preliminary stages. We look to expand upon our dataset and soft attention unit in the following ways:

This project was partially supported by the Natural Sciences and Engineering Research Council of Canada (NSERC) through the grant “Biometric-enabled Identity Management and Risk Assessment for Smart Cities” and by the Department of National Defence’s Innovation for Defence Excellence and Security (IDEaS) program, Canada.