This letter proposes a novel reinforcement learning method for the synthesis of a control policy satisfying a control specification described by a linear temporal logic formula. We assume that the controlled system is modeled by a Markov decision process (MDP). We transform the specification to a limit-deterministic Büchi automaton (LDBA) with several accepting sets that accepts all infinite sequences satisfying the formula. The LDBA is augmented so that it explicitly records the previous visits to accepting sets. We take a product of the augmented LDBA and the MDP, based on which we define a reward function. The agent gets rewards whenever state transitions are in an accepting set that has not been visited for a certain number of steps. Consequently, sparsity of rewards is relaxed and optimal circulations among the accepting sets are learned. We show that the proposed method can learn an optimal policy when the discount factor is sufficiently close to one. 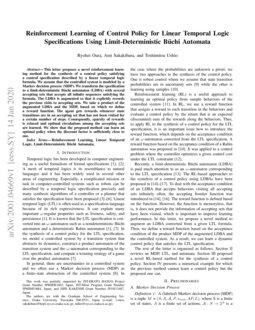 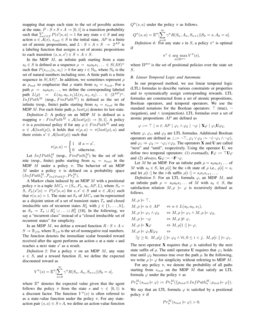 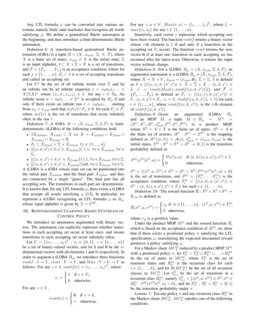 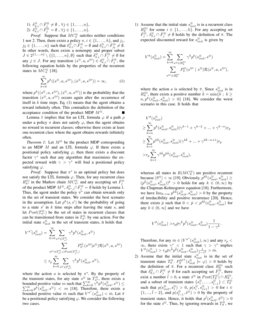 Temporal logic has been developed in computer engineering as a useful formalism of formal specifications [1, 2]. A merit of temporal logics is its resemblance to natural languages and it has been widely used in several other areas of engineering. Especially, a complicated mission or task in computer-controlled systems such as robots can be described by a temporal logic specification precisely and many synthesis algorithms of a controller or a planner that satisfies the specification have been proposed [3, 4, 5, 6]. Linear temporal logic (LTL) is often used as a specification language because of its rich expressiveness. It can explain many important ω-regular properties such as liveness, safety, and persistence [1]. It is known that the LTL specification is converted into an ω-automaton such as a nondeterministic Büchi automaton and a deterministic Rabin automaton [1, 7]. In the synthesis of a control policy for the LTL specification, we model a controlled system by a transition system that abstracts its dynamics, construct a product automaton of the transition system and the ω-automaton corresponding to the LTL specification, and compute a winning strategy of a game over the product automaton [7].

. In the case where the probabilities are unknown a priori, we have two approaches to the synthesis of the control policy. One is robust control where we assume that state transition probabilities are in uncertainty sets

Reinforcement learning (RL) is a useful approach to learning an optimal policy from sample behaviors of the controlled system [11]. In RL, we use a reward function that assigns a reward to each transition in the behaviors and evaluate a control policy by the return that is an expected (discounted) sum of the rewards along the behaviors. Thus, to apply RL to the synthesis of a control policy for the LTL specification, it is an important issue how to introduce the reward function, which depends on the acceptance condition of an ω-automaton converted from the LTL specification. A reward function based on the acceptance condition of a Rabin automaton was proposed in [10]. It was applied to a control problem where the controller optimizes a given control cost under the LTL constraint [12].

Recently, a limit-deterministic Büchi automaton (LDBA) is paid much attention to as an ω-automaton corresponding to the LTL specification [13]. The RL-based approaches to the syntehsis of a control policy using LDBAs have been proposed in [14, 15, 16, 17]. To deal with the acceptance condition of an LDBA that accepts behaviors visiting all accepting sets infinitely often, the accepting frontier function was introduced in [14, 16]. The reward function is defined based on the function. However, the function is memoryless, that is, it does not provide the information of accepting sets that have been visited, which is important to improve learning performance. In this letter, we propose a novel method to augment an LDBA converted from a given LTL formula. Then, we define a reward function based on the acceptance condition of the product MDP of the augmented LDBA and the controlled system. As a result, we can learn a dynamic control policy that satisfies the LTL specification.

The rest of the letter is organized as follows. Section II reviews an MDP, LTL, and automata. Section III proposed a novel RL-based method for the synthesis of a control policy. Section IV presents a numerical example for which the previous method cannot learn a control policy but the proposed one can.

In the MDP M, an infinite path starting from a state s0∈S is defined as a sequence ρ = s0a0s1… ∈S(AS)ω such that P(si+1|si,ai)>0 for any i∈N0, where N0 is the set of natural numbers including zero. A finite path is a finite sequence in S(AS)∗. In addition, we sometimes represent ρ as ρinit to emphasize that ρ starts from s0=sinit. For a path ρ = s0a0s1…, we define the corresponding labeled path L(ρ) = L(s0,a0,s1)L(s1,a1,s2)…∈(2AP)ω. InfPathM (resp., FinPathM) is defined as the set of infinite (resp., finite) paths starting from s0=sinit in the MDP M. For each finite path ρ, last(ρ) denotes its last state.

A Markov chain induced by an MDP

In an MDP M, we define a reward function R:S×A×S→R≥0, where R≥0 is the set of nonnegative real numbers. The function denotes the immediate scalar bounded reward received after the agent performs an action a at a state s and reaches a next state s′ as a result.

For a policy π on an MDP M, any state s∈S, and a reward function R, we define the expected discounted reward as

For any state s in S, a policy π∗ is optimal if

where Πpos is the set of positional policies over the state set S.

In our proposed method, we use linear temporal logic (LTL) formulas to describe various constraints or properties and to systematically assign corresponding rewards. LTL formulas are constructed from a set of atomic propositions, Boolean operators, and temporal operators. We use the standard notations for the Boolean operators: ⊤ (true), ¬ (negation), and ∧ (conjunction). LTL formulas over a set of atomic propositions AP are defined as

For an LTL formula φ, an MDP M, and an infinite path ρ=s0a0s1… of M with s0∈S, the satisfaction relation M,ρ⊨φ is recursively defined as follows.

The next operator X requires that φ is satisfied by the next state suffix of ρ. The until operator U requires that φ1 holds true until φ2 becomes true over the path ρ. In the following, we write ρ⊨φ for simplicity without referring to MDP M.

For any policy π, we denote the probability of all paths starting from sinit on the MDP M that satisfy an LTL formula φ under the policy π as

Any LTL formula φ can be converted into various automata, namely finite state machines that recognize all words satisfying φ. We define a generalized Büchi automaton at the beginning, and then introduce a limit-deterministic Büchi automaton.

A transition-based generalized Büchi automaton (tGBA) is a tuple B=(X, xinit, Σ, δ, F), where X is a finite set of states, xinit∈X is the initial state, Σ is an input alphabet, δ⊂X×Σ×X is a set of transitions, and F={F1,…,Fn} is an acceptance condition, where for each j∈{1,…,n}, Fj⊂δ is a set of accepting transitions and called an accepting set.

A tLDBA is a tGBA whose state set can be partitioned into the initial part Xinitial and the final part Xfinal, and they are connected by a single “guess”. The final part has all accepting sets. The transitions in each part are deterministic. It is known that, for any LTL formula φ, there exists a tLDBA that accepts all words satisfying φ [13]. In particular, we represent a tLGBA recognizing an LTL formula φ as Bφ, whose input alphabet is given by Σ=2AP.

Given an augmented tLDBA ¯Bφ and an MDP M, a tuple M⊗¯Bφ=M⊗=(S⊗,A⊗,A⊗,s⊗init,P⊗,δ⊗,F⊗) is a product MDP, where S⊗=S×¯X is the finite set of states, A⊗=A is the finite set of actions, A⊗:S⊗→2A⊗ is the mapping defined as A⊗((s,¯x))=A(s), s⊗init=(sinit,¯xinit) is the initial states, P⊗:S⊗×S⊗×A⊗→[0,1] is the transition probability defined as

The reward function is defined as

where rp is a positive value.

Under the product MDP M⊗ and the reward function R, which is based on the acceptance condition of M⊗, we show that if there exists a positional policy π satisfying the LTL specification φ, maximizing the expected discounted reward produces a policy satisfying φ.

For any policy π and any recurrent class R⊗iπ in the Markov chain MC⊗π, MC⊗π satisfies one of the following conditions.

where pk((s⊗,a,s⊗′),(s⊗,a,s⊗′)) is the probability that the transition (s⊗,a,s⊗′) occurs again after the occurrence of itself in k time steps. Eq. (1) means that the agent obtains a reward infinitely often. This contradicts the definition of the acceptance condition of the product MDP M⊗.

Suppose that π∗ is an optimal policy but does not satisfy the LTL formula φ. Then, for any recurrent class R⊗iπ∗ in the Markov chain MC⊗π∗ and any accepting set ¯F⊗j of the product MDP M⊗, δ⊗π∗,i∩¯F⊗j=∅ holds by Lemma 1. Thus, the agent under the policy π∗ can obtain rewards only in the set of transient states. We consider the best scenario in the assumption. Let pk(s,s′) be the probability of going to a state s′ in k time steps after leaving the state s, and let Post(T⊗π∗) be the set of states in recurrent classes that can be transitioned from states in T⊗π∗ by one action. For the initial state s⊗init in the set of transient states, it holds that

The results contradict the optimality assumption of π∗.