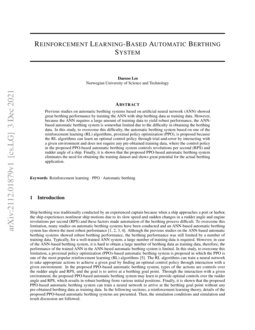 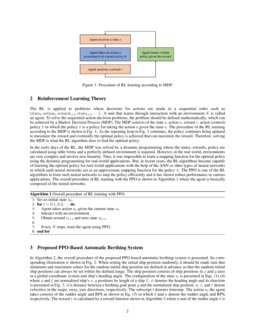 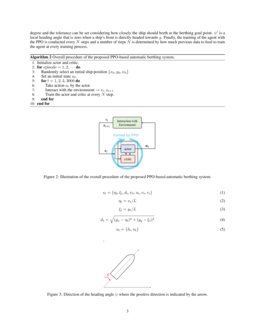 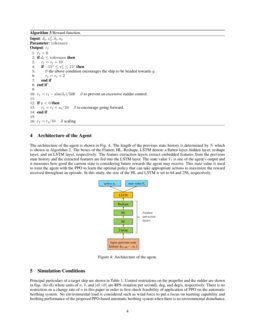 With the rapid advance of information technology, network systems have b...
Bai Liu, et al. ∙

With the increasing power of computers and the rapid development of self...
Haoqian Li, et al. ∙

The past decade has seen the rapid development of Reinforcement Learning...
Qi Yang, et al. ∙

The RL is applied to problems where decisions for actions are made in a sequential order such as (statet,actiont,rewardt+1,statet+1,⋯). A unit that learns through interaction with an environment E

is called an agent. To solve the sequential-action-decision problems, the problem should be defined mathematically, which can be achieved by a Markov Decision Process (MDP). The MDP consists of the state

s, action a, reward r, action (control) policy π in which the policy π is a policy for taking the action a given the state s. The procedure of the RL training according to the MDP is shown in Fig. 1. As the repeating loop in Fig. 1 continues, the policy continues being updated to maximize the reward and eventually the optimal policy is achieved that can maximize the reward. Therefore, solving the MDP is what the RL algorithm does to find the optimal policy.

In the early days of the RL, the MDP was solved by a dynamic programming where the states, rewards, policy are calculated using table forms and a perfectly defined environment is required. However, in the real world, environments are very complex and involve non-linearity. Thus, it was impossible to learn a mapping function for the optimal policy using the dynamic programming for real-world applications. But, in recent years, the RL algorithms became capable of learning the optimal policy for real-world applications with the help of the ANN or other types of neural networks in which such neural networks act as an approximate mapping function for the policy π. The PPO is one of the RL algorithms to train such neural networks to map the policy efficiently and it has shown robust performance in various applications. The overall procedure of RL training with the PPO is shown in Algorithm 1 where the agent is basically composed of the neural networks.

In Algorithm 2, the overall procedure of the proposed PPO-based automatic berthing system is presented. Its corresponding illustration is shown in Fig. 2. When setting the initial ship position randomly, it should be made sure that minimum and maximum values for the random-initial ship position are defined in advance so that the random-initial ship positions can always be set within the defined range. The ship position consists of ship positions in x and y axes in a global coordinate system and ship’s heading angle. The configuration of the state st is presented in Eqs. (1)-(4) where η and ξ are normalized ship’s x, y positions by length of a ship L. ψ denotes the heading angle and its direction is presented in Fig. 3. d is distance between a berthing goal point g and the normalized ship position. u, v, and r denote velocities in the surge, sway, yaw directions, respectively. The subscript t denotes timestep. The action at the agent takes consists of the rudder angle and RPS as shown in Eq. (5) in which δ and n denote the rudder angle and RPS, respectively. The reward r is calculated by a reward function shown in Algorithm 3 where a unit of the rudder angle δ is degree and the tolerance can be set considering how closely the ship should berth at the berthing goal point. ψ′ is a local heading angle that is zero when a ship’s front is directly headed towards g. Finally, the training of the agent with the PPO is conducted every N steps and a number of steps N is determined by how much previous data to feed to train the agent at every training process.

4 Architecture of the Agent

The architecture of the agent is shown in Fig. 4. The length of the previous state history is determined by N which is shown in Algorithm 2

. The boxes of the Flatten, HL, Reshape, LSTM denote a flatten layer, hidden layer, reshape layer, and an LSTM layer, respectively. The feature extraction layers extract embedded features from the previous state history and the extracted features are fed into the LSTM layer. The state value

Vt is one of the agent’s output and it measures how good the current state is considering future rewards the agent may receive. This state value is used to train the agent with the PPO to learn the optimal policy that can take appropriate actions to maximize the reward received throughout an episode. In this study, the size of the HL and LSTM is set to 64 and 256, respectively.

Principal particulars of a target ship are shown in Table 1. Control restrictions on the propeller and the rudder are shown in Eqs. (6)-(8) where units of n, δ, and |dδ/dt| are RPS (rotation per second), deg, and deg/s, respectively. There is no restriction on a change rate of n in this paper in order to first check feasibility of application of PPO on the automatic berthing system. No environmental load is considered such as wind force to put a focus on learning capability and berthing performance of the proposed PPO-based automatic berthing system when there is no environmental disturbance. The ranges of the random-initial ship positions η0, ξ0, and ψ0 in Algorithm 2 are presented in Eqs. (9)-(11) where the subscript 0 denotes a timestep of zero. The initial heading angle ψ0

is set to 128. The hyperparameter settings from the original PPO paper are used with a bit of change.

7 shows that the berthing control is successful and robust even for the initial ship positions that are outside of the training initial ship position range, which can be viewed as control starting from the extrapolated range. Therefore, it can be argued that PPO can learn the optimal control policy that is generic enough to perform well even in extrapolated situations, and the further study is encouraged to be conducted with the additional restriction on n and environmental load.

Code for the simulation is available here111https://github.com/danelee2601/RL-based-automatic-berthing. In the GitHub repository, a link to the Google Colab is available where you can run the berthing simulation with the pre-trained model by the PPO. There, you can try various initial ship positions and would be able to see the robustness of the PPO-based automatic berthing system.