Context gates are effective to control the contributions from the source and target contexts in the recurrent neural network (RNN) based neural machine translation (NMT). However, it is challenging to extend them into the advanced Transformer architecture, which is more complicated than RNN. This paper first provides a method to identify source and target contexts and then introduce a gate mechanism to control the source and target contributions in Transformer. In addition, to further reduce the bias problem in the gate mechanism, this paper proposes a regularization method to guide the learning of the gates with supervision automatically generated using pointwise mutual information. Extensive experiments on 4 translation datasets demonstrate that the proposed model obtains an averaged gain of 1.0 BLEU score over strong Transformer baseline. 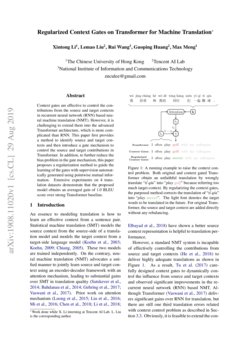 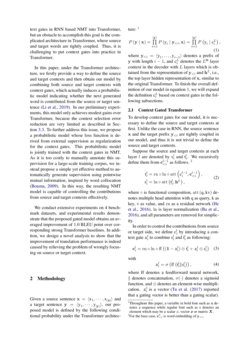 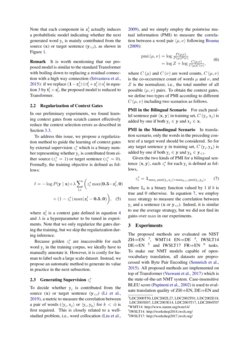 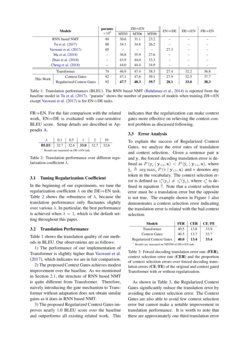 An essence to modeling translation is how to learn an effective context from a sentence pair. Statistical machine translation (SMT) models the source context from the source-side of a translation model and models the target context from a target-side language model koehn2003statistical; koehn2009statistical; chiang2005hierarchical. These two models are trained independently. On the contrary, neural machine translation (NMT) advocates a unified manner to jointly learn source and target context using an encoder-decoder framework with an attention mechanism, leading to substantial gains over SMT in translation quality sutskever2014sequence; bahdanau2014neural; gehring2017convolutional; vaswani2017attention. Prior work on attention mechanism (luong2015effective; liu2016neural; mi2016supervised; chen2018syntax; li2018target; elbayad2018pervasive) have shown a better source context representation is helpful to translation performance.

However, a standard NMT system is incapable of effectively controlling the contributions from source and target contexts (he2018layer) to deliver highly adequate translations as shown in Figure 1. As a result, tu2017context carefully designed context gates to dynamically control the influence from source and target contexts and observed significant improvements in the recurrent neural network (RNN) based NMT. Although Transformer vaswani2017attention delivers significant gains over RNN for translation, but there are still one third translation errors related with context control problem as described in Section 3.3. Obviously, it is feasible to extend the context gates in RNN based NMT into Transformer, but an obstacle to accomplish this goal is the complicated architecture in Transformer, where source and target words are tightly coupled. Thus, it is challenging to put context gates into practice in Transformer.

In this paper, under the Transformer architecture, we firstly provide a way to define the source and target contexts and then obtain our model by combining both source and target contexts with context gates, which actually induces a probabilistic model indicating whether the next generated word is contributed from the source or target sentence (li2019word). In our preliminary experiments, this model only achieves modest gains over Transformer, because the context selection error reduction are very limited as described in Section 3.3

. To further address this issue, we propose a probabilistic model whose loss function is derived from external supervision as regularization for the context gates. This probabilistic model is jointly trained with the context gates in NMT. As it is too costly to manually annotate this supervision for a large-scale training corpus, we instead propose a simple yet effective method to automatically generate supervision using pointwise mutual information, inspired by word collocation

bouma2009normalized. In this way, the resulting NMT model is capable of controlling the contributions from source and target contexts effectively.

We conduct extensive experiments on 4 benchmark datasets, and experimental results demonstrate that the proposed gated model obtains an averaged improvement of 1.0 BLEU point over corresponding strong Transformer baselines. In addition, we design a novel analysis to show that the improvement of translation performance is indeed caused by relieving the problem of wrongly focusing on source or target context.

Given a source sentence x=⟨x1,⋯,x|x|⟩ and a target sentence y=⟨y1,⋯,y|y|⟩

, our proposed model is defined by the following conditional probability under the Transformer architecture:

where y<i=⟨y1,…,yi−1⟩ denotes a prefix of y with length i−1, and cLi denotes the Lth layer context in the decoder with L layers which is obtained from the representation of y<i and hL

x, similar to the original Transformer. To finish the overall definition of our model in equation 1, we will expand the definition cLi based on context gates in the following subsections.

Suppose the source and target contexts at each layer l are denoted by sli and tli. We recursively define them from cl−1<i as follows. 222For the base case, c0<i is word embedding of y<i.

where ∘ is functional composition, att(q,kv) denotes multiple head attention with q as query, k as key, v as value, and rn as a residual network he2016deep, ln is layer normalization ba2016layer, and all parameters are removed for simplicity.

In order to control the contributions from source or target side, we define cli by introducing a context gate zli to combine sli and tli as following:

denotes a sigmoid function, and

⊗ denotes an element-wise multiplication. zli is a vector (tu2017context reported that a gating vector is better than a gating scalar). Note that each component in zli actually induces a probabilistic model indicating whether the next generated word yi is mainly contributed from the source (x) or target sentence (y<i), as shown in Figure 1.

(srivastava2015highway): if we replace (1−zli)⊗tli+zli⊗sli in equation 3 by tli+sli, the proposed model is reduced to Transformer.

In our preliminary experiments, we found learning context gates from scratch cannot effectively reduce the context selection errors as described in Section 3.3.

To address this issue, we propose a regularization method to guide the learning of context gates by external supervision z∗i which is a binary number representing whether yi is contributed from either source (z∗i=1) or target sentence (z∗i=0). Formally, the training objective is defined as follows:

is a hyperparameter to be tuned in experiments. Note that we only regularize the gates during the training, but we skip the regularization during inference.

Because golden z∗i are inaccessible for each word yi in the training corpus, we ideally have to manually annotate it. However, it is costly for human to label such a large scale dataset. Instead, we propose an automatic method to generate its value in practice in the next subsection.

To decide whether yi is contributed from the source (x) or target sentence (y<i) (li2019word), a metric to measure the correlation between a pair of words (⟨yi,xj⟩ or ⟨yi,yk⟩ for k<i) is first required. This is closely related to a well-studied problem, i.e., word collocation liu2009collocation, and we simply employ the pointwise mutual information (PMI) to measure the correlation between a word pair ⟨μ,ν⟩ following bouma2009normalized:

where C(μ) and C(ν) are word counts, C(μ,ν) is the co-occurrence count of words μ and ν, and Z is the normalizer, i.e., the total number of all possible (μ,ν) pairs. To obtain the context gates, we define two types of PMI according to different C(μ,ν) including two scenarios as follows.

PMI in the Bilingual Scenario

PMI in the Monolingual Scenario

In translation scenario, only the words in the preceding context of a target word should be considered. So for any target sentence y in training set, C(yi,yk) is added by one if both yi∈y and yk∈y<i.

Given the two kinds of PMI for a bilingual sentence ⟨x,y⟩, each z∗i for each yi is defined as follows,

where 1b is a binary function valued by 1 if b is true and 0 otherwise. In equation 7, we employ max strategy to measure the correlation between yi and a sentence (x or y<i). Indeed, it is similar to use the average strategy, but we did not find its gains over max in our experiments.

In the beginning of our experiments, we tune the regularization coefficient λ on the DE⇒EN task. Table 2 shows the robustness of λ, because the translation performance only fluctuates slightly over various λ. In particular, the best performance is achieved when λ=1, which is the default setting throughout this paper.

Table 1 shows the translation quality of our methods in BLEU. Our observations are as follows:

1) The performance of our implementation of Transformer is slightly higher than vaswani2017attention, which indicates we are in fair comparison.

2) The proposed Context Gates achieves modest improvement over the baseline. As we mentioned in Section 2.1, the structure of RNN based NMT is quite different from Transformer. Therefore, naively introducing the gate mechanism to Transformer without adaptation does not obtain similar gains as it does in RNN based NMT.

3) The proposed Regularized Context Gates improves nearly 1.0 BLEU score over the baseline and outperforms all existing related work. This indicates that the regularization can make context gates more effective on relieving the context control problem as discussed following.

Appendix A Details of Data and Implementation

The training data for ZH⇒EN task consists of 1.8M sentence pairs. The development set is chosen as NIST02 and test sets are NIST05, 06, 08. For EN⇒DE task, its training data contains 4.6M sentences pairs. Both FR⇒EN and DE⇒EN tasks contain around 0.2M sentence pairs. For ZH⇒EN and EN⇒DE tasks, the joint vocabulary is built with 32K BPE merge operations, and for DE⇒EN and FR⇒EN tasks it is built with 16K merge operations.

Our implementation of context gates and the regularization are based on Transformer, implemented by THUMT (zhang2017thumt). For ZH⇒EN and EN⇒DE tasks, only the sentences of length up to 256 tokens are used with no more than 215 tokens in a batch. The dimension of both word embeddings and hidden size are 512. Both encoder and decoder have 6 layers and adopt multi-head attention with 8 heads. For FR⇒EN and DE⇒EN tasks, we use a smaller model with 4 layers and 4 heads, and both the embedding size and the hidden size is 256. The training batch contains no more than 212 tokens. For all tasks, the beam size for decoding is 4, and the loss function is optimized with Adam, where β1=0.9, β2=0.98 and ϵ=10−9.

Appendix B Statistics of Context Gates

Table 4 summarizes the mean and variance of each context gate (every dimension of the context gate vectors) over the NIST08 test set. It shows that learning context gates freely from scratch tends to pay more attention to target context (0.38 < 0.5), which means the model tends to trust its language model more than the source context, and we call this context imbalance bias of the freely learned context gate. Specifically this bias will make the translation unfaithful for some source tokens. As shown in Table 4, the Regularized Context Gates demonstrates more balanced behavior (0.51≈0.5) over source and target context with similar variance.

To investigate the sensitivity of choosing different layers for regularization, we only regularize context gate in each single layer. Table 5 shows that there is no significant performance difference, but all single layer regularized context gate models are slightly inferior to the model which regularizes all the gates. Moreover, since nearly no computation overhead is introduced and for design simplicity, we adopt regularizing all the layers.