For the first time, a nonlinear interface problem on an unbounded domain with nonmonotone set-valued transmission conditions is analyzed. The investigated problem involves a nonlinear monotone partial differential equation in the interior domain and the Laplacian in the exterior domain. Such a scalar interface problem models nonmonotone frictional contact of elastic infinite media. The variational formulation of the interface problem leads to a hemivariational inequality, which lives on the unbounded domain, and so cannot be treated numerically in a direct way. By boundary integral methods the problem is transformed and a novel hemivariational inequality (HVI) is obtained that lives on the interior domain and on the coupling boundary, only. Thus for discretization the coupling of finite elements and boundary elements is the method of choice. In addition smoothing techniques of nondifferentiable optimization are adapted and the nonsmooth part in the HVI is regularized. Thus we reduce the original variational problem to a finite dimensional problem that can be solved by standard optimization tools. We establish not only convergence results for the total approximation procedure, but also an asymptotic error estimate for the regularized HVI. 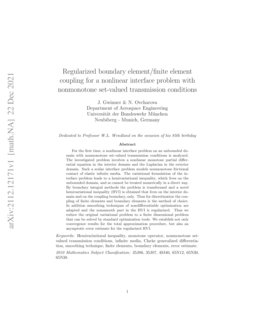 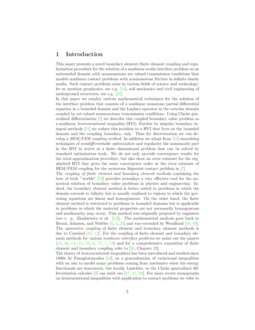 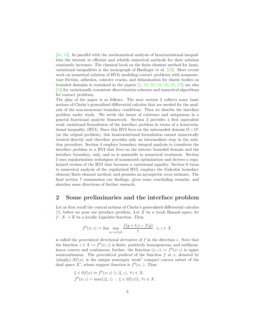 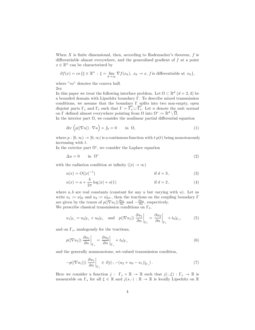 In this paper we design and analyze an explicit partitioned procedure fo...
Huaiqian You, et al. ∙

In this paper we employ various mathematical techniques for the solution of the interface problem that consists of a nonlinear monotone partial differential equation in a bounded domain and the Laplace operator in the exterior domain coupled by set-valued nonmonotone transmission conditions. Using Clarke generalized differentiation [9] we describe this coupled boundary value problem as a nonlinear hemivariational inequality (HVI). Further by singular boundary integral methods [31] we reduce this problem to a HVI that lives on the bounded domain and the coupling boundary, only. Thus for discretization we can develop a BEM/FEM coupling method. In addition we adapt from [42] smoothing techniques of nondifferentiable optimization and regularize the nonsmooth part in the HVI to arrive at a finite dimensional problem that can be solved by standard optimization tools. We do not only provide convergence results for the total approximation procedure, but also show an error estimate for the regularized HVI that gives the same convergence order as the error estimate of BEM/FEM coupling for the monotone Signorini contact problem in [7].

The plan of the paper is as follows. The next section 2 collects some basic notions of Clarke’s generalized differential calculus that are needed for the analysis of the non-monotone boundary conditions. Then we descibe the interface problem under study. We settle the issues of existence and uniqueness in a general functional analytic framework. Section 3 provides a first equivalent weak variational formulation of the interface problem in terms of a hemivariational inequality (HVI). Since this HVI lives on the unbounded domain Ω×Ωc (as the orignal problem), this hemivariational formulation cannot numerically treated directly and therefore provides only an intermediate step in the solution procedure. Section 4 employs boundary integral analysis to transform the interface problem to a HVI that lives on the interior bounded domain and the interface boundary, only, and so is amenable to numerical treatment. Section 5 uses regularization techniques of nonsmooth optimization and derives a regularized version of the HVI that becomes a variational equality. Section 6 turns to numerical analysis of the regularized HVI, employs the Galerkin boundary element/finite element method, and presents an asymptotic error estimate. The final section 7 summarizes our findings, gives some concluding remarks, and sketches some directions of further research.

2 Some preliminaries and the interface problem

Let us first recall the central notions of Clarke’s generalized differential calculus [9], before we pose our interface problem. Let X be a (real) Banach space, let f:X→R be a locally Lipschitz function. Then

is called the generalized directional derivative of f in the direction z. Note that the function z∈X↦f0(x;z) is finite, positively homogeneous, and sublinear, hence convex and continuous; further, the function (x,z)↦f0(x;z) is upper semicontinuous. The generalized gradient of the function f at x, denoted by (simply) ∂f(x), is the unique nonempty weak∗ compact convex subset of the dual space X′, whose support function is f0(x;.). Thus

When X is finite dimensional, then, according to Rademacher’s theorem, f is differentiable almost everywhere, and the generalized gradient of f at a point x∈Rn can be characterized by

In this paper we treat the following interface problem. Let Ω⊂Rd (d=2,3) be a bounded domain with Lipschitz boundary Γ. To describe mixed transmission conditions, we assume that the boundary Γ splits into two non-empty, open disjoint parts Γs and Γt such that Γ=¯¯¯¯¯Γs∪¯¯¯¯¯Γt. Let n denote the unit normal on Γ defined almost everywhere pointing from Ω into Ωc:=Rd∖¯¯¯¯Ω.

In the interior part Ω, we consider the nonlinear partial differential equation

where p:[0,∞)→[0,∞) is a continuous function with t⋅p(t) being monotonously increasing with t.

In the exterior part Ωc, we consider the Laplace equation

with the radiation condition at infinity (|x|→∞)

where a,b are real constants (constant for any u but varying with u). Let us write u1:=u|Ω and u2:=u|Ωc, then the tractions on the coupling boundary Γ are given by the traces of p(|∇u1|)∂u1∂n and −∂u2∂n, respectively.

and on Γs, analogously for the tractions,

Further, we require the following growth condition on the so-called superpotential j: There exist positive constants c3 and c4 such that for a.a. s∈Γs, all ξ∈R and for all η∈∂j(s,ξ) the following inequalities hold

To conclude this section, we now discuss the existence and uniqueness of a weak solution to this interface problem in functional analytic terms. To this end, let X:=L2(Γs) and introduce the real-valued locally Lipschitz functional

As we shall see in the subsequent sections, the weak formulation of the problem (1)–(7) leads, in an abstract setting, to a hemivariational inequality (HVI) with a nonlinear operator A and the nonsmooth functional J, namely, we are looking for some ^v∈C such that

Here C≠∅ is a closed convex subset of a Banach space E, the nonlinear operator A:E→E∗ is a monotone operator, and γ:=γE→X denotes the linear continuous trace operator, and the linear form λ belongs to the dual E∗. Similar to [7], the operator A consists of a nonlinear monotone differential operator (as made precise below) that results from the PDE (1) in the bounded domain Ω and the positive definite Poincaré–Steklov operator on the boundary Γ of Ω that stems from the exterior problem (2)-(4) and can be represented by the boundary integral operators of potential theory. Thus it results that the operator A is strongly monotone with some monotonicity constant cA>0 and Lipschitz continuous on bounded sets. On the other hand, by the compactness of the trace map γ, the real-valued upper semicontinuous bifunction

Further suppose that the generalized directional derivative J0 satisfies the one-sided Lipschitz condition: There exists cJ>0 such that

Then the smallness condition

It is noteworthy that under the smallness condition (11) together with (10), fixed point arguments [6] or the theory of set-valued pseudo-monotone operators [45] are not needed, but simpler monotonicity arguments are sufficient to conclude unique solvability. Thus the compactness of the trace map γ is not needed either. In fact, (9) can be framed as a monotone equilibrium problem in the sense of Blum-Oettli [3]. and so the fundamental existence result [3, Theorem 1] directly applies in view of the following

Proof. Obviously φ vanishes on the diagonal and is convex and lower semicontinuous with respect to the second variable. To show (strict) monotonicity, estimate

3 An intermediate HVI formulation of the interface problem

is finite for any u∈H1(Ω) and strictly convex. The Frechet derivative of G,

and then the affine, hence convex set of admissible functions

Now we are in the position to pose the hemivariational inequality problem (PΦ): Find (^u1,^u2)∈C such that for all (u1,u2)∈C we have

Proof. First, taking into account the definition of the generalized gradient, we note that

Since η is arbitrary on Γ, we obtain

4 The boundary/domain HVI formulation of the interface problem

In this section we first briefly recall from [11, 31, 26] some boundary integral operator theory associated to the Laplace equation and then employ it to rewrite the exterior problem (2) - (4) as a boundary variational inequality on Γ. As a result we arrive at an equivalent hemivariational formulation of the original interface problem (1) - (7) that lives on Ω×Γ and consists of a weak formulation of the nonlinear differential operator in the bounded domain Ω, the Poincare-Stéklov operator on the bounded boundary Γ, and a nonsmooth functional on the boundary part Γs.

Given u2∈L0, its Cauchy data on Γ are

With the fundamental solution for the Laplacian,

Note that (20) determines u2 in Ωc as far as one knows its Cauchy data on Γ.

maps H1/2(Γ) continuously into its dual space H−1/2(Γ) and the bilinear form ⟨Su,u⟩ is positive definite (provided that the capacity of Γ is smaller than 1), i.e., there exists a constant cS>0 such that

where ⟨⋅,⋅⟩ extends the L2 duality on Γ.

Moreover, in case d=2, similarly to [7], we introduce an additional linear constraint and consider the affine closed subspace

Now we show the equivalence of problems (PΦ) and (PA).

To this end we observe that due to the properties of the Poincaré–Steklov operator,